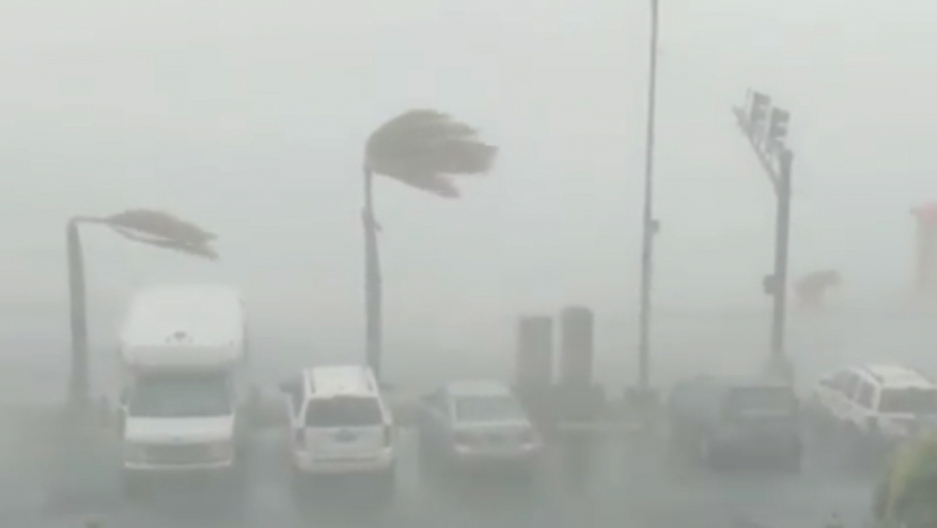 US President Donald Trump called Puerto Rico "one of the most corrupt places on earth" in a swipe at the US territory's leaders as they prepared for Tropical Storm Dorian, which became a hurricane on Wednesday and headed for the island.

Dorian gathered strength over the US Virgin Islands to become a Category 1 hurricane, and is expected to hit eastern Puerto Rico with heavy wind and rain.

Puerto Rico is still struggling to recover from back-to-back hurricanes in 2017, which killed about 3,000 people just months after it filed for bankruptcy.

Dorian is approaching Puerto Rico from the southeast, although it is blowing winds considerably less powerful than when Hurricane Maria hit the island in September 2017.

However, by the time Dorian hits Florida late on Sunday or Monday, it could be a major hurricane, according to the Miami-based National Hurricane Center (NHC).

After approving an emergency declaration for Puerto Rico late on Tuesday, Trump took a swipe at the US territory in a tweet on Wednesday morning.

"Puerto Rico is one of the most corrupt places on earth. Their political system is broken and their politicians are either Incompetent or Corrupt. Congress approved Billions of Dollars last time, more than anyplace else has ever gotten, and it is sent to Crooked Pols. No good!" Trump wrote.

Related: Puerto Rico has not recovered from Hurricane Maria

Trump has a history of disputes with Puerto Rico's leaders. He was heavily criticized for a tepid response to the 2017 hurricanes that battered Puerto Rico.

This week, Democrats in the US Congress also slammed Trump for shifting $271 million earmarked for disaster aid and cyber security to pay for detention facilities and courts for migrants arriving at the US-Mexico border.

House of Representatives Speaker Nancy Pelosi, a Democrat, on Tuesday described the shift as "stealing from appropriated funds."

The World's Carol Hill, speaks with Fernando Padilla, director of the project management office at Puerto Rico Electric Power Authority (PREPA), about the restoration effort and the islands' infrastructure needs.

Carol Hills: The islands of Vieques and Culebra — they're expected to be hit hardest by the storm. In Vieques it took 11 months for power to be restored after Maria. How have you prepared there for Tropical Storm Dorian?

Fernando Padilla: We've prepared on various fronts — I mean, the island condition just makes it slightly challenging. Everything has to be transported either by air or by water. But one key aspect has been that we have security infrastructure for the undersea cable that goes from the east side of Puerto Rico heading into Vieques ... I can also state that we do have a stronger infrastructure [now] than compared to when Maria happened, and then, in second instance, we do have generators available to quickly install for the longer term. We also have on-island generators that would bring the system [back on] within hours of a direct impact.

Now two years after Maria — under blue sky conditions — there are still daily power outages in some parts of Puerto Rico and weekly outages in others. Is the power infrastructure really ready for another storm?

We have a stable system, but it's still unreliable. We still have old conditions. It's still old infrastructure. And again, what happened during the restoration for Maria was basically bring up the lines slightly at the levels [of] old conditions, prior to the hit ... We are pursuing $2 billion from FEMA in order to begin hardening what are the critical loads and the critical areas of the island, such as hospitals, airports, water and sewage power pumps — key infrastructure for our main industries, security branches of the government, and also the south east side of Puerto Rico, where 90% of storms and hurricanes enter on the island.

But of course those things aren't going to be in place by the time the storm hits. Those are simply for infrastructural things that are in process ...

Do you feel like you have enough support and assistance from the federal government in Washington in terms of money supplies or anything else?

Yes — I mean, we've been working very closely with FEMA. They are prepared and they do have the resources and electrical equipment we would need from them. So we are essentially prepared, in partnership with FEMA and also with the US Corps of Engineers.