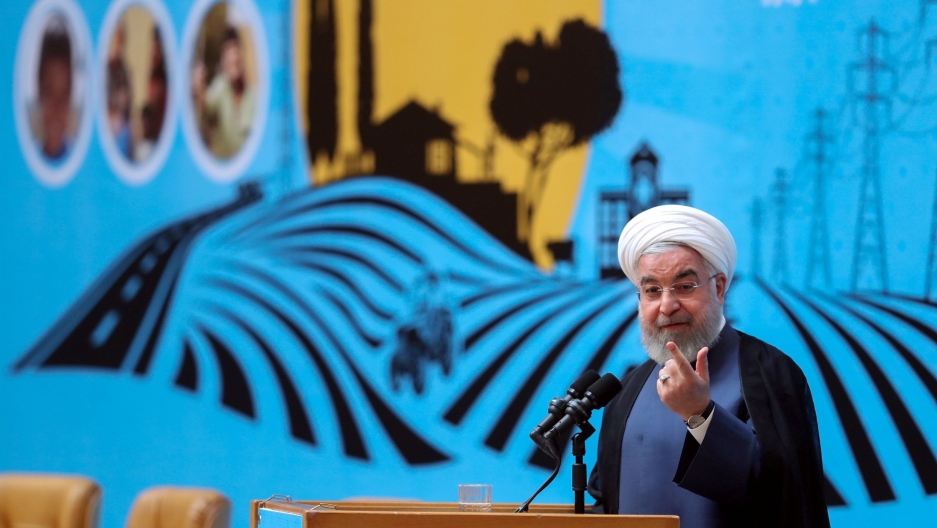 Iranian President Hassan Rouhani gestures as he delivers a speech during the Conference of Government’s Achievements in Developing Rural Infrastructure in Tehran, Iran, Aug. 26, 2019.

Iran will not talk to the United States until all sanctions imposed on Tehran are lifted, President Hassan Rouhani said on Tuesday, a day after President Donald Trump said he would meet his Iranian counterpart to try to end a nuclear standoff.

Trump said on Monday he would meet Iran's president under the right circumstances to end a confrontation that began when Washington pulled out of Tehran's 2015 nuclear deal with six powers and reimposed sanctions on the country. Trump also said talks were underway to see how countries could open credit lines to keep Iran's economy afloat.

Related: Iranian students in US scramble as sanctions ratchet up tuition costs

Rouhani said Iran was always ready to hold talks. "But first, the US should act by lifting all illegal, unjust and unfair sanctions imposed on Iran," he said in a speech broadcast live on state TV.

Speaking at a G7 summit in the French resort of Biarritz, Trump ruled out lifting economic sanctions to compensate for losses suffered by Iran.

European parties to the deal have struggled to calm the deepening confrontation between Iran and the United States since Trump pulled Washington out last year. French President Emmanuel Macron has led efforts to defuse tensions, and Iranian Foreign Minister Mohammad Javad Zarif flew in to the Biarritz G7 meeting unexpectedly on Sunday for side talks with French officials.

Since ditching the deal last year, Trump has pursued a policy of “maximum pressure” to try to force Iran into broader talks to restrict its ballistic missile program and end its support for proxy forces around the Middle East.

Gérard Araud is a veteran French diplomat who served as France's ambassador to Israel, the UN and most recently to the US from 2014 until earlier this year. He spoke with The World's host Marco Werman about what the state of affairs means for France and other US allies still in the Iran nuclear deal.

Emmanuel Macron seems heavily invested in brokering this meeting between Trump and Rouhani. Why do you think that is?

You know, actually President Macron has been on the phone for several weeks calling Rouhani and calling President Trump because here we have this extreme tension in the Persian Gulf, which means that any incident could lead to a military confrontation. But at the same time, Macron is convinced that Trump doesn't want war. So, he has been really trying to mediate for some time, and whether it will succeed or not, nobody knows. But I think that it's worth taking the risk.

So, what are the chances, do you think, that Trump would lift sanctions in order to sit down with Rouhani?

You know, on the French side — the idea was not lifting the sanctions, but in a sense, having a waiver or suspending them for one month, two months or three months. And that on the American side sounded really conceivable. Donald Trump was not saying no. So, it would be a sort of deescalation leading to a negotiation with the Iranians. The problem that you have on the Iranian side — in Iran you have different circles of power — there is a deep mistrust toward Trump. I wouldn't bet everything I own on the success of President Macron. It's risky. But as I said, considering the stakes, I think it's worth trying.

And you don't think the US national security adviser, John Bolton, and Secretary of State Mike Pompeo in Trump's ear would keep some kind of waiver of the sanctions away for a month — would that stop it?

I think you are emphasizing a genuine point. You have a president who doesn't want war and who is ready to negotiate with the devil if necessary, as he has shown with North Korea. But his entourage, especially John Bolton, is much more on the regime-change-line. You know, with this administration, you have to be very careful because there is only one person who decides and this person is Donald Trump. That's the reason why Macron is talking directly to Trump.

So, let's imagine that the circumstances are right for a meeting between Trump and Rouhani. What is the best outcome, do you think, from a meeting like that?

You know, the best outcome would be first a deescalation of the tension in the Gulf. You know, you had these attacks against tankers. You had the deployment of Western ships to protect the tankers. Again, the radicals on both sides were looking for actually creating an incident. So, it will already be a first important step. And of course, this deescalation leading to the opening of a negotiation between the Americans and the Iranians.

And what would be the worst outcome?

Again, the worst outcome is really a meeting where nothing happens and everybody's going back home and there is an incident on the ground.