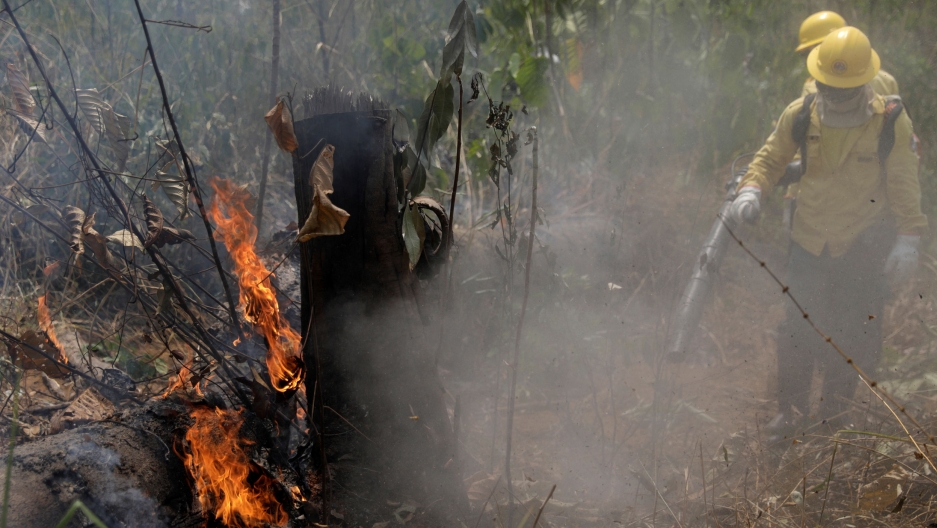 Firefighters extinguish a fire in Amazon jungle in Porto Velho, Brazil, on Aug. 25, 2019.

Weak rainfall is unlikely to extinguish a record number of fires raging in Brazil's Amazon anytime soon, with pockets of precipitation through Sept. 10 expected to bring only isolated relief, according to weather data and two experts.

The world's largest tropical rainforest is being ravaged as the number of blazes recorded across the Brazilian Amazon has risen 79% this year through Aug. 25, according to the country's space research agency.

The fires are not limited to Brazil, with at least 3,800 square miles burning in Bolivia near its borders with Paraguay and Brazil.

While Brazil's government has launched a firefighting initiative, deploying troops and military planes, those efforts will only extinguish smaller blazes and help prevent new fires, experts said. Larger infernos can only be put out by rainfall.

Meanwhile, leaders of the Group of Seven wealthy nations on Monday offered $20 million in emergency aid to help battle wildfires in the Amazon rainforest, a gesture Brazil slammed as colonialist.

Despite record wildfires in the Amazon and President Jair Bolsonaro previously saying his government lacked the money to fight the blazes, it was not clear if Brazil would accept the G7 offer amid growing international concern.

Major Commander Colonel Paulo Barroso, a firefighter who has been leading operations in Cuiabá, the capital of the central Brazilian state Mato Grosso, told The World's Marco Werman that his department is lacking the infrastructure to tackle fires of this scale.

Marco Werman: What did you see last time you were out battling the fires? How bad was it?

We have people, but we don't have the structure to go to the field. We have 141 cities and we have fire departments in 22 cities. The places we work, the cities we work, we can control most of the fires there, but in other cities, we don't have a team to fight the fires. We can't control them because we are not there.

So that means that you are extinguishing some fires, but other fires continue to grow?

Yes, because we cover a large territory. We have more than 903,000 square kilometers [349,000 square miles] to cover, and the fires happen almost at the same time. And, [we operate] in a difficult environment because we have few roads; we don't have airplanes, or even the basic equipment to distribute to our people to fight the forest fires. So all the fire departments — not only the Mato Grosso state military fire department — but all the fire departments of the Amazon need equipment. We need airships. We need a structure.

President Jairo Bolsonaro was offered assistance by the G7 and he did not readily accept it. I mean, wouldn't that have helped control these wildfires?

I don't know. I don't know why he did this, but we are receiving federal support from the army and the air force and other agencies. But it's more than this — I mean, I worry about what will happen in the future, next year, and the years ahead. We have to plan a structure for a forest fire protection system in the Amazon forest. But now we are fighting. We are doing what we can with what we have.