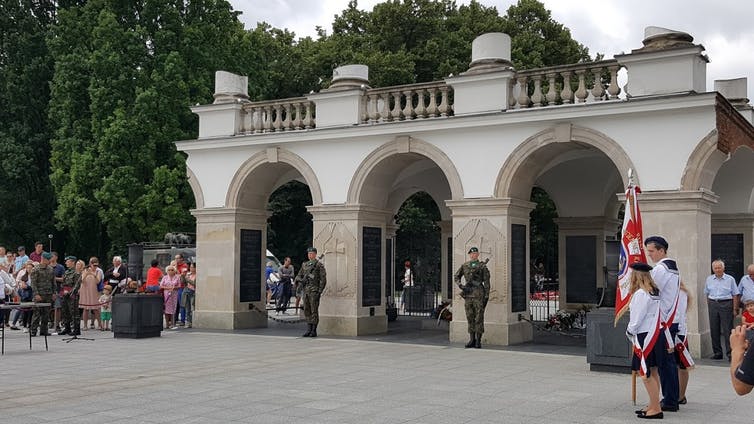 Tomb of the Unknown Soldier in Piłsudski Square, Warsaw.

Every year, Poland commemorates where World War II broke out on Sept. 1, 1939: the Baltic Sea coast peninsula of Westerplatte in Gdańsk in the precise spot and time, 4:45 a.m., where German ships opened fire on Poland.

It will be different this year.

For the 80th anniversary, Poland has changed the site of the usual commemoration ceremony from Westerplatte to Warsaw and, for the first time, has invited a US president to speak.

I am often in Warsaw. For the last four summers, I have been in Poland researching the ways Poland commemorates the past, and US presidents’ rhetoric in Poland.

The city of Gdańsk, where the ceremony was traditionally held, regards itself as a “melting pot.”

The national government is led by the nationalist Law and Justice Party (PiS). PiS is at odds with the policies and rhetoric of Gdańsk’s former and current mayors, Paweł Adamowicz and Aleksandra Dulkiewicz, as part of the PiS effort to shape history.

It seeks to nationalize what had been a locally created and controlled event.

PiS has made Westerplatte a contemporary battleground of memory. Over the last four years, its members have exerted pressure on museums, cultural sites and historians over the ways they present the past.

Gdańsk tells the story of the city’s past in a future-oriented way that marks it as a “European” city.

Mayor Adamowicz, murdered by someone who opposed his former political party on January 14, said during the 2018 ceremony that Westerplatte was where “the Poles first said no to aggression and trampling on human and divine rights.”

He had anticipated that the 80th anniversary would be held in Gdańsk.

But PiS has what I and other critics see as a restrictive and conspiratorial view of the past. Party leaders promote a narrative of Polish heroism, national unity and glory rooted in martyrdom. They reject connection with the rest of Europe.

PiS has complained that Westerplatte has experienced vandalism and litter. They assert Warsaw’s capital city status is the reason for moving the ceremony, or that the Polish soldiers’ bravery was not properly commemorated.

A change in location

This year, without consulting Mayor Dulkiewicz, Poland's President Andrzej Duda announced the WWII commemoration would be at Warsaw’s Piłsudski Square. PiS took land in Westerplatte without discussion on whether to do so; opposition members of Parliament were not allowed to vote on the issue.

Holding the commemoration at the site could draw attention to the illiberal and authoritarian right-wing perspectives, rather than Poland’s European identity. The square abounds with military buildings and symbols. PiS has been bringing nationalists into the mainstream.

Piłsudski Square sprawls. The military-guarded Tomb of the Unknown Soldier borders one end, parallel with trees from the Saxon Garden behind it. High-end stores, luxury hotels and international companies like McKinsey and Noble Bank flank the square.

The tomb looks out onto the white-granite Papal Cross and a pair of statues. One is a statue of Piłsudski. 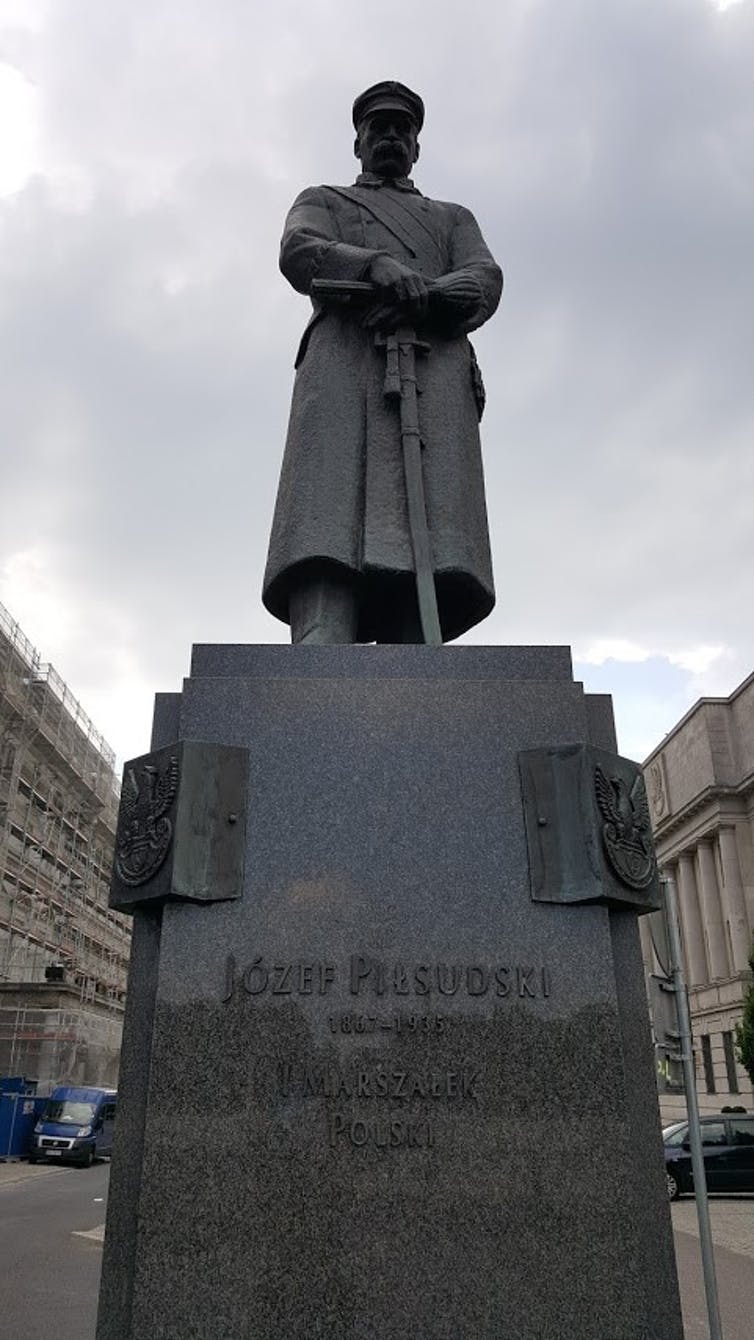 Statue of Józef Piłsudski, first marshal of Poland, in Warsaw.

The taller monument is of former Polish President Lech Kaczyński, in front of the Warsaw Garrison Command. To the right is a black stairway to the sky, a monument to the Smolensk Air Disaster, the airplane crash in which Kaczyński died in 2010.

His twin brother, Jarosław Kaczyński, the extremist leader of PiS, was responsible for adding the statue of his brother and of the stairway, and for using memory of historical traumas for political aims.

What will Trump say?

Breaking tradition twice, PiS asked President Donald Trump to speak, making him the first US president to address the ceremony.

When Trump spoke in Poland in 2017, he portrayed “the West” as a victim of the evils of others.

He spoke about what he perceives as a clash between “the West” and non-Westerners, saying, “The defense of the West ultimately rests not only on means but also on the will of its people to prevail,” and “The fundamental question of our time is whether the West has the will to survive.” Trump’s rhetoric is often in line with the PiS.

Trump and his audiences

The Polish government, desirous of US military support, welcomes nationalism and martyr imagery. Poland’s statues, monuments and buildings combine to create an image of a Poland that has suffered, with Kaczyński as a martyr.

Putin was not invited, but he will likely be listening.

Both Polish and American audiences may expect Trump to address Russian interventions in Poland and Ukraine.

Americans usually expect their presidents to speak of democracy and freedom, yet I think they will hear more of what rhetorician Jennifer R. Mercieca calls “weaponized communication,” the use of communication as an aggressive tool for compliance. 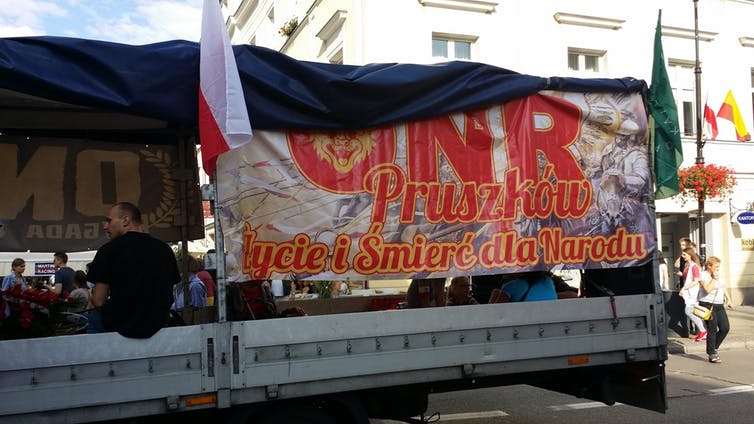 Although Polish people favor US leadership generally, their confidence in Trump’s ability to do the right thing falls sharply below their approval of Barack Obama, who sent 3,500 troops to Poland in early 2017, in a show of defense against Russia. This action met with Putin’s anger, who said of Poland, “It isn’t even a European country.”

Based on his prior rhetoric, I believe Trump will use the setting and stories of Polish victimhood in ways that fuel nationalism, rather than promote the ideals of pluralistic democracy.

Related: Legacy of communism hotly debated in Poland 30 years on

His insult to the memory of the Warsaw Uprising on its anniversary creates additional complexity. When a Polish journalist asked him for a message on the 75th anniversary of the Uprising, he responded with self-serving statements about what Poland will do for him.

His rhetoric poses challenges to his administration’s own attempts at diplomacy. Trump is not as popular in Poland as he believes, when he says, “people of Poland like me.”

With this anniversary event, Poland moves public memory from a city which welcomes diversity and tolerance to a largely barren square dotted with symbols of the military and nationalism. By straying from security through solidarity with Europe, this battle over sites of memory contributes to the fracturing that serves Putin’s interests.

Rebecca M. Townsend is an Assistant Professor of Communication at the University of Hartford.