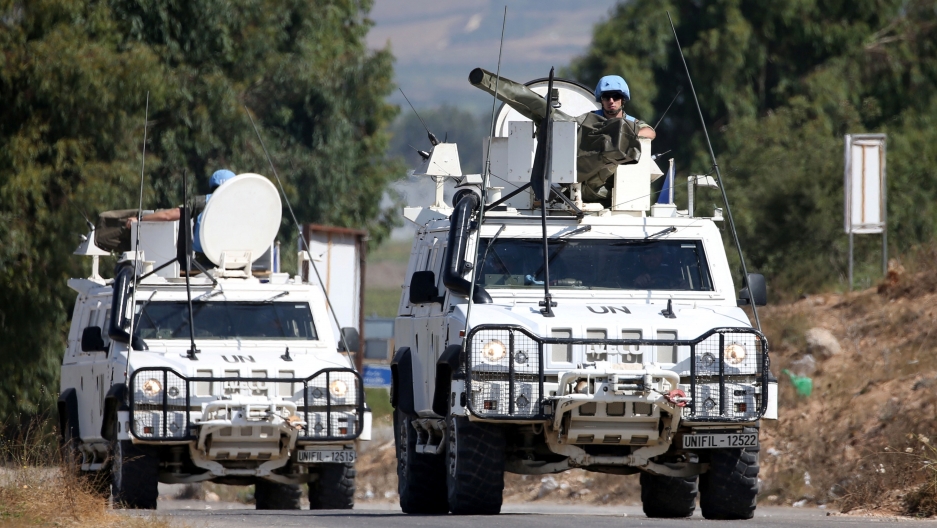 UN peacekeepers patrol the border with Israel, in the village of Khiam, Lebanon, Aug. 26, 2019.

Lebanese farmers and residents of Beirut suburbs hit by drones over the weekend vowed on Monday to stand their ground in the event of any Israeli attack, amid heightened tensions between the Iran-backed Hezbollah movement and Israel.

Two drones crashed on Sunday in Beirut's southern suburbs, which are dominated by the heavily armed Hezbollah, prompting the group to warn Israeli soldiers at the border to await a response. Lebanese President Michel Aoun on Monday likened the drone strikes to "a declaration of war."

Although Israel has not claimed responsibility for the Beirut attack, Hezbollah leader Sayyed Hassan Nasrallah described it as the first Israeli attack inside Lebanon since a one-month war his movement fought with Israel in 2006.

Meanwhile, Israeli troops on the northern border with Lebanon are on high alert because Hezbollah is threatening imminent military action.

Israel has carried out hundreds of airstrikes inside Syria since the civil war began there in 2011. But recent news reports point to Israeli involvement in attacks in Lebanon and in Iraq, as well.

Related: Iranian students in US bear the brunt of rising US-Iran tensions

Ehud Eiran is a professor of international relations at the University of Haifa in Israel. Eiran spoke with our host, Marco Werman, about what is happening in the region.

Marco Werman: What's going on here from Israel's perspective and do you see it as all part of the confrontation between Israel and Iran?

Ehud Eiran: Yes, Marco, you're absolutely correct that the fundamental fact is Israel's efforts to try and curb Iranian military buildup in the region. Israel views Iran as a threat. There's two other specific context to the escalation we're witnessing now. One is a political context: Israeli Prime Minister Benjamin Netanyahu is up for election on Sept. 17 and one of his biggest selling tickets is his image as "Mr. Security," the defender of Israel. There's also a military context. The Israeli Defense Force takes a disproportionate role in a military decision-making. So this is a multi-level game, if you will.

Let me ask you about the political context for a moment and Benjamin Netanyahu shoring up his "Mr. Security" bona fides. I mean there is that national election just a few weeks away. Are you worried about a "wag the dog" effect here, you know, that the attacks right now are politically motivated?

I don't believe they're fully politically motivated. There is general consensus in Israel, including among the opposition, that Iran is a threat. Moreover Prime Minister Netanyahu, contrary to his image, has been very careful in the use of military force. What he is doing is taking a consensual military effort and trying to leverage it as much as he can politically.

But why these attacks now? Isn't Iran the same essential threat to Israel it was last year?

There are two developments that indeed warrant closer look. One is the expansion of attacks to Iraq. Israel does not take full responsibility [for] these, by the way, so that's also another effort maybe not to create chaos in the region. The second attack which you referred to was in Lebanon. Here the details are not fully clear. It is something that was unprecedented. You're right, it's not exactly clear why now we're expanding to Iraq. One possibility is that Israel's effort to contain Iran in Syria had been generally successful. And so the Iranians are developing infrastructure in Iraq and Israel wants to expand there.

But even with Israel not claiming responsibility, I mean, the reports of Israeli airstrikes in Syria and Lebanon and Iraq — it all seems pretty provocative. Isn't Israel the aggressor here?

So this goes to how do you define aggression. It's true in first glance that Israel took the action in attack targets in the region. Seen from Israel, however, the slow buildup of Iranian military capabilities and support for its proxies in the region is the aggression, and therefore Israel is merely responding to an Iranian encroachment.

So a tantalizing little glimmer at the G7 today: Emmanuel Macron announcing that there could be a potential meeting between Iran and the US. What are all these reports of attacks by Israel across the Mideast — how will that sidetrack it and how will that impact US-Israeli relations?

So, in first glance, you know, it's a destabilizing component. This is an escalation between the armed conflict between Israel and Iran's proxies in the region in which Iranians get hurt from time to time. Iran may calculate that the deal with the US is more important, and therefore it will constrain any response by Hezbollah or any of its other allies. On the other hand, the US may see Israeli behavior is adding to the pressure on Iran in the context of its negotiations with Iran. We know [US] President [Donald] Trump is driven by a transactional approach. Finally, I would say Israel and especially its defense establishment are very close to the US and would be very careful to take any action that challenges or threatens American interests in the region.