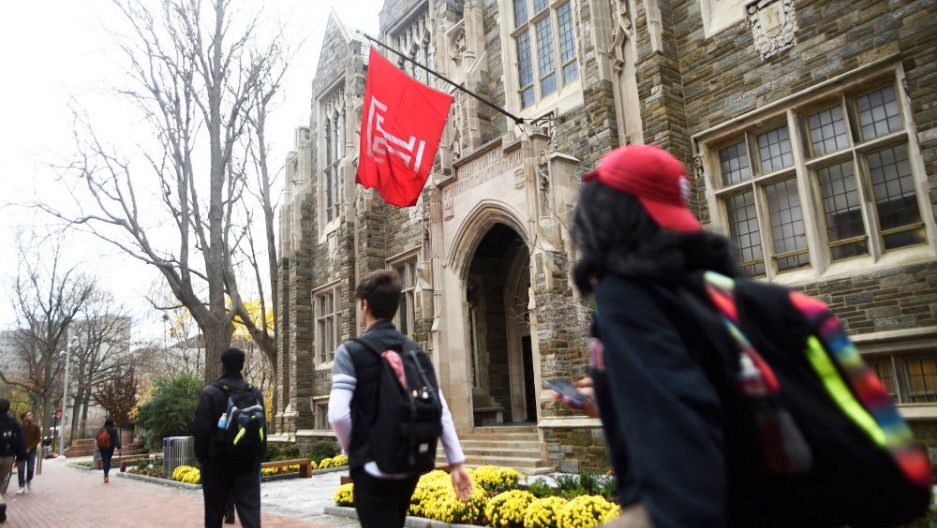 Students walk through the campus of Temple University. There were about 12,000 Iranian students in the US during the 2017-2018 academic year. Data from the US State Department shows a drop in the number of F-1 student visas issued to Iranians in 2018.

When Iran signed a multilateral nuclear deal in 2015 that lifted long-imposed sanctions on the country, Hossein Moghni dreamed of expanding his general law practice. The successful lawyer from Iran had nearly 20 years of legal experience under his belt. And as Iran began opening up economically to the rest of the world, Moghni saw new opportunities in international trade law.

He decided to learn English and to study trade in the US.

But when Moghni arrived in the US in August 2017 to begin his studies in Indiana and California, the relationship between Iran and the US had begun to sour. By the end of 2018, US President Donald Trump had pulled out of the Iran nuclear deal, economic sanctions were reinstated and Iran was part of a list of countries in the administration’s travel ban.

“My plan changed, everything changed."

Moghni said he immediately felt the brunt of the deteriorating relationship between the two countries on his finances. Because of sanctions, banks between Iran and the US are barred from interacting from one another. It became difficult for Moghni to access his money. Then, the Iranian rial plummeted compared to the US dollar, and his savings shrank.

Moghni remembers checking the value of the dollar compared to the rial every night before going to bed and again every morning when he would wake up.

“That time was full of stress, I was under pressure,” he said. “It was terrible.”

For students like Moghni, rising tensions between the two countries have upended their education plans and what they hope to do in the future.

Hossein Moghni came to the US to study English and international trade. But after the US reimposed sanctions against Iran, he learned he would have to pay four to five times for his tuition and other living expenses.

There were more than 12,000 Iranians studying in the US during the 2017-2018 academic year, according to the Institute of International Education. For many, economic sanctions and currency fluctuations have resulted in higher tuition and living expenses than originally planned. Meanwhile, many Iranian students feel a sense of isolation and uncertainty due to US visa policies and a travel ban that restrict family members’ ability to visit the US.

Experts say these challenges are causing Iranian students to look elsewhere to study, which could have repercussions for both higher education and the future of diplomacy for generations.

"... losing these students is a loss not just to them, but to the US as well."

“Considering the contributions that Iranian students bring to the US, through their work in critical fields like technology, for example, and the potential that they have for bettering the relationship between our countries, losing these students is a loss not just to them, but to the US as well,” said Shannon Kuehn, a spokesperson for the Public Affairs Alliance of Iranian Americans.

Adam Weinstein, a senior law and policy analyst with National Iranian American Council, said there are already fewer Iranian students coming to the US. Data from the US State Department shows a drop in the number of F-1 student visas issued to Iranians from a high of 3,280 in 2014 to 1,433 in 2018. So far this year, about 400 student visas have been issued.

“These are top notch students who are conducting cutting edge research,” said Weinstein. “And it's frankly in the national interest to have them conducting that research at a university in Maryland rather than in Berlin.”

Kuehn said her organization hears from hundreds of students seeking help. Earlier this year, PAAIA created an emergency fund to provide students financial assistance. The group received 318 applications, though it could only give funds to 51 students.

Ashkan Shekarchi, a doctoral student in religion studies at Temple University in Pennsylvania, said his tuition expenses and rent, along with the devaluation of the Iranian currency, made him put off finishing his program for about a year.

“My expenditure quadrupled within a very short period of time,” he said. “Definitely it affects my peace of mind.”

Shekarchi says instead of focusing on his research, he put more effort toward finding ways to earn money “to make ends meet.” Even working wasn’t enough — international students can only work a certain amount of hours per week and jobs have to be on-campus, according to visa policies.

Students have found creative, but sometimes time-intensive, ways to get money for school expenses — from crowdfunding to asking for loans from friends. Some students scour personal networks to find Iranian Americans — like those who have funding from their universities or those who have graduated and are working — and ask them for a loan. To pay back the loan, the borrower then has his or her family send money to the lender’s family in Iran.

Meanwhile, students worry about escalating tensions that could lead to military action from the US or Iran. In recent months, the US blamed Iran for a series of oil tanker attacks and for shooting down one of its drones. Iran, meanwhile, contends the US drone was flying in Iranian airspace and have denied the tanker attacks in May and June. On June 20, Trump reportedly ordered military strikes against Iranian targets, but abruptly withdrew those orders before they were carried out.

Shekarchi said the potential for military clashes between the two countries keep him awake at night.

“I’m very deeply concerned that these tensions [will] spiral out of control,” said Shekarchi.

Ahoo Najafian, who received a doctorate in religious studies at Stanford University and is now in a post-doctoral position at Carleton College in Minnesota, echoed Shekarchi’s concerns.

“We are very worried ... about our families, all my family's back in Iran. This not knowing what is going to happen, you know, that's the most frustrating thing.”

“We are very worried ... about our families, all my family's back in Iran,” said Najafian. “This not knowing what is going to happen, you know, that's the most frustrating thing.”

Iranian students typically receive single-entry visas and are not able to leave the US without risking long visa delays and even possible denials, which could ultimately disrupt their education programs. Meanwhile, family members are unable to visit the US due to the travel ban.

Weinstein says the single-entry visa policy along with the travel ban results in a “toxic combination” where Iranian students are separated from their family for years.

“So if they're a doctoral student, as many of them are, and let's say it takes five to seven years for them to complete their PhD, that means five or seven years never seeing their families,” he said. “So they're really separated from their family.”

Ali Taleghani, who studies environmental engineering at the University of Missouri, Columbia, came to the US in 2016. He says his parents in Iran are older and he worries that he won’t be able to see them if they need him.

“So you have to … configure your brain to the situation you're stuck in,” he says. “I have to just finish my curriculum here as soon as possible because I cannot predict the future ... I don't want to leave the country without my degree because this is at least four years of my life here.”

As for Moghni, the way he’s dealt with the stress is to have a more positive mindset. His wife and two children were able to join him in the US. Instead of studying trade law, Moghni has shifted to US legal study for his master’s program. He plans to take the California Bar exam and is thinking about getting a doctorate in law.

Recently, he learned of the non-profit organization Pars Equality Center, an Iranian American community organization in San Jose, where he holds workshops as a volunteer, providing advice for those who may have questions about the legal system in Iran. He said the work is sustaining him and is helping him stay optimistic, though he’s not sure if he’ll be able to stay in the US long-term.

“I know some Iranian students ... they came back to Iran because they couldn't tolerate the situation,” he said. “But we didn't give up … we decided to feel good and gratitude for what we have. We decided to focus on our goals, why we are here.”