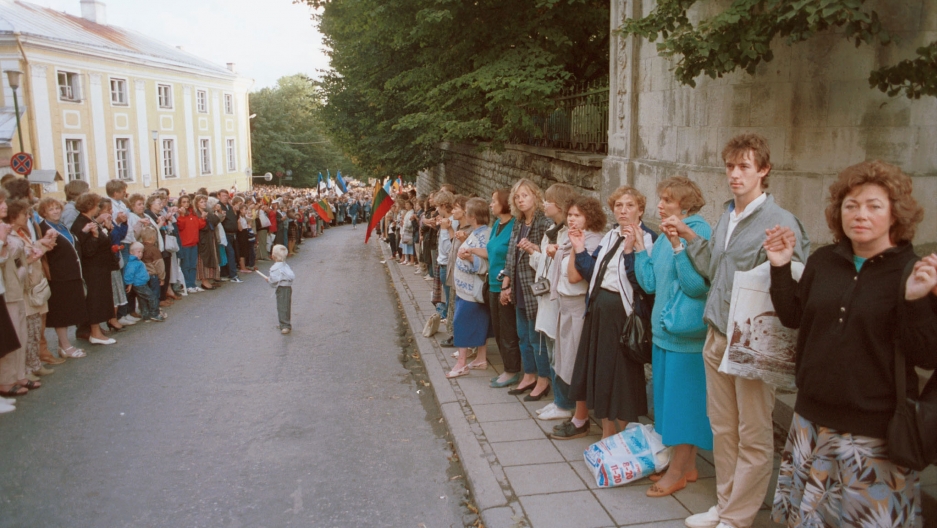 Thousands of people make a human chain from Pikk Hermann in Tallinn, Estonia, to Gediminas' Tower in Vilnius, Lithuania, on Aug. 23 in 1989.

Dainius Vaičekonis was a university student in 1989 when he got in a taxi on Aug. 23 to drive through heavy traffic to the outskirts of Vilnius, Lithuania. It was a day that would change his life, and the lives of millions in the Soviet-occupied Baltic countries.

“Late '80s was a very extraordinary time in the Baltics and certainly in Lithuania. The idea of freedom and hopes for freedom was becoming more and more believable.”

“Late '80s was a very extraordinary time in the Baltics and certainly in Lithuania,” Vaičekonis said. “The idea of freedom and hopes for freedom was becoming more and more believable.”

That August day 30 years ago, Vaičekonis joined hands with almost 2 million people in what was then the longest human chain in history, a mass demonstration that brought the Baltic countries closer to freedom after 50 years of communist rule. Today, it offers a relevant, nonviolent template for pro-democracy groups fighting for human rights.

Celebratory reenactments of the demonstration will take place across the world this Friday, Aug. 23, which is also recognized as Black Ribbon Day in the European Union and elsewhere in remembrance of the victims of Stalinism and Nazism. In Hong Kong, where pro-democracy protesters are actively demonstrating against Chinese authorities, organizers have directly drawn on the original spirit of the Baltic event, calling for a 20-mile “Hong Kong Way” demonstration.

“There are still a lot of places around the world that don't enjoy full freedom,” said Artūrs Saburovs, third secretary at the embassy of Latvia to the US, which is organizing a remembrance on the west lawn of the US Capitol. “We want to show the Baltic example. ... Circumstances are different in different places, but we think that we did something unique that everyone else can learn from.”

From old men to young children, pro-independence protesters in the then-Soviet socialist republics of Estonia, Latvia and Lithuania spanned almost 400 miles through the capitals of Tallinn, Riga and Vilnius. They stood marking the anniversary of a bloody crossroads in Baltic history, when in 1939, the foreign ministers of Adolf Hitler's Germany and Joseph Stalin's USSR signed the Molotov-Ribbentrop Nonaggression pact. A secret protocol in the agreement, denied by the USSR for decades, condemned the Baltic countries to illegal annexation by the Soviet Union and the repressions that followed.

Fifty years later, bearing the long-banned flags of their independent states and passing the words for freedom — vabadus, brīvība, laisve — up and down the line, Baltic people defied Soviet authorities to demand their human rights be restored.

“You could literally see that half the country was out in the road and holding hands.”

“You could literally see that half the country was out in the road and holding hands,” said Juris Kaža, a Latvian American freelance journalist who filmed the demonstration over Latvia from a surreptitiously hired helicopter. “It really, really was practically all three nations holding hands and saying, 'We want to get out of the Soviet Union, that's it.'" 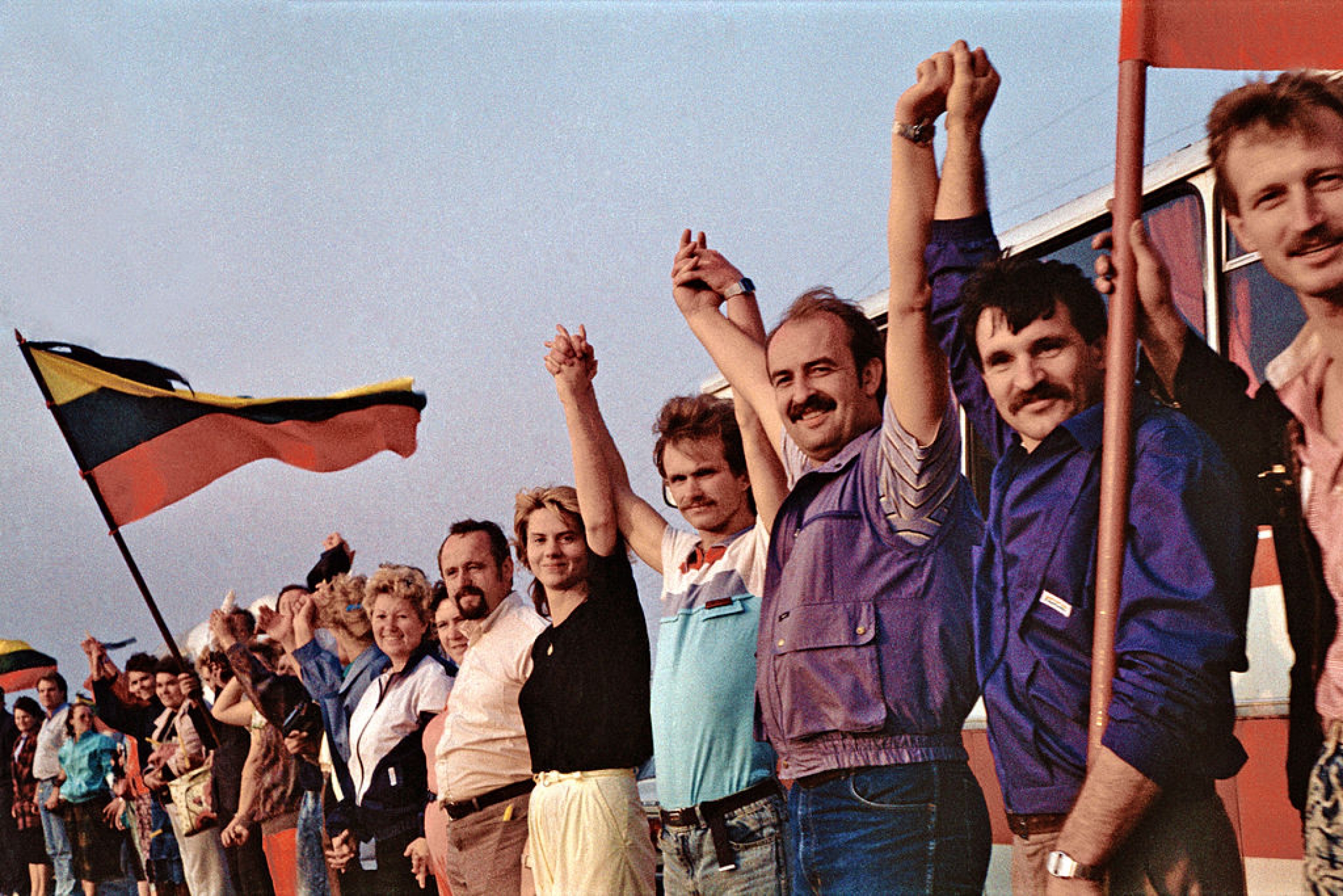 Peace in the face of violence

The Baltic Way was part of the larger, overarching Baltic freedom movement called the Baltic Singing Revolution, where musical traditions of the region played a key role in reestablishing independence in 1991. Guntis Šmidchens, head of the Baltic Studies program at University of Washington in Seattle, looks at this history in his book, "The Power of Song."

“Where does the bravery come from when people face off with armed soldiers and tanks? Bravery comes from knowing there are people around you; you hear them singing, you know that you're not alone,” Šmidchens said. “Bravery also comes from within you. And singing is one of the human actions that give the human self-confidence and bravery.”

For Dainius Vaičekonis, an assistant professor of music at Seattle Pacific University, song was also a meaningful part of his own Baltic Way experience.

“We sang Lithuanian folk and patriotic songs that were banned for decades. Tears could not stop dropping off my eyes, when we joined our hands and sang these songs.”

“We sang Lithuanian folk and patriotic songs that were banned for decades. Tears could not stop dropping off my eyes, when we joined our hands and sang these songs,” he recalled.

Dainius Vaičekonis will participate in anniversary events in Vilnius this week with his wife, Asta Vaičekonis, who also joined the Baltic Way 30 years ago.

“When the moment came to hold hands — that was magic,” said Asta Vaičekonis. “The energy from both directions, right and left, was incredible. Helicopters were flying, throwing flowers. Some people were crying, some just shouting, 'Lietuva!' But the feeling I felt for the first time was power. I felt so powerful being in that one united chain of people.”

Under Mikhail Gorbachev's policies of reform in the 1980s, leadership organizations for national independence movements emerged in the Baltics. Together, these groups — the Estonian and Latvian popular fronts and the Lithuanian Sajūdis — planned where people would stand along the 400-mile Baltic Way. They disseminated information through regional organizations and via clandestine broadcast services, like Radio Free Europe, which beamed information through Soviet jammers from abroad.

“It was extremely well-organized,” Kaža said. “The local chapters of the [Latvian Popular Front] did a magnificent organizing job of getting all these people out [so] that there would be no gaps anywhere.”

Ieva Ēvalde, from Riga, Latvia, was 16 in 1989. She participated in the event with her parents who heard about the demonstration through the Latvian Popular Front and work colleagues.

“It wasn’t possible then for me to learn about anything via phone — simply because we didn’t have a phone at home,” she said via email.

Ēvalde said when she joined the demonstration on Aug. 23, she wasn't afraid of Soviet troops. “I felt that it was safe, because the whole nation was with me,” she said.

The demonstration drew the regional and international spotlight to the Baltic fight for human rights, but it was also a strong signal to Soviet authorities in Moscow.

“The legend goes that at this moment, [Mikhail] Gorbachev, the head of the Soviet Union, looked at the news from the Baltic and said, 'We've lost them, and we'll never get them back,'” said Šmidchens. “The Baltic Way demonstration was the moment when the [independence movement] leaders showed that their countries are behind them.” 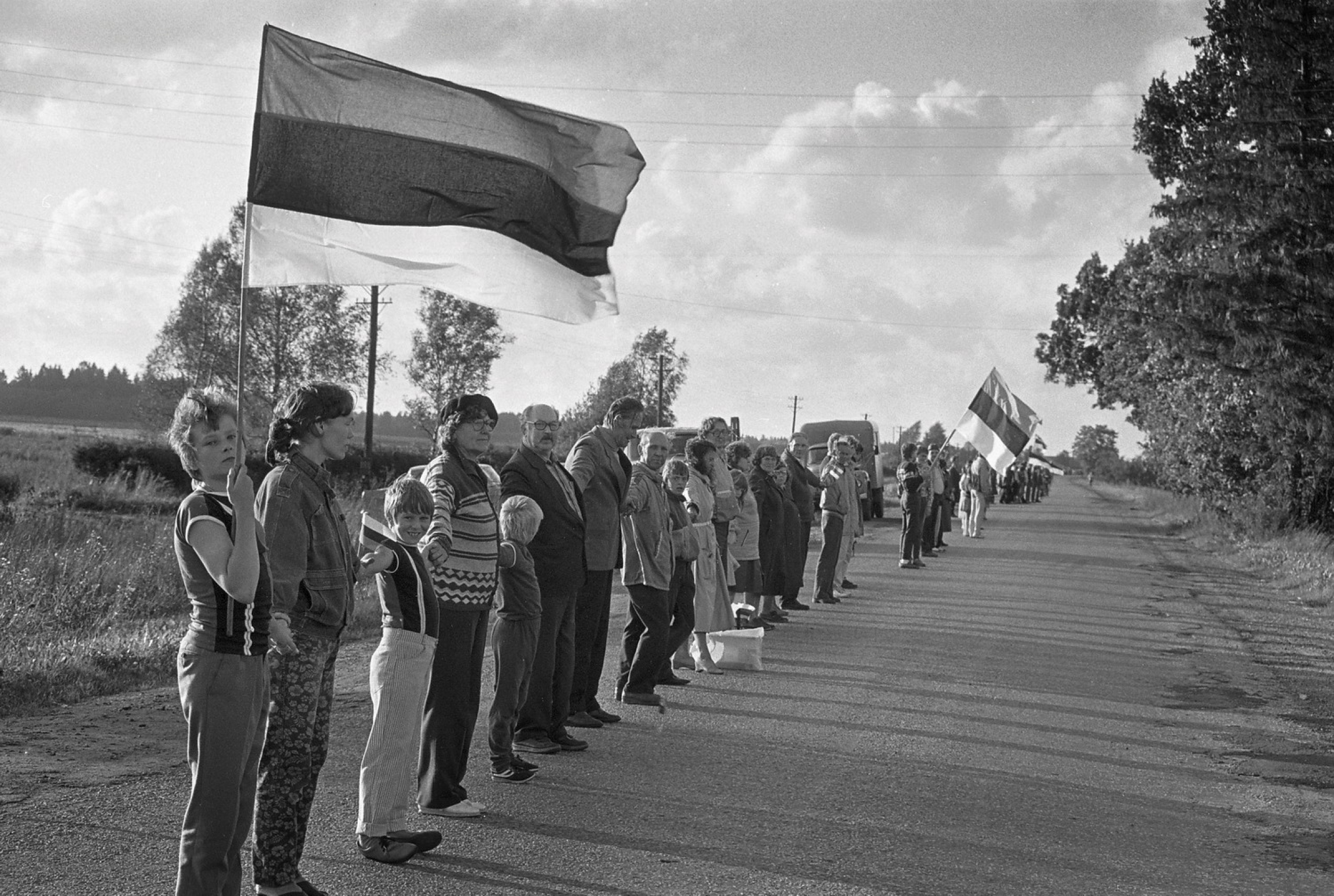 Regaining independence took another two years after the 1989 demonstration. But 50 years under Soviet occupation left its mark.

The demographics of the Baltic states, particularly Latvia and Estonia, changed dramatically in the Soviet period, as authorities deported or killed tens of thousands and relocated largely Russian-speaking migrants to the Baltics — partially to “Russify” the remaining population. Russian became dominant, local history was repressed and membership in the Communist Party was an unwritten requirement for many to advance in careers.

“They were really trying to make us forget what was happening, but they couldn't.”

“They were really trying to make us forget what was happening, but they couldn't,” said Vēsma Puharte, from Dobele, Latvia, whose grandfather died after being deported to Siberia under Stalin. “The Molotov-Ribbentrop Pact was the culprit for so much suffering in each individual family ... and the thing is, at school you never learned about it.”

Talking about the history of the free countries — which had declared independence in 1918 — was forbidden, and only spoken of clandestinely. It wasn't until the Singing Revolution that Puharte even saw the Latvian flag.

“I dare say, there were very few people Latvia who didn't know what the actual Latvian flag looked like, but to see it in real life ... that was mind-blowing. It was absolutely incredible,” she said.

The Baltic independence movements also used national identity and language in the political fight over the region as unifying mechanisms — often in opposition to pro-communist movements, which were primarily Russian-speaking.

But some Soviet-era migrants living in the Baltics were also pro-independence. When the states regained sovereignty and Soviet rule was recognized as an occupying force, many Russian-speakers were left in legal limbo and feeling abandoned. Some of these scars remain, and have been used to sow political divisions, often by Russia. The Russian Federation also continues to dispute the history of Soviet occupation. 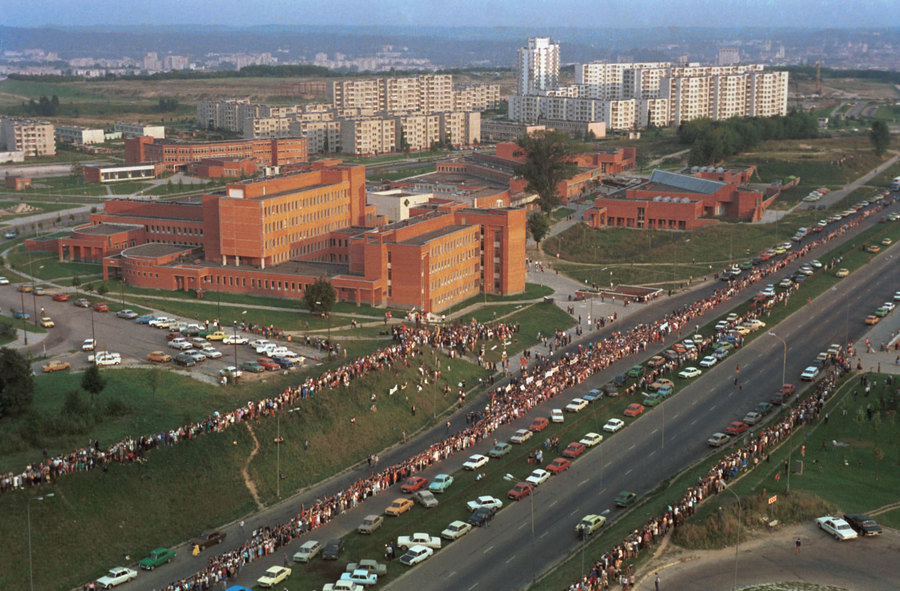 Echoes of the Singing Revolution

The Baltics — now strong democracies and members of the European Union and NATO — have set important examples for other post-Soviet republics. In Ukraine, the US has refused to recognize the Russian annexation of Crimea. That follows the precedent of the US not acknowledging the Soviet Baltic occupation under its nonrecognition policy — a critical stance for territorial sovereignty as Russia seeks to expand its sphere of influence.

Related: After 5 years of conflict, Ukraine's barrier to peace is still 'Russia's political will'

Karl Altau, whose family fled from Estonia during World War II, is the managing director of the Joint Baltic American Committee, which advocates for Baltic American issues and human rights legislation.

He said that “especially in this age of disinformation and misinformation,” propagated by Putin’s regime in Russia, recalling the history of the Baltic countries is key.

“We remember where we came from and why, in many cases, we had to flee the Baltic countries. ... Freedom is really one of our key words for today. When the Baltic Way happened in 1989, it was all about freedom.”

“We remember where we came from and why, in many cases, we had to flee the Baltic countries,” said Altau. “Freedom is really one of our key words for today. When the Baltic Way happened in 1989, it was all about freedom.”

Now a leading scholar of the Baltics, Šmidchens also remembers what it was like to watch the Singing Revolution growing up in the US.

“I think I'm one of the first generation of kids to go to school and learn about nonviolent political action,” he said, nodding to Mahatma Gandhi in India and Martin Luther King Jr. “Seeing it happen in 1987 through 1991, for an American — was a reconfirmation of these ideals that I had grown up with, as having worldwide significance — that through nonviolent political organizing, nonviolent assembly, nonviolent, free speech, humans can accomplish great things.”