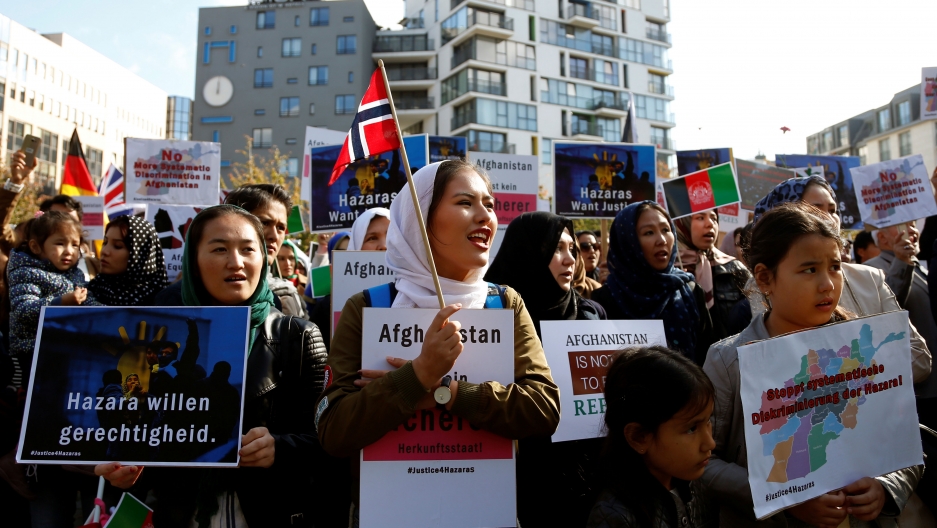 Demonstrators from Afghanistan's Hazara minority attend a rally for community's rights, outside the Brussels Conference on Afghanistan, in Belgium, October 5, 2016.

Aug. 19 was supposed to be a day of celebration in Afghanistan, which marked its 100th anniversary of independence from Britain. But Afghan President Ashraf Ghani postponed the celebrations after a suicide bombing at a wedding in Kabul on Saturday killed 63 people and injured 182.

Related: Changing your face to disguise your identity? Maybe, for these Afghan women.

The bomb attack, claimed by ISIS over the weekend, was aimed at the wedding festivities of a young Hazara couple in Kabul. In Afghanistan, members of the Hazara ethnic minority have been persecuted for centuries. The bride and groom survived, but many of their friends and family were among the dead and wounded. In a televized speech, Ghani vowed to avenge them.

The peace talks between the United States and the Taliban could end in an imminent agreement that includes the reduction of US military from 14,000 to 9,000 in Afghanistan. The Taliban must also pledge to initiate a peace negotiation with the Afghan government, but has refused to do so until now and it is expected that Oslo might host the talks.

The World's Carol Hills, spoke with Lina Tori Jan, a rising senior at the University of Richmond, about the attack, the peace talks, and her experience growing up as a Hazara in Afghanistan.

Carol Hills: Lina, what was your reaction to the tragedy this weekend?

I have to say it was just another really sad situation. I lived 45 minutes away from it when I was in Afghanistan. It's very real. It's inhumane, especially because it was targeted towards a specific group. It makes this like a persecution, a genocide, towards the Shia people and the Hazara people.

What was your experience as a Hazara growing up in Afghanistan?

It was hard. It was hard because my parents were refugees in Iran and they came back to Afghanistan after being treated poorly. And when they returned, it was during the Taliban regime. So I grew up in basements and hiding places as a 5-year-old. I couldn't understand why I couldn't go outside. My dad would always tell me, "My child, your Asian features — your eyes, your nose — are signs for people to identify you're a Hazara and you're a target." So it was hard as a child.

When people ask me of my earliest childhood memories, I only can share about hiding in basements. It was a crime to be a Hazara, and to this day, the way the attack has happened, it still makes you a criminal to be a Hazara or to be a Shia in Afghanistan.

How does an attack like the one that happened over the weekend at the wedding affect the community?

Sixty-three lives have been taken but hundreds and thousands of people are going to have to live with this for the rest of their lives. What makes it very scary is that this attack is targeting a specific ethnic group because to us — Hazara and Shia people — this is just another sign that Afghanistan has not advanced. We're still living during the Taliban times when the massacres of Hazara people and the Shia people were just declared and was allowed to happen. So it's a scary situation for us, but unfortunately the reality is we're going to move on and then we're going to shut up until another attack like this happens.

The US and the Taliban are currently holding peace talks. Do you know whether any of those concerns are being addressed — the concerns of the Hazara community at these talks?

To this day, not really. People are not hearing [us]. We've had leaders who are represented there, but, to be realistic, I feel like they're just a token there. They were just put there to represent. I don't really think they have a say. I don't think they're even being heard. The government officials are saying that this peace process is inclusive but representation is not a question. Are we talking about the actual issues — about uncomfortable discussions and conversation of what is going on in Afghanistan? No, we're not. I feel like it's a very rush decision: US withdrawal to bring the Taliban back into these peace talks without any realistic transition or a solid plan.

This interview was edited for clarity. Reuters contributed to this report.