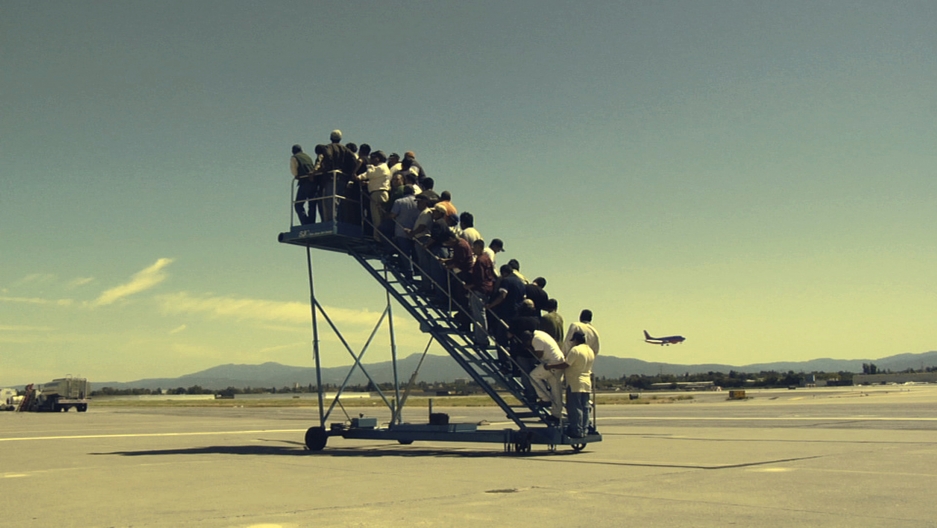 A still from Adrian Paci’s 2007 video, “Centro di permanenza temporanea” (Temporary Detention Center), in which Latin American men and women attempt to board a plane that never arrives. The video is included in the Phillips Collection’s exhibition on migration.

The Phillips Collection was founded nearly 100 years ago in a sprawling, elegant Dupont Circle mansion in Washington, DC. This summer, it’s been transformed. Curators have devoted three floors of gallery space to the exhibition “The Warmth of Other Suns: Stories of Global Displacement,” on view through Sept. 22.

It’s the most ambitious exhibition the museum has ever undertaken, according to Klaus Ottmann, the Phillips’ chief curator and deputy director for academic affairs. It includes more than 100 works by 75 artists from around the globe. Entire rooms had to be built to house video installations, which aren’t typically in the institution’s wheelhouse. Ottmann put the exhibition together with two guest curators from New York’s New Museum, Massimiliano Gioni and Natalie Bell.

Ottmann pointed out two videos by Francis Alÿs. In both, children with handmade boats walk into the Strait of Gibraltar, but one video was filmed on the Spanish side of the straight and the other from the Moroccan side. It’s hard to tell if the children are screaming with joy or fear as they get farther into the water.

The videos echo the plight of the estimated 2,262 migrants who drowned trying to reach Europe through the Mediterranean Sea last year. 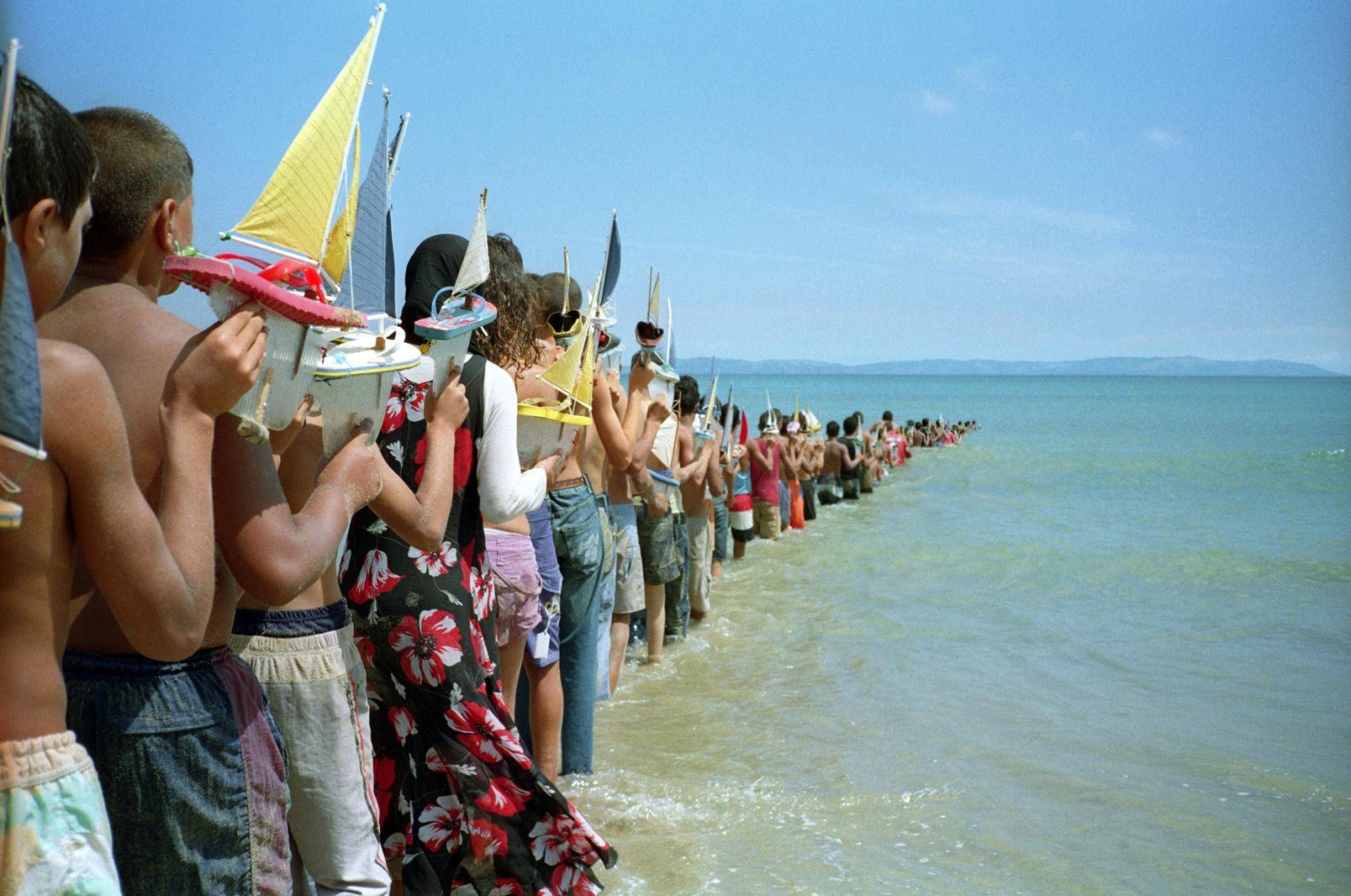 A still from the video “Don’t Cross the Bridge Before You Get to the River (Strait of Gibraltar, Morocco- Spain)."

Francis Alÿs / Courtesy of the artist and David Zwirner

“People get very emotional. I’ve seen people crying,” said Dani Levinas, the chairman of the Phillips Collection’s board and the exhibition’s champion. He felt it had to be in the museum, despite the significant financial and logistical hurdles it presented. His mother and father immigrated to Argentina from Poland and Lithuania respectively, and he immigrated to the US himself in 1980.

Levinas also defended the exhibition in a Washington Post op-ed last month after Metro rejected an ad campaign for it. The transit agency cited its rule prohibiting advertisements “intended to influence public policy” and “influence members of the public regarding an issue on which there are varying opinions.”

“I was very upset because I didn’t see this as a political statement,” Levinas said. “I couldn’t understand why they didn’t want to advertise it.”

Then, just last week, Metro reversed its decision but offered no explanation to the museum as to why. “We are unable to comment on deliberative process matters,” Metro spokesman Ian Jannetta wrote in an email.

The museum has already reallocated the money it was going to put towards the Metro ads, and Director Dorothy Kosinski said she wasn’t sure if they’d try to find more money for another campaign. She welcomed Metro’s change in thinking regardless.

“There’s nothing in the world that isn’t political,” she said. “And it’s kind of an illusion if a cultural institution thinks they’re neutral.” 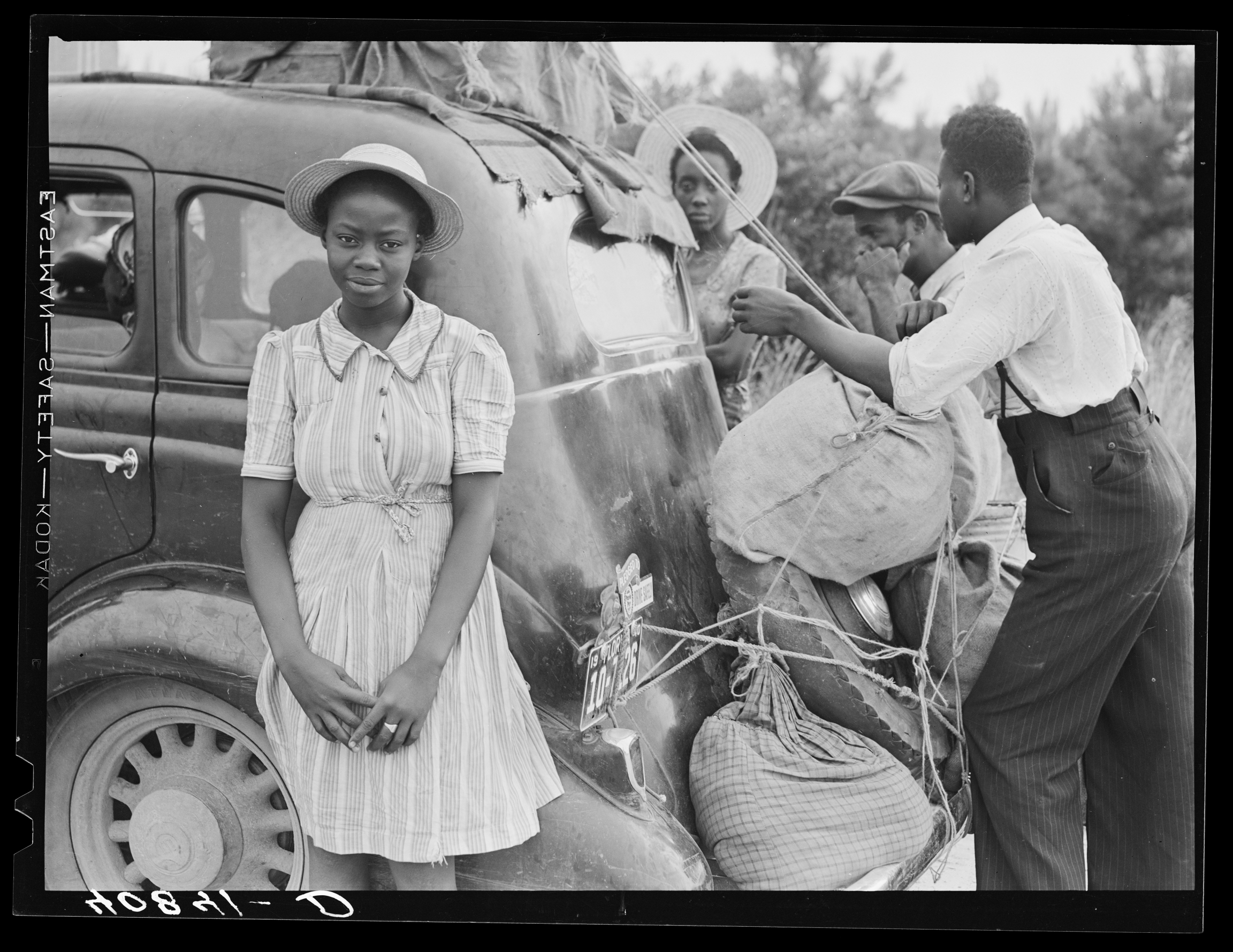 A 1940 photo of Florida migrants on their way to New Jersey to pick potatoes.

The exhibition is something of a departure for the Phillips, which is best known for its permanent collection of impressionist and modern paintings by European masters like Pierre-Auguste Renoir, Henri Matisse and Pablo Picasso.

But, Kosinski argued, immigrant artists are pillars of both the collection and “The Warmth of Other Suns.” One touchstone is Jacob Lawrence’s “Migration Series.” The colorful paintings, made between 1940 and 1941, document the Great Migration of African Americans from the rural south to urban north in the first half of the 20th century. They are currently on view next to works by contemporary black artists like Nari Ward and Beverly Buchanan.

“I feel that I’ve never understood the Jacob Lawrence series better,” Kosinski said as she looked around the gallery.

The museum’s famous Rothko Room has also been altered for the exhibition. Abstract expressionist Mark Rothko, a Russian immigrant to the US, helped design the meditative space himself. The room now also contains everyday objects found on the US-Mexico border, and interviews with migrants play over a loudspeaker.

“Not everyone liked that idea,” Ottmann laughed, “but I think it’s sometimes good to shake up the existing mindset.”

Both Kosinski and Ottmann made sure to point out an installation by French-Algerian artist Kader Attia. Clothes in different shades of blue covered the gallery floor — jeans, t-shirts, socks. At first, they appeared to have been randomly thrown about, but on second look they started to resemble an ocean wave.

Seen together, the clothes were something beautiful. Individually, they look like loss. 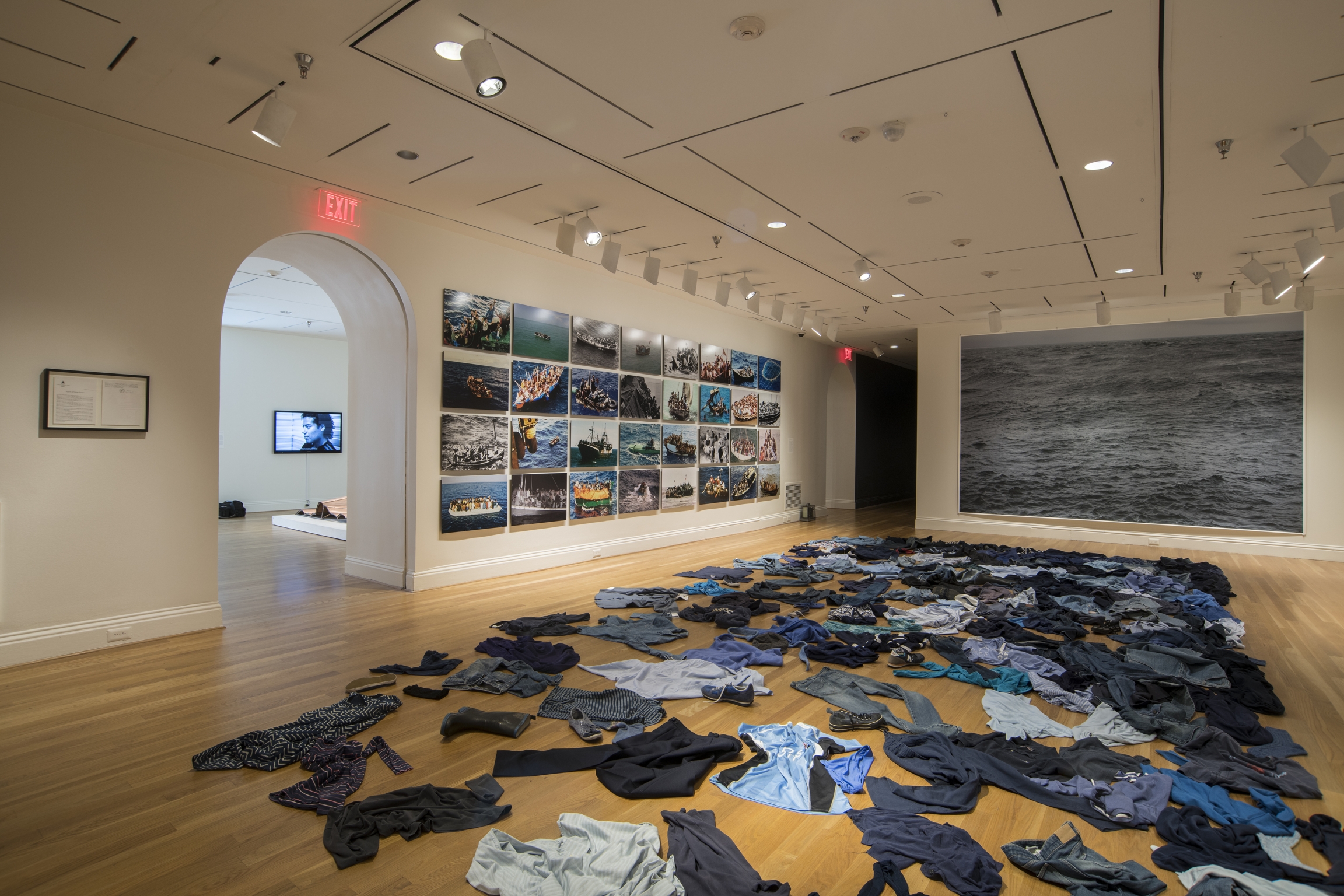 For “La Mer Morte (The Dead Sea),” French-Algerian artist Kader Attia covered the floor in blue clothing, as if the wearers had suddenly disappeared into the sea.

The Warmth of Other Suns” is on view at the Phillips Collection through Sept. 22.

This story was originally published on wamu.org.