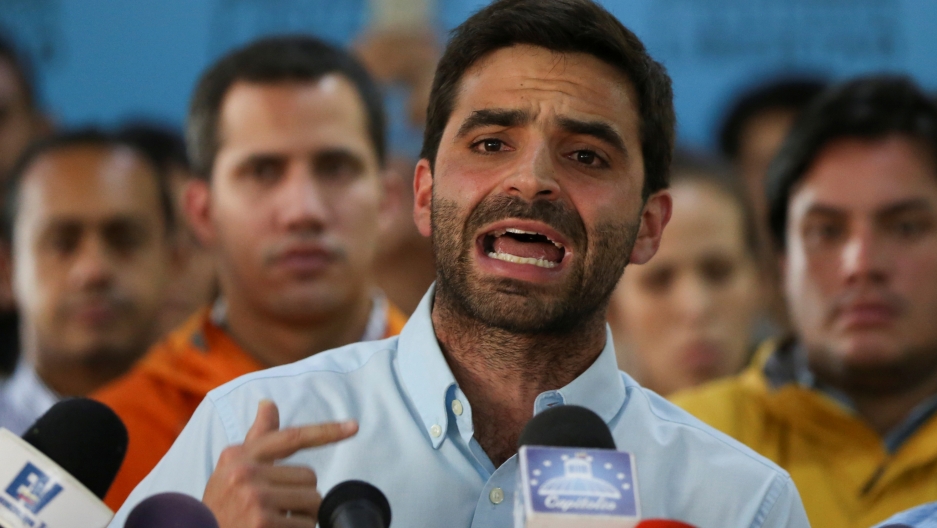 Juan Andres Mejia, lawmaker of the Venezuelan coalition of opposition parties, talks to the media during a news conference in Caracas, Venezuela Nov. 3, 2017.

Venezuela's Supreme Court said it accused several opposition lawmakers of treason and conspiracy Monday, in addition to 21 other deputies the court has charged with similar crimes since 2018. Of those accused, two lawmakers remain under arrest while most others have either fled the country or sought refuge in friendly embassies.

"The Maduro regime has decided to shut down the assembly by persecuting and imprisoning congressmen who oppose them," says Juan Andrés Mejía, deputy in Venezuela's National Assembly.

In 2015, the opposition won a two-thirds majority of congress in a landslide vote, taking control for the first time in 16 years. Embattled President Nicolás Maduro's government refused to recognize any of its decisions, and the Supreme Court has shot down every measure it approved.

Opposition politician Mejía went into hiding in Venezuela and recently fled to the US. He spoke to The World's Marco Werman about the situation in Venezuela.

Marco Werman: You, yourself, were stripped of immunity like those other legislators were yesterday. That happened to you a few months ago. So why are you in the US now? Does it have to do with personal safety?

Juan Andrés Mejía: Well, the Supreme Court decided to rule against me and my colleagues, saying we had committed treason, we had committed rebellion, usurpation of power, instigation. I decided to go into hiding in Venezuela because on the same day, or May 8, that my sentence was published, Congressman [Edgar] Zambrano, the vice president of the National Assembly, was detained and taken into prison, where he is today. Still. There hasn't been a procedure, there hasn't been anything legal around that detention. So, I decided to go into hiding for more than two months in Venezuela, and a few weeks ago, I decided to leave the country in order to be able to raise my voice again. And I hope I can come back soon. But it's difficult for me to do that if I don't want to be detained.

If you had stayed in Venezuela, what's the likelihood that you would be in prison right now?

Congressman Zambrano decided to stay. He went to his office one day, and he was surrounded by the police. He decided to stay inside his car, and he started to tweet that he was being surrounded by the police. Since he refused to get out of his car, they decided to tow his car with him inside. And they took his car and him into prison and he's been there for three months, as I was saying. He has barely been able to see his family. There haven't been any official charges against him and the trial hasn't started yet. So, that's the reality of hundreds of Venezuelans who are — it's fair to say — political prisoners.

So, now Nicolás Maduro has threatened to essentially shut down the legislature and hold new elections. Is that legal?

It's absolutely illegal. It's unconstitutional and it also threatens the will of the people. The National Assembly was elected four years ago by more than 50 million Venezuelans. But since then, Maduro has decided to shut it down. He has blocked congressmen from being paid. He has blocked, with the National Guard, the entrance of the parliament, so we can only go there certain days a week. So it's been a process [that] didn't just start recently, it's been going since at least three or four years, but it's been getting worse in the past few weeks.

Related: Lebanon becomes a refuge for Venezuelans of Lebanese descent

The announcement about the possible shutdown of the National Assembly was supposed to happen yesterday, but it didn't. What happened instead?

They've been slowly taking deputies out of their seats. As you can see, this is a strategy by the Maduro regime to avoid being denounced as a dictator. But at the end, when you see the results, there shouldn't be a doubt that this is not a democratic procedure. This is the behavior of someone who doesn't believe in democracy and the will of the people, and it's more the behavior of a dictator who's only concerned about remaining in power, no matter the suffering or no matter the constitution.

The strategy that Maduro is employing — is it working?

I would say it's a strategy that it has been able to proceed, to move forward because Maduro can persecute, can kill, can imprison, can torture with minimal consequences from the international community.

Related: Hospitals are turning into 'cemeteries for migrants' on Colombia-Venezuela border

Nicolás Maduro though, despite what some people say, was elected and is still president. How do you negotiate that?

Well, the fact that you pretend to have an election does not mean you were elected. The UK, most European countries, most Latin American countries — we're talking about more than 50 countries around the world — did not recognize last year's elections as free and fair elections. So what we're demanding now, is to have a free and fair election with international assistance from the European Union, so that the people of Venezuela can decide what they want for the future.

As far as this latest threat by Maduro to shut down the national assembly, will he be challenged on that either internally or externally, and how would that happen?

Well, I think he doesn't have the support [for] that yet, but he is more than willing to do so. I mean, his desire is to not have an official opposition. His desire is to control every single opinion being made in Venezuela. He has been closing the media since 2013. He has killed, during protests, hundreds of students and youth leaders. He has imprisoned and killed Indigenous leaders and union leaders. So, basically he's a person who's not willing to compromise, who's not willing to listen to different opinions. And regardless that we're going through the worst economic and social crisis, he refuses to leave office. This is what the international community should take into account. This is the basic agreement that we should have, that no person in the world should be the barrier to progress.