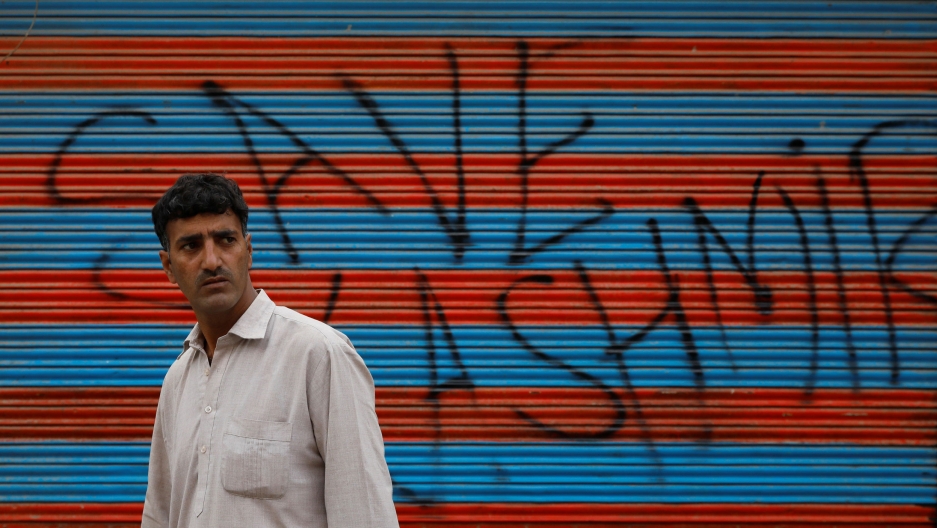 A Kashmiri man waits before Eid-al-Adha prayers during restrictions after the scrapping of the special constitutional status for Kashmir by the Indian government, in Srinagar, Kashmir's largest city, on Aug. 12, 2019.

Pakistan on Tuesday asked the United Nations Security Council to meet over India's decision to revoke the special status of Jammu and Kashmir, the Himalayan region that has long been a flashpoint in ties between the nuclear-armed neighbors.

The move by India blocks the right of the state of Jammu and Kashmir to frame its own laws and allows non-residents to buy property there. Telephone lines, internet and television networks have been blocked since the Aug. 5 decision and there are restrictions on movement and assembly.

"Pakistan will not provoke a conflict. But India should not mistake our restraint for weakness," Pakistan's Foreign Minister Shah Mahmood Qureshi wrote in a letter to the Security Council seen by Reuters.

"If India chooses to resort again to the use of force, Pakistan will be obliged to respond, in self-defense, with all its capabilities," he said, adding that "in view of the dangerous implications" Pakistan requested the meeting.

It was not immediately clear how the 15-member council would respond to the request and whether a member of the body would also need to make a formal request. Pakistan said on Saturday it had China's support for the move.

Poland is president of the Security Council for August. Polish Foreign Minister Jacek Czaputowicz told reporters at the United Nations on Tuesday that the council had received a letter from Pakistan and "will discuss that issue and take a proper decision."

The Himalayan region is divided between India, which rules the populous Kashmir Valley and the Hindu-dominated region around Jammu city, Pakistan, which controls a wedge of territory in the west, and China, which holds a thinly populated high-altitude area in the north.

UN Secretary-General Antonio Guterres has called on India and Pakistan to refrain from any steps that could affect the special status of Jammu and Kashmir. Guterres also said he was concerned about reports of restrictions on the Indian side of Kashmir.

The UN Security Council adopted several resolutions in 1948 and in the 1950s on the dispute between India and Pakistan over the region, including one which says a plebiscite should be held to determine the future of the mostly Muslim Kashmir.

Another resolution also calls upon both sides to "refrain from making any statements and from doing or causing to be done or permitting any acts which might aggravate the situation."

UN peacekeepers have been deployed since 1949 to observe a ceasefire between India and Pakistan in Jammu and Kashmir.

Rick Olson served as the US ambassador to Pakistan form 2012 to 2015 and is a senior advisor to the United States Institute of Peace. The World's Marco Werman spoke to Olson about the relationship between India and Pakistan.

Marco Werman: Ambassador, help us understand the relationship between Pakistan and India and how that plays into what's happening in Kashmir right now.

Rick Olson: It has been a contentious relationship between India and Pakistan since the establishment of the two countries in 1947. They have fought four wars, at least three of which were pretty directly related to the question of Kashmir. Kashmir is a Muslim-majority state. In 1947, it was a principality — Muslim majority principality — and there was an expectation on the part of Pakistan that it would come into Pakistan as a Muslim-majority state. What happened is the Maharajah chose to align with India and that has been a bone of contention between the two countries ever since.

"Things can really get out of control very quickly on the subcontinent."

India and Pakistan, we have to remember, are both nuclear powers. That must also add to the challenge.

Well, absolutely, and this is why the stakes are so high for, amongst others, the United States, but really for the whole world because you have two nuclear powers that are eyeball to eyeball. I mean, they are literally adjoining each other. It's unlike the Cold War when the US and the USSR were at least separated by oceans and had a bit of time before missiles would be launched. Things can really get out of control very quickly on the subcontinent.

Is there an opening for international intervention here? Should the US try to mediate, as President Trump kind of offered in passing to Imran Khan of Pakistan?

Well, the problem with this is a classic mediation would not work because a classic mediation requires both parties to agree to the terms of the mediation. And India has made clear that it does not see a role for international mediation. Now, I think the role for the United States — which it has traditionally played — is to, in times of crises, help to de-escalate and to help both sides using its good offices to find a way out of going a step further, and an escalatory conflict. And I think, unfortunately, I think that will probably be a role that the United States will probably have to continue to play and should play.

Ambassador, pull back for a moment because the US has been deeply engaged in this part of the world since 9/11. Kashmir, though often not the first consideration, but now it seems to be more in the center. With Afghanistan-Pakistan strategy, there is often a blue sky belief that maybe there is a grand bargain to be had. Is that still possible? Some deal that would give everyone in the region something and leverage like the diplomatic muscle of a country like India or is it too late for that, given India's muscular intentions in Kashmir?

Well, I think that it remains to be seen how it's going to play out in terms of the Afghan negotiations. The peace process between the US and the Taliban as it is pretty actively going forward. Pakistan has played a helpful role in that regard and I think one of the questions will be, going forward, is whether Pakistan insists on a greater role for the US with regard to India in exchange for its cooperation on Afghanistan.