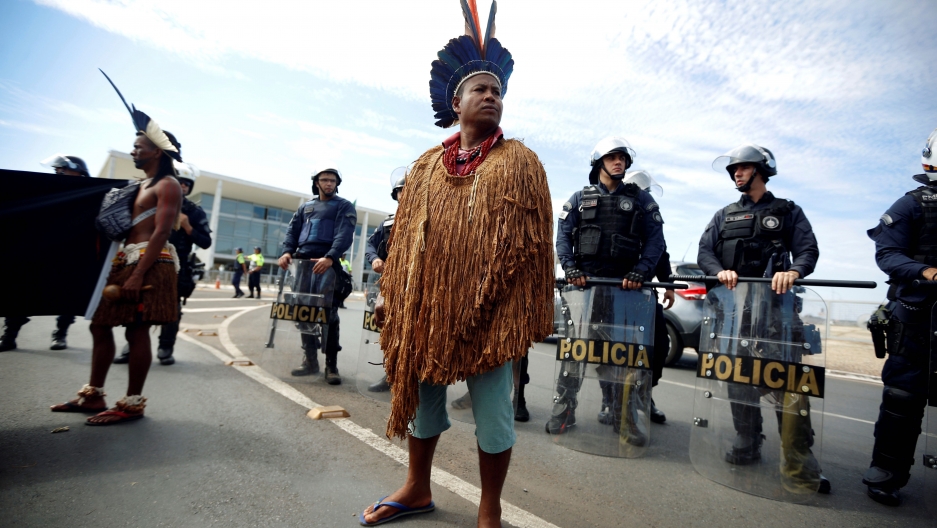 Indigenous people attend a protest to defend indigenous land, education and the indians health in front of the Planalto Palace, in Brasilia, Brazil, June 4, 2019.

Worldwide, traditional landholders including Indigenous and Afro-descendent populations manage or have land rights over at least 38 million square kilometers (14.67 million square miles), equivalent to at least 40% of all protected and ecologically intact land, according to the Center for International Forestry Research. Critically, 22% of the world's tropical forest carbon is stored in territory belonging to those groups.

On Thursday, a special report by the Intergovernmental Panel on Climate Change (IPCC) highlighted the key role of traditional landholders and how important it is for governments to recognize the land rights of those groups over the territory they inhabit and manage.

“They have the lowest rates of deforestation; there’s more flora and fauna in the ecosystem and there is more biodiversity,” he said.

Recognized traditional landholder territory in Colombia spans just over 32 million hectares (79.4 million acres), 93% of which is still in its unspoiled natural state, according to 2017 statistics from Colombia’s National Planning Department.

“These territories are contributing oxygen and biodiversity to the world — and the world should know that we are defending them with our lives,” Suárez said. “We have to strengthen the protection of our leaders so they can protect the environment.”

In Colombia, the second most-biodiverse country on Earth, there is a terrible cost being paid by those fighting for their land rights.

According to a special report by Global Witness, the country was also home to 24 of the global total of 164 land and environmental defenders killed in 2018, ranking second behind the Philippines, where traditional landholders have also been targeted.

“These territories are contributing oxygen and biodiversity to the world — and the world should know that we are defending them with our lives. We have to strengthen the protection of our leaders so they can protect the environment.”

Related: Is 'new economics' the way to save the planet?

This trend worries Omaira Bolaños, who is originally from southern Colombia but now is the Washington, DC-based Latin America program director at a nongovernmental organization called the Rights and Resources Initiative (RRI).

Colombia’s traditional landholders have land rights recognition under Chapter 11 of Colombia’s 1991 constitution, but, according to Bolaños, more than 1,000 land claims from those same groups are still outstanding.

“Access to land rights has been the foundation of the conflict in Colombia,” she said, referencing the over 50-year civil conflict between the government and various leftist, guerilla groups.

She says one of the biggest pressures these communities face now in their ancestral lands is the killing of social leaders after the 2016 signing of the peace agreement between the Colombian government and the leftist, FARC guerilla group.

Bolaños says that is “heartbreaking” because a key part of the 2016 peace agreement was the safeguarding of the collective land rights of the traditional landholder groups — Indigenous and Afro-Colombian alike.

“It was hoped the peace accord would open up these areas and that these groups could enjoy the full extent of their rights, but now there is systematic killing of leaders and these same lands they’re protecting are the target of deforestation by cattle ranchers, illegal miners and others.”

“It was hoped the peace accord would open up these areas and that these groups could enjoy the full extent of their rights, but now there is systematic killing of leaders and these same lands they’re protecting are the target of deforestation by cattle ranchers, illegal miners and others.”

“This needs to be implemented along with the rest of the peace process,” she said.

According to Bolaños, one of the big positives from the recent IPCC report is that the scientific community was more fully recognizing the traditional landholders and their role as stewards of forests.

“The science is catching up,” she said. “This is a good moment to strengthen those connections, to combine the two bodies of knowledge.”

In neighboring Brazil, land rights are also the subject of violent conflicts: The same Global Witness report showed 20 environment and land defenders were killed there in 2018.

“It’s hard for those communities to protect these lands on their own,” he said.

Indigenous rights are also enshrined in the Brazilian constitution, but despite a deadline in 1993, 64% of the 1,306 lands claimed by Indigenous groups still haven’t been officially registered as of 2018. That means although more than 117 million hectares (nearly 290 million acres) is officially occupied by Brazil’s 713 Indigenous landholdings, much more could be protected.

That looks unlikely to change: When current Brazilian President Jair Bolsanaro was running for office, he pledged that “not one centimeter more” of Indigenous land would be granted.

“Some of the most recent and strongest evidence has shown when Indigenous land rights are secured via titles — official documentation from the state — we see significantly lower deforestation rates within just two to three years. And the strongest effect is in the Amazon region.”

“Some of the most recent and strongest evidence has shown when Indigenous land rights are secured via titles — official documentation from the state — we see significantly lower deforestation rates within just two to three years,” he said. “And the strongest effect is in the Amazon region.”

He added once countries focused on securing land rights as part of their climate mitigation strategy, international climate funds may open up to help accelerate the process.

Bolaños is also hopeful, saying many of the developed nations, like Norway, Sweden and Germany, who have been strong supporters of climate change mitigation funding have also been in Colombia for years, supporting the peace process with money and expertise.

“They have been very active in Colombia, reducing deforestation and working with Indigenous people on the ground,” she said. “With their help, there is a chance for a stronger voice, to say that peace and the implementation of the peace process can confront deforestation and help reach climate goals.”