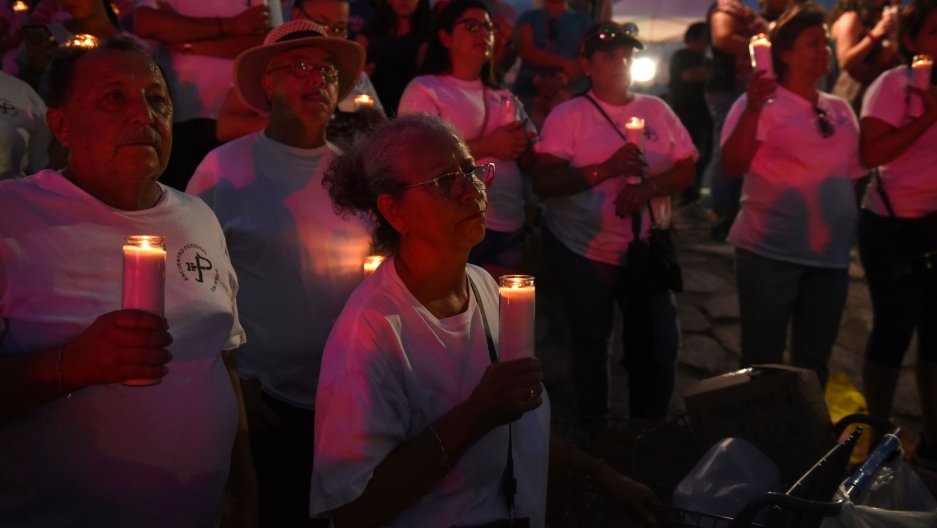 A group of people hold candles during a vigil at a memorial four days after a mass shooting at a Walmart store in El Paso, Texas, on Aug. 7, 2019.

A week after a mass shooting at a Walmart in the town of El Paso, Texas, where 22 people were killed in a white supremacist attack Saturday, residents say some students still haven’t returned to school, fearing future violence, as a new poll revealed nearly half of all Americans expect another mass shooting will happen soon in the United States.

The survey, which was released by news agency Reuters Friday, found that 78% of Americans said it was likely that such an attack would take place in the next three months, including 49% who said one was “highly likely.”

“There is fear in our school district from our entire community — we would have never, ever thought that this would happen in El Paso, Texas,” he added.

Tammi Mackeben, director of school counseling for the school district, set up a hotline to assuage people’s fears and provide assistance to anxious students.

“It's a 24/7 hotline so students can call it anytime — anytime they wake up in the middle of the night and they're scared,” she said. “We want our students to know we're here 100% of the time to help.”

According to the same Reuters poll released Friday, 69% of US adults want "strong" or "moderate" restrictions placed on firearms.

But Republican Senate leader Mitch McConnell said Thursday he would not call the Senate back early to consider new gun legislation, rejecting a plea from more than 200 US mayors, including two whose cities endured mass shootings last weekend.

In the absence of legislative action, people are building resilience by coming together as a community and organizing rituals that help them cope.

Daniel Gutierrez, student body president at Montwood High School in El Paso’s Socorro Independent School District, along with fellow students, rang bells and released a balloon for every one of the known victims at the time.

Gutierrez, who arranged the memorial held on Monday, said students and teachers arrived quietly, their heads down and some were crying.

During the ritual, he took the opportunity to push a positive message for “the future generation” to set the “right example,” and to take the appropriate actions that will prevent more killings.

Gutierrez said he plans to go to another memorial for the shooting victims over the weekend.

"We're planning to go as a family to go visit the memorial of where the event happened because it is something that we were all impacted by, whether we were impacted firsthand," he said. "It happened in our community and I think it just helps us accept everything that happened and just take in the lives that we should be remembering."