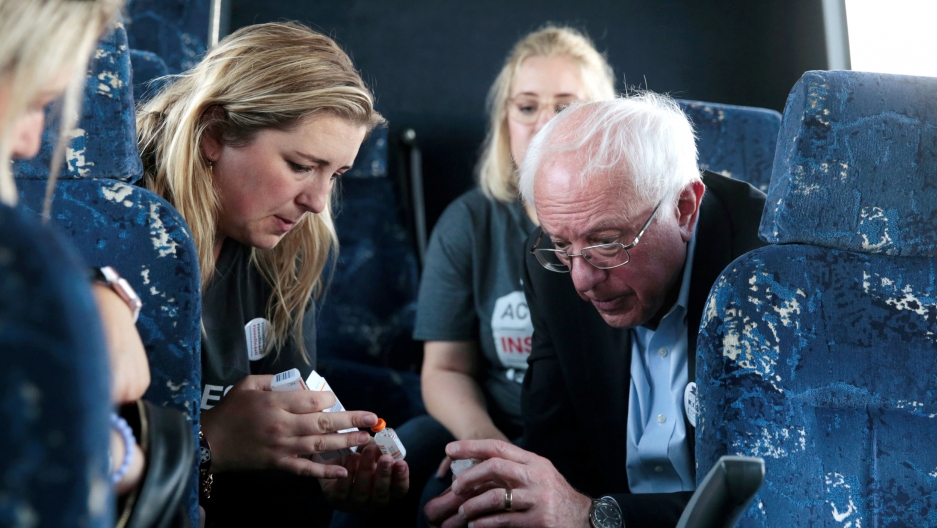 US Sen. Bernie Sanders talks with Type 1 diabetes advocate Quinn Nystrom as they ride a charter bus across the border back to Detroit, Michigan, after Nystrom purchased lower-cost insulin from a Canadian pharmacy in Windsor, Ontario, Canada, on July 28, 2019.

A few months ago, Quinn Nystrom responded to a post on Facebook and decided to try something she had never done before: join a caravan to Canada. The reason she left her home in central Minnesota on the morning of May 3 for a five-hour drive north was to buy insulin from a pharmacy across the border in Fort Frances, Ontario.

Nystrom has Type 1 diabetes and depends on round-the-clock insulin to survive. But in the last few years, the price of this lifesaving medicine has risen exponentially, even for those with health insurance. With ever-rising prescription drug prices in the United States, a growing number of patients and politicians are looking north of the border for less expensive options.

“When you’re sort of a middle-to-low income person and you have rent to pay, what that means is you’re putting things on a credit card and then you go into debt,” Nystrom said. “That vial of insulin that would cost me $340 here — it cost me $30 in Canada.”

Since joining the May caravan, she has led two more trips north with other diabetes patients.

Her efforts have coincided with legislative initiatives that would it easier to import Canadian drugs. Meanwhile, in Canada, the growing US appetite for Canadian drugs has triggered concerns about potential ripple effects on their drug supply, and whether an influx of US prescription orders might cause shortages.

Nystrom recalls feeling nervous returning with a three-month supply of insulin from that first trip, but she said US border agents didn’t care even when she told them what she was bringing back. They only inquired about whether she was carrying firearms or illegal drugs, she said. The US government has historically discouraged people from importing drugs. The FDA could seize an online order. In most cases, it’s illegal to import drugs, at least technically. Exceptions include over-the-counter medication and drugs for so-called “serious” conditions, whose imported quantity cannot exceed a three-month supply.

Recent state and national legislation aim to change that. Four US states — Florida, Maine, Vermont and Colorado — have passed measures that would make it a lot easier to import drugs wholesale from Canada, and to order them online, with legislation in several more states pending. Florida’s policy, for example, would allow the state to directly contract with Canadian wholesalers, to purchase and import drugs. Federal health officials still need to approve such policies. And last week, the Trump administration announced plans that would make importing medicines, especially from Canada, even easier by setting up pilots for states and wholesalers to order certain drugs from outside the country.

Democratic presidential candidates were eager to jump on the issue during recent debates and on the campaign trail. On Nystrom’s most recent trip to a pharmacy in Canada, Vermont Sen. Bernie Sanders joined them.

“There are millions of people who are doing exactly what we are doing here today,” Sanders told reporters inside the Olde Walkerville Pharmacy in Windsor. “They’re either going to the Internet, to Mexico, to Canada; they’re going to Europe to buy exactly the same medicine at a fraction of the price.”

Sanders is very familiar with the visit-Canada drill. He started medical caravans from Vermont back in 1999. On his most recent trip, he stressed that Canada has controls on pharmaceutical companies through a review board that keeps prices low — controls that also quite literally drive people like Nystrom to Canada to buy them. The US is different from other countries in that it does not have price controls on drugs. Pharmaceutical companies negotiate directly with specific health groups, like hospitals and insurers.

The growing focus on drugs from Canada has hit a nerve there. Nystrom has gotten slammed on social media, for example, for taking Canada’s medicines.

“Each time I think we get a very warm reception from Canadians, but I will say is we do hear criticism,” Nystrom said. “The biggest criticism is they believe it’ll create a shortage.”

If anyone is taking advantage of 🇨🇦 and Big Pharma its @QuinnNystrom and her Caravan to 🇨🇦 for insulin. Wake up you fools. This isn't going to change anything but Canadian's access to our supplies.

Before each trip, Nystrom said she reached out to check that the pharmacy has insulin and that it wasn't creating problems for local customers.

But in general, shortages have already become an issue in Canada, even at the very pharmacy that Nystrom and Sanders visited.

“We have a lot of blood pressure medication, some diabetes medication — those have gone missing,” said John Gergis, the pharmacist who was part of the “warm reception,” ringing people up at the register that day. Across Canada, three chemotherapy cancer drugs, as well as ARBs, or angiotensin receptor blockers, used by patients suffering from high blood pressure, were facing shortages, according to local news reports. “And then our fridge items, Gergis added — some vaccines, they stopped making.”

Gergis and other health experts say insulin isn’t actually under threat of running out. It’s these other drugs he worries about being scarce. Lately, he has found more drugs have come up unavailable when he tries to order them through Canada’s central ordering system. And a recent survey from the Canadian Pharmacist Association found that one in four Canadians has already reported being impacted by a drug shortage.

Some of these supply issues are logistical — a manufacturing plant may close down, for example, or demand can overwhelm supply.

“You can get shortages because a factory making the raw ingredients goes out of business or shuts down,” said Andrew Hill, a pharmacology fellow at Liverpool University in the UK who sits on a drug pricing committee at the World Health Organization. He added: “You can get drug shortages sometimes because a health authority doesn’t order the right amount and suddenly it wants a lot more drugs.”

Other issues are more structural: Most drugs in shortage are very cheap and inexpensive, providing little incentive to pharmaceutical companies to continue making them, said Erin Fox, a senior pharmacy director for drug information at the University of Utah.

Even so, Hill is wary of the idea that lower drug prices of generics necessarily have to result in shortages.

“You have to make sure that the price of a drug is high enough for there to be a business model — for there to be enough profit margin for a company to carry on supplying it,” he said. “But having said that, you look at the system in the United Kingdom and Europe, where drug prices are four times lower than the United States, but we’re still able to produce and supply those drugs very reliably.”

As US lawmakers look to Canada to supply more of their drugs, a group of 15 hospital, patient and pharmacy groups signed onto a letter urging the Canadian government to protect their drug supply.

“One of our biggest concerns is with exacerbating drug shortages in Canada, [and] not being able to respond to demands of both Canadian patients as well as American patients,” said Joelle Walker, a spokesperson with the Canadian Pharmacists Association.

Canada’s population is about the size of California’s and represents only 2% of the global drug market. It’s hardly in a position to supply the US all its drugs, added Fox.

“They don’t have enough to share with the entire US, at all,” she said. “Canada negotiates prices and they order a set amount of drugs. They can increase those orders, but I’m pretty sure pharma is not going to sell them more drugs so we can buy it cheaply. There’s just no way that is going to work at all.”

In an emailed statement to The World, Health Canada’s office said that the government is “constantly monitoring” the drug supply and engages in conversation with US officials and other health experts about the situation. “Canadians are proud of their universal, public health care system and our government is focussed on ensuring that they’re protected from high drug prices with strong regulations.” 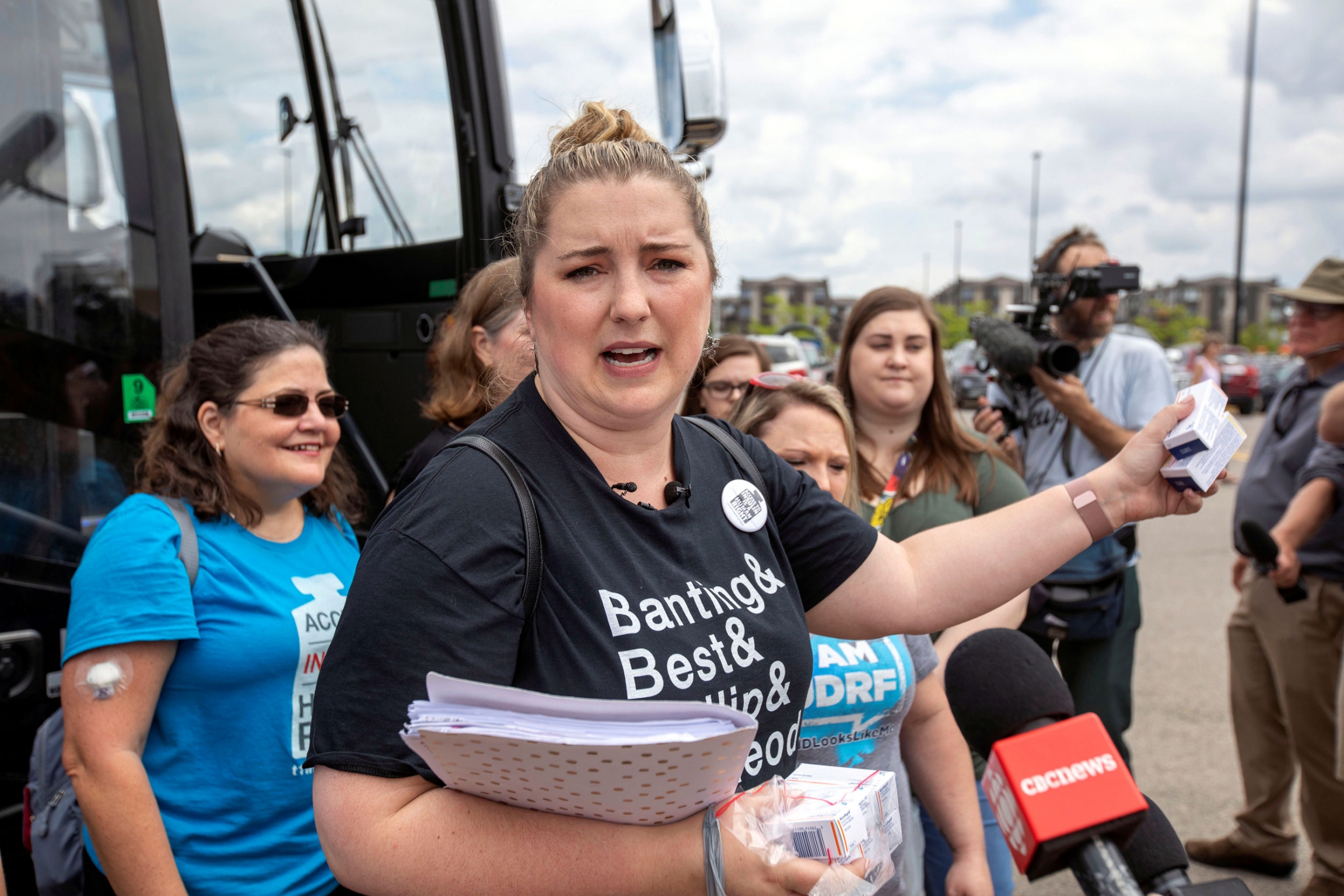 Quinn Nystrom, a diabetes advocate from the United States, speaks with the media after purchasing lower-cost insulin at a Canadian pharmacy in London, Ontario, Canada, on June 29, 2019.

Leading health advocates mainly fear the potential of a mass drug importation from Canada, not the individual caravans of patients making the occasional trip across the border.

Nystrom, the Minnesotan with diabetes who leads some of these trips, said the caravans remain small.

“On our second trip, we had a free 55-passenger bus going all the way from Minneapolis to London,” she said. “We had 15 people on that bus.”

They couldn’t fill the seats, despite offering financial assistance to participants to cover hotel costs. She said people aren’t flooding to Canada even with a free ride: those who can’t afford the high cost of drugs in the US also can’t afford to make the trip.

“They could not take a day off work,” she said. “They couldn’t afford childcare.”