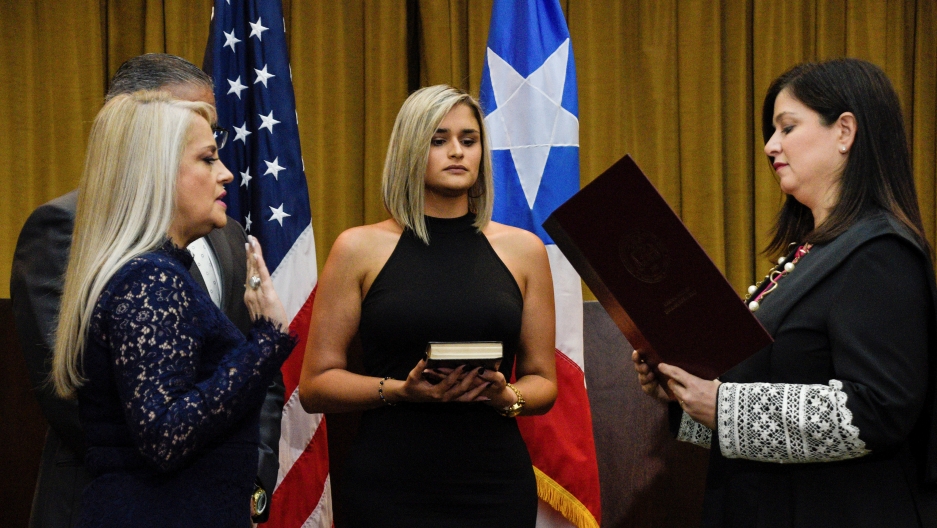 The revolving door at the governor's office in Puerto Rico may finally stop with Wanda Vázquez, the newly sworn-in chief executive of the bankrupt US territory, who said on Thursday she has no plans to resign.

On Wednesday, Vázquez became Puerto Rico's third governor in less than a week, after Gov. Ricardo Rosselló, who took office in 2017, stepped down on Friday, and his hand-picked successor, Pedro Pierluisi, was removed by the island's Supreme Court.

The nine-member court on Wednesday unanimously ruled that Pierluisi's assumption of the office was unconstitutional because the Puerto Rico Senate had not confirmed his July 31 appointment by Rosselló as secretary of state, the post that is next in line for governor under the territory's constitution.

The high court's ruling followed weeks of political turmoil, with Rosselló, on July 24, announcing his intention to resign after several days of protests.

Eduardo Bhatia is the minority leader in the Puerto Rico Senate and has announced a run for governor in 2020. Bhatia spoke with The World's Marco Werman about the future of Puerto Rican democracy.

Marco Werman: What are your thoughts about Wanda Vázquez? A week ago she said she didn't want to be governor. How does this look for what happens next in Puerto Rico?

Eduardo Bhatia: Well, I mean her position, I think, and her statements, have been part of the rollercoaster that Puerto Rico has lived over the course of the last two weeks. First, a popular uproar by citizens. And the Supreme Court yesterday, 9-0, decided that Mr. Pierluisi, who had replaced Mr. Rosselló, had taken the oath of office illegally. So he was replaced then by the attorney general, Secretary of Justice Wanda Vázquez. I mean this is, to be honest, Marco, a plot that that not even on "House of Cards" you could see.

There's still a political crisis and there doesn't really seem to be a clear pathway to what Puerto Rico's future would be. Can you make the argument why any politician would want to be the governor of Puerto Rico right now?

Let's put this in the context not just of the political crisis. Puerto Rico is also in a financial crisis. We filed for bankruptcy. Second, Puerto Rico was a center of a very severe hurricane in August 2017 and many families are still waiting to get the necessary help to rebuild their homes. There are still over 50,000 families — 50,000 — that have these blue tarps on their rooftops because they don't have a roof. Federal aid has been allocated for Puerto Rico but is not flowing in. And the reason that the federal government is not really allocating the funds to Puerto Rico — they claim it has to do with instability, the local political instability. And part of the new governor — and part of why I want to be the new governor — has to do with the fact that there are many adults in Puerto Rico and there are many people who can provide the kind of leadership that Puerto Rico needs right now to overcome, or at least to make the government a stable place for progress to take place.

The sense I get is that citizens in Puerto Rico are just fed up with mainstream politics and politicians altogether. So, what kind of anger do you face as a politician who's been in the business for 20 years in Puerto Rico?

A lot of people are very angry out there. Citizen anger is at an all-time high in Puerto Rico. And in so many other places in the world. I think that democratizing the democracy of Puerto Rico — allowing citizens to introduce bills and having citizens initiatives — is part of the conversation that we have to entertain in Puerto Rico. And part of why I am pushing forward not only my candidacy but, you know, opening up the political process, opening up the primary process and basically encouraging anyone and everyone who wants to participate in politics in Puerto Rico to run for office. I think Puerto Rico needs someone to push a button and say, let's restart and let's build something on the democratic premises and values that we all share.

If next week Puerto Ricans are back in the streets dissatisfied with Gov. Wanda Vázquez, what do you say to them?