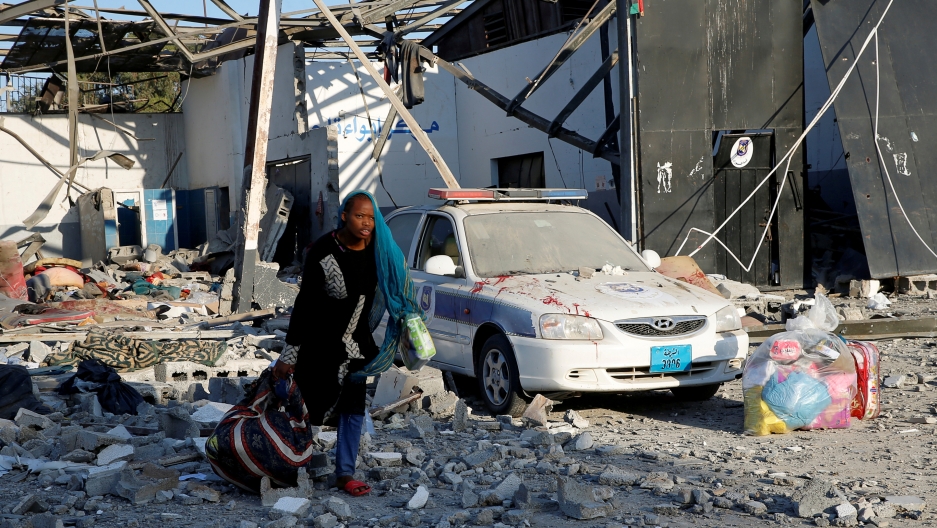 A migrant picks up her belongings from among rubble at a detention center for migrants mainly from sub-Saharan Africa. The center was hit by an airstrike in the Tajoura suburb of the Libyan capital of Tripoli, Libya, on July 3, 2019.

Observers inside Libya’s detention centers for migrants and refugees use words like “nightmarish,” “inhuman” and “hellish” to describe the dirty, over-crowded facilities where torture, rape and other horrors have taken place.

Detainees, mostly migrants from sub-Saharan Africa who got caught in Libya on their way to Europe, complain of hunger, disease and forced labor. Thuggish guards allegedly beat and flog them, amid the chaos of Libya’s spiraling civil war.

Despite repeated pledges to shutter Libya’s detention centers for migrants and refugees, they remain open, in what campaigners describe as a collective failure of Libyan officials, the United Nations and the European Union.

On July 2, a detention center on a military base at Tajoura, a suburb of Tripoli, the capital, was hit in a double military strike that left 53 detainees dead and more than 87 others injured.

On the day of the attack, scared detainees tried to flee the carnage, but guards kept the doors locked, blocked windows and shot at those who tried to exit. The second, deadlier strike came minutes later. 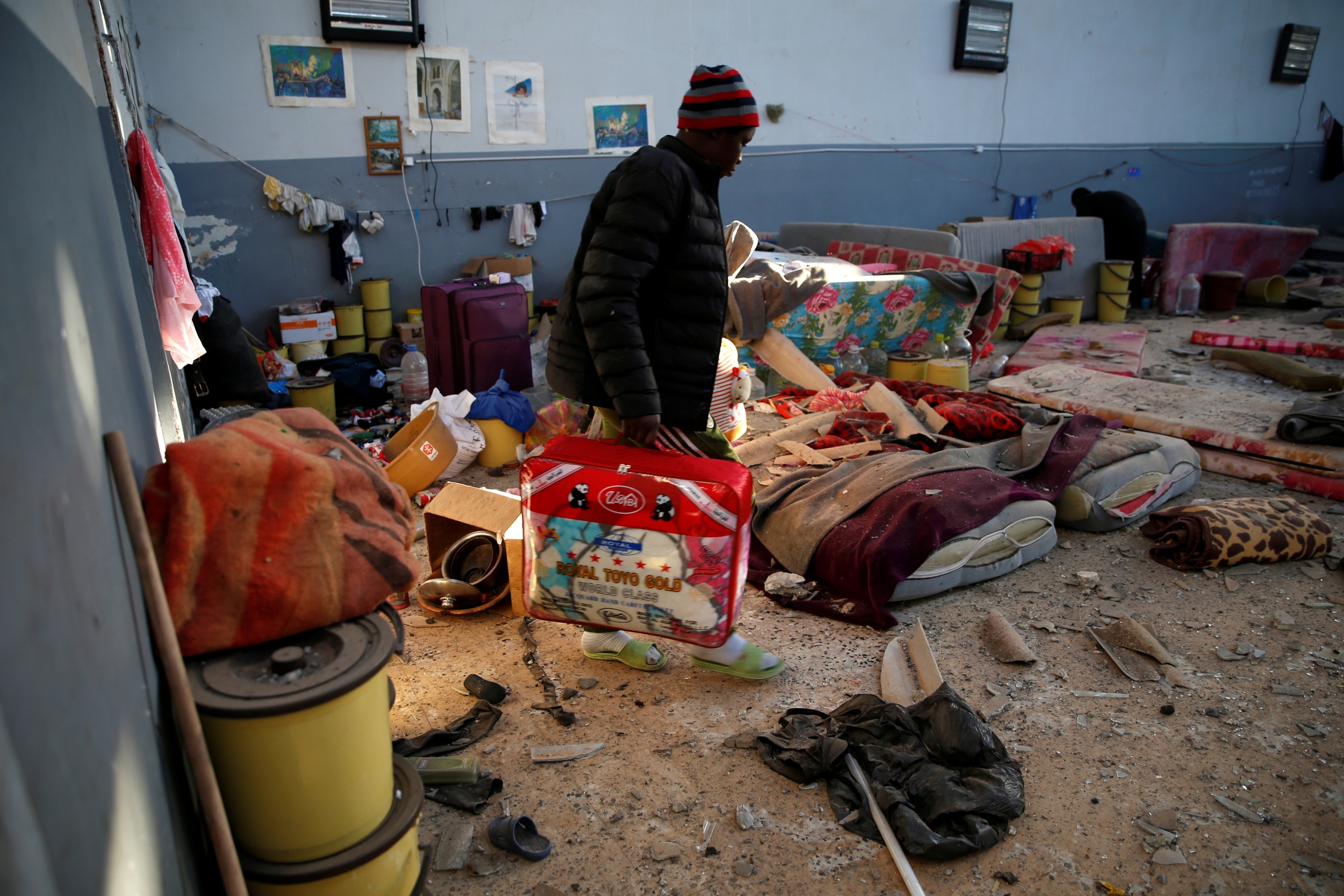 A migrant carries his belongings at a detention center for migrants mainly from sub-Saharan Africa, that was hit by an airstrike in the Tajoura suburb of Tripoli, Libya, July 3, 2019.

After the Tajoura tragedy, officials from Libya’s United Nations-backed Government of National Accord (GNA) promised to shutter detention centers. The European Union and the United Nations agreed that it was time to close them once and for all.

Authorities moved the 600 Tajoura detainees to a UN migrant processing facility in Tripoli, but within weeks, some 200 detainees were again locked up. Little changed at the other 18 facilities nominally under GNA control, housing a total of about 5,000 refugees and migrants.

Tajoura’s new inmates include migrants picked up by Libya’s coast guard after their vessel capsized in the Mediterranean Sea on July 26 — a disaster claimed the lives of 150 passengers when they drowned.

“These are awful warehouses for stocking commodities, not human beings."

“These are awful warehouses for stocking commodities, not human beings,” Vincent Cochetel, the special envoy for the Central Mediterranean situation at UNHCR, told The World. 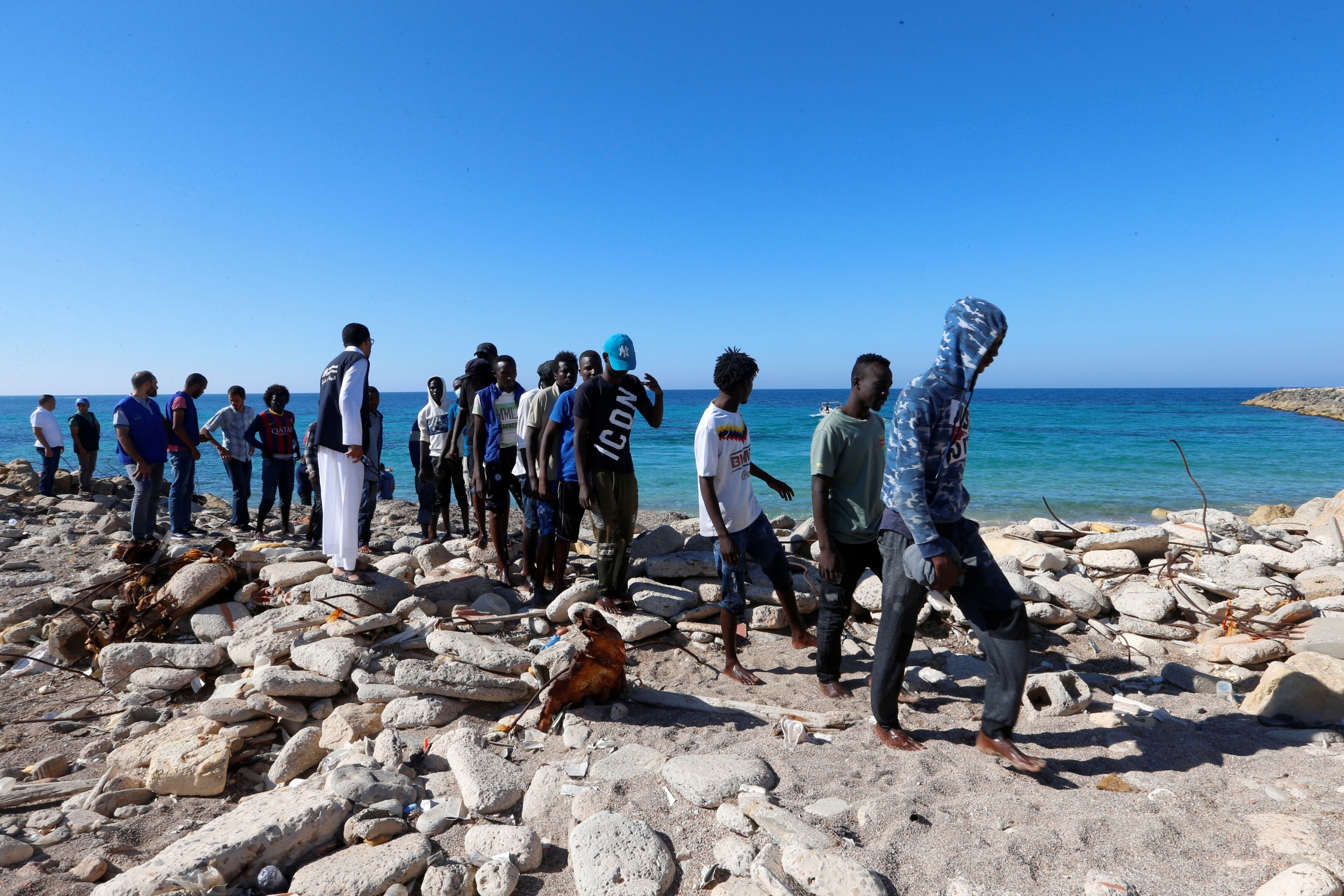 Migrants from sub-Saharan Africa are seen after being rescued by Libyan coast guard in Tripoli, Libya, July 26, 2019.

More than 600,000 refugees and migrants are currently in Libya, with about 5,000 held in GNA centers. Detainees are not technically criminals and no formal charges have been brought against them, but they were caught entering or exiting Libya without legal papers.

Some 3,800 of them are close to the front lines of fighting in Libya’s civil war. Inmates frequently say they can hear heavy caliber guns firing nearby. A tragedy like Tajoura could happen again tomorrow, Cochetel said.

The strikes on Tajoura occurred after renegade military chief Khalifa Haftar and his self-styled Libyan National Army (LNA), which gets support from the United Arab Emirates, Egypt, France and others, launched an attack in early April to seize control of Tripoli.

Related: Khalifa Haftar history in Libya and US before Tripoli invasion

While pro-GNA forces weathered the initial LNA attack, fighting has ground to a stalemate on the outskirts of Tripoli, with both sides resorting to air attacks in recent weeks. The GNA blames the LNA for the Tajoura strike and consequent deaths, a charge the LNA denies.

“Enough is enough because people can just die from bombing those detention centers,” Cochetel said by phone from Tunisia. “Let’s assist those people out. It’s doable. We do it in other countries — so why not in Libya?”

A UNHCR plan involves the “phased and orderly” release of batches of inmates from detention centers and resettling them in western Libya’s towns and cities, with support from aid groups, Cochetel said.

Women and children would go to a new, open facility in Janzour, west of Tripoli.

The UN’s envoy to Libya, Ghassan Salame, floated the plan to the UN Security Council on July 29, urging envoys to press Tripoli to “take the long-delayed but much-needed strategic decision to free those who are detained in these centers.”

The Security Council has yet to act. Some GNA officials may be taking steps anyway. Interior Minister Fathi Bashagha has announced plans to close lockups in Tajoura, Misrata and Khoms in what Cochetel calls a response to international censure.

“This is a source of embarrassment and condemnation for the country and some authorities take the view that there’s too much bad press from these detention centers and there are other ways to manage migration pressure,” Cochetel said.

Still, progress will be slow, he added. Some detention centers are run by local militias who do not always follow Bashagha’s orders. Some guards and managers have financial stakes in keeping detention centers open and pocketing cash from forced labor schemes.

HRW researchers highlighted the case of Abdul, a teenage refugee from Sudan. Guards at al-Karareem detention center, near Misrata, beat him on the soles of his feet with a hose after an attempted breakout by other inmates, they said.

Related: Will a German investment in Ghana's youth slow down migration?

HRW also bashed the European Union for funding a scheme that sees Libya’s coast guard intercept migrant boats at sea before returning those found onboard to the turbulent North African country, and holding them in places like Tajoura.

EU spokesperson Maja Kocijancic said that caging migrants was “completely unacceptable” and that Libya’s lockups should be shuttered, but that the bloc would continue funding a coastguard scheme that stops migrants from reaching Europe.

“Our priority is saving lives at sea and putting an end to the cruel and inhumane business mode of the smugglers,” Kocijancic, the bloc's spokesperson for foreign affairs and security policy, told The World.

“We engage with the Libyan coast guard and provide training, including on human rights, to enhance their capacity to save people’s lives and make Libyan territorial waters more secure for everyone.”

But Judith Sunderland, a director for Europe and Central Asia at HRW, said the EU should go further and take responsibility for search-and-rescue sea operations and ensure that no rescued migrants are sent back to Libya.

The bloc should “press Libyan authorities to release all arbitrarily detained migrants” and strengthen UN schemes to evacuate migrants and refugees out of Libya, including settling more of them in European cities, Sunderland said.

“We hoped that the tragedy at Tajoura would have given some real impetus to pledges that were made, but we haven’t really seen that."

“We hoped that the tragedy at Tajoura would have given some real impetus to pledges that were made, but we haven’t really seen that,” Sunderland said.

“There’s no excuse for not coming up with viable plans to release refugees and migrants and evacuate them to safer places, including Europe.”

Still, getting anything done is a challenge in Libya, which has seen little but chaos since the 2011 uprising that killed president Muammar Gaddafi and saw the country spiral into a civil war that continues today.

Addressing the council, Salame called for a truce despite the fact that neither side looked like it was going to “silence the guns.” With arms still flowing, he warned of a “full-blown civil war with serious, potentially existential consequences for Libya and its neighbors.”