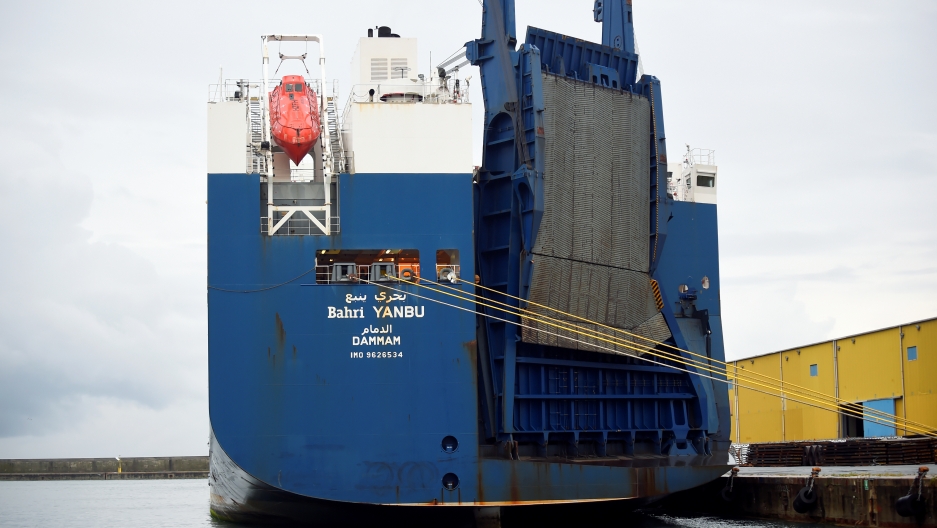 Since late 2018, activists have demonstrated at key ports in Europe and North America against the loading of weapons onto cargo ships — they're raising alarm over the plight of Yemeni civilians.

Saudi Arabia’s state-owned shipping company, Bahri, runs a fleet of container ships that carry bullets, bombs, guided missiles and armored vehicles that are used in the war in Yemen.

It deploys these cargo ships about every 25 days, says Brian Castner, a former journalist now working for Amnesty International in the US, who is tracking the ships' movements.

Their connection with the Yemeni humanitarian crisis is something that more people are now realizing, and taking to heart, says Castner, who is based in Buffalo, New York.

"A lot of average people in Europe are saying, 'We do not want to be a part of this.' And so the protests started, and people are saying, 'I do not want the ports in my country being used to facilitate what's going on in Yemen.'"

"A lot of average people in Europe are saying, 'We do not want to be a part of this.' And so the protests started, and people are saying, 'I do not want the ports in my country being used to facilitate what's going on in Yemen.'"

Activists in France and Italy have been the most organized, with labor and peace groups combining forces at the docks.

Every month, a Bahri vessel arrives in North American ports, such as in Wilmington, North Carolina, and Saint John, New Brunswick, Canada, and picks up military cargo. From there, the ship sails across the Atlantic, making stops in Belgium, the UK, France, Spain and Italy. Finally, the Bahri ship unloads at ports in Saudi Arabia and the United Arab Emirates.

On Friday, marine trackers showed the Bahri Abha cargo ship working its way around the US East Coast. 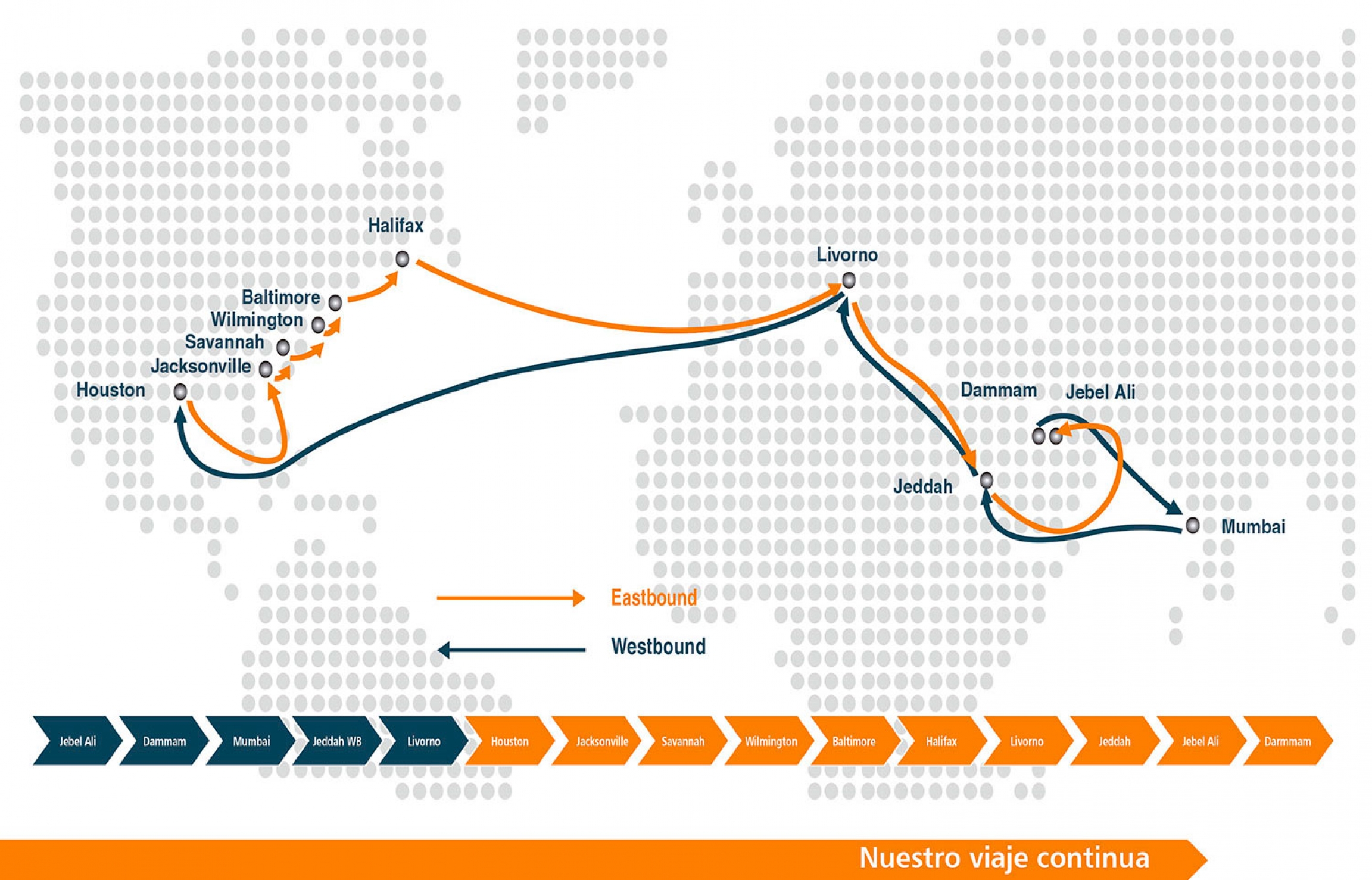 A violation of the Arms Trade Treaty?

Saudi Arabia and the UAE have been fighting a rebel group that took control of Yemen’s northern cities, including the Yemeni capital, since March 2015. Many innocent Yemenis have died in attacks that use Western-made weapons, and protesters point to thousands of civilian casualties as evidence of war crimes. Despite international efforts this year to arrange a ceasefire, fighting in Yemen continues.

“Italian unions refused on Monday to load electricity generators onto a Saudi Arabian ship with weapons on board in a protest against the war in Yemen.

On July 24, US President Donald Trump vetoed a resolution that would have prevented the fast-tracked delivery of Raytheon-built smart bombs to Saudi Arabia and the United Arab Emirates. This past Monday, the Senate failed to override his veto.

The same day, 10 civilians were killed in an airstrike on a Yemeni marketplace. The United Nations and human rights organizations such as Amnesty International and Human Rights Watch say US-supplied weapons are being used in violation of the United Nations' Arms Trade Treaty, a pact that Trump says he plans to quit.

"French weapons in Yemen," this tweet reads. "A Communist deputy suspects the Bahri Yanbu, expected in Le Havre, to "ship French-made artillery pieces to the Saudi port of Jeddah."

European protests began this spring following reports by the French investigative group, Disclose, that a government-owned weapons manufacturer, Nexter, shipped Caesar guns, truck-mounted artillery used by the Saudi army firing into Yemen. The Caesers were to be shipped by the Bahri company, and the Bahri Yanbu would soon arrive at a French port. Activists shared the Bahri shipping schedule, which showed that the Bahri Yanbu would get to Le Havre, France's largest container port, on May 7.

@VanessaBeeley ⚠️ on May 5th (Sheerness) May 7th, the cargo bahri yanbu of the Saudi maritime company will be in harbours surely to embark weapons. The survey "made in France" showed that the cargo trucks of the Bahri company transported weapons to Saudi Arabia.
@disclosetv pic.twitter.com/UbwWlW6ppo

“I learned that the Bahri Yanbu should make a stopover in France in the Port du Havre. And when I learned of the risk that a Saudi vessel [would] load a weapon in a French port [that could be] used in Yemen ... I did a Twitter message and the reaction was immediate.”

Aymeric Elluin of Amnesty France posted an alert on Twitter that the Saudi vessel was en route.

“I learned that the Bahri Yanbu should make a stopover in France in the Port du Havre,” said Aymeric Elluin of Amnesty France. “And when I learned of the risk that a Saudi vessel [would] load a weapon in a French port [that could be] used in Yemen ... I did a Twitter message and the reaction was immediate.”

Elluin's tweet read: "KSA [Saudi]/UAE/Yemen arms sales: This is currently in Belgium and with the same Saudi shipping company identified by @disclose, the next question, is a stage in Le Havre planned?“

People attend a demonstration to protest against the loading of weapons aboard the Bahri-Yanbu, a cargo ship operating for Saudi Arabia's defence and interior ministries, in Le Havre, France.#YemenEdgehttps://t.co/GF2B0WrPpc

Throughout the two-day vigil at the Le Havre port, the Bahri Yanbu circled 15 miles offshore without docking. Protesters declared victory. But the big, French guns were rumored to have been transported by land to Italy. Italian peace groups, along with longshoremen, prepared to meet the Bahri Yanbu at Genoa, Italy.

In Genoa, Italian protesters were ready.

“For the first time, the dockworkers decided to organize with NGOs and their social associations. They started protests in the port and they were working together."

“For the first time, the dockworkers decided to organize with NGOs and their social associations,” said Tina Marinari, a peace activist from Rome, referring to groups like Potere al Popolo (PaP) (Power to the People) and the CGIL (Italian General Confederation of Labor) and the dockworkers' union. “They started protests in the port and they were working together."

In the end, the Bahri Yanbu failed to load its cargo at Genoa on May 20; instead, it sailed to the military dock at La Spezia, where it was rumored to have taken delivery of the Caesars.

'One crisis after another'

Medea Benjamin, co-founder of the American anti-war group CODEPINK, has been following the news from Europe closely. She says the combination of labor and peace activism is powerful, but it has yet to get traction in the US.

CODEPINK has taken a stand against US weapons sales to Saudi Arabia and staged protests at the headquarters of defense contractors such as Raytheon, Lockheed Martin and Northrop Grumman. But their impact is hard to measure.

"We don't have a strong enough movement to make these really as significant as they should be given the level of the crisis."

"They're not big enough," Benjamin said. "We don't have a strong enough movement to make these really as significant as they should be given the level of the crisis."

Benjamin, who has long advocated for an end to US support for the Saudi-led intervention in Yemen's civil war, says US activists are spread thin in the Trump era. "Since the time Donald Trump came into office, it's been one crisis after another that has given us whiplash. And it makes it very hard to put the attention we need to put into the Yemen crisis and get enough support from the grassroots to be strong enough to have severed US ties."

Instead, CODEPINK has joined with other activist organizations lobbying Congress to pressure the White House to halt weapons sales that impact the Yemen war. "We've collectively been putting a lot of energy into what has been quite successful attempts to change the attitude in Congress and as well as the votes," she said.

North America exports much of the weaponry used by the Saudis and Emiratis. Publicly available US Customs records show that five of the US ports serviced by the Bahri line export weapons purchased by Saudi Arabia. The Military Ocean Terminal Sunny Point (MOTSU) in Wilmington, North Carolina, exports the most.

Screenshot of USA Trade Online showing weapons exported from Wilmington, North Carolina, to Saudi Arabia and the United Arab Emirates, from January 2018 to May 2019.

Customs data from 2018 through June this year reveals that North Carolina's Sunny Point port, alone, loaded billions of dollars worth of military vehicles, guided missiles and bombs bound for Saudi Arabia and the UAE. A North Carolina port official confirms that all of the military cargo was loaded onto Bahri ships.

The movement against the circling Saudi ships hasn't seen a lot of traction in the US, but north of the border, Canadian activists rallied at the end of 2018.

News that General Dynamic LAVs — Light Armored Vehicles — were to be loaded on a ship bound for Saudi Arabia had caused a stir on both ends of the political spectrum, from the socially progressive Council of Canadians, to the ultra-conservative Cultural Action Party.

"The Saudi-flagged cargo ship Bahri Yanbu will be greeted by protesters trying to prevent the shipment of these vehicles, which have been used in Riyadh’s war in Yemen."https://t.co/t07P86Qb89

On Dec. 22, the morning after the winter solstice and far enough north so the sun did not rise until after 8 a.m., activists, do-gooders and the curious set up a picket line at the gate in front of the port of Saint John in New Brunswick.

“We were on the picket line first thing in the morning,” said Wayne Dryer, a former Baptist minister who lives in Saint John. “I'm estimating between 20 and 30 of us, so it didn't generate a whole lot of media attention.”

Norm Knight, a freelance journalist from Fredericton, New Brunswick, drove 60 miles to get to the rally. He says that the picketing began before longshoremen arrived that morning.

At about 7:30 a.m., he says, members of the International Longshoremen’s Association arriving for work refused to cross the picket line.

“They lost a day's wage. ... And they faced disciplinary action. So, here we are a bunch of do-gooders, in a sense, who created a little bit of a profile in the media.”

“They lost a day's wage,” Dryer said. “And they faced disciplinary action. So, here we are a bunch of do-gooders, in a sense, who created a little bit of a profile in the media.”

But the Bahri Yanbu never appeared that day. “As it turns out, the weather was bad and they weren't able to get into the harbor. So, we did our protest and the ship wasn't even there to be affected.”

The Bahri Yanbu docked at 1 a.m. the next morning, and its own crew members loaded the General Dynamics Light Armoured Vehicles (LAVs). The ship continued on to European ports, docking in Jeddah, Saudi Arabia, three weeks later, without incident.

Even when the protests don't go as planned, though, activists say they are hopeful about getting their message out.

The World contacted Bahri representatives in Houston, Wilmington, Baltimore, Toronto and Montreal. Those that we reached were unable to comment.