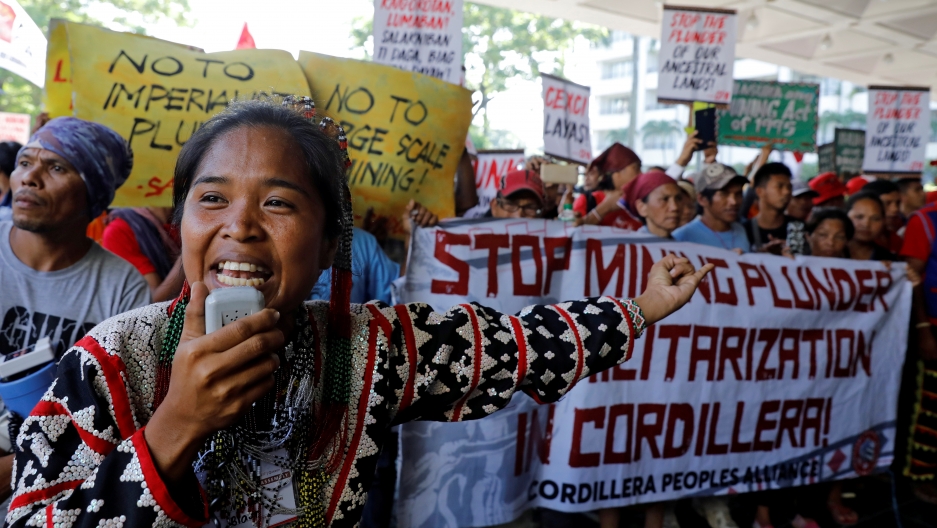 An anti-mining protester speaks during a rally outside a hotel where an annual mining conference is held in the Philippines.

The international nonprofit Global Witness has released an annual report on attacks against land and environmental defenders and has found that the Philippines is the deadliest country for these activists, averaging more than three deaths a week. In total, 164 activists were killed in 2018. A significant number of attacks on environmental activists are linked to the mining industry, as well as hydropower, agribusiness and logging projects. Additionally, many activists in the Philippines face death threats, intimidation and arrests.

Jaybee Garganera: Being an activist is already difficult, in general, here in the Philippines. Being an environmental activist puts additional challenges in the work. When we go down south in Mindanao, the southern part of the Philippines where most of the mines are located, the challenge of martial law in the Mindanao region poses additional risks for us environmentalists. Martial law is still in effect in Mindanao and that's problematic because the presence of the military in many of the communities affected by mines, logging or plantations are easily justified. When you have opposition to these projects it's easy for local communities to be tagged as bandits or rebels or communist insurgents and that adds another layer of complications to local communities.

Related: Assassins murdered Honduran activist Berta Cáceres. Her mother and daughters have taken up the fight.

Marco Werman: Have you as an activist ever been threatened? Can you talk about one episode, what happened and who did it?

Yes, I've had several strange calls and even death threats. The most recent and the scariest one happened about two years ago when the caller actually mentioned my car brand, color, and my plate number and they knew the village that I was residing in. Of course, I asked them why are were doing that and they said, "Why are you wondering? It's because you're up against powerful and big players here with what you're doing." What I have experienced is a very small incident of harassment compared to the daily threats and challenges faced by communities who day in and day out have to face the large-scale mining companies or the power plants or the large plantation owners.

There were more than 150 land defenders and environmental activists killed last year in the Philippines. I want to know more about who's behind that. Let's start at the top. We know Rodrigo Duterte, the president, has taken a zero-tolerance approach to drugs. What are his feelings about environmental activism?

Well, as president he has given the impression that he's an environmentalist but he has not been able to stop one single mine. You have this signal from the president that human rights is a low priority and that is sending the message to large business interests that those who are opposing mining or opposing logging or opposing plantations are open season to be intimidated and harassed and eventually be silenced.

Are you saying that the perpetrators are somehow connected to the mining companies or to the military stationed in these mining communities? And how do you know that?

We do have two cases that have been documented. One is up north in a mine owned by Oceana Gold and this mining contract expired a month ago but it's still operating. The other case down in Mindanao actually resulted in a military court being convened because of the involvement of the military in the murder of the family of a leading Indigenous person who was leading the anti-mining campaign.

What keeps you motivated as an environmental activist in the Philippines?

My exposure during college was working with indigenous peoples and I saw how beautiful our natural resources were. I've also seen the impacts of mining and logging. I simply want a better future for my children. I want to be able to tell my grandkids and we did something to prevent total environmental destruction.