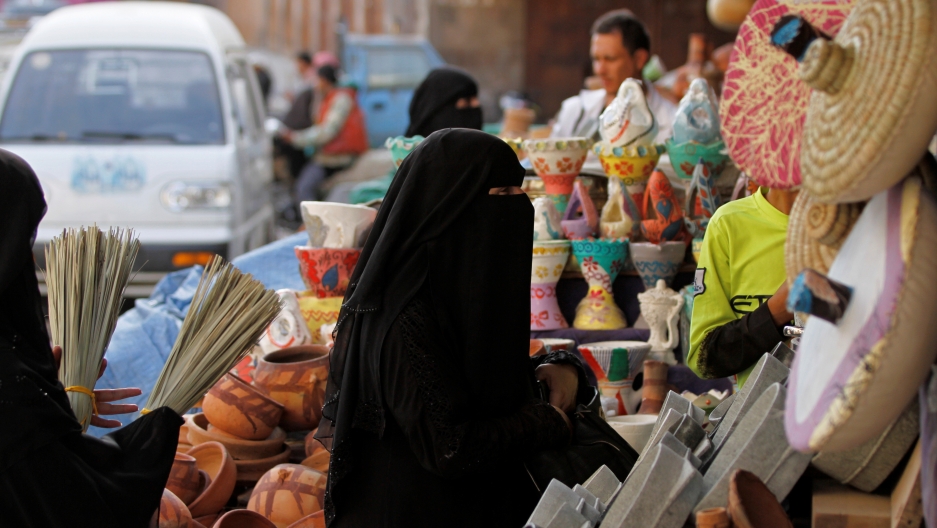 Azal held her breath and hoped the burqa she was wearing would be enough to evade detection at the nearly two dozen checkpoints that lay ahead. If everything went according to plan, she would soon be in Sudan.

Getting in the back of a pickup truck with a strange man posing as her husband was just the beginning of her harrowing escape from Yemen.

“I never imagined this would be my life,” said Azal, who asked that her last name be withheld for her family’s safety.

More than four years of war between the Houthi movement and the Saudi-backed, internationally recognized government has ripped Yemen apart and led to the world’s worst humanitarian disaster. Houthis, backed by Iran, have captured large swaths of the country, including the capital city, Sanaa, from pro-government forces. In those areas, rights groups say Houthis have escalated their crackdown on public displays of dissent.

Related: Cheap drones are changing the calculus of war in Yemen

In October 2018, Houthis arrested Azal, then 21, along with dozens of other university students who attended a protest against poor living conditions in the capital, according to Rasha Rashid Jarhum of the Peace Track Initiative. In prison, guards severely beat her and accused Azal of belonging to ISIS. 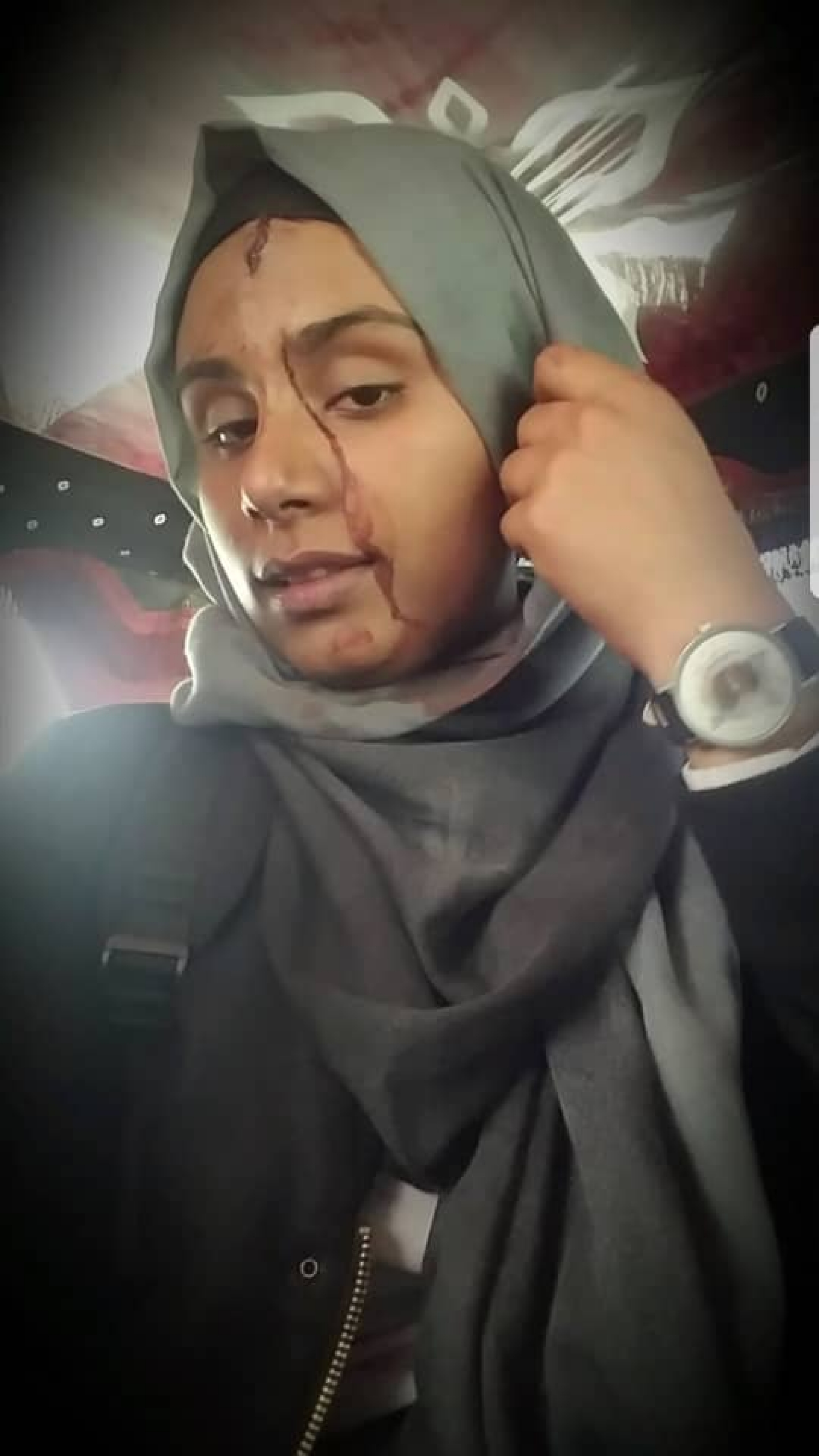 Azal documented her beatings from Houthi prison guards in this photo taken on her phone in October 2018.

Released after 12 hours with a bloodied face and a warning, Azal knew she needed to leave her city — and fast.

“The Houthis [then] asked my university to hand me over. They were outside my house day and night. I was driven out of the country, forced to run from one house to the next.”

“The Houthis [then] asked my university to hand me over. They were outside my house day and night,” she remembered. “I was driven out of the country, forced to run from one house to the next.”

Some 6,000 miles away in Ottawa, Canada, Rasha Rashid Jarhum had begun coordinating Azal’s escape through the messenger service, WhatsApp.

“We were asking her, what are the options? We told her, once you think you can safely relocate and once you arrive in Marib, just contact us,” Jarhum said.

For more than 15 years, Jarhum has been working on human rights and gender issues for organizations including UNICEF and Oxfam.

In 2015, Jarhum launched Peace Track Initiative, a nonprofit that advocates for the inclusion of women in the Yemeni peace process. The organization’s work has since expanded to include protecting Yemeni women, as well.

Jarhum is a founding member of the Women Solidarity Network, a coalition of 250 Yemeni women and women-led organizations working on the protection of women and peacebuilding in Yemen.

"We have supported many women human rights defenders in providing safe exit to neighboring countries, assisting in filing for asylum, and seeking resettlement in third countries," Jarhum said in a brief to the UN Security Council session on Yemen in late 2018.

Today, a small but committed group of activists have worked with Jarhum to facilitate the relocation of 14 Yemeni women to regional host countries including Egypt, Turkey and Malaysia.

Jarhum acknowledges that these women represent a fraction of the women in need of help, but her organization lacks funds to do more at this time. Unable to staff a hotline, Peace Track Initiative takes referrals on a case-by-case basis depending on the gravity of the threat.

The women referred to Peace Track Initiative tend to be in their 20s, politically active and living in areas under Houthi control. According to Jarhum, Houthis placed many under house arrest after participating in demonstrations.

“We have received cases of detained women who were tortured and sexually abused in Houthi prisons. Women are beaten even if they ask for sanitary pads.”

“We have received cases of detained women who were tortured and sexually abused in Houthi prisons. Women are beaten even if they ask for sanitary pads,” Jarhum said.

Others were targeted for their secular beliefs by groups like al-Qaeda in the Arabian Peninsula (AQAP). In Aden, religious extremists vandalized a women’s sports center, and Peace Track Initiative supported the staff’s relocation to Egypt.

Jarhum protects Peace Track evacuation methods out of fear that Houthi and other armed groups will catch on. But she did shed light on Azal’s carefully choreographed escape route. 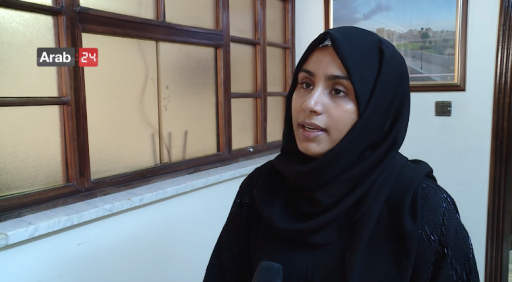 Azal set out on her journey last October with just a small bag and a cellphone. Another woman who faced similar threats joined her. Together, they paid her travel mate’s male relatives $200 to drive them 12 hours east to Marib, which falls outside Houthi control. They posed as members of a nomadic Bedouin tribe, knowing that women from rural areas are generally perceived as harmless and would not be asked to show identification at checkpoints.

They stayed in a hotel in the city for two months before they started to run low on the money Jarhum had wired to them. Using what remained, they traveled to the port city of Aden. From there, Peace Track Initiative purchased plane tickets for the women to travel to Sudan, one of the few countries where Yemenis don’t need visas. It was Azal’s first time on an airplane.

“I cried the entire flight thinking of how I left my hometown,” Azal said over WhatsApp.

Across Houthi-held parts of Yemen, Peace Track Initiative and local monitoring groups have documented the widespread, arbitrary detention of opposition women. They accuse Houthi forces of arresting women who speak out against them, holding them on baseless prostitution charges and extorting their families for money.

Such targeting of women is unprecedented, says Nesmah Mansoor, Peace Track Initiative’s communication and advocacy officer. The country’s tribal groups, she says, have long considered attacks on women a source of shame.

“Women have had the courage to go out because, in Yemen, it used to be a black shame to attack them. Everyone is so shocked by what [the Houthis] are doing because we’ve never experienced this.”

“Women have had the courage to go out because, in Yemen, it used to be a black shame to attack them,” explained Mansoor. “Everyone is so shocked by what [the Houthis] are doing because we’ve never experienced this.”

News outlets and rights groups have also accused the Yemeni government and coalition forces of a range of human rights violations. A 2017 investigation by The Associated Press found as many as 2,000 men had disappeared into secret Yemeni prisons run by the United Arab Emirates.

But when it comes to women, arbitrary detentions are most common in Houthi-held areas, says Radhya Almutawakel, whose organization, Mwatana for Human Rights, tracks abuses by all sides of the conflict.

The Sanaa-based Yemen Organization for Combating Human Trafficking says arbitrary detentions happen on a near-daily basis. The number of women held without charge in secret prisons and forced to sign false confessions is growing, said the group’s founder, Nabil Fadel. 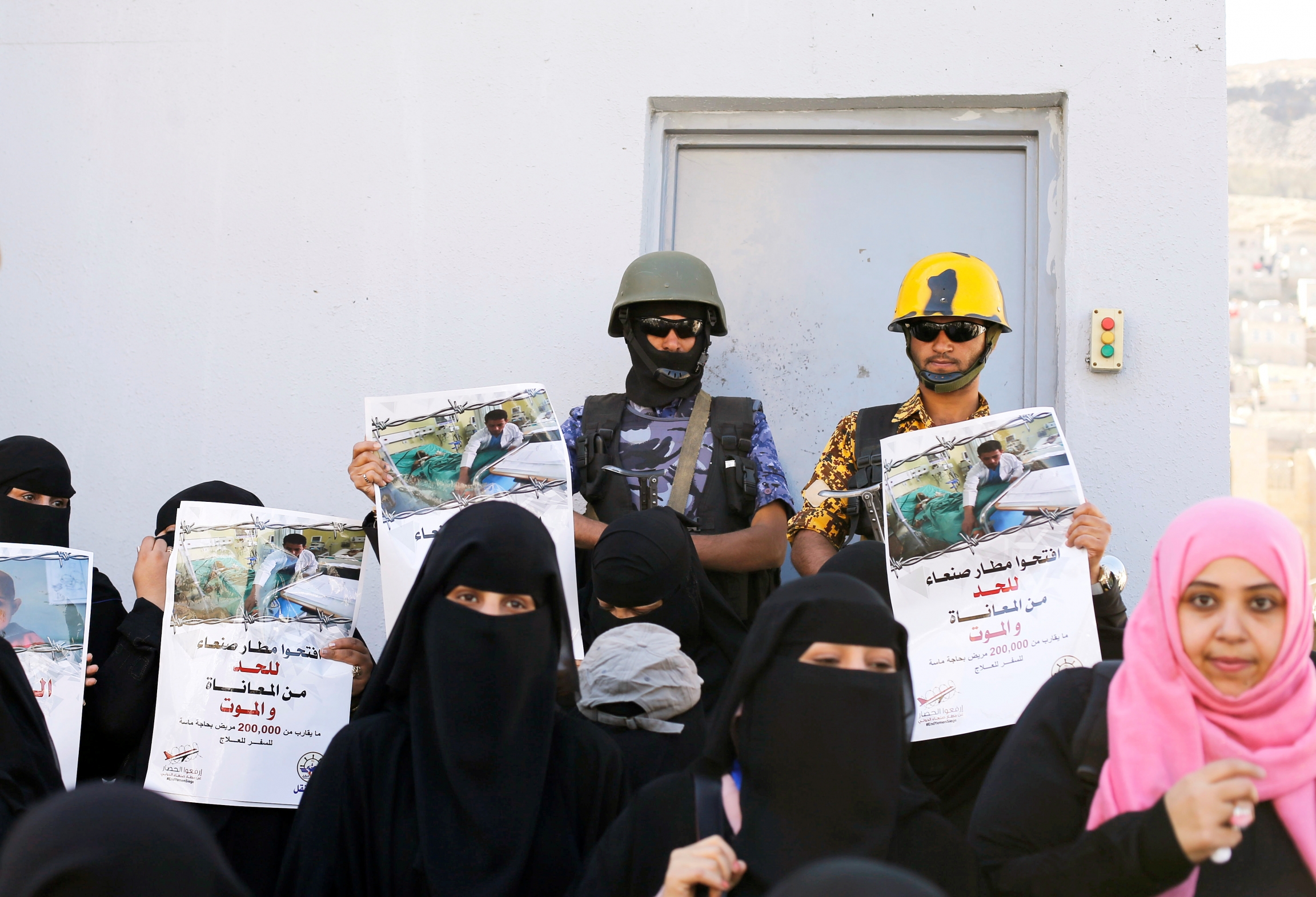 Police troopers secure a door of the United Nations offices as women demonstrate to demand the reopening of Sanaa airport in Sanaa, Yemen, Dec. 10, 2018. The posters read: "Open Sanaa airport to limit the suffering and deaths."

“It’s the worst nightmare for any Yemeni woman to be in this position. It will destroy their life, and it’s breaking the social fabric in Yemen.”

“It’s the worst nightmare for any Yemeni woman to be in this position,” Thaibani said. “It will destroy their life, and it’s breaking the social fabric in Yemen.”

Azal arrived in Khartoum, Sudan, days before deadly anti-government protests erupted across the country in December 2018. As the violence escalated, Jarhum felt that conditions weren’t safe for the two women and began looking at other countries where they could receive a visa upon arrival. Within a month, Azal and her travel companion boarded a plane for Seri Kembangan, Malaysia.

It’s been an isolating few months.

Without English language skills, Azal can’t attend school to complete her law degree. And without asylum status, she’s unable to work legally in Malaysia. But Jarhum is doing what she can to ease Azal’s transition by leveraging her connections to fast-track her for an asylum interview.

Peace Track is also working to secure emergency funds to support her in this transition.

“We see how brave they are,” Jarhum said. “They work hard to protect their families and communities. It is only fair that we try to protect them.”