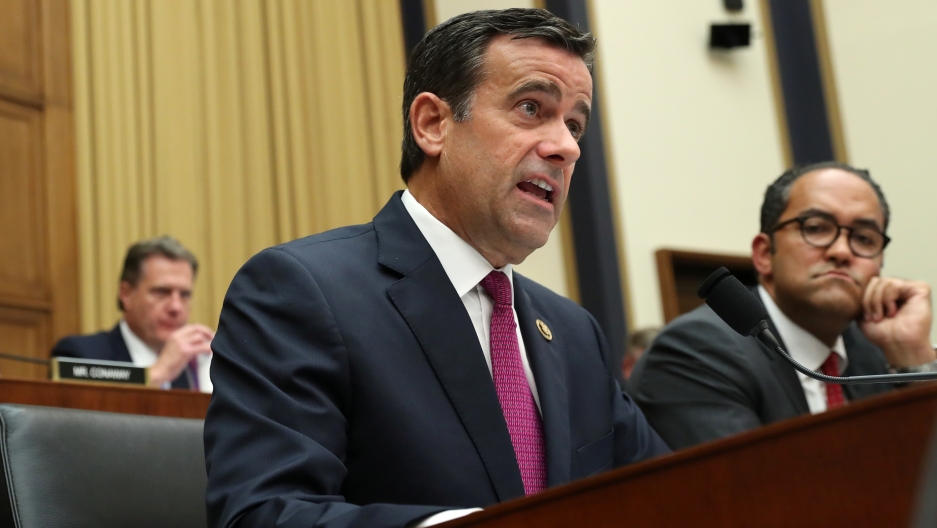 President Donald Trump said on Sunday he would nominate Rep. John Ratcliffe, a Texas Republican who strongly defended him at a recent congressional hearing, to replace Dan Coats as the US spy chief.

Coats, the current US director of national intelligence who has clashed with Trump over various assessments involving Russia, Iran and North Korea, will step down on Aug. 15, 2019.

Related: What can Mueller tell lawmakers?

The post of director of national intelligence, created after the Sept. 11, 2001 attacks on the United States, oversees the 17 US civilian and military intelligence agencies, including the Central Intelligence Agency. The DNI controls budgets and briefs the president daily on national security threats.

Related: Trump warned Tehran a US attack was imminent, called for talks

Ratcliffe, a member of the House of Representatives intelligence and judiciary committees, defended Trump during former Special Counsel Robert Mueller's testimony last week. He also accused Mueller of exceeding his authority in the report's extensive discussion of potential obstruction of justice by Trump after the special counsel decided not to draw a conclusion on whether or not Trump committed a crime.

The US Senate will have to confirm Ratcliffe as DNI. The World’s Marco Werman spoke to Carrie Cordero, a fellow at the Center for a New American Security in Washington, DC, about Ratcliffe’s experience and the likely outlook for the Senate hearings on his confirmation as director of national security.

Cordero says Ratcliffe has a "different background than the prior individuals who have served as director of national intelligence. All of the prior DNIs have either been intelligence professionals themselves, over decades of experience or have had long government careers in the executive branch, where they have been consumers of intelligence information. John Ratcliffe doesn't have as deep of a background as those other individuals. He has spent some time as a congressional overseer and he's been a US attorney in the Justice Department."

Marco Werman: That counts for something though, right?

Carrie Cordero: It does count for something. He's a member of Congress, he served on the intelligence committee; I don't think he had a long tenure there. As for his US attorney record, I would expect during his confirmation process that his record as US attorney will be scrutinized. He was the US attorney in the Eastern District of Texas. I can't immediately think of any major national security case that I'm aware of that was handled in that district while he was the US attorney, but I'm sure that record will be scrutinized during the confirmation process.

What would all this mean if he's confirmed, in terms of the safety of the average person out there, from things like foreign and domestic terrorism?

Remember, the director of national intelligence does not lead an operational National Security Agency. He sits up high and is implementing policy to make sure that the intelligence community is working properly. But he is responsible for the briefing that goes to senior policymakers and to the president. The concern is that high-level intelligence assessments, for example, threats about future foreign hostile-state efforts to interfere in our elections — which is a big-picture issue — he would be responsible for making sure that the best intelligence assessment gets to the president. Given, for example, his performance in the hearing of Special Counsel Mueller last week, where he really came across as quite partisan, the concerns that I think will be aired in his confirmation hearing pertained to whether or not he really is willing and capable of being an impartial communicator of a considered intelligence assessment or whether he will be malleable to the president's interests in determining what intelligence information is.

Donald Trump either denies or doesn't want to believe that the Russians were involved in the last election in hacking. He even said Putin told him they didn't do it and he believed them. Does Donald Trump want an intelligence "yes-man" next to him who will allow foreign entities to meddle in the next election?

Well, it certainly looks from his administration that he has gotten rid of — either through firing or forced resignations — cabinet leaders or senior advisers who have been willing to challenge him on these types of issues, including national security issues. We don't know whether or not he was considering removing Director of National Intelligence [Dan] Coats before or after he formed that task force focused on 2020 election security, but it certainly is a question that needs to be raised during the confirmation hearing. So far the president has been consistent in his lack of presidential leadership to develop a whole government strategy to counter election interference efforts.

The New York Times is reporting that Senator Richard Burr warned the White House that John Ratcliffe was too political for the job of DNI. How certain is Ratcliffe's confirmation at this point?

I think Chairman [Richard] Burr, the chairman of the Senate intelligence committee, issued a statement today saying that once Congressman Ratcliffe has been formally nominated, the committee will engage in its process according to regular order. Certainly, they'll take up the nomination. I did not read his statement to be a rousing endorsement, but we'll see how that process plays out.