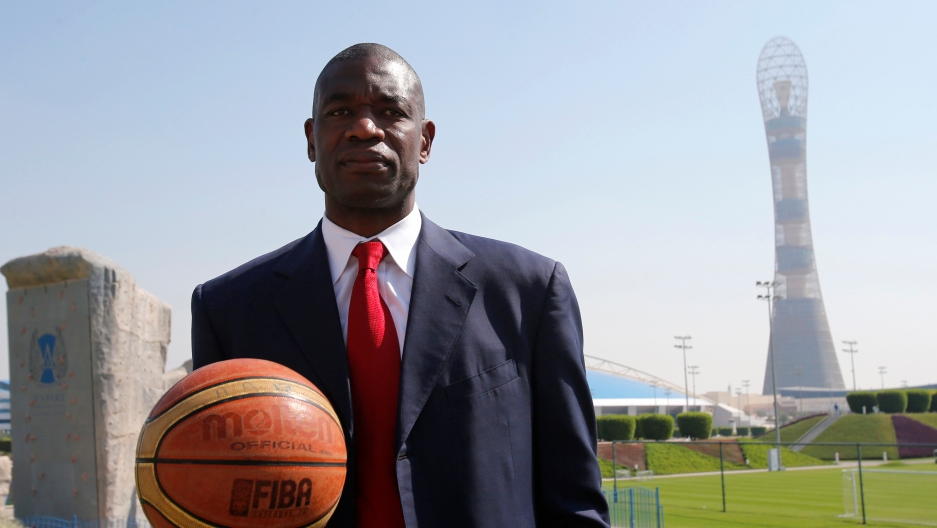 Former NBA star Dikembe Mutombo of the US poses before the start of a news conference at the Sports Congress and Exhibition at Aspire Dome in Doha, Qatar, Nov. 12, 2012.

Dikembe Mutombo was pretty famous among NBA fans in the 1990s and early 2000s. His 7-foot frame ruled the basketball court — racking up records and earning him a spot in the Hall of Fame.

But that pales in comparison to the celebrity and importance that Dikembe Mutombo has in his native Democratic Republic of Congo, where he has become a major influential force in public health.

In 1997, Mutombo established the Dikembe Mutombo Foundation (DMF), with a mission to improve the health, education and quality of life for the people in DR Congo. In 1997, the DMF oversaw the construction of a $29 million general hospital in Kinshasa, the capital, named after Mutombo's mother — the Biamba Marie Mutombo Hospital — that has treated close to 500,000 men, women and children.

Earlier this month, Mutombo traveled to DR Congo with a delegation of health experts and doctors. During the trip, Mutombo and the delegation visited Mbuji Mayi, the ancestral home of his late parents; he plans to build a school there. His foundation donated hospital beds and 200 malarial bed nets to several hospitals in the area.

Fighting Ebola is a current focus of Mutombo's extensive humanitarian work. The deadly virus has claimed the lives of at least 1,700 people in DR Congo in the last year. Due to internal armed conflict, misinformation and distrust, health officials have scrambled to contain the spread of the disease.

Related: What does the WHO Ebola emergency declaration mean for DR Congo?

In a recent public service announcement that Mutombo produced for DR Congo, Mutombo speaks directly into the camera and tells viewers that Ebola is real and offers tips on how to prevent it and get treatment.

In an interview with The World, Mutombo says, "I'm not going to stop spreading the word to educate my people until we understand their fighters have gone."

Upon his return to Atlanta, Georgia, where Mutombo lives with his wife, Rose Mutombo, and their three children, Mutombo sat down with The World's Marco Werman to talk about Mutombo's latest visit to DR Congo and the health initiatives there. 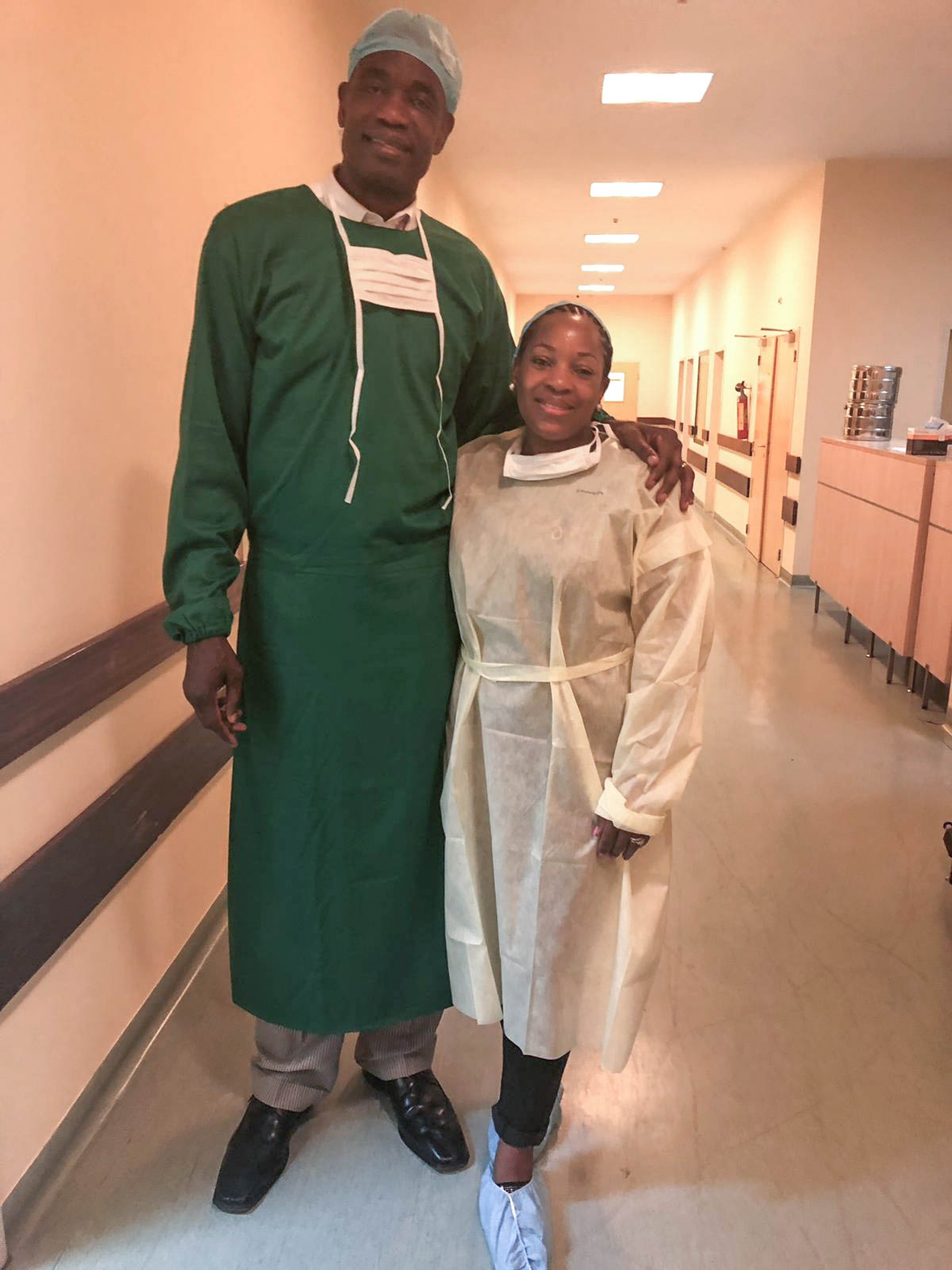 Dikembe and Rose Mutombo in a hospital in Kinshasa in July 2019.

Dikembe Mutombo: We followed these great doctors that traveled with me to the Democratic Republic of Congo to improve the living condition of my people by doing eye surgeries, fistula, breast cancer and women's cancer — it was great. And I was so happy to host them in Kinshasa. And also, I got a chance to travel [to the] south of Congo, where I went to the village where my mom and dad came from. I've never been there since I was born. So, it was my first time going there. It was very exciting to see everybody who came from the airport all the way through to the hotel where I was staying, standing on the street, waving to Dikembe Mutombo. It was great.

Marco Werman: You're speaking about the hospital. I know those surgeries are going to be seriously impactful for a lot of people. But there's also Ebola. Even this week, you probably know the health minister resigned over frustrations about how the response is being handled. How deep is the mistrust of the vaccine, of foreigners, even Congolese health workers?

I think the mistrust comes from the fact that people in Utuli, in the province where the pandemic has touched, they have suffered long enough from rape, violence and killing — almost for the last 20 years. They have not seen the outside world come to them to rescue them, to help them in [eastern] Congo. Then, suddenly, the virus came in, the pandemic of Ebola came in ravaged the entire region. Then we see more Jeeps and four-by-fours being driven by people with their white coats — that we've never seen before. So, those people are wondering, "OK, you came now, you want me to be treated. Where were you when my wife, my daughter, my son were being killed or being raped? Why you never came for twenty years?" I think that is where the frustration is coming in. It will take a little bit of time for the population to understand that these people came here to save your life, came here to rescue you, came here to improve your living conditions and protect you. All those things will happen with education. We just need to gain trust from them. And I'm so happy that more people have joined me on this call to alert and wake up our people in the [eastern] Congo to trust those people that they see in their white coats, that they are not there to hurt them, they are not there to kill them, but by being there to improve their lives and also to make their life much better for tomorrow.

Do you think Congolese are open to your messages of getting treatment? Can the words of Dikembe Mutombo make a difference?

Of course. I think our role is my voice. I'm the man, I am a big star to you, around the globe and I think when I speak, people listen. When I was in Congo I was applauded by almost everyone I encountered, from the airport all the way to the city.

Did you manage to travel to the east of DR Congo to see what's going on in those provinces?

Oh, no, that is part of that region [where] I never got a chance to go [throughout] my lifetime. Hopefully, one day, I will.

It's not good right now, but let's work with their partners who are on the ground to make sure we secure their safety and also to make sure that they exercise their work on the things that we are there to accomplish. We all are praying. We always have to keep praying.

You were able to meet the American ambassador to DR Congo while you were there this month, yes? What did you and Michael Hammer discuss?

"For so many of our American friends and partners, we cannot quit and the only way we [are] going to see the light at the end of the tunnel is if we hold hands-by-hands and work on this, following this road until we get to the top of this summit."

He still believes that there is a way we can continue to improve lives in the Congo. For so many of our American friends and partners, we cannot quit and the only way we [are] going to see the light at the end of the tunnel is if we hold hands-by-hands and work on this, following this road until we get to the top of this summit. And he believed that it can happen.

In terms of the health infrastructure in DR Congo right now, what does the country most need to fully eradicate this Ebola outbreak?

It's not about setting up a bunch of hospitals that there will be a way for us to eradicate Ebola. We have to make the people understand what the source of their virus is, what the people are doing for the virus to keep coming back. That is where education comes.

Education. You know we were able to eradicate Ebola in Sierra Leone and Liberia and all [of] that part of the world because of education. We were able to eradicate Ebola in DR Congo in 74, 78, in the 90s, 94, 95, 97 ... all this time, Ebola has come back in a province in the northwest Congo, in the middle of nowhere, in the middle of the jungle. They did that because of education. It's not about setting up a bunch of hospitals that there will be a way for us to eradicate Ebola. We have to make the people understand what the source of their virus is, what the people are doing for the virus to keep coming back. That is where education comes. Like the Old Testament says — people perish because of lack of knowledge. So, knowledge is becoming a key here because so many people where the Ebola is happening — they are so remote from the major city. I think maybe we need to improve our distance [with] the radio, so if you want, you can have access to the rest of the world with communication, so they can hear messages.

Maybe it's about building a radio station and not a hospital.

No, no, we're still building a hospital. But you cannot build a hospital in almost every area of the continent of Africa. But you can build a small community center and educate people.

One last question — this is about basketball because I have to! You're one of the players who is getting a pro basketball league off the ground on the African continent. Your next stop is Senegal, I understand. What is the mega-plan? When do things launch?

"The NBA coming to Africa is a dream come true for Dikembe Mutombo."

Oh, we are just so excited for this NBA league coming to the African continent. The launch will take place in January 2020. That's when the league will officially open and its first game will be played on the continent. I'm just so happy that young Africans will have a chance to be exposed to the rest of the world, to the NBA to NCAA, where they will be discovered. Africa is a continent full of talent and the opportunity has come to Africa right now to be seen through the rest of the world. My dream was [that] I didn't want to be the last African player playing in the NBA. I dedicated to myself, thirty-plus years ago, that I would continue to go to the continent to lay the foundation of basketball, to encourage more young people to join the game and maybe get the opportunity to play the game on this level that I am playing, make a good living and go back to Africa to improve our communities. The NBA coming to Africa is a dream come true for Dikembe Mutombo.