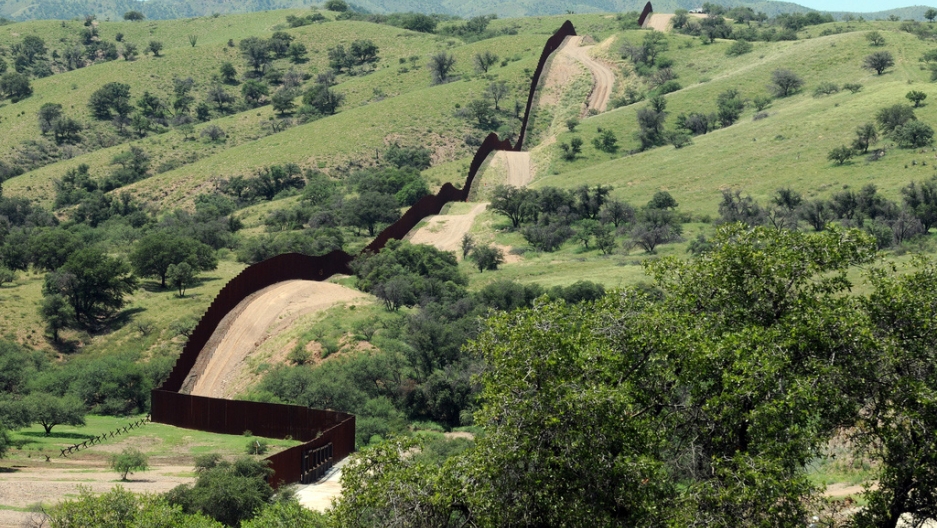 The US-Mexico border near Nogales, Arizona.

Scientists working on the US-Mexico border face unique challenges when trying to study borderlands ecosystems, from outright harassment by Border Patrol officers to tight restrictions on travel and what natural materials can cross the border. It’s all gotten worse under the Trump administration.

“In the course of talking to scientists, I found that nearly everyone I spoke to had some story about how the wall and the crackdown on immigration is affecting their ability to do their work,” says Living on Earth’s Bobby Bascomb, who is producing a series of dispatches from the border.

The first and most obvious is classic harassment and intimidation, she says.

One of the more egregious stories she heard was from Sergio Avila, a wildlife biologist with Sierra Club. Avila is originally from Mexico, but he’s been a US citizen since 2016. He told Bascomb about a particularly unnerving experience he had a few years ago in the mountains near the border.

“When they saw me, they accelerated really fast and got next to me really quick. ... They screeched to a stop, really made a big cloud of dust and said, ‘What are you doing here?’”

Avila says said he heard a truck coming down the mountain, out of sight around a bend in the road. He assumed it was Border Patrol, so he waited for it to arrive. “When they saw me, they accelerated really fast and got next to me really quick,” he says. “They screeched to a stop, really made a big cloud of dust and said, ‘What are you doing here?’”

Avila told them he was biologist, studying wildlife, but this answer did not satisfy the agents. They made Avila show his driver’s license and passport and his papers from Sierra Club. “For these guys, it's very hard to believe that there is somebody studying jaguars out there,” he explains. “That's the first step for them, to say, ‘This is not true.’ Or they always say, 'Oh, yeah, they taste good. Those are the ones that you make carne asada with.’ They have to make comments like those.”

Matters escalated from there. From inside the car, one of the agents pulled a huge semi-automatic weapon and pointed it at Avila. Avila says the agents asked him, “Aren’t you scared of people with guns like this?”

“The interactions came to a point, when law enforcement started increasing, that I just had to stop a lot of my fieldwork. It was safer for me to just not do it.”

“The interactions came to a point, when law enforcement started increasing, that I just had to stop a lot of my fieldwork,” he says. “It was safer for me to just not do it.”

Avila has also had run-ins with the Minutemen, citizens who patrol the border, with guns, looking for people crossing illegally. “Because they are not working in any official capacity, the Minutemen are in some ways even scarier for people like Sergio because there’s no accountability,” Bascomb says.

Avila feels that he is especially targeted for harassment because he is Mexican American. “Because I have dark skin color, and black hair and an accent, I get helicopters flying over me,” he says. “If I was white, none of those things would happen to me. It's basically because of racial profiling.”

Related: Trump's wall will harm wildlife along the US southern border

"I have not been harassed by Border Patrol as much as you would think because, really, they operate on racial profiling. A lot of times, I come up to the checkpoints and I just get waved through. I just look like some white guy that lives in Arizona."

Randy Serraglio, a researcher with the Center for Biological Diversity, agrees. “I have not been harassed by Border Patrol as much as you would think because, really, they operate on racial profiling,” Serraglio says. “A lot of times, I come up to the checkpoints and I just get waved through. I just look like some white guy that lives in Arizona.”

Serraglio doesn’t feel threatened by Border Patrol directly, but he does feel afraid of ordinary citizens who don’t like his line of work, Bascomb says. “My organization has received death threats many times in the past because of the work that we do,” he says. “I fear that one of these days, somebody's going to walk into our office and shoot the place up. Seems to be the newest pastime in the US.”

Researchers from the US and Mexico are also encountering difficulties collaborating on their work and attending meetings together. Scientists on both sides of the border study a mountain range called the Sky Islands, for example. The range is a large, continuous ecosystem that passes through both the United States and Mexico. Animals that migrate through the area obviously don’t know they’re crossing an international border, Bascomb points out, so it’s important that conservation efforts are working in tandem. But that is becoming more challenging.

Louise Misztal, executive director of the nonprofit Sky Island Alliance, says travel restrictions have been put in place, especially for federal employees. “In the last few years … federal agency employees, like Park Service employees, have been denied travel permission to go into Mexico for meetings,” she explains. “Our partners in Mexico have had trouble getting visas to come into the US. Usually, we're convening these bi-national meetings in one country or the other and it's been nearly impossible the last few years.”

Bascomb says she reached out to the Interior Department for an explanation but never received one. She also contacted several Park Service employees in the region, but none of them were willing to talk to about restrictions on their work.

“There are longer wait times at border crossings. ... Mexican staff [who] work with Sky Island Alliance have had challenges and been harassed and delayed coming across the border. It’s been very challenging and I think for some of my staff, it's kind of frightening.”

“There are longer wait times at border crossings,” she says. “Mexican staff [who] work with Sky Island Alliance have had challenges and been harassed and delayed coming across the border. It’s been very challenging and I think for some of my staff, it's kind of frightening.”

Bascomb had a similar experience crossing the border. She and a group of journalists and scientists were detained for an hour-and-a-half and searched. Gary Paul Nabhan, an agricultural professor identified himself as a researcher and their truck was clearly marked with "University of Arizona" on the side of it, which led to them being pulled aside for further inspections, Bascomb says. The border agents warned them that they were subject to a $1,000 fine if the agents found anything on a list of prohibited items.

A “quick exam” of the vehicle turned into a long and arduous search. “They took apart our suitcases, checked everyone’s pants pockets, went through our toiletry bags — everything,” Bascomb says. “In the end, they found a walking stick, some lemons I had picked in Tucson and forgot about, and a handful of seeds in Gary’s pocket that he also didn’t realize were there. And we were charged a $300 fine.”

Nabhan asked to look at the list of prohibited items while the group waited, but the border agents said they couldn’t give it to them because it’s constantly changing. “So, if your work involves bringing samples back and forth, what are you supposed to do?” Bascomb asks.

Nabhan says scientists and migrants entering the country are treated in the same way — with an unnecessarily high degree of suspicion and distrust. “Add in the harassment and travel restrictions and it’s getting really hard to be a scientist on the US-Mexico border,” Bascomb says.