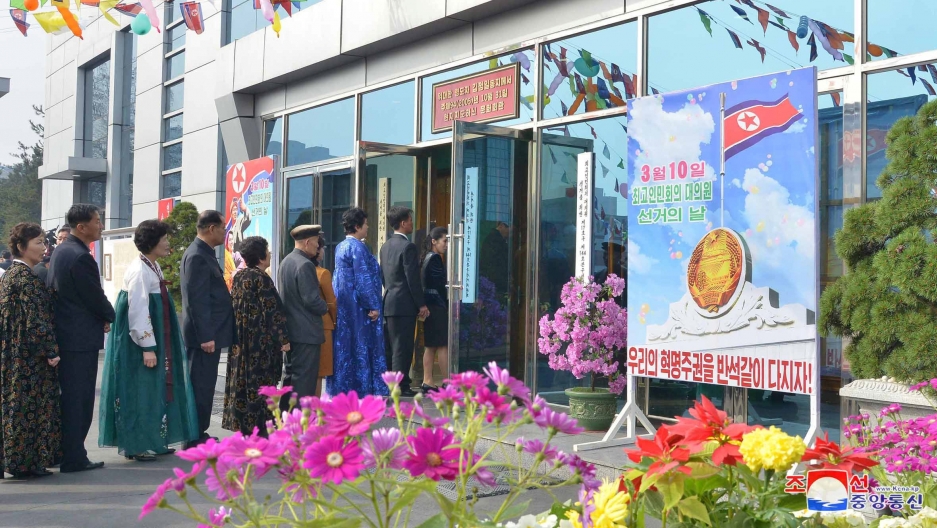 People prepare to vote during the election for the Supreme People's Assembly in this undated picture released by North Korea's Korean Central News Agency (KCNA) on March 11, 2019, in North Korea.

It’s called the Democratic People’s Republic of Korea for a reason.

North Koreans are headed to the polls this Sunday to elect candidates for provincial and city offices. Voting in the totalitarian state is not uncommon — there was another big election in March to fill out the nation’s Supreme People’s Assembly — but the North Korean system does strain the meaning of the word “vote.”

There is no battle of ideas in a North Korean election, nor any competition at all. Elections are described by state media as advancing “single-minded unity," which is more desirable than elections in “capitalist countries,” where voting is really just a “competition between a tiny handful of wealthy and powerful persons.”

Anyone raised in one of those capitalist countries may find North Korean voting baffling — and perhaps not worthy of being called an election. But these “democratic” rituals do serve an important purpose for the state.

This is what happens when a North Korean goes to vote.

Step one: Come to the polling station

This is not negotiable. Voting is mandatory for everyone 17 and older. Only those on boats “at sea” are exempted.

Upon arrival, you’re presented with a ballot, which is just a single sheet of paper with a name on it.

When Kim Jong-un came to his polling station to carry out his civic duty in March — yes, everyone votes, from radish farmers to artillerymen to the Supreme Leader — his ballot was handed over in a box lined with fancy blue fabric. But most citizens receive their ballot with far less pomp. 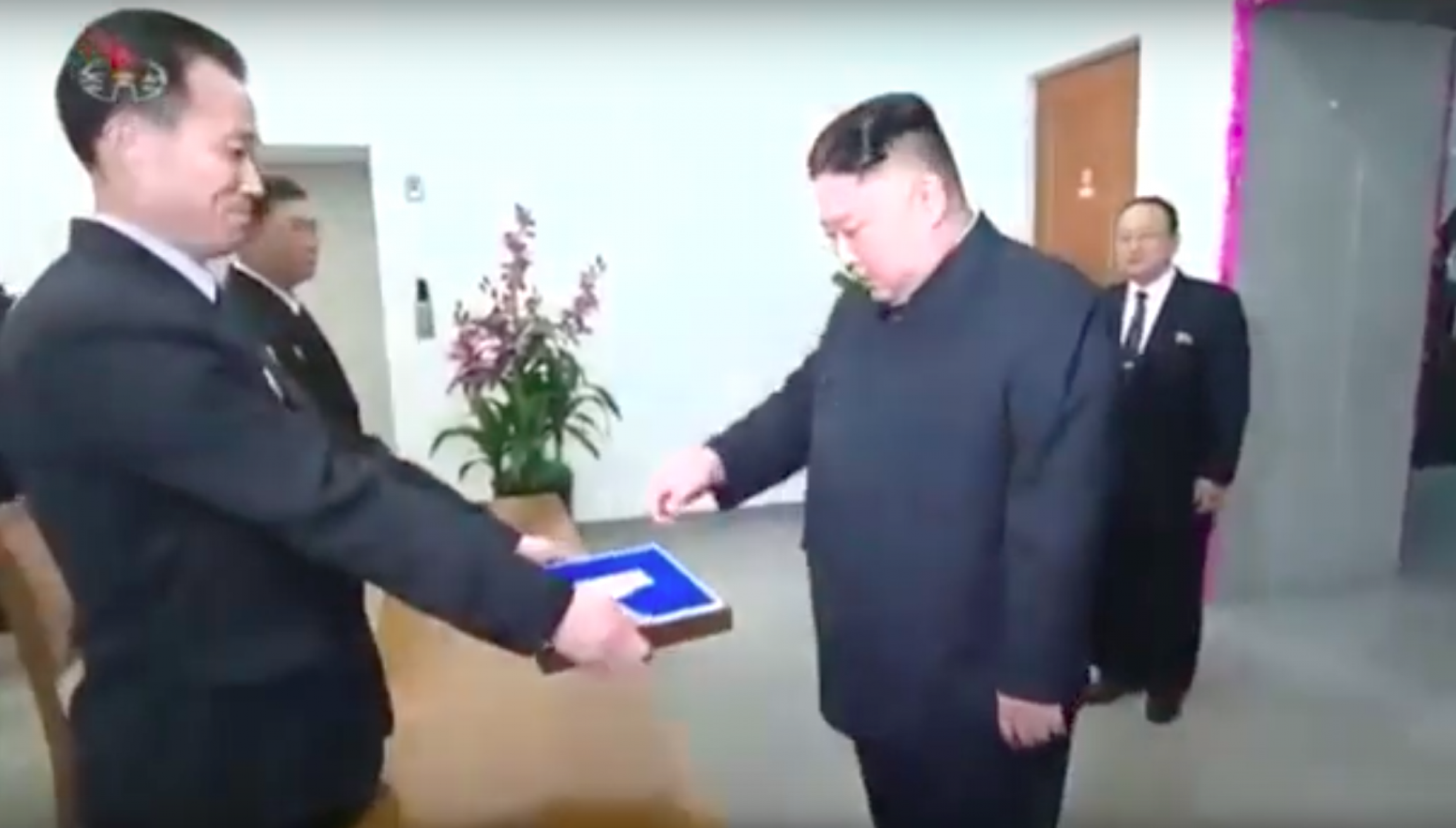 North Korea’s Kim Jong-un retrieves his ballot during a 2019 election for the Supreme People’s Assembly.

“That ballot has only one name on it,” says Glyn Ford, a British politician and author of the book “Talking to North Korea.” Ford has visited North Korea roughly 50 times as a member of the European Parliament. He is among the few outsiders who has ever seen an election play out in Pyongyang.

Voters are then guided to a large box with a slit in the top. There will be a writing utensil nearby — a pencil or ink pen — and, at this point, voters are faced with a decision.

“You can put your ballot in unsullied,” Ford says. “Or there’s a pencil there to cross out (the candidate’s name). So, it’s for or against. The theory is, if the candidate gets rejected, you have another election the following week with a different name.” 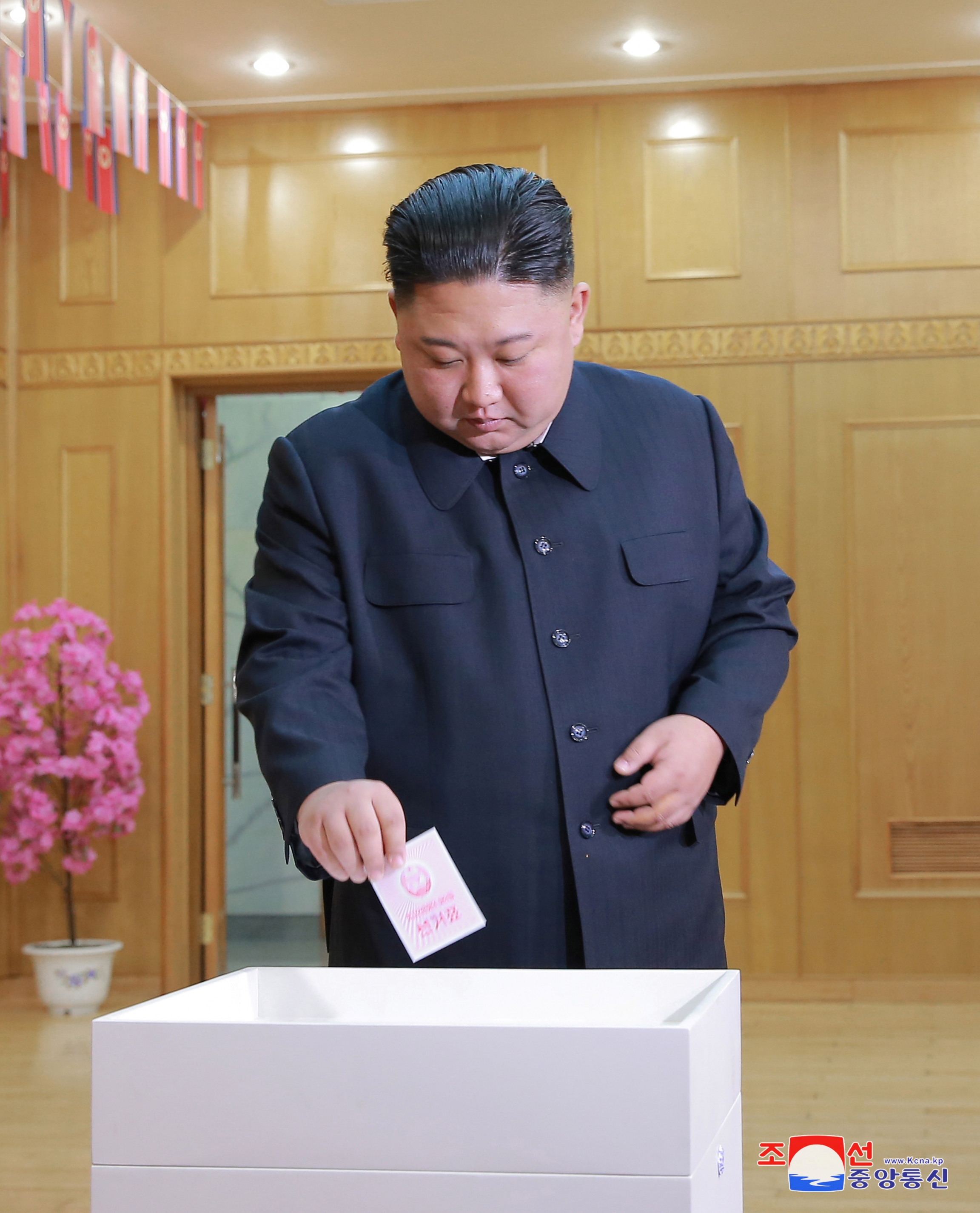 North Korean leader Kim Jong-un casts his vote in the election for the Supreme People's Assembly in North Korea.

But this is merely the illusion of a choice.

Crossing out the name of a candidate presented by the state — a domineering force that controls almost everything about your life — is unheard of. Anyone bold enough to try it likely risks severe persecution.

“I tried to ask [officials] if people ever get rejected,” Ford says. “I couldn’t get any sensible answer.” The result of any North Korean election is basically preordained: 99% turnout, 100% candidate approval.

However, the name on your ballot might not belong to the nation’s almighty ruling power, the Worker’s Party of Korea, which for decades has dictated everything from how much rice citizens eat to the color of their pants.

North Korea is actually a multi-party state — though, once again, this term as understood in most democracies becomes almost meaningless when shifted into the North Korean context.

Neither advance opposing ideas about how the state should be run and both minor parties are entirely subservient to the ruling party.

You’ve dutifully jammed a piece of paper in that giant ballot box. Your participation — in the words of the state — will “fully display, through the election, the invincibility and might of the DPRK.”

There is one way in which North Korea’s elections are superior to those held in the United States. On voting day, North Koreans get the day off.

Freed from their daily labors, they gather outside polling stations to sing, square dance and make merry — all while waving the red-starred North Korean flag.

An election in North Korea, according to state media, is a “synonym for happiness.” Ford, who witnessed North Koreans rejoicing after voting, believes he saw sincere smiles.

“It’s a day off — and you don’t get many of those,” he says. “Don’t think of it as a choice between two candidates. It’s an opportunity to have fun and celebrate the system.”

But if it’s all predetermined, what’s the point?

North Korean “elections” are best understood as patriotic ceremonies — or, as Ford puts it, “a reaffirmation of the social contract between the party and the people.”

But there’s a more practical purpose, too. Through an election, the ruling apparatus can purge has-beens or retirement-ready officials and bring in fresh faces.

As in any hierarchy, there is fierce competition for power in North Korea — but it all takes place internally. Everyday citizens have no more say in these feuds than did medieval serfs in Europe. Still, the citizens are called upon to cast ballots and twirl and sing, anointing the apparatchiks who exploit them with a whiff of democratic legitimacy.