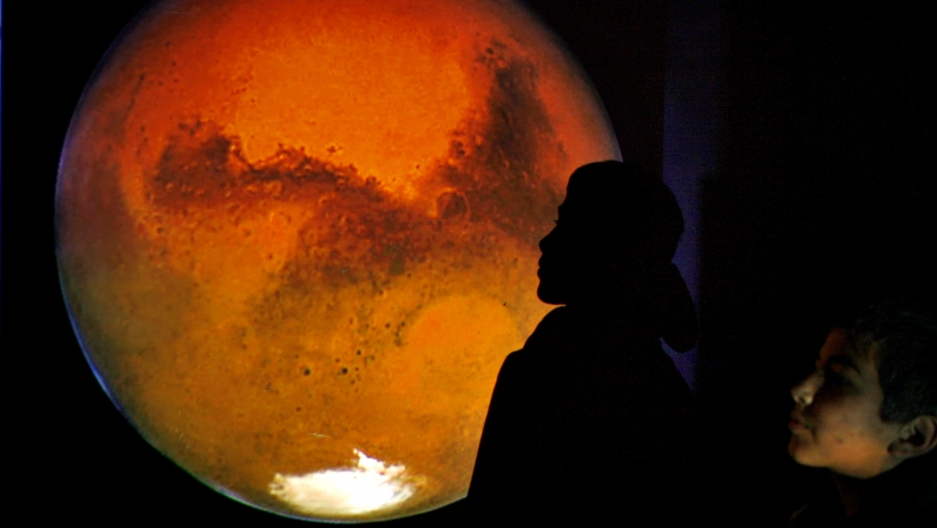 A Jordanian boy poses with an image of Mars projected on a wall during a gathering to watch the Red Planet in Amman's sky, Jan. 28, 2010.

Unlike the Apollo program that put astronauts on the moon 50 years ago, NASA is gearing up for a long-term presence on Earth's satellite that the agency says will eventually enable humans to reach Mars.

"Now, NASA is working to build a sustainable, open architecture that returns humanity to our nearest neighbor," Jim Bridenstine, the administrator of the US space agency, said in a statement to a Senate committee on Wednesday.

"We are building for the long term, going to the Moon to stay, and moving beyond to Mars."

The next manned mission to the moon will require leaps in robotic technologies and a plan for NASA to work with private companies such as Elon Musk’s SpaceX or Jeff Bezos’ Blue Origin to help cut the cost of space travel.

Using NASA’s Space Launch System, a heavy-lift rocket being built for a debut flight in late 2020, the agency is aiming to return humans to the moon by 2024 in an accelerated timeline set in March by the Trump administration.

No humans have launched from US soil since the space shuttle program ended in 2011.

NASA officials say exploration of the moon and Mars is intertwined, with the moon becoming a test bed for Mars and providing an opportunity to demonstrate new technologies that could help build self-sustaining extraterrestrial outposts.

“We are working right now, in fact, to put together a comprehensive plan on how we would conduct a Mars mission using the technologies that we will be proving at the moon,” Bridenstine told reporters on Monday, adding that a mission to the Red Planet could come as soon as 2033.

Technologies that can mine the moon’s subsurface water ice to sustain astronaut crews, but also to be broken down into hydrogen and oxygen for use as a rocket propellant, could be crucial for missions to Mars. The planet is reachable in months-long missions when at its closest orbital approach of 35.8 million miles from Earth. “It’s utilization versus curiosity,” said roboticist and research professor at Carnegie Mellon University William Whittaker, comparing the Artemis program, as the new lunar mission has been dubbed, with Apollo. Artemis is the twin sister of Apollo and goddess of the moon in Greek mythology.

The last manned mission to the moon was almost a half-century ago in 1972, when Cold War-era tensions underscored President John F. Kennedy’s push to prove technologies that landed the first humans on the lunar surface.

“That's 50 years of non-progress; I think we all ought to be a little ashamed that we can't do better than that,” said Buzz Aldrin, who joined Neil Armstrong in walking on the moon on July 20, 1969.

Bridenstine said shifting political priorities were the key reason NASA had not returned to the surface of Earth's natural satellite since then. “If it wasn't for the political risk, we would be on the moon right now,” said the NASA chief, who is working to woo Republican and Democratic lawmakers to approve additional taxpayer funds for the program.

Development of NASA’s flagship rocket, Space Launch System, whose main contractor is Boeing Co., is taking years longer than expected with cost overruns of nearly $2 billion, a federal audit released in June found. Those delays could push the rocket’s first launch to June 2021, potentially endangering NASA’s plan to reach the moon by 2024.

“Cost and schedule matter,” Bridenstine said. “So, we are working rapidly to put together a team that can assess the cost and schedule of these programs and create a realistic baseline that we can work toward.”

Charlie Duke, who piloted the lunar-landing module during the last lunar mission, Apollo 16, said leadership in the Apollo missions was "bold without being careless."

“Don’t be so risk-averse that you don’t fly," he said.

He added that the decision to put astronauts on top of a massive Saturn V rocket, the launch vehicle used by NASA for the Apollo program, "was a very gutsy call. They went through it carefully and they determined it was OK.”