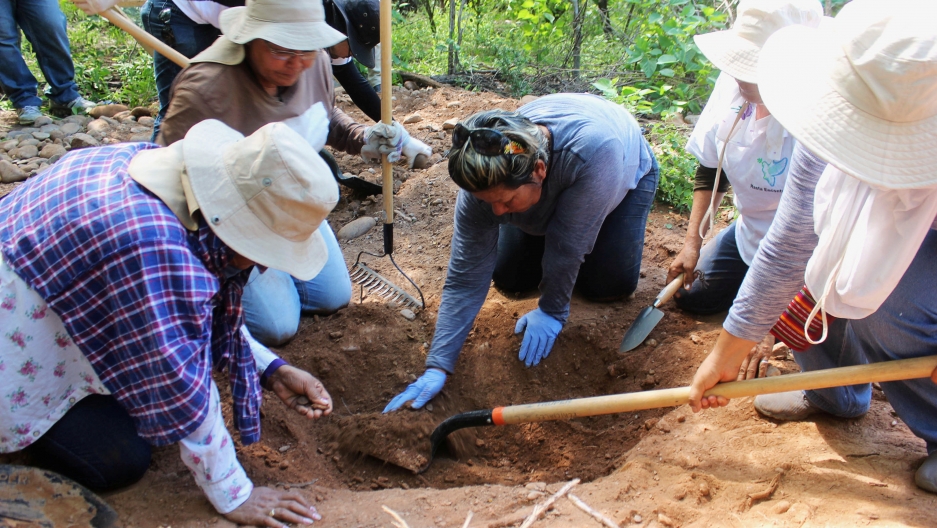 Mirna Nereida Medina Quiñones, founder of Rastreadoras de El Fuerte, a group that searches for missing persons, excavates with other members at a site where they found the skeletal remains of her son Roberto Corrales Medina, in Ocolome village, El Fuerte, Sinaloa state, Mexico, Aug. 26, 2017.

There are currently more than 37,000 missing people in Mexico, according to the Mexican government and Human Rights Watch. And there are hundreds of volunteers to search for the missing throughout the country in an attempt to bring closure to the uncertainty that plagues victims’ families.

Mirna Nereida Medina Quiñones founded the group Las Rastreadoras de El Fuerte, or The El Fuerte Trackers, in Los Mochis, Sinaloa, Mexico. She works alongside other mothers and family members that are looking for their missing loved ones. María Elena Romero from The World spoke with Medina Quiñones about her work searching for the disappeared.

The World: Why did you start this group?

Mirna Nereida Medina Quiñones: Roberto Corrales Media was a young man full of dreams, full of life, and on July 14, 2014, he happened to be in the wrong place at the wrong time. A black pickup truck showed up and took him away. Since that moment, our life changed. I went to the authorities to ask how and where they would look for him. And I got no response. I left the police station, and I made a promise to Roberto that I would search until I found him. We’ve been working for two years since we found Roberto, and from that we have found some 100 more people.

We search on Wednesdays and Sundays. On Mondays, we explore the areas where we’ll search. So, on Monday, we decide where we’re going on Wednesday. The women arrive, each with her breakfast. We have coffee, eat breakfast and then around 8 a.m., 8:30 a.m., we load our tools into the cars. We already know where we’re going; we make a list and we pray before leaving.

This prayer before you leave, what do you say?

We ask God and, as we have an office with photographs of all the people we’re looking for as well as those we’ve already found, we ask those who we’ve already found to illuminate us because those are the beliefs in Mexico — that people who are no longer here can help you find bodies. We ask them to help us, to guide our paths to find them. And we ask those we’re looking for to call to us, to tell us where to go to find them. That’s why some people call us crazy. They say we’re crazy because we talk to dead people. So, then we get in the cars and head to the site. When we get to the site … everyone grabs their tools and gets to searching, to sweep the area. Sometimes we find something, sometimes we don’t, but the therapy, the sensation of well-being that a search gives you — whether you find treasure or not — is something that comforts and keeps you strong to continue ahead. When we don’t find anything, well, we come home a bit discouraged, but in the end, we realize that it’s also a successful day because it’s a day we were able to go out and search. It’s a place we look for, a place marked by searches.

The day changes when we find a body. Then it changes a lot, because there are conflicting emotions. You find someone, and it makes you happy, it makes you sad, it fills you with courage, it fills you with impotence. But in the end, the prevailing feeling is one of happiness because you’re going to bring peace to a family, and we work quickly to find the identity of the person we found in the grave. That’s how it normally is. We’ve been able to identify around 80% through the characteristics we have in our search database: cloths, traits and all that help us to almost identify the person that we’re removing from the grave.

Is what you’re doing dangerous? What do you do for protection?

Yes, there is an underlying danger, but in the end, we’ve always said that we’re not looking for guilty parties. We just want to find our treasure and that has helped to open doors for us. So, the prosecutor’s office accompanies us in what is basically removing a body. When we think it’s important or necessary for them to come, we call. In the beginning, they always came with us, but not for the last three or four years.

Searching for bodies is tough work, right? How do you deal with the emotional part of this, perhaps because you call what you’re looking for “treasure”?

Here in Mexico, people search for gold treasures. For us, treasure can be a finger, a fingernail.

We call it that because most of what we’ve found has been buried in the earth. Here in Mexico, people search for gold treasures. For us, treasure can be a finger, a fingernail. A day that you don’t go out to search feels like a lost day, or that you’re failing. It generates a feeling of guilt because you didn’t go searching.

What did you feel the day you found your son?

A big group of us found Roberto exactly three years after he disappeared. When I saw the grave, I knew it was his. I cried, I laughed, I did a lot of things because I didn’t know if I should laugh or cry from the pain. I also felt good because I already knew. Deep down nearly all of us know they are dead, but as I said, we have the hope that they’re still out there. Knowing that he was dead, that he was there, it broke my soul and my hope of finding him alive.

Explain to someone who doesn’t know about life in Mexico how a person might disappear.

There are power struggles here. Organized crime and opposition groups fight for power, and they recruit young people to sell drugs, to work for them. Most of the youth are between 15 and 20 years old. For us, it’s very sad to look for a grave and walk around with a shovel and machete on our shoulders and see that the authorities are tremendously indifferent to this. This is why we search.

The head of the Sinaloa Cartel, El Chapo, was captured and sentenced here in the US. Does this feel like some kind of justice for you?

No, of course not. One would hope that with El Chapo’s detention that disappearances would stop, that the drug war would stop. El Chapo has a boss who, the truth is, I don’t even dare to say who it is. El Chapo is a front. Such a front that they continue working in the same manner throughout the country. So, for us, there is no satisfaction in the fact that El Chapo has been judged, gone to trial. He’s just another mortal. It’s a big front for us. … In the end, the main boss remains and installs others, other Chapitos, to work here. This, unfortunately, is what’s happening. We have to remain grounded and see that the governments themselves are the ones to stop this. Because if the government allowed El Chapo to work like this, it can also stop those who continue working in El Chapo’s name. If they don’t, well, this is going to continue and that terrifies us as families.

I’m going to sound a bit deflated, but I don’t see that anything’s changed. On the contrary, I see that disappearances continue. What’s going on is that now they’re being brought to light because we head to search. With a shovel and a machete, we’ve brought this to light, to the government’s attention that there is so much death.

A while ago, you made some demands to the Mexican government. What were they?

Our first demand was that they help us find our missing loved ones. We got an answer from the National Search Commission. On May 24, we had our first meeting with the National Search Commission’s president. The president said they would spare no expense for the searches, and we achieved our first goal, which was to work with the bodies that have already been located. We were able to get three forensic cemeteries here in Sinaloa, a forensic institute on the northern region that includes Sinaloa, Sonora, Baja California. So, with this response, we see that they’re making a concerted effort. It’s a new government. We hope that we achieve good results with this new government.

What is the message of hope that, in spite of the issues that face Sinaloa and other parts of Mexico, you have hope for a better future?

We, as mothers and family members of the disappeared, we ask people who have a missing family member not to give up, to trust and have faith that we’ll eventually find everyone who is disappeared. That’s the promise that we searchers have made: to search for and find everyone who is missing. So, the message for families is that they’re not alone. We’re here, the Rastreadoras de El Fuerte and searchers from around the country, to seek and find our disappeared treasures.

This interview was lightly edited for brevity and clarity.