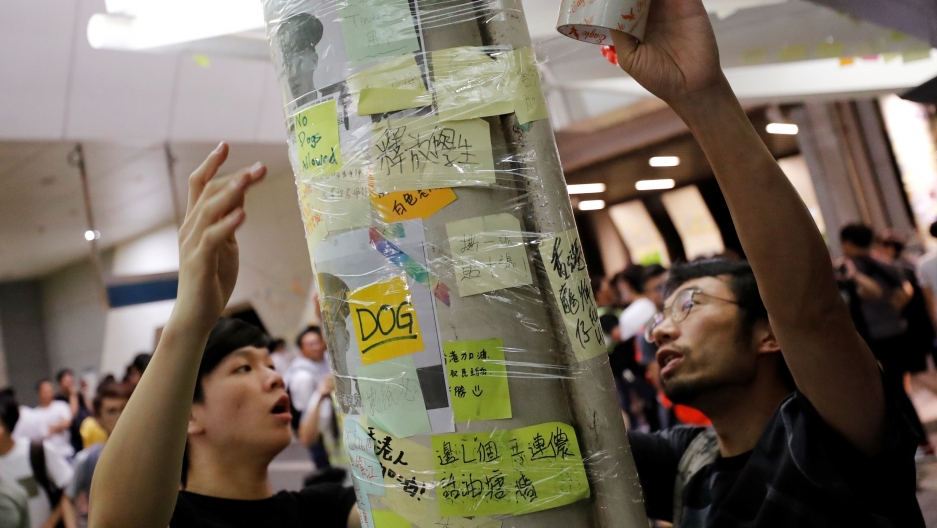 Anti-extradition bill protesters wrap plastic tape to protect the memos on "Lennon Walls" at Yau Tong in Hong Kong, China, on July 11, 2019. Images of the Lennon Walls are also being shared on social media.

Hundreds of thousands of people have packed Hong Kong streets in the last few weeks in sometimes violent protests that have marked the biggest demonstrations and turmoil since the city was handed over to China in 1997.

In the streets, clashes have sometimes become violent. But the movement exists online, too.

Jason Li, a cartoonist and designer from Hong Kong, has been cataloging memes as they’ve been appearing.

“I even found a thread in a forum in Hong Kong that was saying, ‘Hey, we should use means to attract foreign media. You know we want more international eyes on this issue,’” he says. “And so they remixed certain American memes. There's one that's like Disaster Girl — this little kid looking at this burning house and smiling in a way and using that to portray like our government not listening to the people.”

The memes have evolved with the protests, he says. He gives the example of Carrie Lam, chief executive of Hong Kong, whose portrayal in the memes has shifted.

“I think there's been, like, a couple of different portrayals,” Li says. “I think first, she was portrayed as a cruel person. For example, in a disaster girl meme with a little girl smiling at the burning house, the little girl was supposed to be Carrie Lam and the burning house is supposed to be the future of Hong Kong. And so at first, she was this Machiavellian, cruel, government official person. That evolved a little bit because Carrie Lam also gave a lot of press conferences and tried to sort of placate the masses by giving short speeches. And in one of them, she called ‘protesters are children that she needs to rein in,’ which obviously from the protesters' point of view and meme-makers’ point of view was just great ammunition for creating memes, so that there's other memes where she's portrayed as, like, a mother wielding guns.”

“The beginning, I think, was more awareness-raising and the cruelty of the government,” he says. “And that morphed into — after the protests, on particularly on June 12, became violent and the police are caught on camera attacking protesters and even journalists — so there were a lot of police violence memes. The latest wave I've caught, I think there's been recently a lot of self-care memes, so let's take care of each other in low moments.”

Li translated and interpreted a handful of different memes from Hong Kong for The World.

The government as Thanos 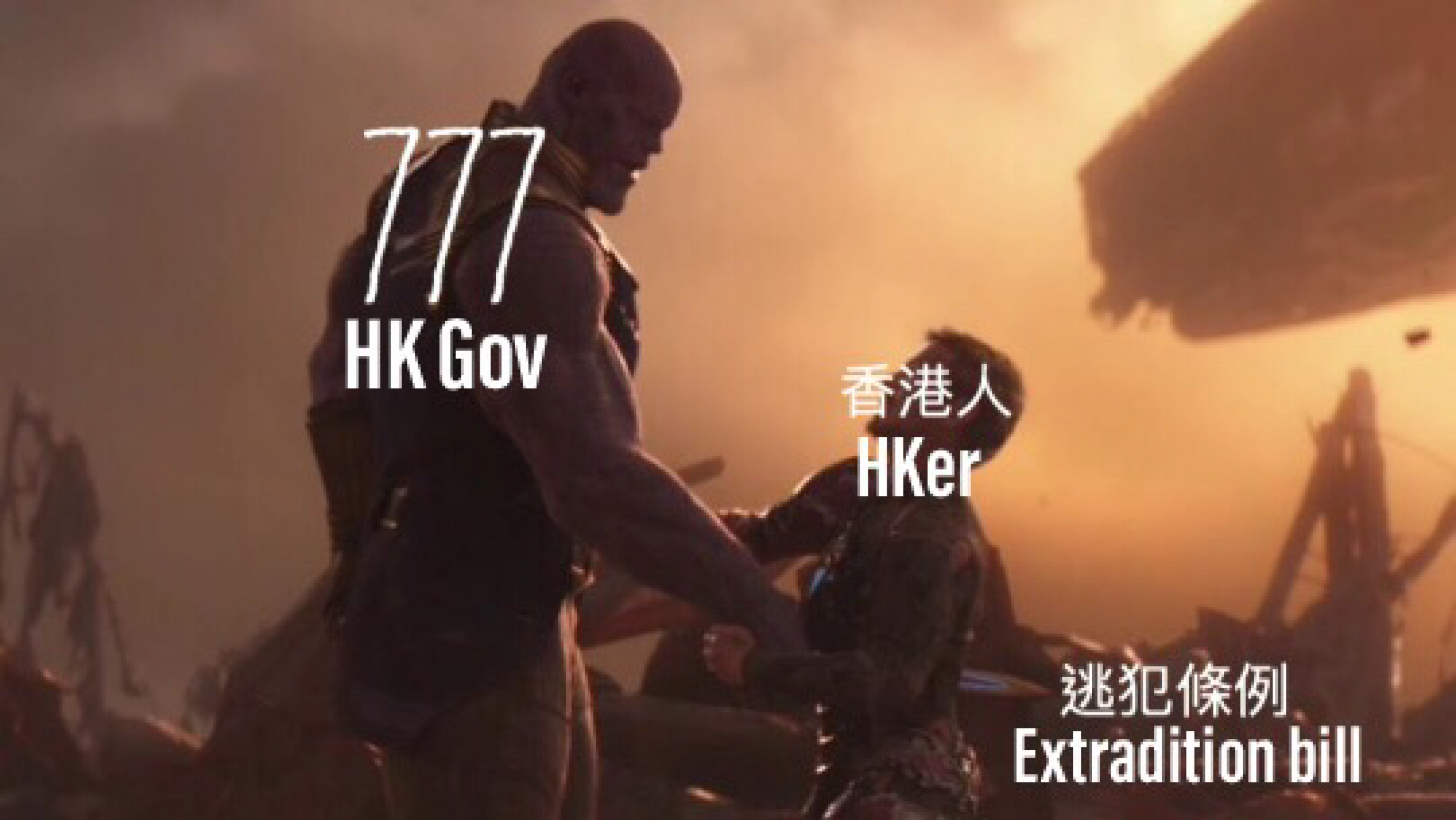 In a frame from “Avengers: Infinity War,” Thanos is a stand-in for the Hong Kong government, Tony Stark is a Hongkonger and the knife is the extradition bill. This meme is a good example of the first waves of memes, Li says. 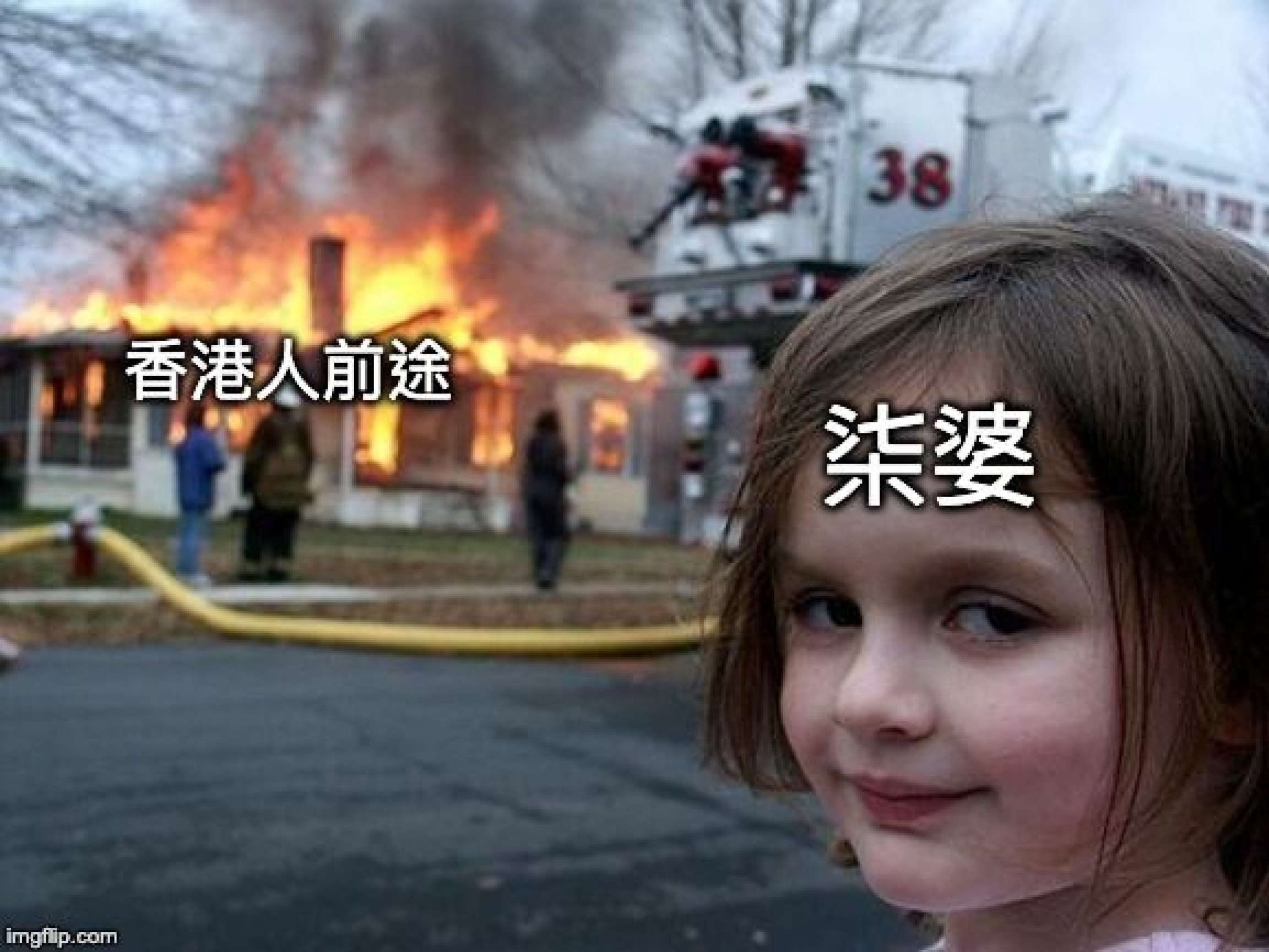 This meme is called “disaster girl.” The text at left over the burning house reads: “The future of the Hong Kong people.” The text on the girl, who is meant to be Carrie Lam, reads “Bitch.”

Bruce Lee’s 'Be water, my friend'

In a famous Bruce Lee quote, the actor and director describes water as formless. “Be formless, shapeless like water … water can flow or it can crash.” Protesters have used that thinking to disperse when they need to and then return shortly afterward.

Raincoat man as a symbol of solidarity

Everything is ok. Goodbye, my friend. Stay strong, Hong Kongers. This is our Last Shout. Please print then and bring them with white flowers to the venue in Admiralty. For the two victims For the sake of Hong Kong

This meme reads: “Friends don’t leave, Hong Kong people don’t give up.” A man wearing a yellow raincoat fell to his death on June 15 after unfurling a banner protesting the extradition laws. His image is now in many memes about tribute and sacrifice.

The animation above lists the five demands of the protesters: full withdrawal of the extradition bill; retraction of the “riot” characterization of the protests; release of all arrested protesters; investigation of and accountability for police brutality; and Carrie Lam’s resignation.

The Hong Kong flag is typically a white bauhinia flower on a red background. Here, protestors hoist a black version of the flag, the flower depicted wilted or covered in red bloodstains. Images of the flag are now being used for avatars on social media profiles.

The main text on the image above says “Lennon Walls blossoming, defending freedom in my city, add oil Hong Kong!” Hong Kong’s Lennon Walls first appeared during the 2014 Umbrella Movement, modeled after the Lennon Wall in Prague. Now, there are dozens of them all over Hong Kong, covered in messages about the extradition bill.

#HongKong netizens mocking #hongkongpolice with memes, after around 100 cops holding shields were sent to clear memos with officers' information off the walls of a tunnel in Tai Po. "Lion" in Cantonese sounds like "tearing off paper", hence Lion King #antiELAB pic.twitter.com/TmlVpq08hQ

In Cantonese, the word for “lion” sounds like “shredding paper,” which is what happens when police tear down Lennon Walls. The word “lion” in English sounds like the Cantonese word for “arrest.” The headline of the poster above reads “Shredding King” and the subtitle says “The King of Arrests.”

Li has collected dozens of memes. He says the memes offer a more nuanced look at the protesters than comes through regular news reports.

“I think memes also really just show the inner state or inner lives or inner emotions of the protesters in a way that we wouldn't normally get from a journalist or from just normal reports,” he says. “The two extremes of sadness and anger are pretty well displayed in these memes.”