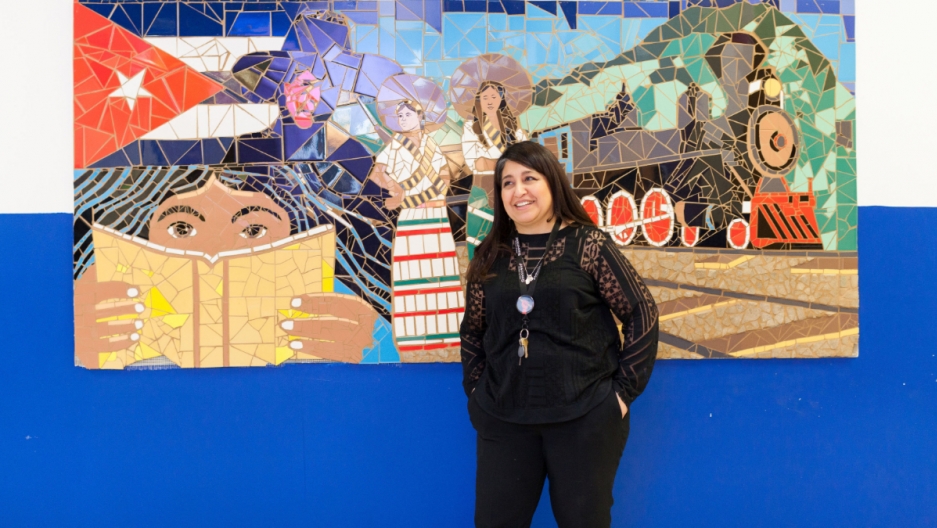 El Colegio High School Executive Director, Norma Garcés poses for a photo inside her school. She says that the fear of deportation and family separation is a reality for many students here.

Trump said on July 5 that the mass roundups would begin "fairly soon," after postponing the operation last month when the date was leaked.

The threatened raids have rattled immigrant communities including that of Minneapolis, Minnesota. Some students of El Colegio High School in south Minneapolis are dealing with the fear of deportation and family separation. Their public charter school serves as a community center and it bustles with events, meetings, dance classes and driver’s ed sessions.

Almost all of the students here are Latino or of indigenous descent, and many have parents, grandparents, aunts or uncles who are undocumented.

Norma Garces, the school's executive director, says her students are scared. She spoke to Marco Werman about how her students are preparing to deal with the possible roundups and the aftermath.

"This a lot of fear in the community and concern [about] the unknown and creating a lot of unnecessary trauma," Garces said. "So we have meetings where we prepare the families [for] what could happen. We bring lawyers so they don't get [defrauded] but [instead] they hear it from the right sources about how to be prepared, what is that they need, real tangible things that are going to help them to be prepared for anything."

Marco Werman: In the past when these headlines have popped up, possible raids, what kind of advice do you give your students? Do you give to staff?

We have a form, like a checklist. They put in all their documents ready in a box, so that the kids know where the passports are. This is where your birth certificates are, this is your vaccinations, this is your bank account, this is who's responsible for the bank accounts. I'm in a high school, so a lot of the kids may be responsible for their siblings if their parents would be picked up.

So if the parents were picked up, then the kids have the materials they need, but boy, that's really tough because they're still kids, right? And suddenly they're thrust into adulthood. How do you get them ready for that?

They have to talk about it. When you are in a trauma-informed environment, you know that [being] alone creates more trauma, but in community, we can heal anything. So, we talk about it. I have family members that are not documented and I talk about it with my students. And everybody knows somebody who doesn't have documents, who is a very important part in our community and is a vital person for somebody. So we have to talk about it. And then, it becomes more healing than the trauma itself.

Have you ever been concerned that there might be a possibility that the El Colegio School itself would be raided?

ICE will park a couple blocks from here and the kids will know because they will get off the bus and they will walk to school petrified because they saw ICE when they were getting off the bus. When we talk to the politicians, they said that they were looking for someone there, so that's why they stopped right there. But the schools that were nearby will call each other and we'll let each other know where ICE was. But what we had to do with the students was that if ICE was nearby, we would blow a whistle in the in the playground and the kids will come in, no questions asked. It happened twice ... we had to do that.

Is it still a concern?

It feels safer because we know we have a lot of community backing us up. But [what] we don't know is if they will show up. They can come into a school and arrest the student because [he is] over 18.

That's got to be really tough for the kids to see ICE patrol cars on their way to school. When you brought those immigration attorneys to the school to talk to students about their rights, how did that go? What kind of questions did the students ask?

And what about your staff? They're the ones who have to comfort the kids. How are they feeling and what do you tell them?

Well, we have to be there for the kids, right? And they're not creating more trauma. If they were working in a bigger school where they won't talk about it, when they know the kids are in fear maybe just one teacher [will speak to students], but they cannot talk to their principal about it. Or the principal would be like, "That's not our business and we should not be asking the kids about these things. Don't create more, you know, gossip." In the big schools, they will be diminished. Probably, the ESL teacher [will] be talking to these kids only, or their English [teacher], or their Latino teacher [will be] talking to the kids. In here, we're all helping each other, my staff knows what to say they come to us, everybody knows the lawyers are part of the community. Their lawyer is here twice a week. We are in a community that we're safe, we have created that more intentionally in the last two years.

These raid announcements — the White House announced one a few weeks ago and then President Trump met some resistance and said they'd be postponed. Do the on-again-off-again announcements impact students at your school?

Of course, you can see the anxiety on the kids, you can see everybody on their phone texting their parents "I'm OK, but ICE is in the corner.” All we needed was one person to put "ICE is two blocks from El Colegio," so if I'm a parent of El Colegio, I'm going to be worried.

Do you have a particular story about a student who is worried about all this, maybe even worried about deportation or being separated from their family?

Even from myself, I mean, I only have a green card and my son who's a US citizen worries about it, and gets anxiety about it, "Mom would they take you? And because of the job that you do, would they come in?" I will be the one dealing with ICE outside, so would I be arrested because I'm resistant to take one of my students? So he worries about that.

What do you tell him?

That I'll be OK. That we have a lot of community that will back us up and that will not let me [be taken] away. But if they take me away, in 24 hours I'll be in Mexico, probably, and he'll join me.

In your heart of hearts, do you believe that you will be OK?

In my heart of hearts, I think, it might be a bigger deal because I'm a principal and I'm putting everything on the line.