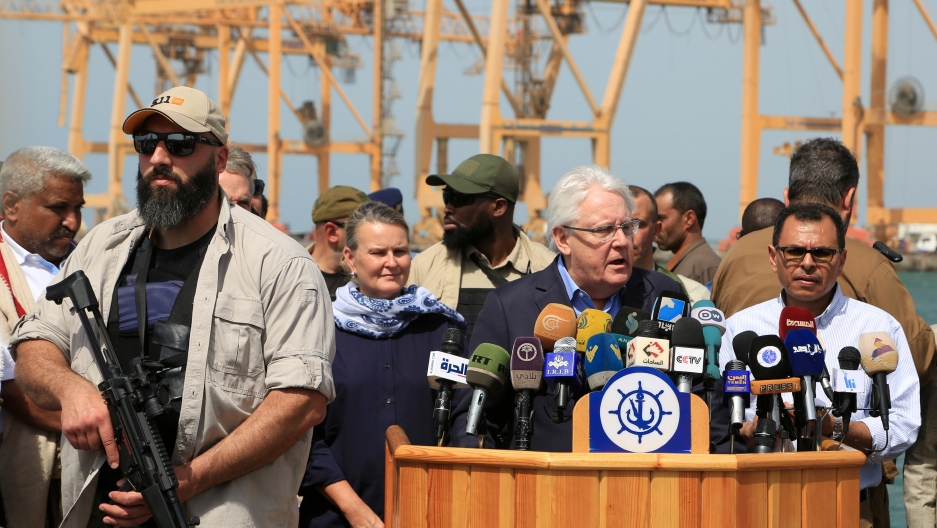 UN envoy to Yemen Martin Griffiths speaks to the media during a visit to the Red Sea port of Hodeidah, Yemen, Nov. 23, 2018.

One diplomat has been entrusted with the task of bringing warring sides in Yemen together. United Nations Special Envoy to Yemen Martin Griffiths has made progress where others have not.

In December, people in Yemen — and the world's diplomatic community — were surprised that a diplomatic meeting in Stockholm arranged by Griffiths led to action steps, including a drawback from a likely battle over the Red Sea port Hodeidah.

"The fact that this is still happening six months or more after the signatures of that agreement in Sweden is remarkable," Griffiths says. "In fact, the parties are still prepared to go after it, despite the frustrations that we all feel."

After briefing US Secretary of State Mike Pompeo on Wednesday, Griffiths spoke with The World's Marco Werman.

Marco Werman: Martin Griffiths what was the key message you delivered to Secretary of State Pompeo about Yemen?

Martin Griffiths: My main message was and, indeed, is that we need to keep Yemen out of a potential regional conflict. Yemen has its own problems, its own war, as you've said, and it's my first priority at the moment — I think it's true for all of us — to at least keep it out from being sucked into any potential regional conflict. And that was my main discussion with Secretary Pompeo. We also discussed other aspects of the things we need to do in Yemen.

Isn't it too late for that? I mean, it's right in the center of basically a proxy war between Iran and Saudi Arabia.

I don't think it is too late. First of all ... there isn't a shooting war yet in the region, thank God for that. But also I think that there are many voices in Yemen, including in the Houthi movement, who see their future in Yemen and not in any war between Iran and others. I think we need to focus quickly, seriously, urgently on de-escalation in Yemen and, in particular, of course, the attacks across the southern border into Saudi Arabia.

That's right. I think what was behind your question is that if that comes, that Yemen may be drawn into it and that's not good for Yemen. That's actually not good for the region either. It's my priority to try to keep Yemen away from that and to focus Yemen on its own problems, rather than those in the region. That was the discussion I was having with Secretary Pompeo.

So, when you took on this job, Martin Griffiths, the two main sides in the civil war were not willing to meet each other — the government of President Abdrabbuh Mansur Hadi and the leaders of the Houthis. But you changed that in Sweden last year; they did meet. So, what's the progress that's been made since then?

It's been slow. It's been grindingly slow since that time. But next Sunday, Monday, for example, the two sides will meet under the auspices of [Lt.] Gen. Michael Lollesgaard, my colleague who runs the Hodeidah mission, to, I hope, to come to specific agreements on the demilitarization of those ports and improving humanitarian access in Hodeidah. The fact that this is still happening six months or more after the signatures of that agreement in Sweden is remarkable, in fact, that the parties are still prepared to go after it, despite the frustrations that we all feel.

Is there a timetable to end the war?

As you keep telling anyone who will listen, the Yemeni people are the ones who really suffer from this war. What will their country look like the day after this war ends, whenever that is?

Relieved, I guess, because of the terrible, terrible effects of the war and of many different wars, as you know, that are going on in different parts of Yemen. Relief that there is a chance for the markets to operate, the economy to return, that the divisions that now exist in Yemen will be over, but, as I think you're implying, it's just a first day and the prospect of actually mending the wounds of the war is a generational one. And I think so in most wars, but particularly in Yemen. The prospects of local reconciliation communities living together when they've been fighting each other, the prospects of reconstruction are gonna be phenomenal. The story starts the day after we succeed in getting the war stopped. That's when the hard work begins.