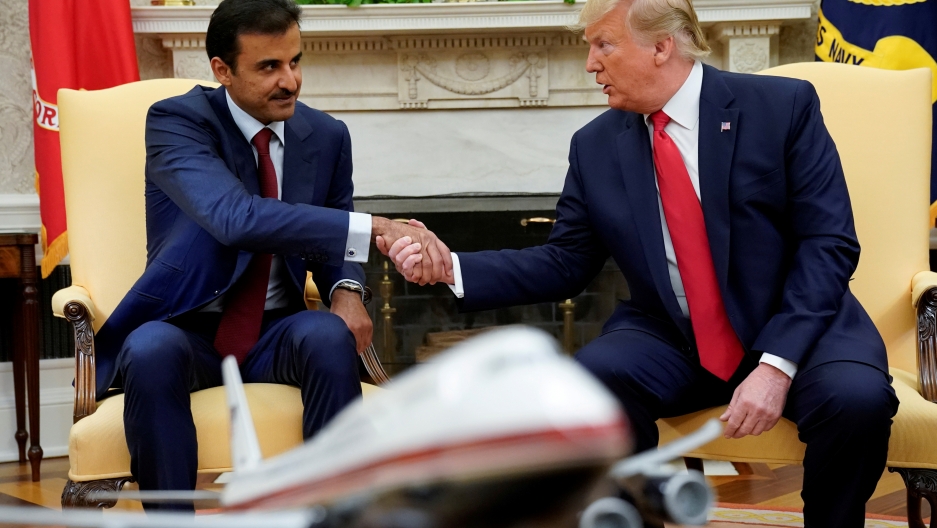 President Donald Trump had good reason to welcome Tamim bin Hamad al-Thani, the emir of Qatar, to the White House.

Qatar is an important business partner and a large customer of US weapons. At a Washington, DC, dinner hosted Monday night by Secretary of the Treasury Steve Mnuchin, the emir joked to guests, including the president, "You should all be happy — especially you, Mr. President — to hear that there is a trade deficit between our countries that favors the United States of America."

There are other reasons, of course. Qatar is hosting direct peace talks between the Afghan Taliban and US officials, negotiating terms that could conclude the war that the president came to office promising to end.

Another is Qatar's strategic location — on a peninsula that juts out into the Gulf that separates Saudi Arabia from Iran. The country is also home to America's largest air base in the Middle East, with 11,000 US troops.

One big problem, though: America's other friends in the Gulf — Saudi Arabia and the UAE — see Qatar as an outlaw, even an enemy. And as the Trump administration builds up its military presence in the region to counter Iran, this regional spat among neighbors complicates things for the president.

"Doha has been bending over backward to try to improve relationships with Washington, and this visit is part and parcel of that trend," said Elizabeth Dickinson, a senior analyst for the Arabian Peninsula at the International Crisis Group.

Dickinson spoke with The World's Marco Werman about Qatar, its feud with its Arab neighbors, and the impact on American policy in the Persian Gulf region.

Marco Werman: Why did the emir of Qatar come to Washington?

Elizabeth Dickinson: Well, I think it's part of an accelerating relationship that we've seen between Qatar and the United States, particularly since Qatar's neighbors broke off relations in 2017. So one of the unintended consequences of that blockade is that it really forced Qatar to double down on its relationship with the US. So, essentially Doha has been bending over backward to try to improve relationships with Washington, and this visit is part and parcel of that trend.

Last year, when the Saudi crown prince was in Washington, the talk was all about trade. Same thing with the emir of Qatar. Are Gulf leaders cozying up to President Trump by reminding him about their money?

Well, I think Qatar has made a very concerted effort to remind the president how important the relationship is to the US, so some of the headlines from this visit, for example, are Qatar's building of a surveillance plane in South Carolina — that's creating a number of jobs. Qatar Airlines purchasing US-made aircraft creating hundreds of thousands of jobs. So these sorts of headlines about the US economy, I think, play quite well with the administration and the Gulf states have certainly picked up on that and are using it to their advantage.

The Saudis or the Emiratis are not terribly fond of Qatar. Why do they dislike Qatar?

Yeah. So I think this dispute really — we can take it back to the Arab Spring and the very different reactions that the Qataris and the Saudis and the Emiratis had to the uprisings. I think Qatar, particularly through its media network Al Jazeera, was very supportive of the uprisings and particularly the Muslim Brotherhood currents of some of the political forces that emerged after those uprisings. They were very encouraging of that and really played it up in the media. By contrast, Saudi Arabia and the UAE, I think, really saw it as a threat to the region's stability and really a concern for their own stability as well. They saw this tide of Islamist influence sweeping across the region, very much backed by Qatar and Turkey, and moving against their interests. So that's where this initial rift took place, and it really continued to accelerate in the years after the Arab Spring as they found themselves on opposite sides of the conflicts that emerged in Libya, in Syria, in Egypt, across the board. They just have very different visions of what region they'd like to see and that basically blew up in 2017, when they ended up breaking ties with Qatar.

So, that was a little over two years ago. Qatar was actually punished by the Saudis with a blockade. What happened there and are the feelings still sore today?

I would say, if anything, the feelings have gotten more entrenched. I think the Qataris have found that the boycott, blockade, however you want to call it, has really played to their advantage in many ways. They've been able to, first of all, consolidate domestically in terms of the emir's role in the public space. He's seen as a figure who's pulled Qatar back in a crisis situation. Everyone rallied around him. In many ways, the crises gave him 50 years of legitimacy for free. So it was really a win for Qatar domestically. I think on the Saudi/UAE side, they continue to see all of the things that caused alarm for them two years ago have, if anything, only accelerated since then. We have Qatar on the one side and then UAE/Saudi Arabia really at odds and throughout the region and the way that they want to see ongoing conflicts play out. And this has taken the Gulf crisis and expanded it from being a Gulf problem to being a regional problem in the Middle East, but also the Horn of Africa. Even in places as far away as Afghanistan the Gulf conflict now infects these other crises and adds layers that complicate unwinding them.

And why is this a problem for the United States?

Well, this is the problem for the United States because it's really just sort of a headache. They would like to see the Gulf countries work together on their priority, which is countering Iran's influence in the region. And I guess the US sees it is really a distraction to have the Gulf countries at odds with one another. Unfortunately, I think that the US really misplayed their hand on this crisis — at the very beginning, they downplayed it. They thought it was a simple spat between wealthy rulers. They brushed it aside as nothing more than this petty personality problem. And because they didn't take it seriously, I think the Gulf didn't take Washington seriously as a mediator. As a result, I think the US really has very little leverage to resolve this conflict. So, it's stuck with it and stuck trying to find workarounds for all of these inconveniences that have arisen since the rift took place.

So, if the Saudis still have friction with Qatar, does that make Qatar an ally of Iran and what does that mean for US policy?

Well, I think something that has happened after the blockade is immediately afterward, Qatar had to rewrite the book about how it got its goods. So, this is a small island, it's a desert country. Something like 80 or 90% of all of its food and commercial goods are imported. So, most of those goods used to come through the other Gulf countries and when they blockaded Qatar they had to come up with another way to get all these products on their shelves. And one of the ways that they found was Iran. So Iran has supplied produce to the country. The other very clear commercial relationship that's developed is through Qatar Airways. One of the things that the Saudis and the UAE and Bahrain did is they blockaded the airspace, which means that every Qatar Airways flight going in and out of Doha has to fly over Iran. Well, I think by default, Qatar has been forced to create a deeper relationship with Iran than they had before. In terms of their political positioning, I see that they're being very cautious about Iran and the role that it plays in the region. However, the way that they deal with that threat is different than the way that the Saudis and the Emiratis do. The Qataris have to engage. They have basically no other choice.

There's another consideration, a big one. The US has a huge air force base in Qatar. Is that a liability for the US as it tries to stay friendly with Saudi Arabia and the UAE?

I think there were efforts at the very beginning of the crisis to convince Washington to move that base which was very unsuccessful. It's certainly sort of a sunk cost, if you will. [It would be] a huge expense just to transfer that. I think it just entrenches the reality that the US is going to have to talk to all sides. And I think that's something that the Gulf states understand and respect. But one interesting thing that's happened since this rift started in 2017. The US has sort of quarantined its own priorities from being affected by this rift, and they've quarantined two things: The first one is military cooperation, and the second one is counterterror finance. So, the condition that they've told the Gulf states is ... fine, you can have your rift and your boycott and whatever, but, you know, [with] joint military exercises, everybody has to show up; counterterror finance, everybody has to be at the table. And I think the Gulf states have gone along with that because of course their relationships with the US are ultimately quite important.