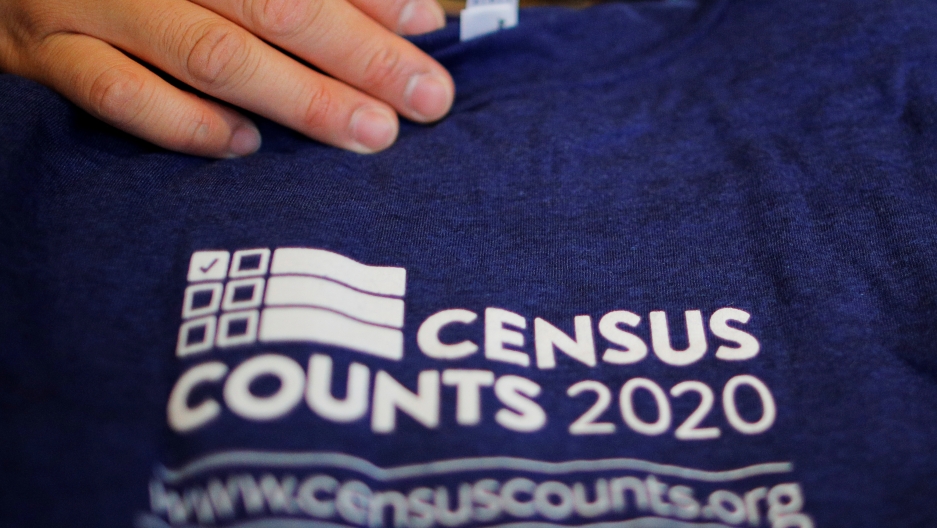 T-shirts displayed for a community activist event for the 2020 census.

President Donald Trump said last week that he was moving ahead with adding a contentious citizenship question to the 2020 US census in a dramatic reversal after his own administration, including Commerce Secretary Wilbur Ross, announced a day earlier that the plan had been dropped.

A senior Justice Department lawyer told a Maryland-based federal judge overseeing litigation in the matter that the administration was seeking a “path forward” to add a citizenship question after the Supreme Court blocked it.

Critics have called the citizenship question a Republican ploy to scare immigrants into not taking part in the census and thus engineer population undercounts in Democratic-leaning areas with high immigrant and Latino populations. That would benefit non-Hispanic whites and help Trump’s fellow Republicans gain seats in the House of Representatives and state legislatures when new electoral district boundaries are drawn after the census, the critics said.

Greisa Martínez heads the immigration rights group United We Dream. She herself came into the US from Mexico without documentation when she was eight years old. She spoke with Marco Werman about her concerns with the citizenship question and shared how she will respond to it.

Greisa Martínez: I think that it's important who it is that knocks on my door. That's why we're going from community to community, particularly with Latinos and immigrants all across the country, to be able to explain how to best fill out the census. It's not just the form. It is a statement of saying, "I am here. I live here. This is my community and this my way of being able to get the resources and the representation that I deserve as someone that pays taxes in this community," which is everyone in this country, including undocumented people. That's why United We Dream is embarking on efforts to ensure that we recruit people from those neighborhoods to ensure that the people knocking on the door are their neighbors, people that they know and that they can trust and can walk them through the very complicated piece about what the census is. [This is important because] of the effort that Donald Trump is doing to thwart our people from actually accessing census work. I would open my door and I will sit with my neighbor that works with United We Dream to count everybody and I'll be able to walk someone through, ensuring that they are able to fill out the application as well as they possibly can.

Marco Werman: You're saying that you would answer that question and you would advise other people to answer it?

There is a duty for all of us to fill out the census and be counted. It is our right as people that live in this country and the census has many more questions than just the citizenship one. It is right for us to focus on that question because it is an unfair use of power by the Trump administration to threaten immigrants in this country, but I also think it's important for all of us to be counted. We don't know where we're going to land on the citizenship question. There's still a lot of stuff in the air. We've seen Donald Trump be clear about wanting to use it against people of color, but we are also clear that we're not going to stop until all of our people are counted.

Answering the question, "Are you a citizen, yes or no?" Do you approve of that?

I think that question is unfair. I think that it's meant to drive fear in our hearts. It's also, unfortunately, part of an awful tradition of the census being used for racially charged actions. We can think back to the Japanese internment camps and how the census information was actually used to be able to round up Japanese Americans. I think that it's important for us to be grounded in the history, to go into this process with eyes wide open and to ensure that the communities are counted and that we're filling out the census, but that we're doing so with a clear goal of ensuring that we have what we deserve: the power of representation in this country.

I imagine volunteering the sort of information about your status, handing it over to authorities, could be a very emotional issue for people like you who are undocumented and have undocumented family members. Just how fraught is that decision?

I remember signing up for the Deferred Action for Childhood Arrivals program that we won in 2012 and I was asked to give up all of my information to be able to have protection for two years. It was a scary moment. It is something that I had to do with the full backing of my family and knowing that my community and United We Dream, the people that we organize, would have my back. Although the census is different, some of the same principles apply. We're doing this counting because we believe that we're part of communities that will have each other's back, because we think that that's the right thing to do to ensure that we have what we need and because it's part of our duty.

It is illegal for the US Census Bureau to report individuals to Immigration and Customs Enforcement. Does that reassure you at all?

I think that is one of the safeguards and I think that that's part of the goal of ensuring that everybody knows that they should be counted and that there are some legal safeguards in place. Unfortunately, though, this administration has proven to lie continuously and to use unlawful methods to be able to advance their agenda. We will continue to be vigilant about this administration and continue to be ready to fight back because at the core of this conversation is really who owns our democracy and who gets to be able to participate in it. As someone who's very life depends on the vibrance of our democracy, I'm going to do everything I can and United We Dream will do everything we can to ensure that people are counted.

Of course. I can't tell you the number of times as I visit people across the country that they ask me what's going to happen with the census. "Should we fill it out? My mom or my dad are afraid about what it means to fill it out." Even people that are legal permanent residents. My answer to them has always been, "One, you're not alone. We're gonna figure this out together. Two, it is our right now and part of our responsibility as people to live here to be counted. And three, if we are to be able to reclaim our democracy from those that have usurped it now we need to be able to have political power and for that, we need to be counted." We're going across the country and telling the people the same thing. It's our country and we need to make sure that we're counted in this effort.