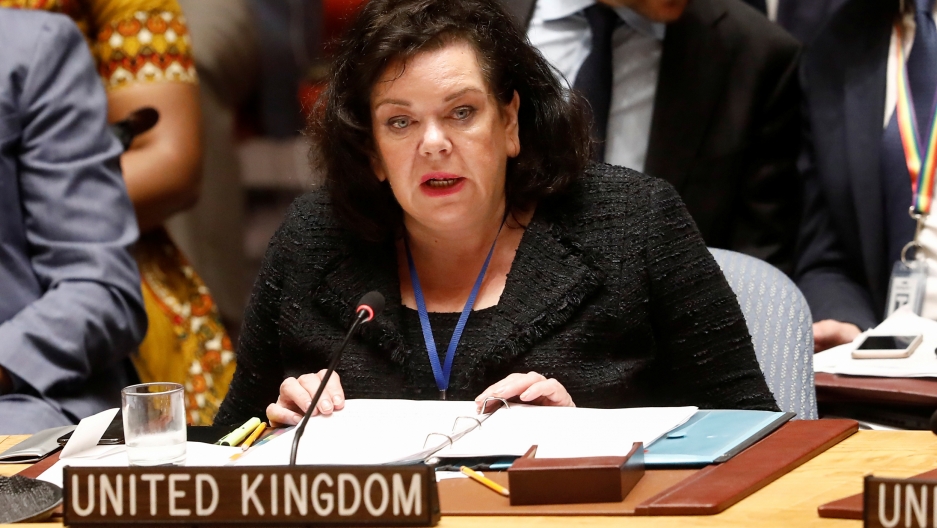 Karen Pierce, Britain's ambassador to the United Nations, addresses the UN Security Council briefing on implementation of the resolution that endorsed the Iran nuclear deal at the United Nations headquarters in New York, on June 26, 2019.

Iran threatened on Monday to restart deactivated centrifuges and ramp up enrichment of uranium to 20% purity as its next potential big move away from a 2015 nuclear agreement that Washington abandoned last year.

The threats, made by Tehran's nuclear agency spokesman, would go far beyond the small steps Iran has taken in the past week to nudge stocks of fissile material just beyond limits in the pact.

That could raise serious questions about whether the agreement, intended to block Iran from making a nuclear weapon, is still viable. The two threats would reverse major achievements of the agreement, although Iran omitted important details about how far it might go to returning to the status quo before the pact, when Western experts believed it could build a bomb within months.

The announcement puts stress on European countries that still support the Iran nuclear deal. The World's Marco Werman spoke to Karen Pierce, the British ambassador to the United Nations, about the deal.

"We're very concerned by the breach of the nuclear deal," Pierce said. "At the same time, if there is an opportunity to return Iran to compliance and keep the nuclear deal in place, then given the importance of that for nonproliferation reasons we'd like to take that opportunity. So, we will be talking within the Atomic Energy Authority, who now need to verify exactly what Iran has done and we will be taking stock of that and talking to the other participants in the nuclear deal — principally, the French and Germans — and working out if we believe there is a possible route back to compliance for Iran."

Marco Werman: Regardless of what the IAEA (International Atomic Energy Agency) says, Tehran would seem to be saying the nuclear deal is dead. Isn't that the new reality today?

Karen Pierce: Well, the Iranians, I think, are determined to do what they're doing in an incremental fashion. So, I don't think they have fully closed the door. But you're right, we need to look at exactly what they're saying. We need to assess what it means, if there is an opportunity to keep the nuclear deal in place, and that's something we will want to investigate.

Washington seems to have brought this problem upon itself by pulling out of the deal, we have to say that. Do you find that frustrating?

And what do you tell Iranian diplomats in private? I imagine you're not going to share with us exactly what you say, but what is the gist?

You're quite right. We prefer to observe diplomatic confidences. We have always made clear to Iran that we recognize she has legitimate security interests and we have made clear to Iran that we respect Iran as a country. She has a very ancient history, a very distinguished history. We would like to have a different sort of relationship with Iran. We would like to see Iran playing a full and mature role in regional security, but these activities that Iran engages in make that very hard to achieve.

So, finally, I can't imagine, Ambassador Pierce, the last 24 hours have been quiet for you — I'm referring, of course, to the fallout after leaked diplomatic memos published yesterday. They reveal the UK ambassador to the US, Kim Darroch, describing the Trump administration as diplomatically clumsy and inept. I don't expect you're willing to comment on the memos themselves, but what is it like for you to conduct diplomacy right now when the leadership of the US and the UK are so much in turmoil?

You're right, I can't comment on leaked documents. You know, obviously, government documents shouldn't be leaked and, equally obviously, diplomats around the world make candid assessments, which they share with their own governments, of their host. So, I won't comment on that. Kim Darroch is a good friend. He's an excellent diplomat. Here at the UN, we have been going about business as usual this morning. We were talking about UN reform, and there will be a debate on counterterrorism in the Security Council tomorrow. I've seen the US diplomats here this morning, and everything was as normal and very friendly.

In the background though, even before this news about these leaks, I mean the alliances that have held the world together in recent decades — they seem to be coming unstuck. Are you tossing and turning a lot?

Things are not coming unstuck so much as a different sort of evaluation is being made by certain countries as to whether to put short-term, national interests first rather than as might have happened, say, 15 years ago the predominant interests of a strategic alliance to which they belong. And I think this is all about how multilateralism is under threat at the moment. It's under threat from a lot of things including populism. And one part of this, of course, is solidifying, bolstering the institutions that we set up after World War II, where the US was very instrumental in setting up the UN itself, setting up the nonproliferation regimes. And I think it is important to bolster those, but at the same time, I think we have to recognize that the world looks very different from 1946. And we need to be much better, I think, modernizing these institutions so that they are also more representative of the fact that there are now many more countries on the world stage than was the case 70 years ago.

Related: The end of the Iran nuclear deal is hurting American businesses

Is there anything interfering with your sleep as the UK ambassador to the UN?

Oh, lots of things interfere with my sleep. Quite often the traffic from FDR (a highway running alongside the east side of Manhattan near the UN). But you know, it's such a privilege to be here. And the reason it interferes with my sleep is because I sleep with my curtains and windows open, so, I can see the sunrise. I face east. So, that's a bonus.

You've got no fears right now?

Well, I have some, but I think probably I shall keep it to myself and I'll work them out quietly with our partners and friends, which include the United States.