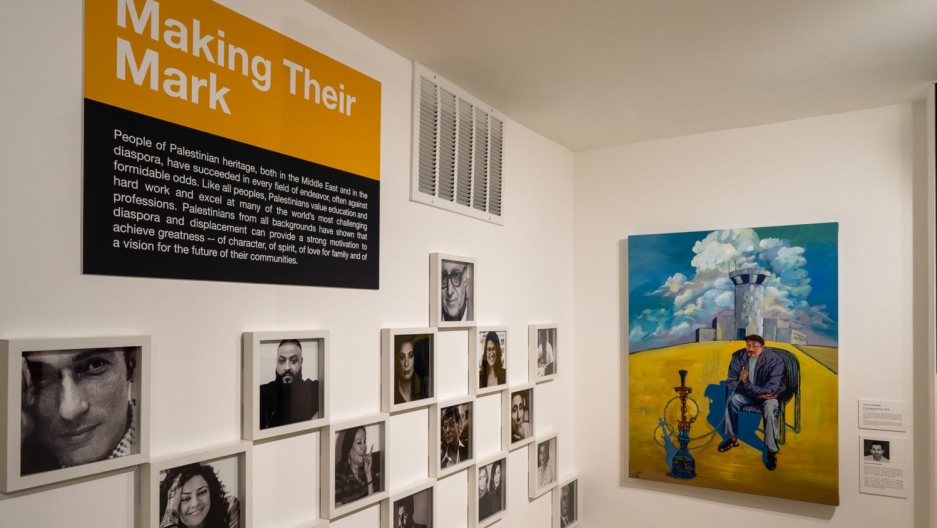 One wall in the museum is a who’s who of famous Palestinians.

When visitors walk into the newly opened Museum of the Palestinian People in Washington, DC, the first object they will see is a green water jug. It’s made of glass from Hebron, a city in the West Bank known for its glass-blowing tradition.

What visitors won’t see is overtly political content, even in a museum about an area that’s been enmeshed in a violent geopolitical conflict for the better part of a century.

The focus on everyday objects is something of a guiding principle for the Museum of the Palestinian People, which opened Saturday in a modest, one-room space just north of Dupont Circle. The museum’s founder, Bshara Nassar, aimed to create a space that is more personal than political.

As you finish your tour of the museum, you will have the opportunity to write a reflection on a canvas to share how you felt and what impacted you most. What one visitor wrote resonates with many who come through our doors; “I am not alone”. When we spoke with Ghada, a Palestinian from Gaza, she shared how incredibly moved she felt to have a place that shares about her people and her experiences for the world to hear and where she connected with Palestinian artists’ works that share her love for Palestine and hope for a vibrant future of freedom and peace. #MPPDC

A post shared by Museum of Palestinian People (@museumpalestinianpeople) on Jun 22, 2019 at 1:36pm PDT

“We want, really, [to] transform the story and put Palestinians in the light that we are human beings,” said Nassar. “We’re artists, we’re entrepreneurs, we’re in politics and we [are] contributing a lot to the US as immigrants.”

Nassar grew up in Bethlehem and immigrated to the United States in 2011. When he came to DC, he saw a cultural landscape full of museums but lacking in places to learn about his culture and people. He opened a traveling exhibition on Palestinian culture in 2015 and began to collaborate with local arts organizations to, as he put it, “introduce to our audiences what it means to be Palestinians in the world.”

In the last week, we've received over a dozen professional proposals from sculptures, graphic designers, painters, & film makers to bring their unique stories to share in Washington, DC! Today, we are sharing just a few of these incredible Palestinian artists! Your end of year giving creates the possibility for these Palestinian voices to tell their owns stories for the world to hear! (Link in profile to GIVE) . . . #bringpalestinetodc #mppstories #musesocial #dcmuseums #washingtondc#dc #palestinian #palestine #art #storytelling #solidarity #nonprofit#representation

A post shared by Museum of Palestinian People (@museumpalestinianpeople) on Dec 31, 2018 at 11:40am PST

That traveling exhibition would become the basis of what’s now the Museum of the Palestinian People. Its permanent exhibition focuses on Palestinian history and culture in four segments: “A Remarkable People,” “Nakba and the Diaspora,” “Occupation” and “A Resilient People.” The objects on display include a half-dozen pieces of pottery, a National Geographic map of the “Bible Lands,” black-and-white photographs of traditional wedding ceremonies dating back to the early 1900s and a mannequin outfitted in a traditionally embroidered Palestinian dress.

The exhibits are comprised of a mix of items on loan from private collections, photographs in the public domain and items from the museum’s own collections.

The museum’s temporary exhibition, “Reimagining the Future,” features works by five artists living in the global Palestinian diaspora. There is also a “wall of fame” with photographs of famous musicians, politicians and cultural creators of Palestinian heritage, from recording artist DJ Khaled to Representative Rashida Tlaib (D-Mich.), the first Palestinian American woman elected to Congress.

However, due to the complexity and sheer length of the conflict between Israel and the occupied territories, it is functionally impossible to separate politics from any exhibition about the region. Even something as straightforward as one person’s identification documents is weighed down by years of struggle.

Close to the museum’s entrance hangs a 1946 British passport for the Palestine Mandate. Another set of identification documents for the same person hang next to it, dating to 1948.

The museum’s signage explains that, in 1947, the United Nations voted “to partition Palestine and establish a Jewish state.” Palestinians refer to this period as the Nakba, or “catastrophe.” Due to the partition, the 1946 passport was rendered out-of-date and the owner was assumedly required to apply for new documents.

Many people have written us eager to partner to create this #museum as a landmark in #DC to share diverse #Palestinian #stories! Help us open our doors by spreading the word & donating (link in profile)!

A post shared by Museum of Palestinian People (@museumpalestinianpeople) on Aug 22, 2018 at 3:02pm PDT

The museum does not go into further detail of the decades-long conflict. There are barely any mentions of Israeli Prime Minister Benjamin Netanyahu or former Palestinian National Authority President Yasser Arafat, suicide bombings or human rights abuses, the Israeli Defense Forces or Hamas. Museum leaders say they want to keep the exhibits as apolitical as possible.

Still, said curator Nada Odeh, “there is a true story” in her eyes. “There [are] people who are displaced because someone came and took the land.” She was referencing the Nakba and the founding of the state of Israel.

However, she too maintained that the museum is not political. “We’re always thinking about occupation and who’s winning and who’s losing, but the reality behind all of this is, there’s humans. This is the most important,” she said.

Nassar has become a frequent presence on panel discussions around town about the Israeli-Palestinian conflict, and he and the museum’s chairman, Nizar Farsakh, have consulted on local productions at the Mosaic Theater Company and the Round House Theatre. They’ve also been closely involved in Mosaic’s Voices From a Changing Middle East festival and have lent the theater items from their collection to display.

“We support each others’ initiatives,” said Ari Roth, Mosaic’s founding artistic director. His festival is dedicated to fostering cross-cultural exchanges around the Israeli-Palestinian conflict. “I find them very valuable interlocutors, and I think that’s the promise of the museum as well.”

The facility is a relatively modest endeavor when compared with other private museums like the Museum of the Bible, which opened in 2017 inside a $500 million facility three blocks from the National Mall. The Museum of the Palestinian People cost $200,000 to open, funded by private donations; the majority of those donations were under $500.

Related: A makeshift museum is now home to objects from Palestine

The opening comes a little more than a year after a similar endeavor, the Palestinian Museum, opened in Woodbridge, Connecticut. That museum billed itself as the first of its kind in the Americas.

“Re-imaging a Future” is the inaugural exhibit at The Museum of the Palestinian People in Washington, DC featuring artwork by Palestinian artists from the U.S., Canada, the West Bank, Gaza and Israel. ⠀ ⠀ A new Palestinian artistic global identity is emerging and with it a sense of hope for the future of Palestine. The exhibit is imaginative and courageous and an act of creative resistance. ⠀ ⠀ “Our stories are many, our hearts are one”⠀ ⠀ Look for our complete story this week at DCtrending.com. Link in profile ↗️⠀ ⠀ #BringPalestinetoDC ⠀ ⠀ #MuseumofthePalestinianPeople ⠀ #washingtondaily

The DC museum’s opening also comes nine months after the Trump administration closed the DC office of the Palestine Liberation Organization (PLO), effectively shuttering the Palestinian diplomatic mission to the United States. President Trump is a staunch supporter of Israel and has cut off major sources of aid to the Palestinians.

The PLO mission closure weighed heavily on the mind of Yoseph Hamid, who recently moved to Washington from Buffalo, New York and visited the Museum of the Palestinian People on its opening weekend.

“The relationship between Palestinians and Americans, like, government-wise, is tense,” he said. He hoped that a museum like this one would help erase tensions between the everyday people trapped on either side of the conflict. “Something like this,” he said, looking around the exhibition, “it gives you hope.”

During the opening weekend, Nassar said that he hoped that the museum would attract a diverse audience.

“We welcome people with open hearts and open arms,” he said. “It doesn’t matter if they agree or not. The most important is the conversation.”

A version of this story originally appeared on WAMU.org.