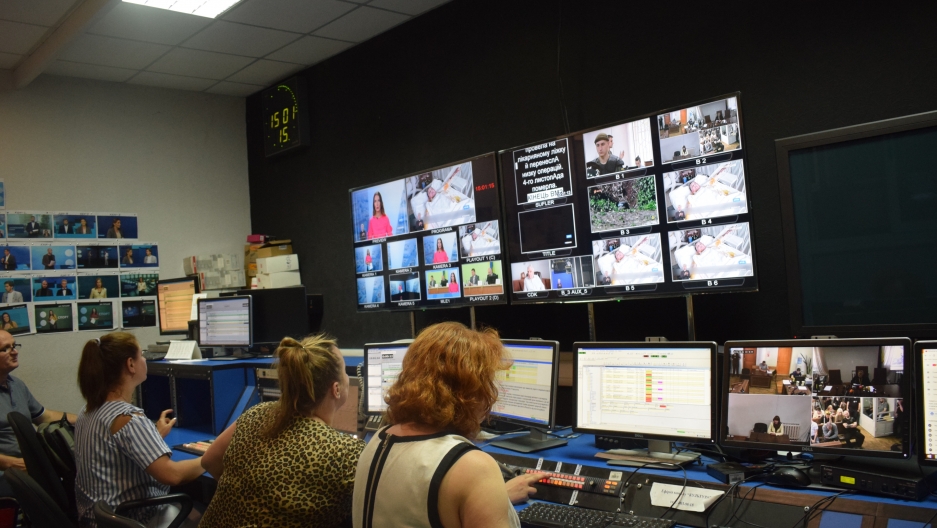 A control room at the headquarters of Ukraine's public broadcaster, UA: PBC in Kyiv, Ukraine.

In Ukraine, there’s a tradition: "If you have the media, you are king." That’s according to Zurab Alasania, the head of the National Public Broadcasting Company of Ukraine, or UA: PBC.

In January, Alasania was ousted by the politically appointed governing board of UA: PBC.

Under his leadership, he’s been trying to transform the company from a Soviet-era government mouthpiece to a bastion of independent journalism — and this has been met with considerable resistance from some quarters, including drastic underfunding by Ukraine’s parliament.

On June 19, a judge in Kyiv, the capital, ruled that Alasania’s dismissal was illegal. But with a new president in power, parliamentary elections set for July and multiple, ongoing challenges to press freedom, the future of Ukraine’s public broadcaster remains unclear. 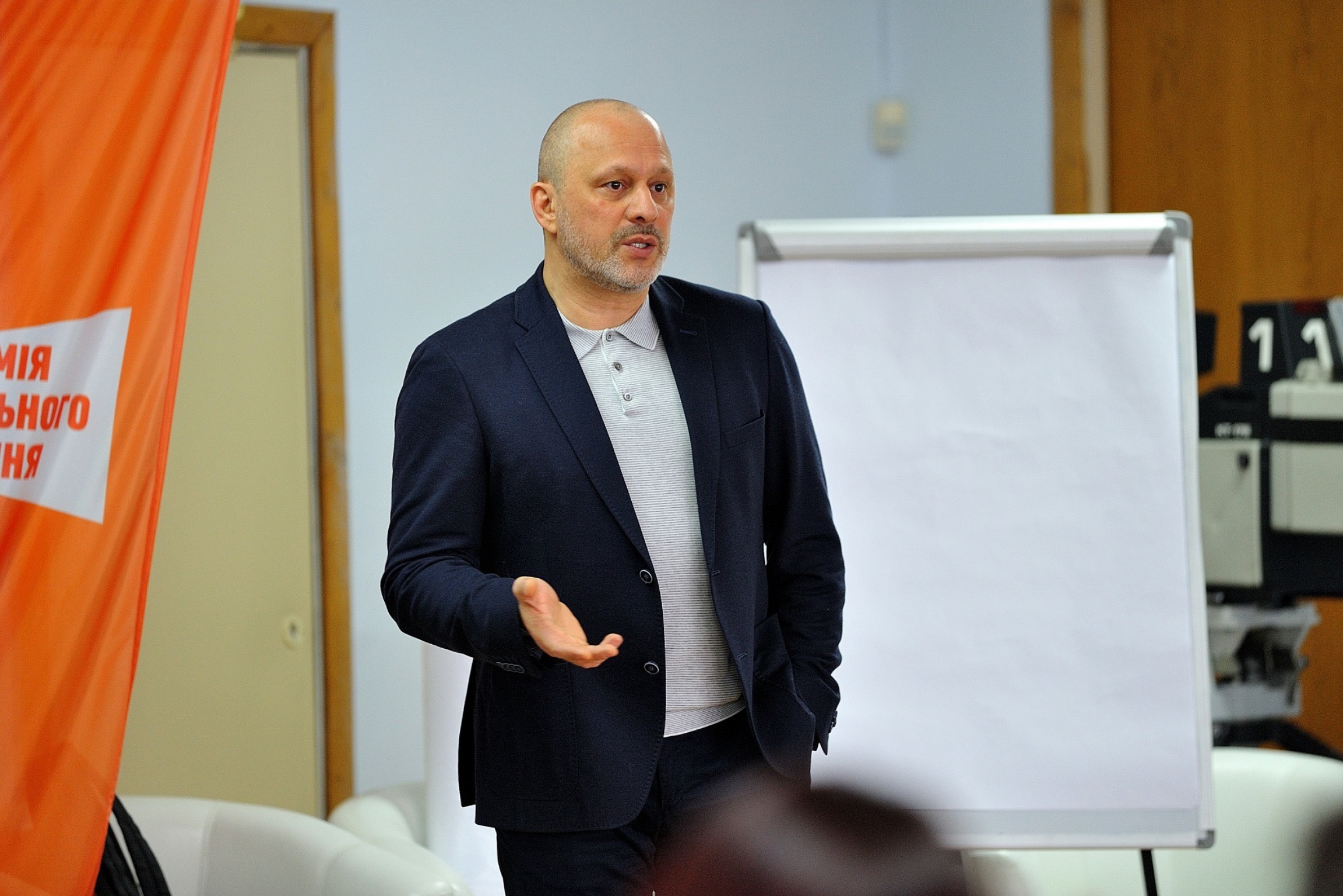 Journalist Zurab Alasania speaks to his staff at UA: PBC.

Alasania, a former journalist, spoke to The World over the phone about his country’s media landscape, which today is dominated by the country’s oligarch class — business and political elites who also own most of Ukraine’s news outlets.

In 2014, when mass protests throughout Ukraine called for sweeping democratic reforms, advocates for reforming public media sensed this might be their moment.

Alasania, known for his propensity to shake things up, was hired as head of the organization and took on the process of consolidating the country’s public media into one organization as UA: PBC, which took full effect in 2017.

Even more difficult was letting local authorities know that they could no longer expect to use their public broadcasters as personal PR outlets.

Reorganizing the country’s stations, implementing new professional standards and, in many cases, firing staff was a difficult process. Even more difficult was letting local authorities know that they could no longer expect to use their public broadcasters as personal PR outlets.

Related: A mining town in Ukraine looks to one of their own for president

Additional challenges to the organization came when Ukraine’s parliament funded the broadcaster for only about half of the budget stipulated for it by law in 2018 and 2019. He says this left them with barely enough money to survive.

Then, at the end of January, just before the presidential elections, the governing board of UA: PBC, made up of representatives appointed by political parties, voted to remove Alasania as head of the company.

This was met with considerable outcry both from within Ukraine and internationally and the board was accused of politically motivated censorship.

One possible motive was that UA: PBC had begun airing programs that included investigations of then-President Petro Poroshenko.

Alasania says that even before he was dismissed, the message was conveyed to him through intermediaries that the show was unacceptable to the Poroshenko administration.

When the court overturned Alasania’s dismissal, it looked like a sign of hope, but uncertainty remains. It is still unclear what attitude the Zelenskiy administration will take toward UA: PBC.

Alasania says representatives from the new government have approached him with the idea of making the broadcaster part of an effort to counter Russian information warfare with homegrown propaganda.

“They said, 'We are writing this strategy,'” says Alasania, “'and you are part of this plan.'” But, he says, this is antithetical to UA: PBC’s mission, which is to focus coverage away from black-and-white narratives and stories designed to appeal to emotions.

In April, far from Kyiv, in the southern port city of Odessa, Iryna Kyporenko sat in her small office at UA: Odessa, a local branch of UA: PBC, in a building that has housed local radio and TV stations since the city was part of the Soviet Union. 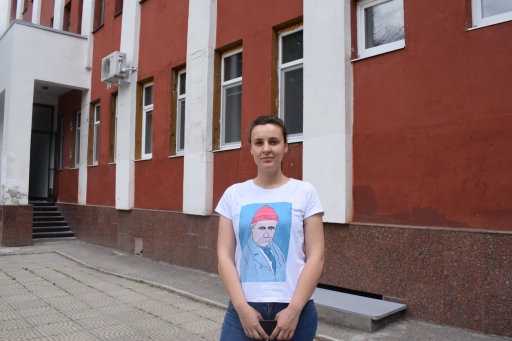 Iryna Kyporenko poses for a photo outside UA: Odessa.

Kyporenko laughed as she recalled her first days there as a television producer. “When I came here, at first, more than a year ago, I felt like I had come back to the ‘80s, but I was born near the '90s!” Kyporenko, 30, says.

The dark hallways and aging studios of the UA: Odessa building have a retro look, but what’s happening inside is decidedly forward-looking.

On that day, Kyporenko’s team was covering Ukraine’s presidential election, which garnered worldwide attention as it pitted Poroshenko against TV comedian Volodymyr Zelenskiy, who eventually won the race in a landslide vote.

The election itself reflected Ukraine’s complex media ownership environment, with Poroshenko continuing to own the TV station, Channel 5 (despite earlier promises to sell it) and Zelenskiy having built his career at 1+1, a station owned by billionaire businessman Ihor Kolomoiskiy, widely believed to have backed his candidacy, though he denies it. Other channels are owned by a small number of players in politics and industries such as oil and gas, metallurgy and banking.

During the election, Detektor Media, a Ukrainian media monitoring nongovernmental organization, found political bias across coverage by all major commercial TV channels but reported the greatest bias on channels associated with Poroshenko and Zelenskiy.

On election day at UA: Odessa, Kyporenko said that her team’s top goal was to stay politically neutral, but also to find and tell stories that were locally relevant, not just entertaining. In one example, she sent a reporter to follow the voting process for a visually impaired woman at her local polling station. The story took a deeper look at problems faced by people with disabilities who attempt to vote when that woman was turned away.

Kyporenko says this kind of story — focused on real community issues — is what differentiates her station’s work from the flashier coverage offered by commercial outlets.

Kyporenko describes the infotainment dominated coverage at local commercial stations as “candy” and the coverage provided by UA: Odessa as “vegetables.” “It’s good for you,” she says.

This is UA: PBC’s way of working to gain trust in a country where much of the population has a high level of distrust in the news media.

In 2014, those mass protests, later known as the Maidan Revolution, toppled then-President Viktor Yanukovych and led to the annexation of Crimea by Russia. Conflict with Russian-backed separatists in the Donbas region of eastern Ukraine led to a sustained Russian disinformation campaign aimed at sowing discord within Ukrainian society.

Since then, efforts to combat the spread of disinformation have included measures ranging from internationally funded media literacy programs to the banning of Russian websites and TV channels — a move that led to free speech concerns among international observers. 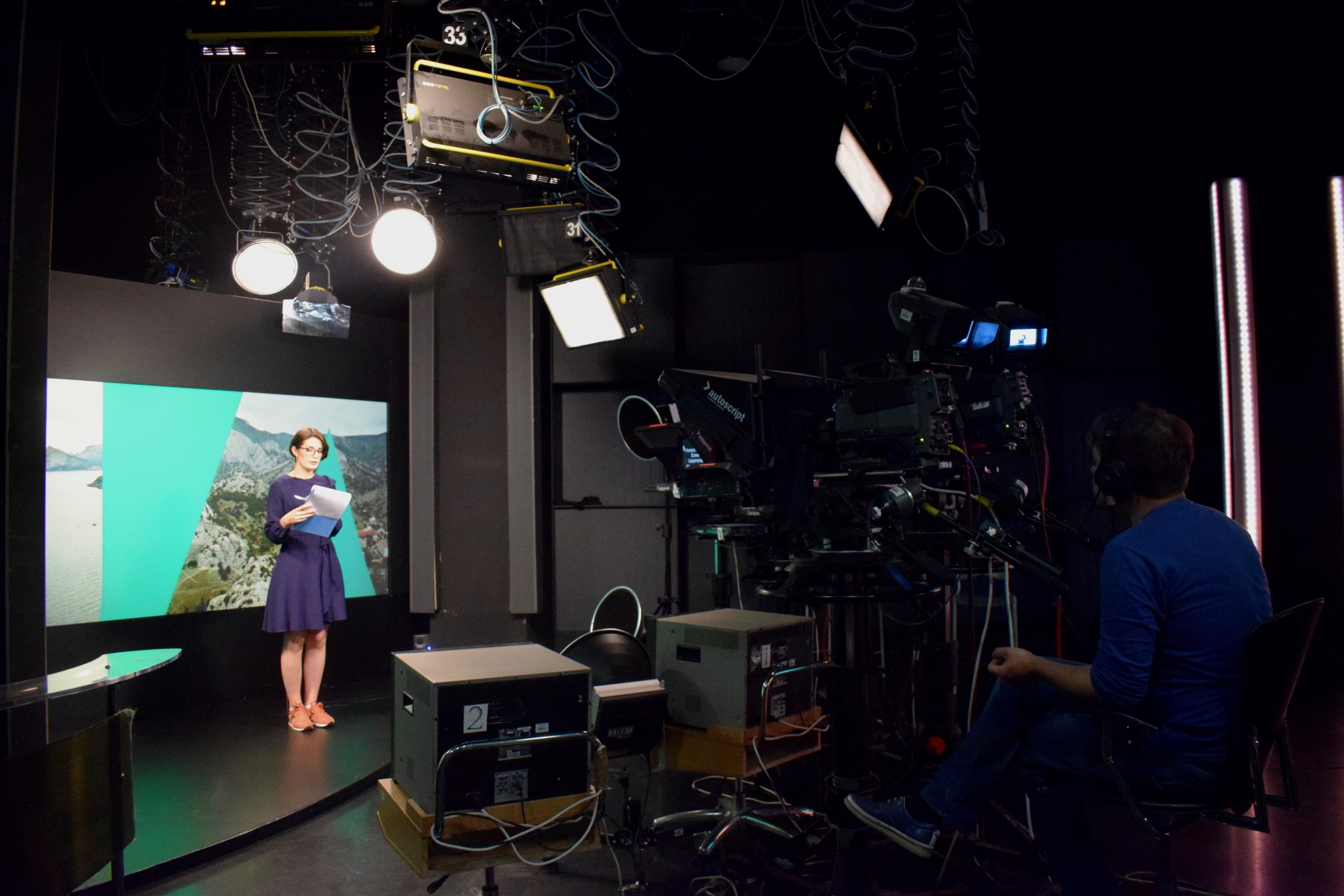 TV presenter Elizaveta Tsaregradska prepares for a news broadcast for UA: Crimea, which is broadcast into the region annexed by Russia in 2014.

Adding to the distrust is a perpetual problem that has long plagued Ukrainian journalism: jeansa. The term refers to unmarked, integrated political advertising paid for by a politician. The word originates from the notion of a cash bribe supposedly slipped into the pocket of a denim-sporting journalist.

According to the Commission on Journalism Ethics, a consortium of Ukrainian and international media-monitoring organizations, during the April elections, UA: PBC was the only television outlet that appeared free of jeansa.

These combined issues have created an environment in which 43% of Ukrainians distrust the country’s mass media, according to data from the Kyiv International Institute of Sociology, and in this context, a truly independent public media outlet has huge potential to make an impact on civic trust.

This was recognized early on by members of Ukrainian civil society groups, who began working to reform the country’s public media soon after Ukraine gained independence from the Soviet Union in the early '90s. But the process was slow-going, says Ihor Rozkladai, a media lawyer who helped draft the law that reorganized the public broadcaster and established its editorial independence.

Rozkladai pulls a thick binder off the shelf on his office. “This is what the history of this looks like,” he says. There were many attempts at reform over the decades, but politicians always found reasons to strike down even minor changes.

“The problem was that it was a platform for whoever was currently in power to broadcast themselves,” says Anna Korbut, a fellow at Chatham House who researches Ukrainian media. “It wasn’t really a respected broadcaster.” But people had broad access to it — and that was the source of its power.

With a new parliament set to be voted on in July, there is great uncertainty as to the makeup of the new governing board of the public broadcaster, and whether the next parliament will be inclined to fully fund it.

Despite these lingering questions, Alasania has ambitious goals for UA: PBC’s future.

He hopes to develop its own in-house investigative reporting team, though he admits this may bring still more pressure from on high. Critically, he also hopes to grow UA: PBC’s audience, still comparatively tiny, to the point where it can compete with commercial channels.

He sees this as a process that may still take five or ten more years.

But for now, it appears that Alasania will survive another day at his post, and so will the vision of an independent public broadcaster that he and his staff have been working toward.

“I do not care about any post or chair,” says Alasania. "What I do care about is UA: PBC’s reform.”