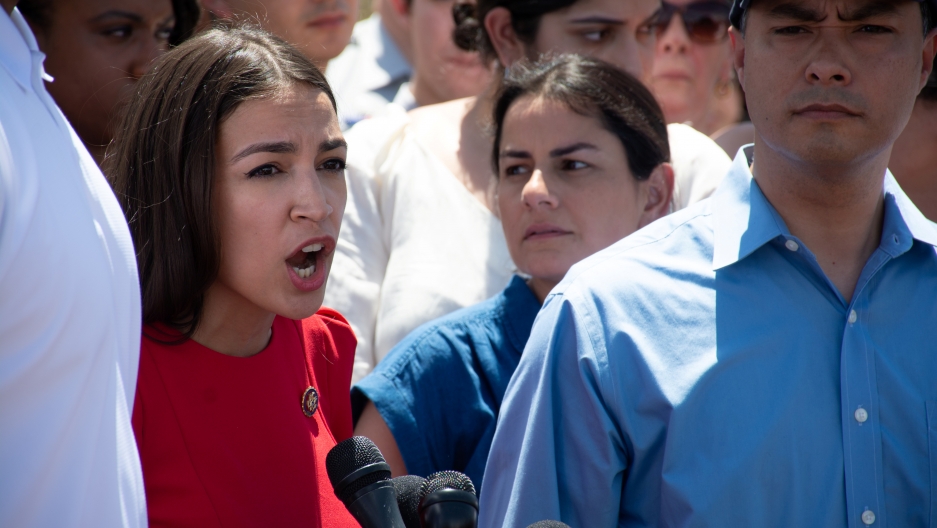 US Representative Alexandria Ocasio-Cortez, standing near Rep. Joaquin Castro, speaks to the news media after she and other members of Congress toured two Border Patrol stations following reports of migrants kept in inadequate conditions, in Clint, Texas, on July 1, 2019. Rep. Judy Chu is not pictured.

US Customs and Border Protection will investigate a Facebook group after ProPublica published an article Monday revealing how CBP agents used the group to share racist jokes and offensive insults against migrants and members of Congress.

Border Patrol Chief Carla Provost issued a statement saying: "Any employees found to have violated our standards of conduct will be held accountable."

The group's existence was exposed just as a congressional delegation was visiting a Border Patrol station in El Paso and a migrant detention center in Clint, Texas.

Clint was the site that gained notoriety last month when attorneys described squalid conditions there and mistreatment of children. And it seems both facilities still have problems.

Representative Judy Chu, a California Democrat, was part of the congressional delegation that visited both sites. She spoke to The World's Marco Werman about what she saw.

Rep. Judy Chu: In the El Paso Border Patrol station we saw women in their cells, and as soon as they realized we were Congress members they told us their stories with tears coming down their faces. They talked about being separated from their children. They talked about not knowing when they were going to leave, and most had been there for over 50 days. Some of them had talked about not getting the medications that they needed. One was an epileptic and still had not gotten her medication. They talked about not having running water and, in fact, one said that a CBP agent had told her to drink water out of a toilet in order to get her water.

The World: Was she the only person you spoke to who gave that account?

She actually told Alexandria Ocasio-Cortez about this. So she was the only one that talked about being told this by the CBP officer. But others talked about not having running water.

What is the usual time limit in a center like this and what kind of center is this?

This is the transitional station in which migrants are first processed. And for children, there is a limit of 72 hours. But there is not supposed to be this long period of time for anybody. So, to think that these women are in their cells for over 50 days is just appalling. And, of course, they have terrible conditions. In fact, they said that they were in these little tent cities within El Paso, and for the day they were brought into these cells which were air-conditioned. And so there was clearly an attempt to sanitize the situation which we also saw at the Clint Border Patrol station.

What stood out for you in Clint, Texas, yesterday?

What stood out for me is that they clearly tried to sanitize it. I was shocked because we heard reports of the number of children there being at a high of 700. When we got there, there was a magically low number of 25, which led us to ask, "Well why did you say that there was a crisis of people coming over the border?" And they took great pains to show us, "Oh, there's tremendous supplies that toothbrushes, soap and food." But we were able to see the warehouse were over a hundred children were housed. It was like a gigantic-scale shed with no air-conditioning at the time. And in this location temperatures frequently get to over 100 degrees. And the most disturbing thing is they denied all the reports of the lawyers that had come in previous weeks — the reports of children ... not having been able to clean for nearly a month. Clothes caked with snot and tears. Toddlers without diapers relieving themselves in their pants. They denied all of that.

And you didn't see any evidence of that yourself?

Basically, they cleared out the children. We saw toddlers pressing their little faces against the cells, and that was about it. But we did not see the children out in the play area because they had drastically reduced the amount of people there.

Where did they go?

I do not know.

Yes, we did ask, and they said, "Oh, there are fewer children coming over the border."

What was your interaction like with the CBP agents? What did you think of their conduct?

That was also appalling. Of course, the supervisors treated us very officially. But that morning we had gotten notice of the ProPublica article about the Facebook page of the CBP agents.

We were right there when we got notice of the ProPublica article. We were all there together reading this article and seeing these disgusting images of Alexandria Ocasio-Cortez and reading about their jokes about the death of migrants, including that father and daughter. It was such a moving image, and they were laughing at it. They also talked about wanting to throw burritos at us as we were investigating at the stations. So just to see this underground group of agents out of control, doing and saying what they like — that was of huge concern to us, and we even felt concerned about our safety.

Look, I know they have a tough job and there is a lot of stress there. But to see how blatantly they disregard Congress members, can you imagine what they are doing to migrants that are totally under their control?

The CBP came out with a statement very much distancing themselves from this Facebook group. Can US congresspeople request CBP to discipline anybody who is involved with this?

That's what we're calling for. We are calling for accountability for the organizers of this Facebook page. It is not right, and they need to be held accountable for this.

You're following up with this request for some kind of sanction on these CBP agents. What are you planning to do to address what you saw yesterday down in Texas?

Clearly what we had proposed for the border supplemental bill that was passed last week was needed. These provisions in the House bill included standards for medical care and medical emergencies, nutrition, hygiene ... and personnel training for CBP agents. And that was left out of the Senate bill that was passed, including accountability for the funds so that the designated purposes were the only purposes for which the money could be used — and not for deportation and enforcement purposes. Also, I think the most critical thing was that there should have been the ability for us to have unannounced visits, because it is clear that CBP sanitizes the situation before we come. And so what's really important is for us to have the unannounced visits so we could see for ourselves what is really going on. That was in the [original] bill, and it wasn't in the final passage of the bill. This is what we have to go back and continue to push for.

There are some Democratic lawmakers who say the bill did not go far enough, and that's why they voted against it. Did you vote for or against it?

Oh, I definitely voted against it.

Do you feel that in order to push your view on immigration that maybe you're cheating some of these people down along the border who actually need that money right now?

I was for the House version of the bill, which had all the money in it, but it had accountability for how the money is spent. The American taxpayer shouldn't be spending $4.5 billion dollars without accountability, without actually improving the condition down there. And that is what needs to be done. So that's why I could not vote for this bill. Not in good conscience.