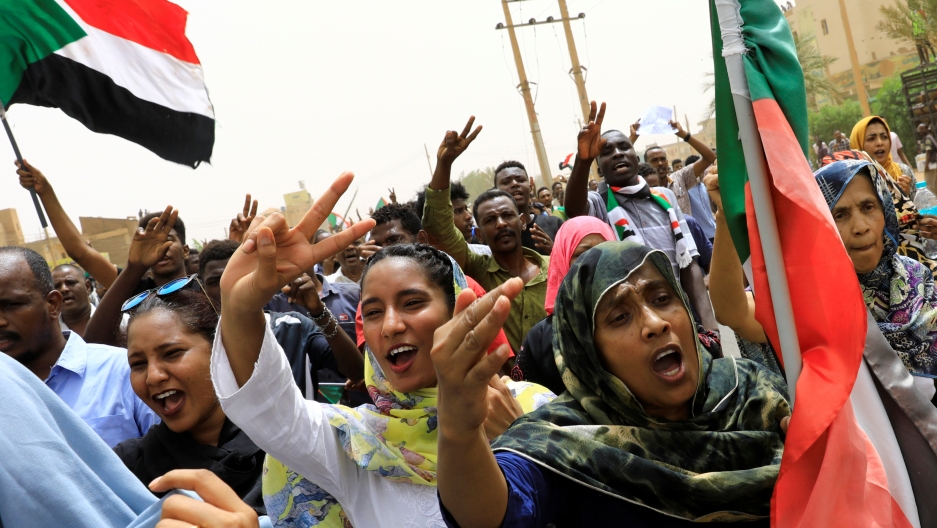 People shout slogans as they march on the streets demanding the ruling military hand over to civilians during a demonstration in Khartoum, Sudan, June 30, 2019.

Sudanese pro-democracy protesters took to the streets over the weekend to demonstrate against military rule.

The Transitional Military Council has ruled the country since April, when the military ousted longtime President Omar al-Bashir. At least seven people died in Sunday's protest, according to the state news agency. It was the largest protest since June 3, when dozens of protesters were killed in a bloody crackdown.

Dallia Abdel-Moniem is an activist who participated in the weekend's protests. She spoke to The World's Marco Werman on how protesters recovered after June 3 — and the message they wanted to send by raising their voices again.

Abdel-Moniem: We had two clear messages. The people who've lost their lives during the start of this revolution from December until now, they're not forgotten. It wasn't in vain. And the second message was that we demand and we want a civilian government. We refuse to accept anything less than that.

The World: Do you feel that you're any closer to that goal of democracy?

Look, it's not going to happen overnight. I mean, we are talking about a regime that's been in power for 30 years. So, you're not going to just remove it overnight and expect democracy to flourish the next day. But we will start inching towards it. The first step is that the Military Council released a statement saying, "OK, we're willing to go back to negotiations again." So, that's a big step because they were refusing to acknowledge or even take part in any negotiations.

How were those negotiations going? Are you sitting down with them? Are there representatives of the demonstrators?

The African Union, along with the representative of the Ethiopian government, are acting as mediators. And it's good because you have someone who's not directly involved with what's happening to mediate. It's like a divorce lawyer or a divorce mediation, you know — just trying to get both sides to reach an agreement to find the middle ground.

You spoke about the lives that have been lost in protests since December. The last big protest against military rule was last month, June 3, and it ended with a lot of violence, dozens of people killed, many people injured. And a lot of people said that would slow down your movement. Why did the violence not deter you?

It took us a while to recover from the massacre of June 3. For a whole month, this whole country was just in the doldrums. I wouldn't say we were depressed, but it affected us in every way. But we also used that to galvanize ourselves, to push ourselves forward because those who were sitting at that sit-in ... for a month at the sit-in area, they weren't doing it for themselves. They were doing it for all of us. So, if we were to sit back and say, "OK it's over," then their lives would have been lost in vain. So there was no way we would have allowed this to just continue. And it took us a while. We've been working on it for a month now, and the result was what we saw yesterday.

What is day-to-day life been like in the last month for you? Are pro-government forces trying to intimidate you and others in any way?

Yeah. When the militia forces, the Janjaweed — or, they're also known as the Rapid Support Forces — they're all over the city. I mean, wherever you go you just see them parked in their armored vehicles with their weaponry. I'm talking rockets and bullets. And it's a quite scary sight to see. But we're still trying to — I won't say trying to get normal day-to-day life, but we're just trying to plod along just to get through the day.

It seems the government in Sudan is trying to limit the means that you have at your disposal for weeks now. For example, the internet has been shut down. How did you manage to find any Wi-Fi to speak with us?

I'm one of the lucky few. My internet provider is actually the same provider for the government and for the banking system and for the foreign embassies in the country. So, they can't afford to shut that down, otherwise literally the whole country will be shut down in blackout. So I'm just fortunate. It's just a matter of luck, honestly.

What about everybody else? How are they communicating? How did people manage to organize yesterday's demonstrations, for example?

Mass text messaging, calling, door-to-door canvassing, flyers given out at open markets and the transport stops. And that's — we just manage. We just went back to the old ways. I mean, when we had a revolution in '85, we didn't have internet. When we had the revolution in the '60s we didn't have internet. So we were able to overthrow two governments back then. I'm pretty sure we can overthrow another one today.

I've seen on Twitter more than one protester in Khartoum saying they are ready to die for the cause of democracy. How widespread is that sentiment? Are you ready for that?

If we weren't ready we wouldn't have gone out yesterday. The militia are really armed to the teeth. And they're in your face. Every corner you turn, they are there, and we knew at any second they could just unleash their bullets on us, and we could be dead. But we still went out. That tells a lot. That says it, you know. We are willing to die. We are we're not going to give up so easily and so soon. We've come too far. We've lost too much to give up and say, "OK, here you are. Here's the whole country on a silver platter." No. We will fight, whatever means that we can, peacefully, until we attain that goal. And that's our aim. It's always been our aim, and there's no going back. I can't see us going back.