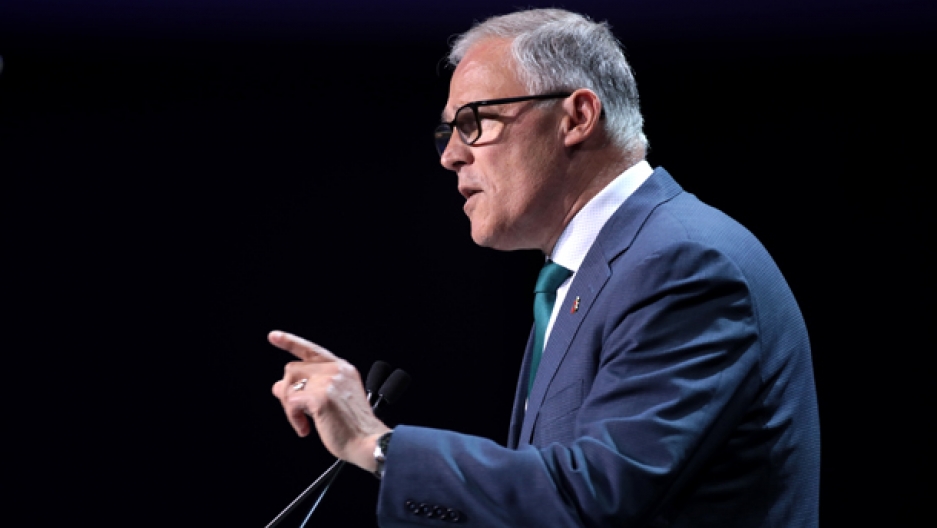 Democratic presidential hopeful and Washington Governor Jay Inslee fared best on Greenpeace’s climate scorecard but still didn’t make a perfect grade: He received an A-. The organization says all the 2020 presidential candidates have room for improvements in terms of their climate commitments.

Climate change was barely mentioned during the 2016 presidential election, but this time around many Democratic presidential contenders are pledging climate action.

With over twenty Democratic candidates it can be hard to keep track of where they each stand on the climate crisis. To sort it all out, Greenpeace USA put together a climate scorecard, grading each candidate on his or her support for a Green New Deal and for phasing out fossil fuels.

Greenpeace sent a survey to every campaign office and asked for detailed answers to 21 questions. They received answers from only five candidates — Cory Booker, Tulsi Gabbard, Kirsten Gillibrand, Jay Inslee and Elizabeth Warren.

The organization sent a survey to every campaign office and asked for detailed answers to 21 questions. They received answers from only five candidates — Cory Booker, Tulsi Gabbard, Kirsten Gillibrand, Jay Inslee and Elizabeth Warren. They also looked at the public record for every candidate and examined their voting records, public statements and the climate platforms they have put forward.

At this early stage of the election season, Greenpeace wants to set “the level of ambition amongst candidates on climate change,” says Janet Redman, climate campaign director for Greenpeace USA.

“We're really pushing to make sure that all these candidates understand that the American public ... feels incredibly strongly that we need the next president to address both a Green New Deal and a fossil fuel phase out."

“We're really pushing to make sure that all these candidates understand that the American public ... feels incredibly strongly that we need the next president to address both a Green New Deal and a fossil fuel phase out,” she explains. “So, we were particularly looking for climate plans that candidates had put forward making ambitious statements, setting ambitious targets for action."

Redman says support for the Green New Deal is key because the plan looks at “how to move to 100% renewable energy in a way that's just and fair, both for workers and communities. It's about tackling the climate crisis, but making sure we're tackling economic crises and other injustices at the same time.”

Greenpeace evaluated each candidate on their support for the Paris Agreement, their commitment to reaching net zero greenhouse gas emissions, their stance on labor protections and climate resiliency and their commitment to moving toward zero emissions in the transport, power, building and industrial sectors, among other things.

Related: Offshore wind in the US could be critical to addressing climate change

The second category, phasing out the fossil fuel industry, is “the complement to the Green New Deal," Redman says. It involves “dialing down the dirty energy we already have under production…and making sure we're not expanding into new dirty energy; looking at whether or not candidates have committed to a responsible and managed phase-out of fossil fuels over time; whether they've committed to ending fossil fuel leasing on public lands, ending taxpayer subsidies to oil and gas, banning oil and gas exports and thinking about polluter accountability and environmental justice for those communities who are already impacted by production.”

Greenpeace and a coalition of many other environmental groups are asking every candidate to pledge not to accept any campaign money from the fossil fuel industry. So far, 18 of the leading Democratic presidential candidates have taken the pledge.

As part of this, Greenpeace and a coalition of many other environmental groups are asking every candidate to pledge not to accept any campaign money from the fossil fuel industry. So far, 18 of the leading Democratic presidential candidates have taken the pledge.

Redman says Greenpeace wants to see how each candidate plans to make “a responsible phase out” of the fossil fuel industry, in order to help workers and communities who will be affected.

“We want to make sure that we're putting plans in place now to responsibly phase that down over time,” she insists. “No one's talking about pulling the plug on all of the fossil fuel electricity generation right this second. What we're talking about is making sure, number one, we're not building new oil wells, we're not building new oil rigs, we're not going out and exploring for new oil and gas."

“Number two, let's put a plan in place, with the full weight of the federal government behind us, to make sure that we are, in fact, phasing out these fossil fuels in the way that is most responsible to people working in the industry and responsible to all the communities who depend right now on the fossil fuel industry as part of their tax base, as part of their jobs base,” Redman says. “We can do this; it just takes actual planning.”

The coal industry, she maintains, engaged in an “unmanaged transition” that has hurt people.

Here are Greenpeace’s current scores for the Democratic presidential candidates:

The candidates receiving the lowest grades, Redman explains, are those who have either not released a plan on climate change or who have said things that Greenpeace believes are counter to positive climate action — for example, calling natural gas a “bridge fuel,” when it's still a fossil fuel that will continue to contribute to climate change.