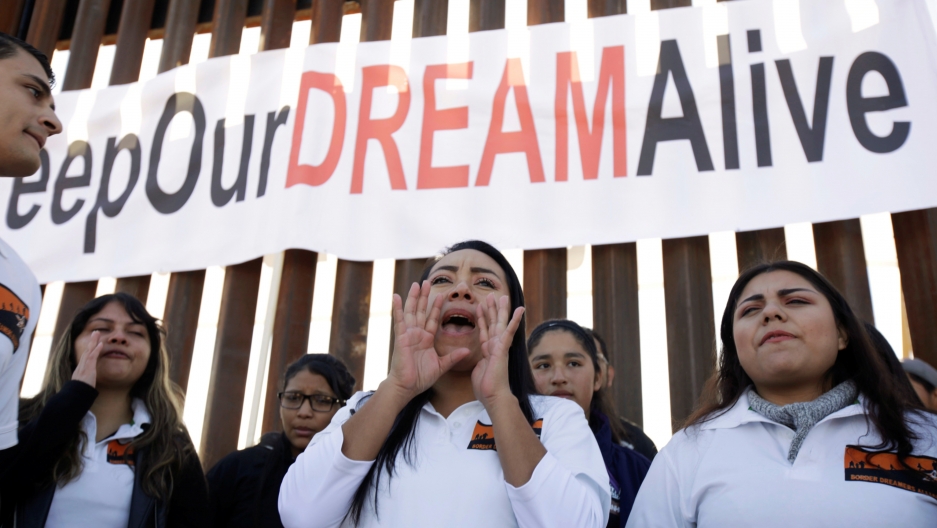 "Dreamers" react as they meet with relatives during the "Keep Our Dream Alive" binational meeting at a new section of the border wall on the US-Mexico border in Sunland Park, US, opposite the Mexican city of Ciudad Juárez, Mexico, Dec. 10, 2017.

The US Supreme Court on Friday agreed to decide whether President Donald Trump acted lawfully when he moved to end a program that shields from deportation hundreds of thousands of immigrants who were brought to the country illegally as children, a key part of his hard-line immigration policies.

The nine justices took up the Trump administration's appeals of three lower court rulings that blocked his 2017 move to rescind the Deferred Action for Childhood Arrivals (DACA) program implemented in 2012 by his Democratic predecessor Barack Obama. The program currently protects about 700,000 immigrants often called "Dreamers," mostly Hispanic young adults, from deportation and provides them work permits, though not a path to citizenship.

Related: This immigrant student's detention serves as a cautionary tale for DACA recipients

The court will hear arguments and issue a ruling in the case during its next term, which starts in October and ends in June 2020. The announcement came after a 5-4 ruling on Thursday, the last official day of the court's 2018-2019 term, that dealt a major setback to Trump's plan to add a contentious citizenship question to the 2020 census.

Related: DACA recipients won't go back into the shadows quietly

The DACA program has remained in effect despite Trump's efforts to rescind it, part of his hard-line immigration policies that have become a prominent feature of his presidency and his 2020 re-election campaign. Trump has backed limits on legal and illegal immigration and has sought construction of a wall along the US-Mexican border since taking office in January 2017.

The legal question before the Supreme Court is whether the administration properly followed a federal law called the Administrative Procedure Act in Trump's plan to end DACA.

Three federal district court judges issued orders halting Trump's move to end DACA in lawsuits challenging the move filed by a group of states, people protected by the program, rights groups and others. The Trump administration has argued that Obama exceeded his constitutional powers when he bypassed Congress and created the program.

Trump announced his decision to rescind DACA in September 2017, planning for the Dreamers' protections to begin phasing out in March 2018. But courts in California, New York and the District of Columbia directed the administration to continue processing renewals of existing DACA applications while the litigation over the legality of Trump's action was resolved.

Obama created DACA by executive action in 2012 as what he called "a temporary stop-gap measure" after the failure in Congress of bipartisan legislation called the Dream Act that would have provided a path to citizenship to young immigrants brought by their parents illegally into the country as children, sometimes as infants.

When he created the DACA, Obama said that the people it protected were raised and educated in the United States, grew up as Americans in their hearts and minds, and may known little about their countries of origin. Under DACA, those eligible are protected from deportation and given work permits for two-year periods, after which they must re-apply.

The Trump administration said Trump possesses the authority to end a program implemented by a previous president, acted lawfully in seeking to rescind it and that courts should have no say in the matter.

Lawsuits challenging Trump's action were filed in various courts by a group of states including California and New York, individual DACA recipients, the University of California, civil rights groups, labor unions and Microsoft Corp, which expressed concern its own employees would be affected.

The administration has sought to bypass the normal court process, filing papers on Nov. 5 asking the high court to intervene even before some federal appeals courts considering the matter had issued rulings.

Since then, on Nov. 8, the San Francisco-based 9th US Circuit Court of Appeals upheld District Judge William Alsup's January 2018 ruling against Trump, saying the challengers provided evidence of "discriminatory motivation, including the rescission order's disparate impact on Latinos and persons of Mexican heritage."

The justices could have acted on the Trump administration appeals as early as January but did not do so, with no reason given for the delay. During that time, another appeals court, the Richmond, Virginia-based 4th US Circuit Court of Appeals, ruled against the administration. Two federal appeals court are still yet to issue rulings.

During the Supreme Court's inaction, Trump and Congress have made no progress toward reaching a deal to safeguard DACA recipients even as Democratic presidential candidates including front-runner Joe Biden pledge actions to protect the Dreamers and offer them citizenship.

The Supreme Court in February 2018 rejected an earlier Trump administration appeal in the California case.