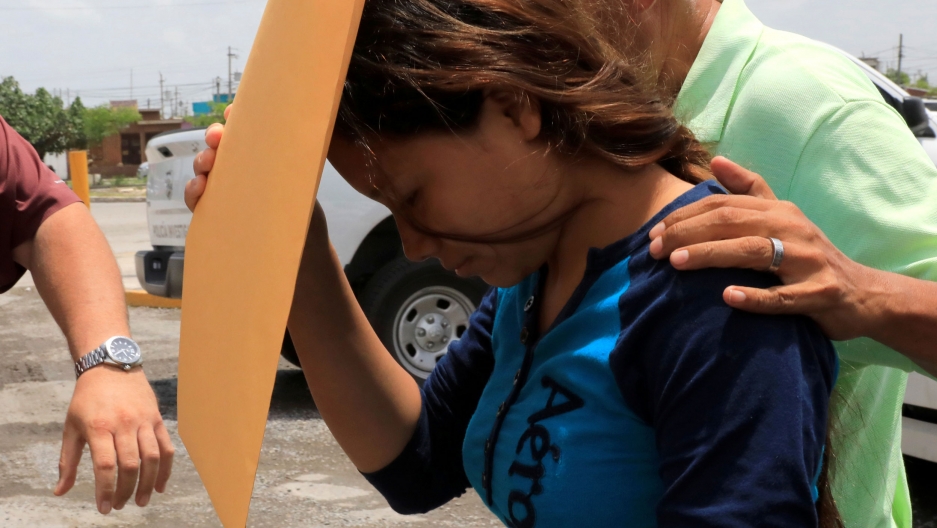 Tania Avalos, wife of Oscar Alberto Martinez Ramírez, a migrant who drowned in the Rio Grande river with his daughter Valeria during their journey to the US, is seen outside the morgue in Matamoros, Mexico, June 26, 2019.

A single photo taken this week showcases the power of images to focus the world's attention on the migrant crisis at the US-Mexico border.

Oscar Alberto Martinez Ramírez and his 23-month-old daughter Valeria tried Sunday to cross the Rio Grande river. But they never made it to safety.

The image of the pair’s lifeless bodies lying facedown in the river’s muddy waters spread across the world on Tuesday night. Her arm was still wrapped around his neck.

The photo from the US-Mexico border was eerily similar to another image from 2015 that depicted Alan Kurdi, the drowned Syrian toddler whose tiny body washed ashore a Turkish beach after his family’s failed attempt to reach Europe by boat.

Related: How social media transformed the image of drowned Syrian child into an iconic symbol

The photo, taken by Julia Le Duc, was published by Mexican newspaper La Jornada. According to the Associated Press, Martínez swam across the river Sunday with his daughter and set her on the US side of the river, then turned back to help his wife, Tania Vanessa Ávalos, get across. But Valeria threw herself back in the river as she watched her father go back. Martínez managed to reach her, but they were swept away by the current. Their bodies were discovered Monday morning.

The photo has been published by dozens of news organizations. Several media commentators and politicians drew a comparison between Le Duc’s image and the earlier one of Kurdi.

“It’s very hard to see that photograph,” said Rep. Joaquin Castro of Texas. “It’s our version of the Syrian photograph — of the 3-year-old boy on the beach, dead. That’s what it is.’’

Absolutely heartbreaking. Families are fleeing desperate conditions to find refuge, only for the doors to be shut in their face. We need a more sensible, compassionate immigration system that doesn’t criminalize desperation.https://t.co/wuDsnOewZS

Trump is responsible for these deaths. https://t.co/UZirFjh3fm

These kinds of photos speak volumes about the human costs of irregular migration and the lengths the United States and other powerful nations will go to deter people from arriving. They’re uncomfortable to see. But they move audiences in a way that few stories or reports can on their own.

“You get numb to it, but when you see something like this it re-sensitizes you,” journalist Le Duc told the Guardian. “You could see that the father had put her inside his T-shirt so the current wouldn’t pull her away. He died trying to save his daughter’s life.”

“Will it change anything? It should,” Le Duc said. “These families have nothing, and they are risking everything for a better life. If scenes like this don’t make us think again — if they don’t move our decision-makers — then our society is in a bad way.”

So what impact can these images actually have? The answer is a lot, for a short period of time — and then not much.

In Alan Kurdi’s case, the image brought unprecedented attention to the plight of Syrians trying to escape a devastating conflict already in its fifth year by the time Turkish photographer Nilüfer Demir took his photo. It prompted record donations to humanitarian organizations worldwide.

But the outpouring was short-lived, according to a 2016 study on the impact of that iconic photograph. The week after Kurdi’s photo was published, the mean amount of daily donations to a Swedish Red Cross campaign for Syrian refugees rose 55-fold. But within six weeks, donations had leveled off significantly, and a year later they were back to normal levels. The study also found a huge spike in Google search images on Syria, which subsided a few weeks later.

Public interest and outrage in the aftermath of a devastating photo is valuable in getting people to act and care, says Paul Slovic, a University of Oregon psychology professor who coauthored the study. He pointed to the "Napalm Girl" photo in the Vietnam War and 9/11 image of the "Falling Man" beside the World Trade Center.

But it’s often not enough to create a tipping point for policy change.

“The photo galvanized people in a way that the information by itself failed to do...There's a window of opportunity, but it doesn't last forever.”

“The photo galvanized people in a way that the information by itself failed to do,” Slovic says of the Alan Kurdi image. “Similarly, with this photo, it’ll certainly cause a spike in interest where people want to do something. There’s a window of opportunity, but it doesn’t last forever. It will dampen over time.”

“So this is the time to act, as individuals and as a government,” he adds.

Slovic studies what he calls the “arithmetic of compassion,” or the psychological roadblocks and cognitive biases that get in the way of our ability to care about issues such as mass atrocities, famine, genocide and climate change. Those psychological obstacles prevent us from feeling much when we hear statistical reports of hundreds of thousands dead or millions forced to flee from a crisis.

A photo of one individual can stir emotions in a way that statistics and official reports cannot, he said.

Documentary filmmaker and photographer Valentina Pereda, who covers migration and human rights in El Salvador, Honduras, and along the US-Mexico border, says it’s important that images like this can break through and find a viral audience when our attention span is so short these days. But, impact doesn’t last long.

“For us that live in the region, these images aren’t new,” Pereda said. “Photographers have been documenting migrant deaths for decades. You don’t know what will go viral. But the effect is short-lived. It sparks outrage — then once news cycle passes it fades.”

She points to photos last year of a border agent tear gassing children — and the children running away from the gas.

“It pissed people off for only a week or two,” Pereda said.

Pereda has witnessed and photographed murder scenes resulting from gang violence in El Salvador and Honduras. She said she considers the ethics of taking photographs of violence and death before snapping an image — and has taken photographs like Le Duc’s.

She remembers covering a murder by the MS-13 gang. At the funeral, she said, many young people mourned the death. She takes these photos, she said, because she hopes they can resonate with people.

“You feel outrage. But why does society keep failing the most innocent of people? In the short term, it does make a difference. But you become jaded,” she says. “I have a mix of cynicism — but you want to keep pushing forward. I’m still cautiously optimistic.”