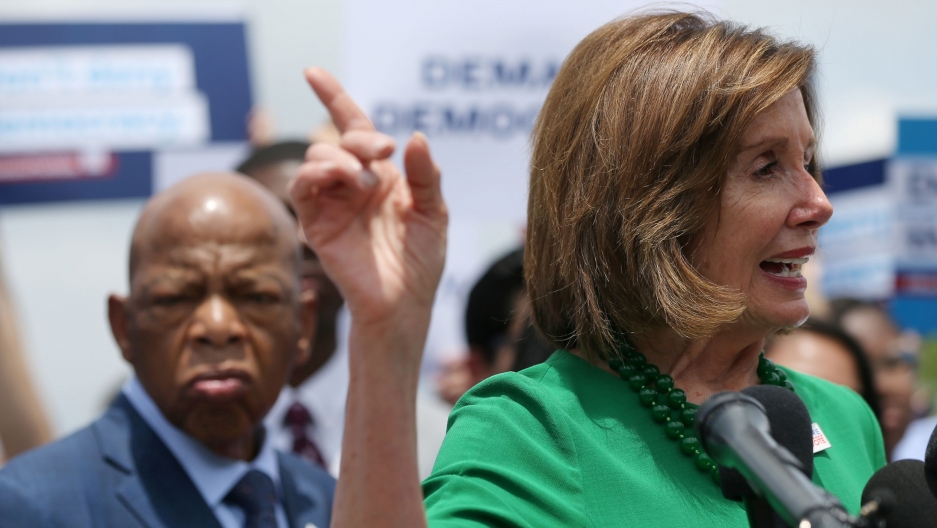 US House Speaker Nancy Pelosi speaks at a news conference held by Democrats outside of the US Capitol Building in Washington, DC, June 25, 2019.

The Democratic-led US House Representatives on Tuesday approved a $4.5 billion aid package to address the migrant surge along the US-Mexico border.

The vote, 230-195, was mostly along party lines, and the future of the aid package is uncertain. The Republican-run Senate is working on its own version of the bill, and Republican President Donald Trump has vowed to veto the House legislation, with White House officials saying it would hamstring the administration's border enforcement efforts.

Trump on May 1 requested the aid for programs that house, feed, transport and oversee record numbers of Central American families seeking asylum in the United States and straining capacity at migrant shelters in border cities.

Attorneys raised alarms last week after finding more than 300 migrant children in an overcrowded Texas border patrol station, where they said some had been held for weeks in squalid conditions without adequate food and water.

Amid the ensuing outcry, the acting commissioner of the US Customs and Border Protection (CBP) agency, John Sanders, said on Tuesday he was resigning.

Democrats emphasized on Tuesday that while they were approving the border aid to address the humanitarian crisis, they were not ratifying the administration's attempts to restrict and discourage immigration, which Trump has made a central focus of his presidency.

"Our legislation is a vote against the cruel attitude toward children of this administration. This bill does not fund the administration's failed mass detention policy. Instead it funds effective humane alternatives to detention that have a proven record of success," House Speaker Nancy Pelosi said ahead of the vote.

But Democratic leaders had to work to secure votes for the bill from progressive lawmakers worried the Trump administration might use the funds for other purposes, such as deportation of migrants.

On Tuesday afternoon, Democrats added provisions to better protect the health of migrants in the custody of US Border Patrol agents, including standards for medical care and nutrition. They also added language to set a three-month limit for any unaccompanied child migrant to spend at an intake shelter unless notice is given.

Another amendment said shelters run by contractors must meet standards of care within six months or risk losing their contracts. Representative Pramila Jayapal, the co-chair of the Congressional Progressive Caucus, agreed to back the bill after that provision was included.

The House legislation would also reinstate hundreds of millions of dollars in aid to El Salvador, Guatemala and Honduras that was cut off by the Trump administration.

The same provisions that helped win over progressive Democrats were denounced by House Republicans as "poison pills." Republicans said they preferred the $4.6 billion Senate version of the bill, which has passed a committee on a bipartisan basis, and includes money — left out by the House — to pay overtime for Immigration and Customs Enforcement employees.

The House bill is a sham that "does not help our overstretched law enforcement authorities," said House Republican leader Kevin McCarthy.

With administration officials warning they will soon run out of funds at the border, and a one-week congressional recess coming up next week, House Democrats hurried to pass the measure on Tuesday. But the Senate has yet to pass its version, and the two chambers must agree on the same legislation before it is sent to Trump.