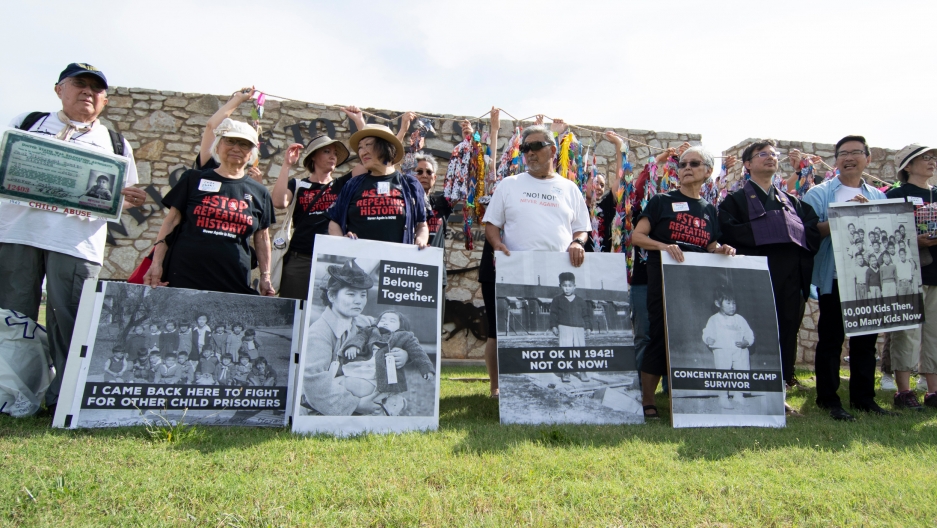 A group of Japanese Americans who were incarcerated in camps during World War II pose with photos of themselves during a press conference on June 22, 2019, at Fort Sill in Lawton, Oklahoma. The US government plans to house 1,400 migrant children at the military base this summer.

Minority groups gathered Saturday at Fort Sill in Lawton, Oklahoma, to protest plans to house more than 1,400 migrant children there later this summer.

But for many among the 200-some that gathered last week, Fort Sill has a history of incarcerating minority groups. The site was used in the 1860s and 70s to jail Native Americans — notably Geronimo — and served as an internment camp for 700 Japanese Americans during World War II.

The group has plans for more demonstrations.

"We as minorities need to come together and realize that we all share almost the exact same history when it comes to the United States government and the military," says Mary Topaum, the director of the American Indian Movement Indian Territory in Lawton.

Topaum spoke to The World's Marco Werman about the demonstration.

"The protest was organized by a group called 'Tsuru for Solidarity,' which was the Japanese Americans group," she says. "They reached out to us, the American Indian Movement (AIM) Indian Territory [chapter] because they were aware that we have been going through this for over 500 years and they wanted to make sure they weren't offending anyone by coming here. We partnered up with them to continue helping them get things in order for the protest."

Marco Werman: Are these protests ongoing?

Yes, it is. I believe there is another one that is supposed to be happening here on July 12 and then throughout the United States, they are holding protests out there.

For someone who's never heard of Fort Sill in Oklahoma, what is the significance of this place to both the Indigenous community, the Japanese community, really everyone who's shown up?

Fort Sill is a military base that is here in Lawton, Oklahoma. It was also made the prisoner of war camp to the Apaches and where Geronimo was eventually imprisoned and died and is buried there, along with other members of his band. So the military base alone captured our own people and made them be in camps there. Some were released and some died there. And then you have the Indian boarding school where a lot of Native American children were made to go to school there. That's the significance of it for the Native American community.

There were also demonstrators from Black Lives Matter there. I get the sense of enormous unity. Since you've been a director at AIM, was this protest the first time that you've seen this kind of unity with Japanese, Black Lives Matter, Indigenous and migrant communities all coming together?

I think it's going to show that we as a community will not allow abuse and mistreatment of the migrant communities. We're showing them that we're not going to allow history to repeat itself.