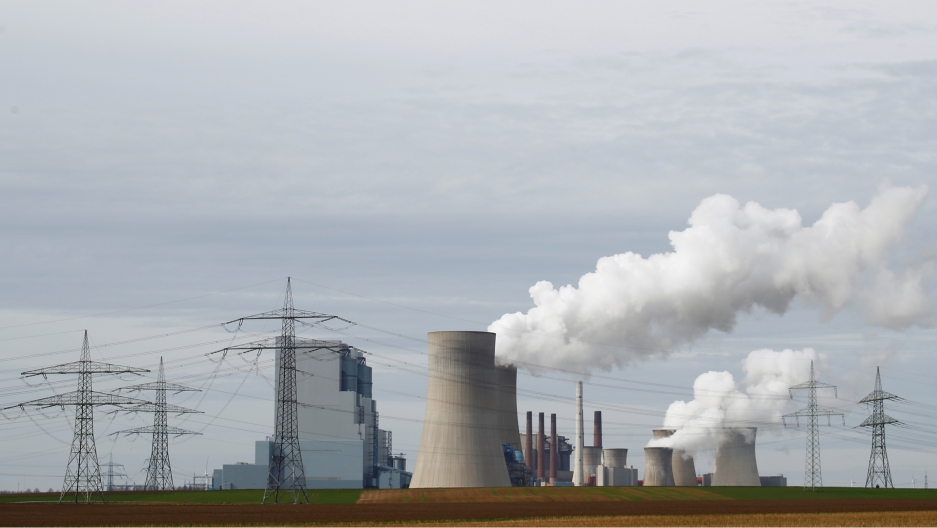 Steam rises from the five brown coal-fired power units of RWE, one of Europe's biggest electricity companies in Neurath, northwest of Cologne, Germany, on March 12, 2019. Germany and the UK are two countries where subsidies are actually going to phasing out coal, a new report found.

Ten years ago, the G20 group of top economies pledged to phase out fossil fuel subsidies to help fight the climate crisis.

But as G20 leaders prepare to meet in Japan on Friday, a new study finds that coal subsidies by members are rising, not falling. In fact, they've tripled.

Marco Werman: Clearly the G20 countries as a whole have not yet made good on that promise to phase out coal subsidies. What did your study find?

Ipek Gençsü: Yes, unfortunately, you're right. They have not. Our study actually found $64 billion dollars of support per year being provided to coal, both the production of coal and its consumption. We also found — which was especially alarming — that subsidies to coal-fired power have increased if you compare them with data we found in 2013-14. So within a three-year period, they've gone up from $17 billion dollars per year up to almost triple, at $47 billion dollars per year.

Related: How a forest became Germany's poster child for a coal exit

Yeah, it is pretty astounding. Which countries are providing the highest level of subsidies, or at least highest relative to their GDP? Where does the US fit into all of that?

So, we actually caution against doing so many comparisons because, obviously, we know these countries are at different stages of their development. They have different energy needs but, of course, as you might expect, we do find China, India, Japan, some of the largest economies providing the highest levels of subsidies. The US and the UK come next and the US is actually providing some of the highest levels of subsidies for coal production. The UK, on the other hand, is providing support to close up mining sites and paying off inherited liabilities. So, as I mentioned, countries are at different stages of their development and, moreover, we don't actually know the full figure because a lot of subsidies are hidden.

Which may make this next question a little difficult to answer. Are all these subsidies to domestic coal plants or do they include investment in plants beyond the country's own borders?

They are for both. So, not only are they making these decisions domestically to continue a coal-based energy system, but they are locking in other countries who are at earlier stages of their development to a sort of dirty, outdated energy system.

Why this stubbornly high, continued investment in coal given first the rapidly escalating impacts of the climate crisis on one hand and also the rapidly falling costs of renewable and other low-carbon alternatives on the other hand?

It's hard to believe, isn't it? Our research didn't actually look into the reasons behind this ongoing support, but we do expect it's partly due to the pressure coming from the coal sector and those involved. But we also partly expect it's because governments are taking over the responsibility when other investors are pulling out of these sectors. So, we do understand that this sector needs support in the transition away and it does take leadership for governments to move away from this energy source. So, governments just have to put any remaining resources that they have into a just transition for the workers and communities in this sector and make sure that they move away as soon as possible.

Related: Britain is giving up coal. Why can't the US?

Let me just switch to this weekend's G20 meeting itself in Osaka. There are reports that Japan is watering down language on fighting climate change in the joint document at the end in order to appease the US, which as we know under Trump has moved sharply away from taking action on the climate crisis. If the G20 does come out of this meeting without a strong statement on fighting the climate crisis, what will that mean for the global effort to get serious about climate change?

The messages that come out of these G20 leaders' gatherings are important because they provide signals for businesses, investors, numerous other stakeholders. So, we all know that the world is moving away from fossil fuels. Renewables are doing incredibly well. So governments not putting their weight behind climate action sufficiently is simply delaying the transition, which will just make it more dangerous for the planet and more costly for businesses to actually make the switch in the coming years.