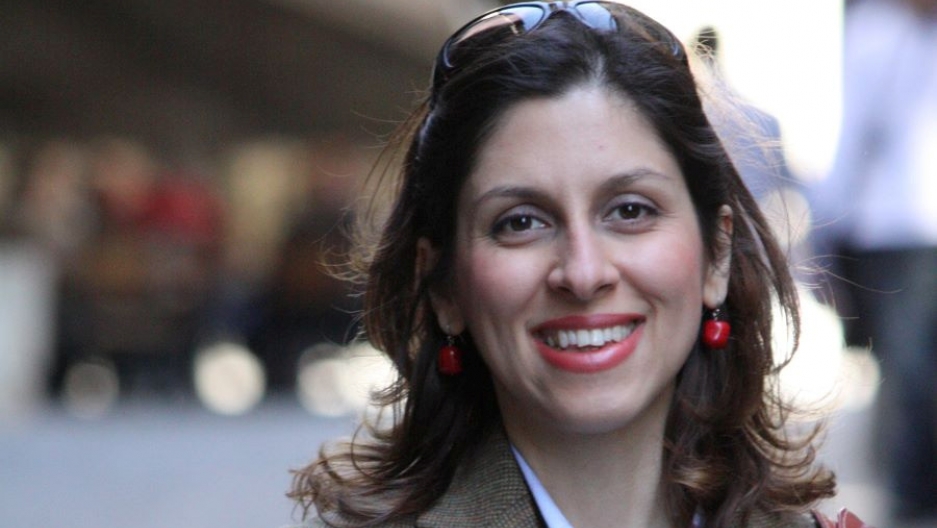 Richard Ratcliffe sits on a folding chair outside the Iranian embassy in a wealthy suburb of southwest London. His eyes are bloodshot. Ten days without food is beginning to take its toll.

“I think the last couple of days I’ve felt the effects more and more, so I mean, I’m sort of tired, slower thinking, slower responding, slower moving, if I’m being honest,” he says. 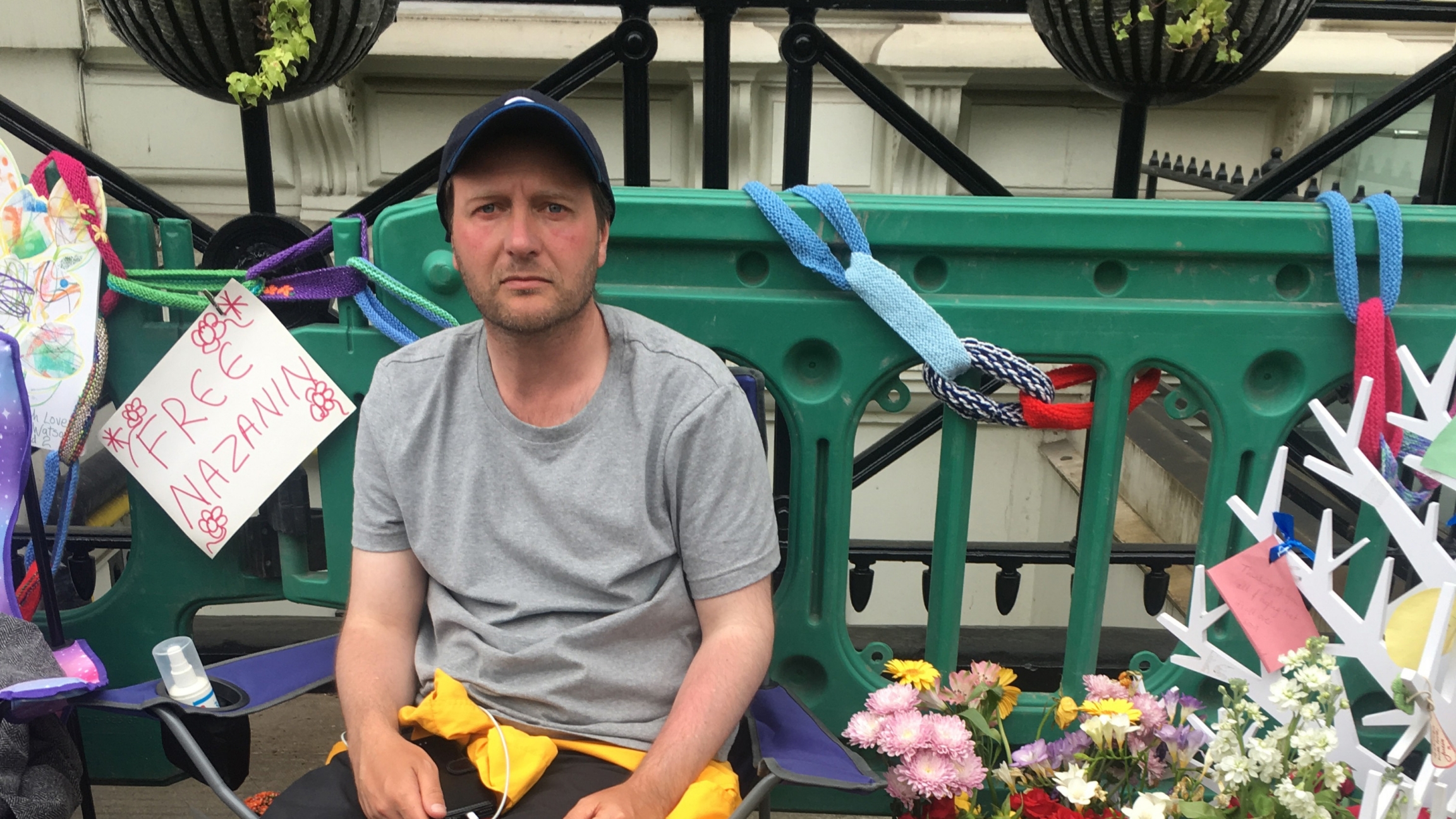 Richard Ratcliffe sits outside the Iranian embassy in London on June 24, 2018. This is the 10th day of his hunger strike.

She has been in custody for more than three years in Iran's notorious Evin prison. She has always denied the charges.

Both Ratcliffes are conducting coordinated hunger strikes — she from her prison cell in Tehran, and he from outside the Iranian embassy in London.

The embassy is not happy he’s there.

“I don’t think I expected the level of hostility from the Iranian embassy,” he says. “Perhaps [it’s] not surprising but I didn’t expect them to erect a wall, to try and drive us off the street, to call the police, to spray the fence and all the rest of it.”

Meet Richard Ratcliffe. In 2016 his wife Nazanin & 18 month old girl were leaving Iran. But instead were taken hostage & charged with spying. Richard is currently on a hunger strike in front of Iran’s UK embassy. Here’s Iran building a tin wall so they don’t see Richard. 🤦‍♀️ pic.twitter.com/OSmbuFv1HN

Others support Richard Ratcliffe’s protest. Police have been friendly, and his mother is there to watch over him in case he becomes ill.

“I feel very proud of him,” Barbara Ratcliffe says. “[I’m] overawed by the support he’s getting and we’re getting, but equally as worried about his health.”

Other supporters of the protest include Monique Villa, who was a colleague of Zaghari-Ratcliffe's at the Thomson Reuters Foundation before she was arrested. Villa says she’s worried about what the hunger strike will do to Zaghari-Ratcliffe’s health. 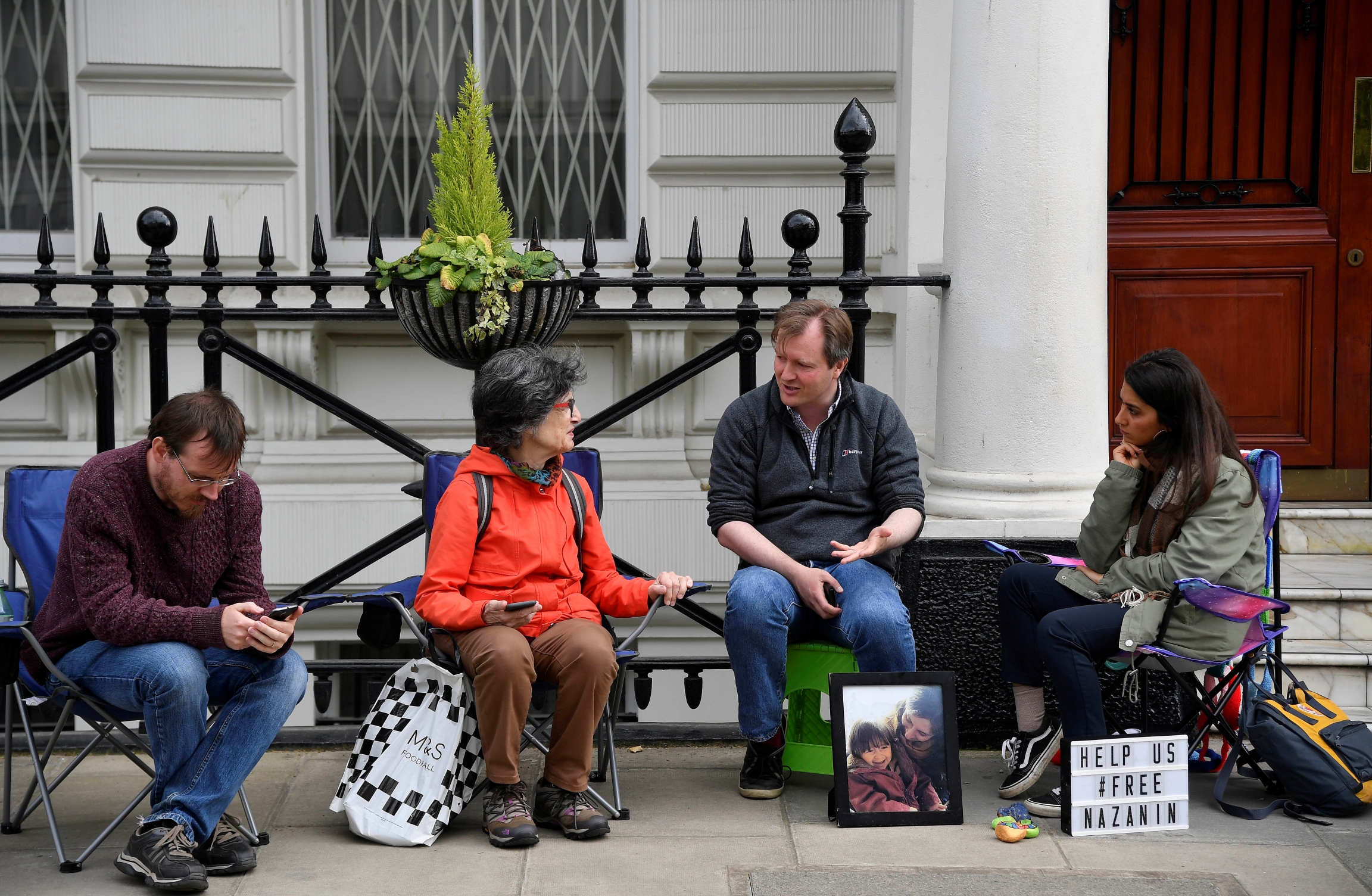 Richard Ratcliffe, the husband of jailed British-Iranian aid worker Nazanin Zaghari-Ratcliffe, speaks with supporters as he stages a vigil and goes on hunger strike outside of the Iranian embassy in London, Britain, on June 15, 2019.

“Her body is already very weak,” she says. “Her mental health is already weak.”

Villa says she was shocked when the arrest took place in 2016.

“It was the first time she was going to Iran, and she was with her baby,” Villa says. “If you’re a spy, you don’t go with your toddler to see your parents and then leave. I was absolutely convinced she’s not spy material.”

June 11 was their daughter's fifth birthday. Gabriela was nearly 2 years old when her mother was arrested. Zaghari-Ratcliffe had promised she would go on a hunger strike on her daughter’s fifth birthday.

Iran's foreign ministry spokesman dismissed a call for her release on Monday by a British minister visiting Tehran and said she would serve her entire five-year sentence.

"Mrs. Zaghari is an Iranian. She has been convicted on security charges and is spending her sentence in prison," Iranian Foreign Ministry Spokesman, Abbas Mousavi, told Iranian state media. "Iran does not recognize dual nationality."

UK Foreign Office minister Andrew Murrison pressed Iran for the "urgent and unconditional release" of Zaghari-Ratcliffe on Sunday, during a visit to Iran to discuss the situation in the Middle East.

British foreign secretary Jeremy Hunt, who is running to become Britain’s next prime minister, has also appealed to the Iranian authorities to free Nazanin Zaghari-Ratcliffe.

Running against Hunt and the favorite to become prime minister is Boris Johnson.  Johnson has been widely criticized for his comments on the case, when as foreign secretary he mistakenly said Zaghari-Ratcliffe had been involved in training journalists.

Johnson retracted the statement, but supporters say they were used in Iran to wage a propaganda campaign against Zaghari-Ratcliffe.

“I’m not going to push her to keep going longer than she wants to. ... My job is to support her."

Ratcliffe says he’ll ask to meet the next prime minister to discuss his wife's case. And he says the hunger strike will continue as long as his wife wants to keep going.

“I’m not going to push her to keep going longer than she wants to,” Ratcliffe says. “It’s tough going and at some point, it will become more dangerous the longer it goes on for. She will decide when she feels she’s made the point. My job is to support her.”