Aurora Morena Sierra was raped by a fighter with the FARC 22 years ago, and the assault resulted in pregnancy. Now, she and thousands of Colombian women are fighting for justice for themselves — and for their children.

Aurora Morena Sierra tried to forget what happened to her, but she always had two reminders of the days she was raped: a jagged scar running along her throat and her daughter.

Sierra was 16 years old, living in Meta, a small town in the jungle when a 46-year-old fighter from a guerrilla group, the FARC, began to prey upon her.

During Colombia’s more than half-century civil war, the FARC dominated this region while locked in a violent territorial conflict with the Colombian military and paramilitary groups.

One day, as Sierra walked from school to play basketball with other children, a share-taxi rolled up and she got in, thinking she could catch a ride to practice. The FARC fighter was inside and kidnapped her. He took her under a bridge and threw her to the ground. Then he held a white knife to her throat — her starkest memory of that day.

“Being poor makes you take preventative measures to defend yourself from everyone. So I tried to hit him hard. … But with the knife, he got me here. ... I obviously tried to fight him with everything. I knew what he was doing. I’d never had sex before.”

“Being poor makes you take preventative measures to defend yourself from everyone. So I tried to hit him hard. … But with the knife, he got me here,” she said, running a finger across the white scar on her jawline. “I obviously tried to fight him with everything. I knew what he was doing. I’d never had sex before.”

Afterward, she fled the town in fear. Two months later, Sierra learned she was pregnant and the father was her rapist.

“I was forced to be a child who fights,” she said, now 38. “I was faced with a situation that I wasn't prepared for. I don't think anyone at 16 is prepared for that.”

Twenty years later, Sierra is one of nearly 28,000 victims who were sexually abused during the Colombian armed conflict and who are part of a growing movement of women who want their children, too, to be recognized as victims and receive justice.

In May, a network of Colombian organizations  — led by the National Table for Victim's Participation — representing survivors like Sierra, brought forth a list of demands to the Colombian government. They called for the government to pay monetary reparations — compensation for war damages — to both sexual abuse survivors and children born as results of the abuse.

Survivors say they and their children often face prolonged trauma, including long-term financial hardship and poverty, psychological turmoil and stigmatization for being born out of rape by armed groups.

“These mothers, they're brave, because to have a child from that rape is to remember what happened to them."

“These mothers, they're brave, because to have a child from that rape is to remember what happened to them,” said Ángela María Escobar, a rape survivor from the war and leader of Colombia’s Network of Women Victims and Professionals. 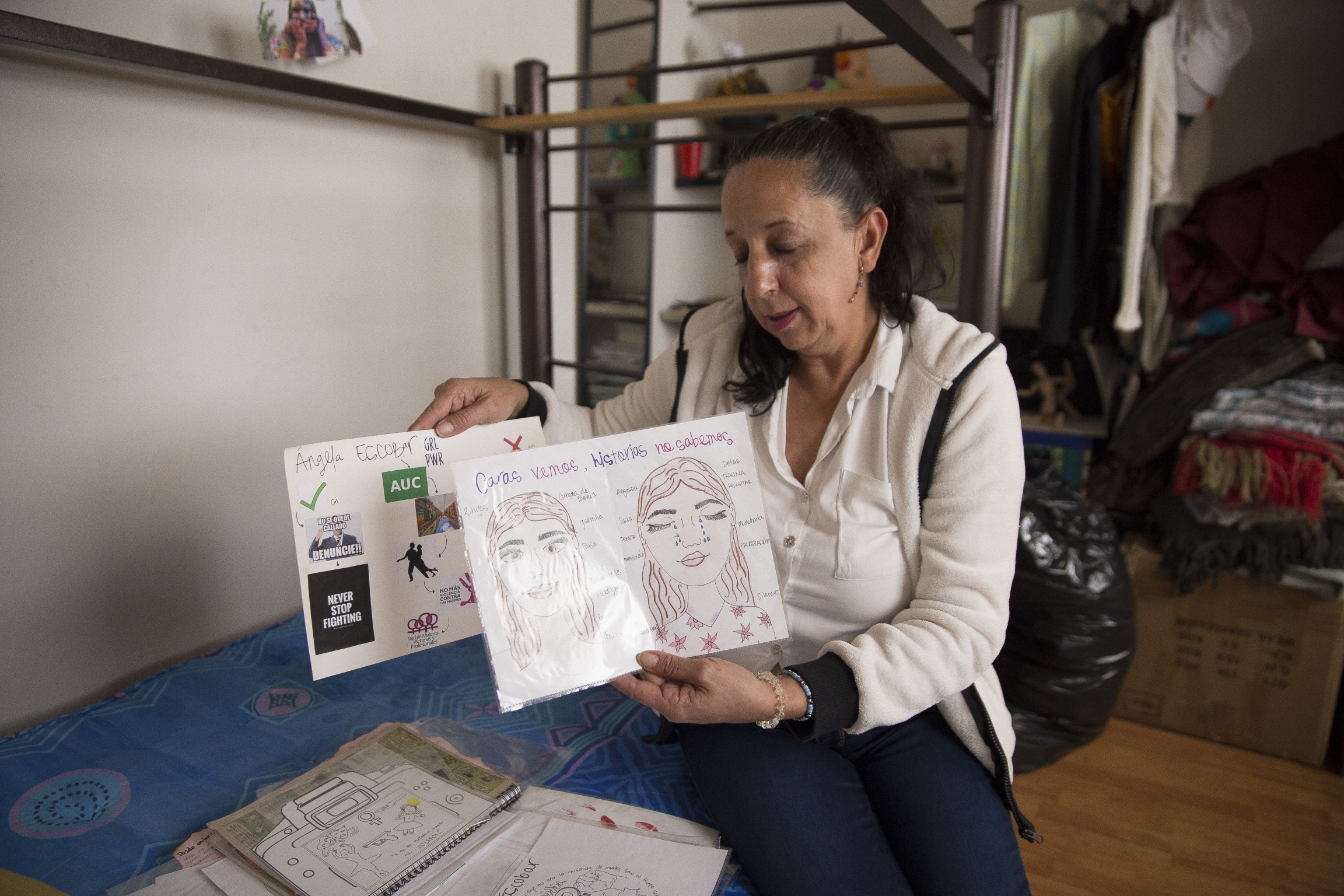 Ángela María Escobar is a rape survivor from the war and leader of Colombia’s Network of Women Victims and Professionals.

“It's a very hard situation, a situation as hard for the mother as it is for the child who one day will ask, ‘Where is my father?’”

A law for victims — and survivors

More than 8.8 million people registered as victims of the armed conflict before the government of former President Juan Manuel Santos and FARC guerrillas signed peace accords in 2016.

The idea of reparations dates back to 2011 when Santos created The Victims’ Law, which provided a variety of different kinds of reparations, including the return of stolen land, economic reparations and providing services like education, healthcare and professional training.

The 2016 peace pact built upon that law and was once hailed for its focus on victims, especially vulnerable populations like survivors of sexual assault, because reparations featured prominently in the agreement.

The peace accords led to the creation of the Special Jurisdiction for Peace (JEP), a transitional justice court where victims can tell their stories and have their cases investigated. But the court would only provide general “symbolic reparations” geared toward social progress. It also offers reduced sentences and alternative punishments to perpetrators.

Escobar and other activists want more than symbolic justice, they want to be individually acknowledged and receive full economic reparations for the children and their mothers.

“We want [the children of rape survivors] to be recognized as a subject of reparations. ... When you're recognizing the sexual abuse of the mother, it should also apply to the child.”

“We want them to be recognized as a subject of reparations,” said Yolanda Perea Mosquera, an activist leading the movement.  “When you're recognizing the sexual abuse of the mother, it should also apply to the child.”

But promises of the Victim’s Law have largely fallen flat.

Since the Colombian government enacted the law, they have only paid reparations to less than 11% of all war victims, or 986,971 people, according to Colombia’s Victims Unit in June. About 7,490 women survivors of sexual violence — less than .1% of all war victims — thus far have been provided reparations, according to Ramón Rodríguez, national director of the Unit for Reparation to Victims.

In the country’s struggle to consolidate peace, women are often disproportionately ignored. According to a 2018 report by the Kroc Institute for International Peace Studies, facets of the peace accords centered on gender have been less implemented than any other: Of the 578 provisions of the agreement, only 130 have a gender focus and include things like leadership and development of women and LGBTQ populations. Only 4% of those provisions have been fully implemented, according to the report.

At the same time, it’s those women who are disproportionately affected during the conflict. Armed groups would use sexual, psychological and physical violence to target and “dehumanize” women as a war strategy in order to attack her community, according to the Inter-American Commission on Human Rights.

“Our bodies were used in the war to spread terror,” Escobar said.

A lifetime of consequences

Terrified to see her rapist every day, Sierra dropped out of school and fled with her daughter, Karen, to Villavicencio, a city in the Meta area. They lived alone and in poverty, and 16-year-old Sierra hoped to find someone who could be the father to Karen.

In the coming months, she entered a relationship and says that without birth control in such a rural area, she became pregnant once again. She was slowly recovering until a paramilitary militia gang burst into their home at 2 a.m. and killed her partner, the man Karen saw as her father. Alone, she raised two children without government assistance, barely able to buy a pound of meat to feed them.

One year ago, Sierra told her daughter, then 21 years old, the truth about her father —something she had dreaded her entire life — and together they requested that they both be recognized as victims through the law. Today, they, along with at least 30 other mothers are working with victims organizations, hoping to receive reparations from the Colombian government.

Sierra said it would help pay for her daughter’s education, the thing she herself was forced to abandon after her rape.

Leaders of the movement and Colombia’s Victim’s Unit say it’s nearly impossible to know how many children have been born to rape, though Escobar estimates the number to be in the thousands.

“Many mothers have not declared or have not been recognized as victims. ... In many cases, we say it’s because of shame or fear.”

“Many mothers have not declared or have not been recognized as victims,” said Juan Carlos Monroy, of the Victim’s Unit. “In many cases, we say it’s because of shame or fear.”

That was the case for Eucarys, whose last name is being withheld due to fear of retribution. 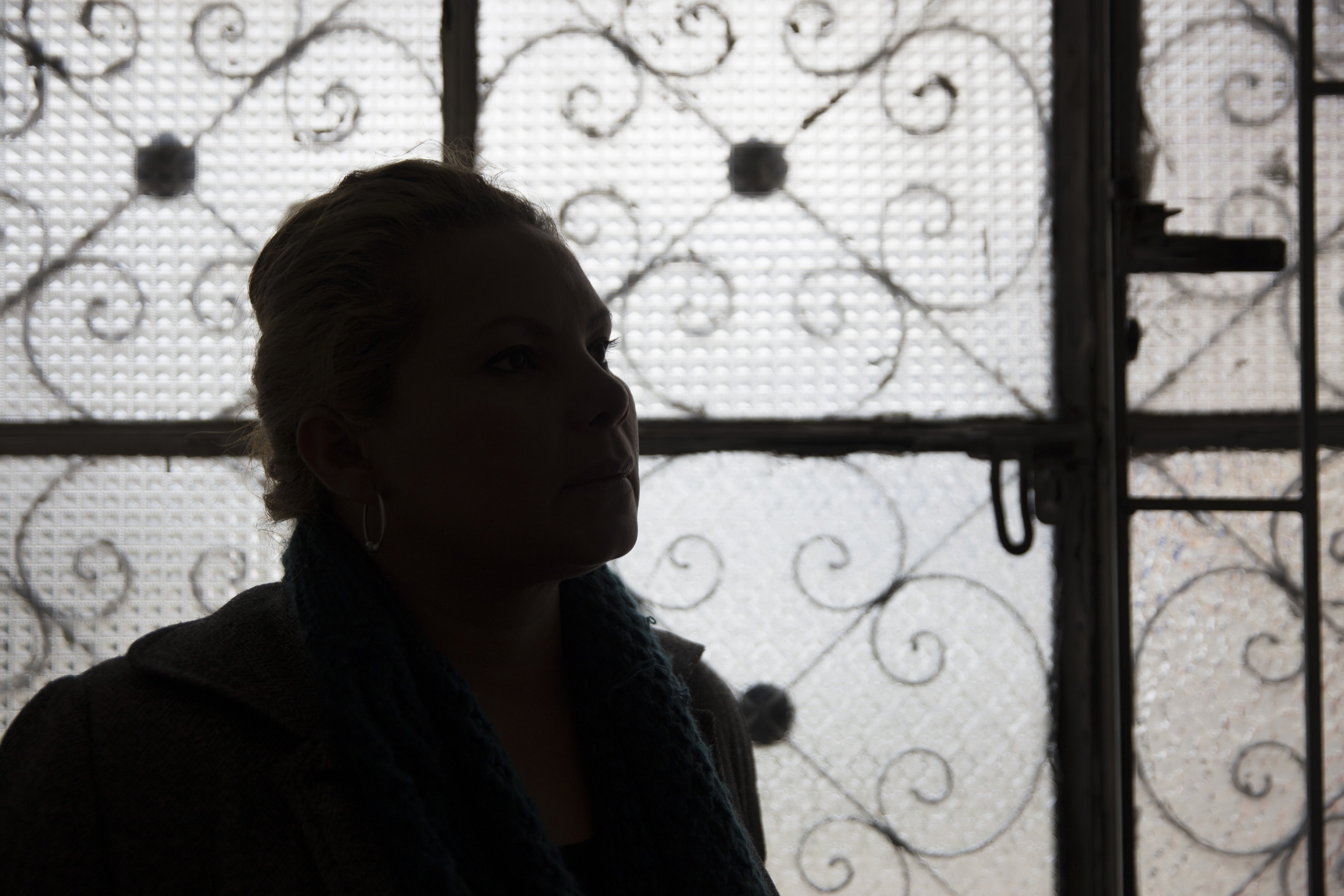 Eucarys, who didn't want her last name used, was raped and threatened. She hasn't told her son that his father wasthe leader of a paramilitary gang who raped her.

At 18 she says she was raped one night coming home from work by the leader of a paramilitary gang who had been hunting money from her uncle.

Before leaving her alone on the street, he threatened her.

“He said, ‘If you say something, we'll return and do the same thing, and this time we'll kill you,’” Eucarys recalled, fighting tears. “‘We'll leave you for your head to be filled with flies. We'll kill you, your children and your family.’"

So Eucarys told nobody. Not her mother, not her friends, not her son, who begged her for 20 years of his life to tell him who his father was. She said her son carried a burning anger that Eucarys had kept him from his father, but she, too, carried emotional turmoil and a deep sense of loneliness.

Eventually, she lied, telling her son that his father was a different man.

Since her rape, she said she’s tried to take her life twice. She’s never been comfortable enough to have another partner.

Now, as she considers joining the growing group of women calling for reparations, she says she’s terrified of two things: First, that her rapist will make good on his promise. And second, that her son, instead of joining her, will hate her for what she’s told him.

But despite the trauma in their past and the fear ahead, Sierra and Eucarys hold themselves proudly. Sierra says today she prefers the word “heroine” to “victim."