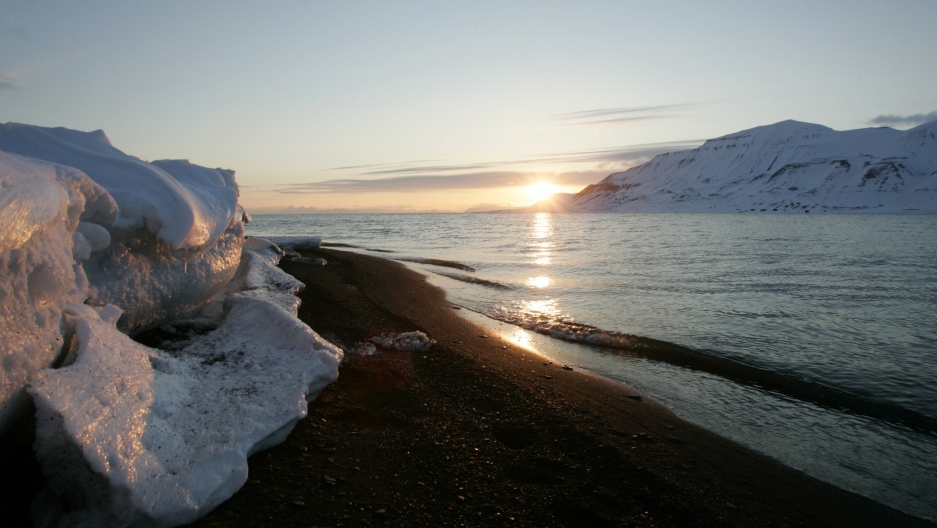 The sun shines low in the sky just after midnight over a coastline near the Norwegian Arctic town of Longyearbyen. The water is usually frozen solid, but climate change has impacted the area.

Climate change, loss of species and more severe natural disasters. These topics have all been at the forefront of the environmental crisis. As we learn more and more about how humans are impacting the climate, some people are starting to experience increased anxiety.

Ashley Cunsolo is a public health researcher and director of the Labrador Institute of Memorial University in Happy Valley-Goose Bay, in the Canadian province of Newfoundland and Labrador. She explained to The World's Carol Hills this phenomenon that she calls "ecological grief" and how it links climate change to research on mental health.

Carol Hills: Ashley, we've just heard Joee Patterson express that she's struggling to deal emotionally with what she calls "the chaos that's being experienced all over the planet right now." You have a term for that — you call it ecological grief. What do you mean by that?

Ashlee Cunsolo: Ecological grief is the grief, pain, sadness or suffering that people identify as experiencing when they lose a beloved ecosystem, species or place. It's grief that situates us within the environments and within the ecosystems in which we live and which we need for our overall health, our wellness, our cultural identities and our overall mental health.

How is ecological grief expressed?

There's a whole variety of ways that people experience it. Some are from acute impacts. When we're thinking about major events like forest fires, flooding or major storms and hurricanes, it's the immediate grief that people feel or the immediate fear [and] anxiety that they're experiencing when they're at the frontlines of these changes. It's also the grief that then comes after. The sense of loss, the sense of fear and the ongoing impacts to mental health that come from these large events or these rapid events. There's also grief that comes from slow and creeping changes. People that are seeing shifts in environments and ecosystems over months, years or decades and feeling that ongoing sense of pain and suffering of watching a beloved place change.

How does ecological grief differ from other types of grief?

Ecological grief is a very different form of grieving in some ways because many people have described it as a grief without end. Right now we're living in such a chaotic world of loss. Some people have identified it as the sixth mass extinction. We know there's climate change, there's biodiversity loss, weather shifts and things that impact us on a daily basis, but also things that are going to impact our planet and the health and well-being of many species moving forward. In some ways its very similar to other forms of grief because it can be very isolating and debilitating, but simultaneously it can also be something where we find comfort in others and in community. Another important difference about ecological grief is we don't have rituals to celebrate passing or death of more than humans in the same way that we do with humans.

Yeah, we don't have those similar moments where we mark a loss or a passing and where a community comes together to support the people who have lost.

Where have you witnessed ecological grief and how is it exactly affecting people's mental health?

I began over 10 years ago to work with Inuit in the Nunatsiavut region of northern Labrador and in this region the Inuit have been experiencing changes in climate and environment for decades. This includes loss of sea ice, shifts in species, rapidly warming temperatures and changing access to places that are really important for spiritual and cultural reasons. All of this has led to a rapid shift in culture, livelihoods and people's overall mental health. One of the things that people would discuss is the pain and grief that they were feeling from the loss. Also ... really mourning what it means for future generations.

As you know, mental health is pretty complicated. A lot of people are already prone to depression, anxiety, fear or have specific life circumstances that can tip them toward these things. How do you know that what you're calling ecological grief is a real thing and that it's really these environmental disruptions that are affecting people's mental health?

This is a great question and it's actually one of the most pressing questions in the field right now. One of the ways that we identify it is through people's own self-reporting with experience. Sometimes people who have already present mental health challenges or who know they're susceptible to particular things will be able to identify them and say, "You know, these shifts in climate or this environmental loss that I experienced actually magnified my other experiences with mental health." Other people have been able to say, "I've never experienced this sense of ongoing pain or loss before. I've never felt so much anxiety about the change in the future." So, a lot of it is from people's self-reporting. Other pieces that we know are through more quantitative epidemiological studies that are happening around the world, where people are actually linking things like [an] increase in mental health clinic visits to changes in temperature or increases in suicide rates at the population level per half-degree or degree temperature increases. There are lots of different ways that research is trying to tease these things out because, as you said, it's so complex. Oftentimes what we hear with things like ecological grief is that sometimes people don't know what's affecting them. They feel a number of different things and they have some strong emotions, but they're not really able to put an idea or term to it. Sometimes when they hear about ecological grief they can start to think about environmental things that are impacting them. Now, for some people, that's much more clear because they're at the frontlines or they've experienced something like we discussed previously around wildfires or floods and are very acutely in the trauma moment. For other people with those creeping, slow and gradual changes or even just the knowledge of knowing how things are changing around the world, that's sometimes harder to tease out and harder to figure out about how it's actually impacting their daily lives, their overall sense of self, and their overall mental well-being.

How do you treat ecological grief?

That's another one of the very pressing questions in the field right now and there's a whole variety of mental health professionals that are working on this. The American Psychiatric Association and the American Psychological Association have been really active in the climate change and mental health piece and there are separate groups that have formed around that to talk about what this means for clinical practice, professional practice and therapeutic practice. The big focus is to not only talk about it for what it is and help people name it and start to figure out where some of their pain is coming from, but also to find programming and supports that just support human wellness and resilience in general. Before some of the environmental traumas may happen, the idea is to work with people to not only talk about how the environment impacts mental health but how we can build overall resilience. I think we're seeing a widespread understanding in mental health professions. There's a lot of talk about incorporating climate change in health, both physical and mental, into medical school and nursing school curriculums and also into counseling curriculum. We're seeing a wide uptake and I think it's still a new concept that's still emerging. A lot of research is still needed and we're still trying to figure out what to do in certain areas versus other areas that are very different geographically or culturally.

I was struck by another thing that Joee Patterson said. She said, "I don't even know how to begin protecting myself and my life and my livelihoods from what is already starting to happen." Does starting to understand what you call ecological grief seem to help people, giving a name to something?

It certainly does. Back in 2009, the Lancet Commission, which is a major health commission in the world, released a report where they identified climate change as the biggest public health threat of the 21st century. As we move forward, people are starting to think it might actually be mental health related to climate change that's the biggest public health threat. We are starting to have these conversations, starting to find ways to identify it, starting to name it and starting to find opportunities for people who are struggling to deal with the chaos and how to make sense of it. We are starting to find the language to talk about it, to express it and also to have it taken seriously at the political level, in education systems, in public health and professional health practice. What we're grappling with as humanity at the existential level is really not fully understanding what's actually happening. I think this idea around how do to even begin to grapple with a chaotic world and make sense of it is really where many people are at. I think that as a species we're struggling with what it means. What we're trying to tease out is what's other forms of mental health versus what's climate and environment-related mental health. A lot of them overlap and a lot of them interact and interrelate, and some will magnify and some will actually assist us in building resilience as though their protective factors. The key is to understand that that right now we are living in such a rapid transition and that rapid transition will always have impacts and effects and they will be different and they will be inequitable around the globe. They'll be inequitable in populations, but they are something that is going to be increasingly part of what it means to be human and what it means to be alive right now in this period of rapid transition.