In the basement of an LGBTQ-friendly bar in Istanbul’s Beyoğlu district, lit with blue neon lights, about a dozen transgender women stand in a line. Some clench their fists and some nervously play with their hair or yank their skirt. All of them have professionally styled hair and makeup and wear sequined evening gowns.

“OK, girls, you need to be ready now,” Gozde Bal claps her hands. The 32-year-old has been organizing an annual beauty pageant for trans women in Istanbul for the last several years. “The audience is waiting.”

Beauty pageant contestants nervously wait together in the basement.

In a time of heated discussions about women’s objectification, body positivity and #MeToo, many women around the world might frown upon the tradition of beauty pageants.

But Bal and her fellow trans friends in Istanbul feel differently. Where transphobia plays out on a daily basis, this contest is one night a year in which they get to celebrate their beauty and let off steam in what can be a perilous life.

Related: This trans woman is fighting for LGBTQ rights in Armenia

After last checks in front of the mirror and lipsticks refreshed, the contestants walk one by one up the stairs. Shiny stiletto high heels hit the red carpet. The women walk, showing off to a jury comprised of influential artists and designers from Istanbul’s LGBTQ community.

Two lines of golden-colored rope stanchions separate the pulsating crowd from the beauty pageant contestants. Cameras flash their faces as they perform an unwavering catwalk after months of practice — despite the six-inch high heeled shoes. Guests follow the contestants with their smartphones, capturing shots, and many stop them for selfies.

Bal, the organizer, wearing a black and silver strapless gown, takes the microphone.

“Is everyone having fun tonight?” she asks. Under the blinking neon lights in the smoke-filled room, the crowd of a couple of hundred roars “yes!” 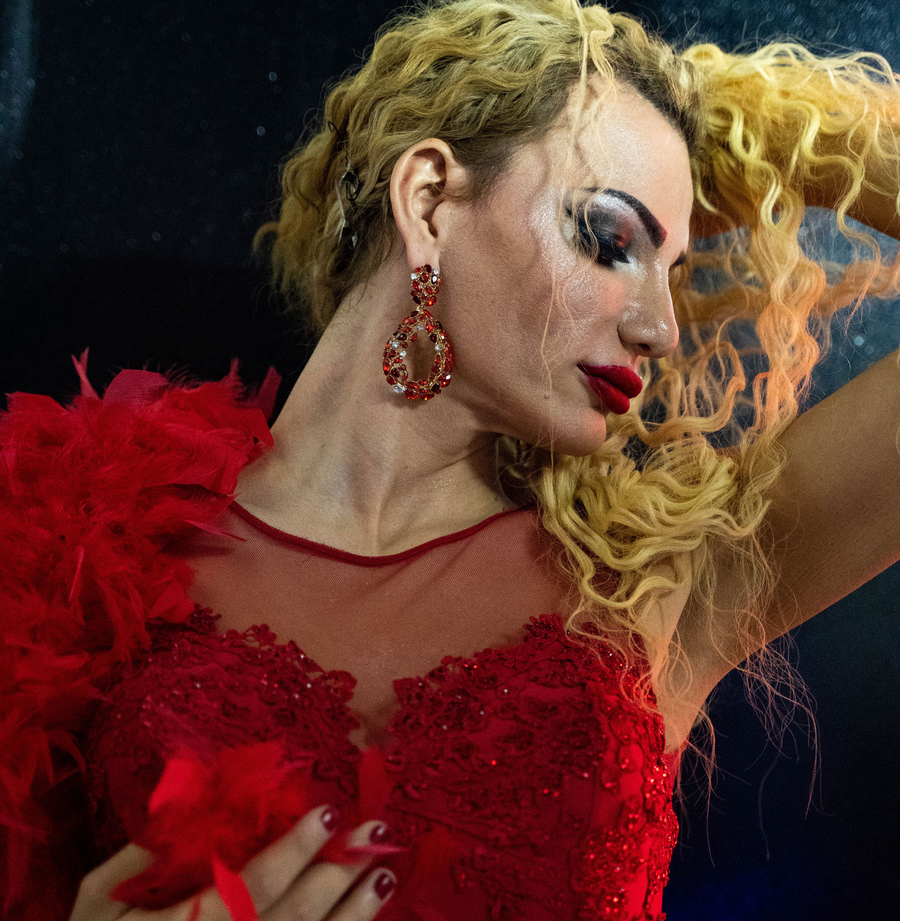 A contestant in the beauty pageant poses for a portrait.

“That’s good,” Bal says. “But while we are having fun, can I also ask everyone to remember Hande Kader for a moment?” Bal goes on to talk about the victims of transphobic hate crimes in Turkey, such as Hande Kader, a young trans woman and a sex worker who was raped and brutally murdered by a client in 2016.

Didem Akay, 25, among the beauty pageant contestants sporting a saxe blue dress with fabric flowers, tenses up at the mention of Hande Kader’s name.

“We did everything together,” she says. “She was a fearless activist. We went to demonstrations to defend our rights. We even stood up in front of water cannon vehicles together.”

“I’ll never get over her death,” Akay adds. “It will always remain a scar.”

Turkey, one of the most transphobic countries in Europe, reported 43 transgender homicides between 2008 and 2016. In comparison, Italy reported 36 trans murders, whereas Spain reported 8.

The Turkish constitution doesn’t include “gender identity” in its article against hate and discrimination. This means the attacks LGBTQ-identifying individuals experience don’t legally fall under a hate crime.

And under a conservative government, many trans people feel the discrimination, risk of violence and marginalization. Between 2015 and 2018, the government banned the gay pride parade, citing security threats from far-right groups.

Due to discrimination in the labor market, a trans person is unlikely to get a job: Local organizations estimate that up to 95% of trans women depend on sex work as their main source of income.

According to Mustafa Sariyilmaz, general coordinator of the Social Politics, Gender Identity and Sexual Orientation Studies Center, or SPoD, a leading LGBTQ rights organization in Turkey, there are many loopholes in the Turkish law that fail to protect trans women.

Trans women, often economically-marginalized sex workers, have next to no legal protection from hate crimes, Sariyilmaz explains. Like Hande Kader, many are murdered by sex work clients.

Furthermore, during Turkey’s rising tide of conservatism, many trans women feel that sex work had become more difficult and dangerous.

“We used to find clients over websites. It gave us some control and allowed us to vet them. But now those websites are censored. ... Now, all we can do to find the clients is to go to the streets at night. Who will kidnap you? Who will leave you disabled? Who will murder you? You never know. You are lucky to go back home alive.”

Related: Turkey's LGBT community is fighting for acceptance through the ballot box

“We used to find clients over websites. It gave us some control and allowed us to vet them. But now those websites are censored,” says Cansel Karagoz, a trans sex worker, who attended the beauty pageant in Istanbul as a spectator to support her friends.

“Now, all we can do to find the clients is to go to the streets at night. Who will kidnap you? Who will leave you disabled? Who will murder you? You never know. You are lucky to go back home alive.”

In the face of severe discrimination and exasperating economic difficulties, the trans community in Istanbul faces the risk of impoverishment, rendering them even more vulnerable to hate crimes.

“I started to organize these [beauty pageants] to boost acceptance and visibility. ... We have so much beauty and talent in this community that I wanted to share with the world. They cannot end us by killing us.”

“I started to organize these [beauty pageants] to boost acceptance and visibility,” says Bal, who sees these contests as a symbolic victory. “We have so much beauty and talent in this community that I wanted to share with the world. They cannot end us by killing us.” 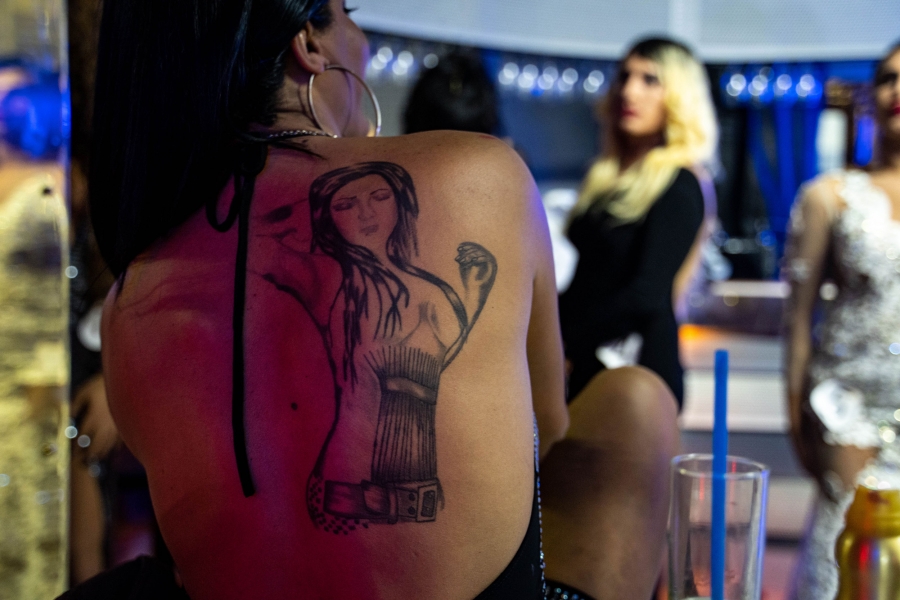 Gozde Bal shows off her tattoo of an idealized woman.

While she continues to grieve friends lost to hate crimes, Bal still gets so much joy out of her life and identity.

“Being a transgender woman in a conservative society doesn’t mean you are always miserable,” she says. “I love my country, my community and my girls. If I could have a second chance in life, I wouldn’t want to be anybody else other than myself.”

Many of Bal’s friends are from more conservative provincial towns. In Istanbul, they find a like-minded and supportive community of fellow trans women and relative acceptance. Despite the manifold shortcomings of LGBTQ rights in Turkey, Bal believes there has been some progress. 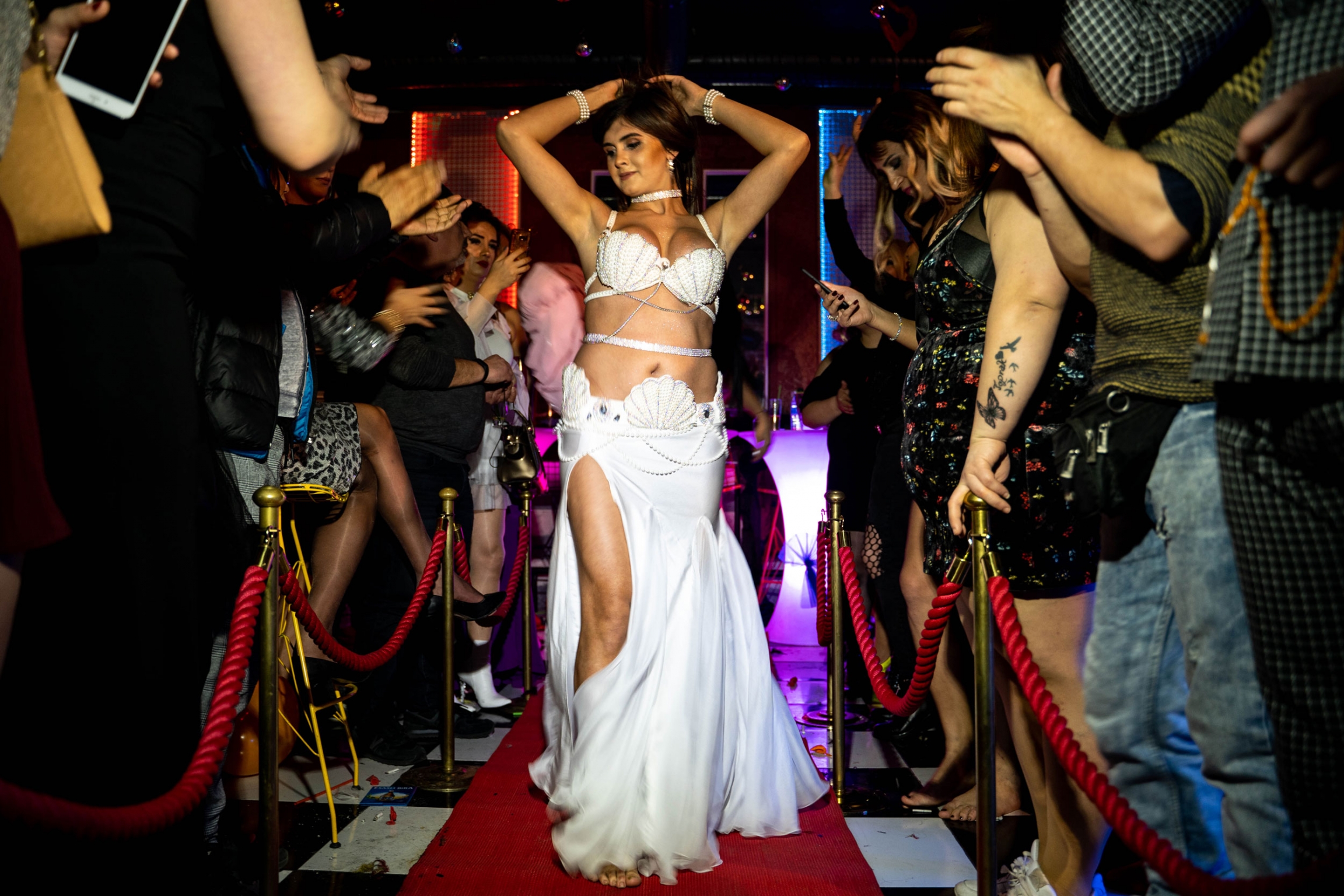 A contestant perfoms on the catwalk.

“Ten years ago, I wouldn’t even dream of organizing an event like this.”

After midnight, following the catwalks and three sets of clothing changes, Bal announces Akay as the winner of the pageant and crowns the 25-year-old sex worker.

“Finally, I am a certified queen,” Akay laughs. Rainbow-colored neon lights glisten on her faux-diamond crown and on her moist eyes.

However, she already knows that this is no Cinderella story. “It’s flattering, of course,” she says. “But honestly, I don’t think much will change in my life.” 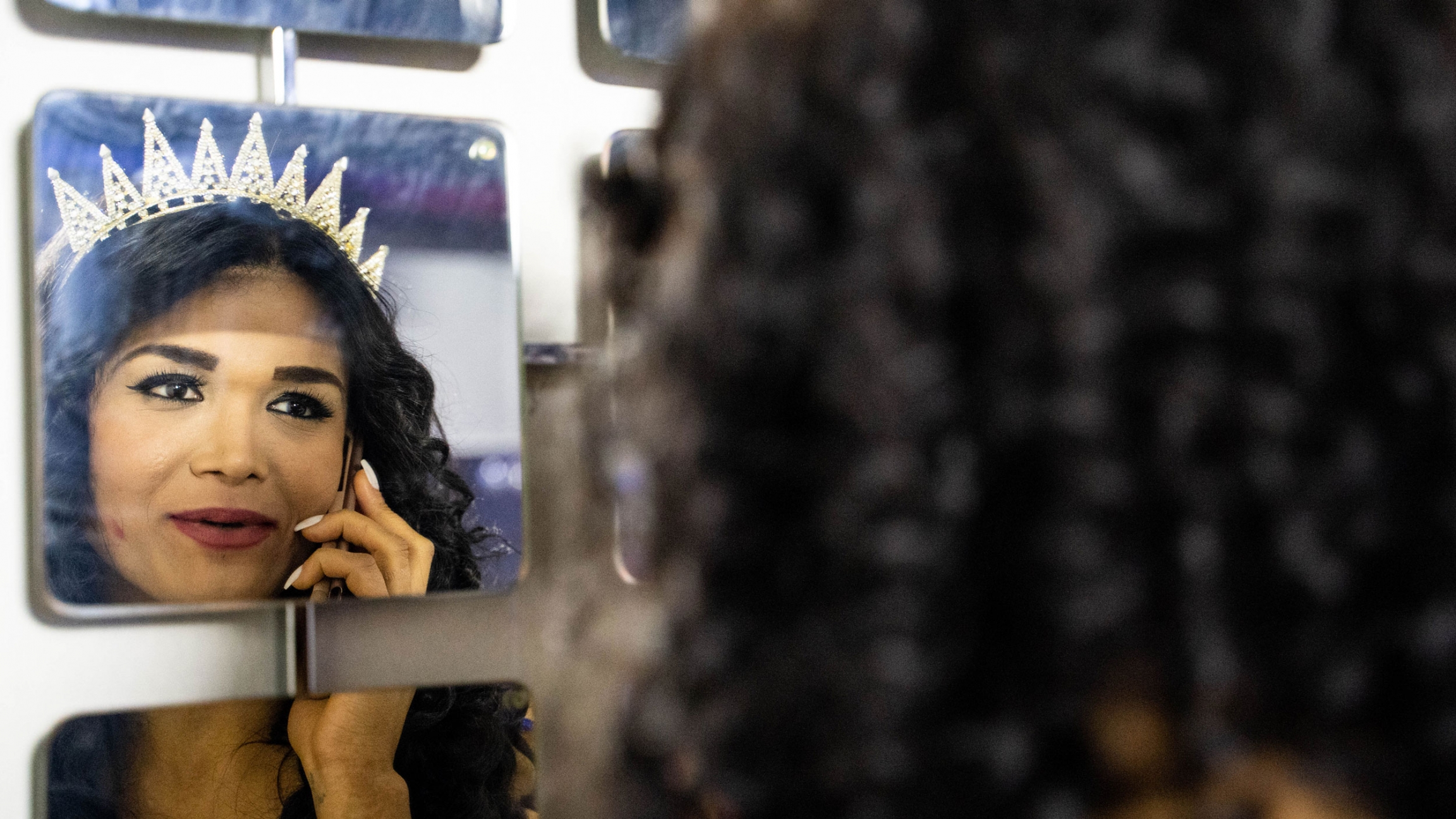 Didem Akay, on the phone with her family, gives them the news that she won the pageant.

On most other nights, she will still be in the streets, in search of clients. She doesn’t know if one day, the hate that killed her best friend will take her too.

“I just wish Hande was here with me tonight,” adds Akay. “She was my queen. I thought of her all night.”

Editor's note:  On July 22, 2019, just about a month after this article was published, Didem Akay sadly died by suicide. She succumbed to mental health issues that stemmed from transphobic abuse and the intense grief she felt at having lost her best friend to a hate crime. A fierce activist for LGBTQ rights, her passing devastated her community and made national news in Turkey. She's survived by her parents and her brother and was put to rest in her hometown of Izmit.

If you or someone you know is experiencing suicidal thoughts, text the Crisis Text Line at 741-741 or call the US-based National Suicide Prevention Lifeline at 1-800-273-8255.