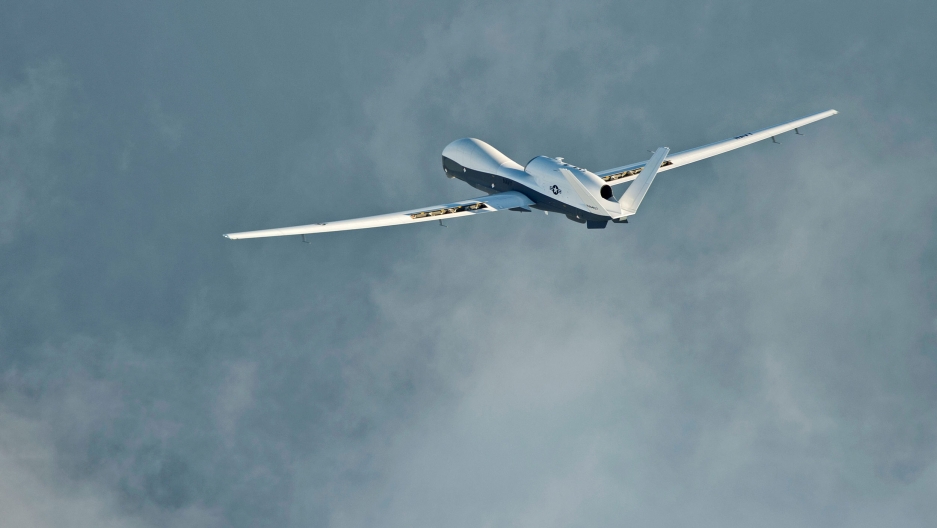 Iran on Thursday shot down a US military drone it said was on a spy mission over its territory but Washington said the aircraft was targeted in international air space in "an unprovoked attack."

The incident fanned fears of wider military conflict in the Middle East as US President Donald Trump pursues a campaign of to isolate Iran over its nuclear and ballistic missile programs and role in regional wars.

It was the latest in an escalating series of incidents in the Gulf region, a critical artery for global oil supplies, since mid-May including explosive strikes on six oil tankers as Tehran and Washington have slid toward confrontation.

Iran has denied involvement in any of the attacks, but global jitters about a new Middle East conflagration disrupting oil exports have triggered a jump in crude prices. They surged by more than $3 to above $63 a barrel on Thursday.

Tensions flared with the US pullout last year from world powers' 2015 nuclear accord with Iran and have worsened as Washington imposed fresh sanctions to throttle Tehran's vital oil trade and Iran retaliated earlier this week with a threat to breach limits on its nuclear activities imposed by the deal.

Upping the ante, Washington said on Monday it would deploy about 1,000 more troops, along with Patriot missiles and manned and unmanned surveillance aircraft, to the Middle East on top of a 1,500-troop increase announced after the May tanker attacks.

Sepah News, the website of Iran's elite Revolutionary Guards Corps (IRGC), said the "spy" drone was brought down over the southern Iranian province of Hormozgan, which is on the Gulf.

The semi-official news agency Fars said the Guards used the locally built "3 Khordad" missile system, which Iran had unveiled five years ago, to destroy the drone.

A US official said the drone was a US Navy MQ-4C Triton and that it had been downed in international air space over the Strait of Hormuz, through which about a third of the world's seaborne oil exits the Gulf.

Navy Captain Bill Urban, a spokesman for the US military's Central Command, said Iran's account that the drone had been flying over Iranian territory was false.

"This was an unprovoked attack on a US surveillance asset in international air space," Urban said. The drone, he added, was downed over the Strait of Hormuz at approximately 2335 GMT — in the early morning hours of local time in the Gulf.

Independent confirmation of the drone's location when it was brought down was not immediately available.

A Revolutionary Guards statement said the drone's identification transponder had been switched off "in violation of aviation rules and was moving in full secrecy" when it was downed, Iranian state broadcaster IRIB reported.

The Iranian Foreign Ministry condemned what it called a violation of Iranian air space by the drone and warned of the consequences of such "illegal and provocative" measures.

Iran sends 'clear message' to US

Brigadier General Hossein Salami, commander in chief of the Revolutionary Guards, warned against any aggression and said the drone's downing carried a "clear message" to Iran's arch-enemy.

"Our air space is our red line and Iran has always responded and will continue to respond strongly to any country that violates our air space," Ali Shamkhani, secretary of the Supreme National Security Council, told Iran's Tasnim news agency.

The MQ-4C Triton's manufacturer, Northrop Grumman, says on its website that the Triton can fly for over 24 hours at a time at altitudes higher than 10 miles, with an operational range of 8,200 nautical miles.

It was not immediately known whether the Triton was armed — like drones that have been used by the US military to eliminate al-Qaeda militants in Yemen's conflict.

The Trump administration sought on Wednesday to rally global support for its pressure on Iran by displaying limpet mine fragments it said came from an oil tanker damaged in the June 13 attacks, saying the ordnance looked Iranian in origin.

European diplomats have said more evidence is needed to pinpoint responsibility for the strikes on the tankers.

The US sanctions net draped over Iran, designed to reduce its lifeblood oil exports to zero and sever it from the dollar-dominated global financial system, have wrought severe damage to Iran's economy.

Trump has sent forces including aircraft carriers, B-52 bombers and troops to the Middle East over the past few weeks. Iran said last week it was responsible for the security of the Strait of Hormuz, calling on American forces to leave the Gulf.

Tehran has also said it will shortly suspend compliance with the nuclear deal's curbs on its uranium enrichment, meant to block any pathway to nuclear weapons capability, and threatened to disrupt oil shipments through the Strait of Hormuz.

Iran's clerical rulers have rejected as "warmongering" allegations by the United States and its regional ally Saudi Arabia that Tehran perpetrated the tanker attacks.

But Trump and Iran's top authority, Shiite Supreme leader Ayatollah Ali Khamenei, have both said they have no interest in starting a war.

Heightened US-Iranian tensions have also stoked concerns about increasing bloodshed in countries where Iran and its Gulf Arab regional rivals have long been locked in proxy battles for predominance in the Middle East.

Trump says the 2015 nuclear accord signed by his predecessor Barack Obama did not do enough to curb Iranian interventions in other Middle East affairs or curb its ballistic missile program.

The Islamic Republic says its development of ballistic missiles and its regional activities are defensive in nature.

Tehran said on Monday it would breach uranium enrichment limits in 10 days, but added that European signatories still had time to save the nuclear deal.

Iran has rejected Trump's call to enter talks covering nuclear, missile and other security disputes unless Washington returns to the 2015 deal that lifted global sanctions on Tehran.

Saudi Arabia has also accused Iran of supplying Yemen's Iran-aligned Houthi movement with missiles and drones used in attacks on Saudi oil pumping stations in May and on a civilian Saudi airport earlier this month.

On Thursday, the Saudi-led coalition battling the Houthis in Yemen said a projectile landed near a desalination plant in the Saudi province of Jizan, after Houthi-run Masirah TV said the group had fired a missile at a power plant there.

By Parisa Hafezi and Phil Stewart/Reuters

Additional reporting by Asma Alsharif in Dubai and Stephen Kalin in Riyadh; Writing by Parisa Hafezi; Editing by Mark Heinrich.