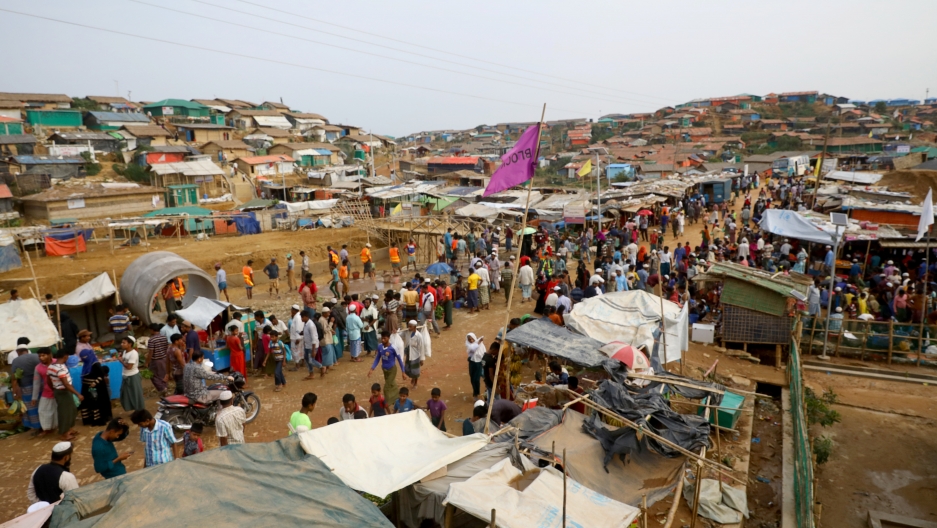 Rohingya refugees gather at a market inside a refugee camp in Cox's Bazaar, Bangladesh.

The United Nations is condemning itself over its handling of the crisis involving Myanmar's Rohingya minority. Over the past decade, nearly 1 million Rohingya have escaped violence and persecution in Myanmar. The mass exodus attracted worldwide attention and criticism over the UN's role.

UN Secretary-General António Guterres called for an independent review covering eight years of the UN's response to the crisis. The report, which came out this week, concluded that while Myanmar's government was mainly responsible for the human rights abuses, the UN had systemic failures that shared responsibility.

John Sifton is the Asia advocacy director for Human Rights Watch. He shared his thoughts with The World's Carol Hills about what exactly went wrong with the UN's handling of the Rohingya crisis.

Carol Hills: John, according to the review, what did the UN get wrong?

John Sifton: The United Nations made several of the same errors that they've made in previous catastrophes. They've failed to elevate human rights concerns to the leadership level and buried information that humanitarians on the ground had gathered at great risk. Keep in mind, this is the second time there's been a report like this in the context of a mass killing. If the UN is ever going to fix these problems, it has to hold people accountable for their individual failures.

When was the first time this happened?

The reason that this is such an unpleasant deja vu is because a similar— and much more scathing — report was issued after the 2009 violence in Sri Lanka that claimed the lives of tens of thousands of people at the end of Sri Lanka's civil war. That report was even more scathing than this report and resulted, unfortunately, with no serious reforms.

This review is pretty scathing. It uses terms like "obviously dysfunctional performance," "a culture of mistrust" and "mixed and incomplete signals coming from the field." Can you be more clear on what happened here? Do people go to a supervisor and say, "This is what's going on the ground," and then the supervisor just ignores it? What was happening?

The UN It's not a monolithic institution. There are separate agencies and what essentially happened here is that key officials at certain departments, like the people tasked with the humanitarian and emergency response and the people tasked with human rights, had their inputs ignored or suppressed by what they call the coordinator on the ground. That was resulting in poor information flowing into New York at the leadership level.

Why was this happening? Why was the information not being passed on?

It's a systemic problem, not just for the United Nations, but within the humanitarian world. Because of the quest for access to populations with needs, everything is sacrificed. We will censor ourselves and we will go soft on this country so that we can preserve our access to those vulnerable populations that need. Now, it's understandable that there's desire to get access to populations in need, but it can't come at the larger expense of being strong on human rights. That is the lesson of Sri Lanka that was disregarded in this [context]. That is the lesson of the past that they failed to heed in Burma.

Related: A spoken word poet in Myanmar speaks out against hate and injustice

What were the consequences of that?

The consequences are that you now have a situation where Burma has learned that they can be recalcitrant and obdurate and get away with it. It's been asked if others are to blame and absolutely the United Nations is not alone. Member states who were concerned about the killings failed to press the United Nations and many countries, although they spoke about their outrage at what was going on, failed to bond together and lay down tough terms to the Myanmar government. They needed to say, "If you don't start cooperating with the United Nations there are going to be real-world consequences: sanctions, travel bans and the like." So, it's not just the UN, it's the UN and its member-states that failed to hold Burma's feet to the fire.

So, what now? We've got this information, how do we avoid this happening again?

The real lesson is that individual UN staff who suppress human rights reporting and fail to allow human rights investigators to properly brief the leadership need to be held accountable and not promoted or not shuffled into a new post at some other country, but fired.