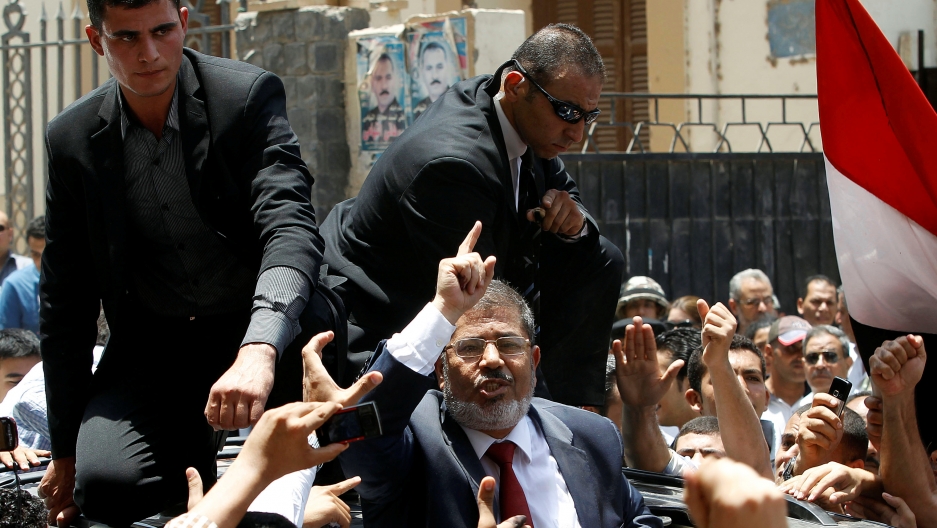 Mohammed Morsi, former president of Egypt, waved to his supporters after casting his vote at a polling station in a school in Al-Sharqya, 37 miles northeast of Cairo, on June 16, 2012.

When Egyptians poured into the streets of Cairo back in 2011, Hend Nafie was excited.

"I was hoping for personal freedom," she said. "I wanted to be free. I wanted my family to accept me [as] who I am."

Nafie grew up in a conservative family in a village in the Nile Delta. She says her family was strict. Her parents didn’t want her to go to school or make any decisions for herself.

"So, when I participated in the revolution, it was the first time that I feel like I did something I really wanted," she said.

Thousands of people like Nafie participated in the demonstrations that rocked Egypt during the Arab Spring — young, passionate men and women who were fed up with the old system. Within weeks, they brought down Hosni Mubarak, the dictator who ruled Egypt for 29 years. After that, it was time to vote.

"After there were democratic elections, Mr. Morsi emerged victorious as Egypt’s first and only, ever, last, democratically elected president," said Samer Shehata, professor of Middle East studies at the University of Oklahoma.

"When they saw other people putting their hats in the race, including former Mubarak elements, and leaders, they decided they had no choice but to run a candidate," Shehata explained.

Their choice was a man called Khairat al-Shater, an engineer and a businessman. But Shater was disqualified, and the Muslim Brotherhood put forward Morsi as its candidate.

"[Morsi's] nickname at the time was the 'spare tire candidate' because he was really not on anyone’s agenda."

"His nickname at the time was the 'spare tire candidate' because he was really not on anyone’s agenda," Shehata said.

That's how Morsi found himself running a country that was experimenting with democracy for the first time. There were aspects of his character that people liked, says Shehata, who met Morsi a few times.

"He really was a man of the people in one sense. He wasn’t overly cosmopolitan. He certainly wasn’t elitist; I’m sure he preferred tea to cappuccino or lattes or anything like that," he said.

But for Nafie, who protested during the Arab Spring, Morsi never delivered on what Egyptians like her wanted. She had hoped he would support protesters who’d been arrested, imprisoned and tortured. She was one of them. But Morsi ignored the human rights abuses, she says.

"He didn’t try to unite people, and...his regime...committed a lot of violations," she said.

Morsi went on to make other controversial decisions, says Michele Dunne, director with the Carnegie Endowment for International Peace. Six months into his presidency, Morsi came out with a plan for a new constitution "very much over the objections of most of the non-Islamist political figures in the country."

It was seen as a power grab by him and the Muslim Brotherhood. Protests ensued.

On July 3, 2013, only a year after Morsi became president, he was deposed in a military coup. Morsi spent the next six years in prison — mostly in solitary confinement.

"In his six years of imprisonment, he had exactly three family visits that lasted half an hour each," said Sarah Leah Whitson, who is with Human Rights Watch.

She says Morsi was suffering from diabetes and other health problems. "When he appeared before judges, he repeatedly asked for medical treatment, medical care, to see a specialized medical clinic," she said.

Human Rights Watch and others raised alarms when it became clear that Morsi wasn’t getting the medical attention he needed. In 2018, a group of British politicians reported that Morsi was being kept in solitary confinement for 23 hours a day, with just one hour allowed for exercise.

On June 17, 2019, exactly seven years to the day that he was elected president, Morsi collapsed in a courtroom in Cairo and later died.

But their calls went unheard, and on June 17, 2019, exactly seven years to the day that he was elected president, Morsi collapsed in a courtroom in Cairo and later died. He was 67 years old.

Dunne, of the Carnegie Endowment for International Peace, says Morsi’s death is tragic, but we shouldn't lose sight of the bigger story. "We’re seeing hundreds of deaths inside Egyptian prisons every year, some of them from actual abuse, mistreatment, torture, and others from bad conditions or denial of treatment," Dunne said.

So, is this the end of Egypt’s experiment with democracy?

Shehata of the University of Oklahoma doesn’t think so: "It’s not Egypt’s last or only chance at democracy but it was an excellent opportunity for democracy."