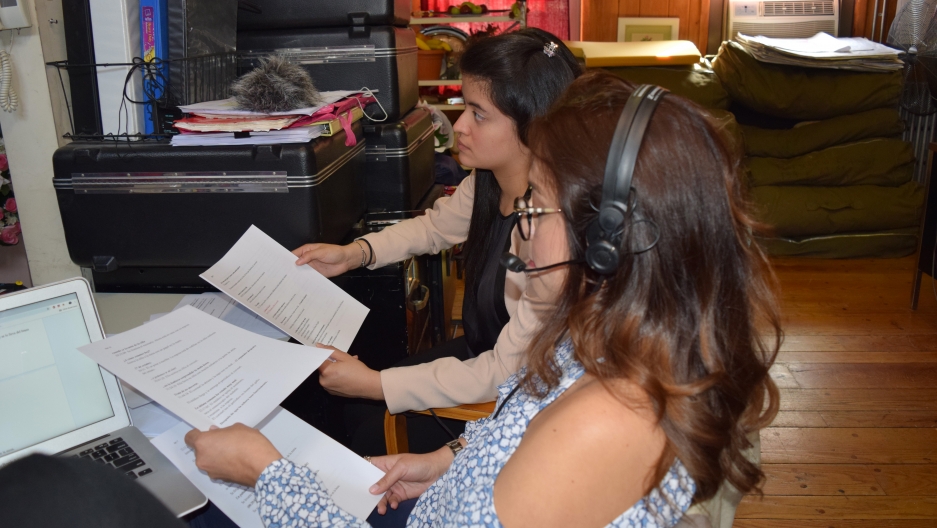 Audio description has changed how many people with visual impairments experience going to the movies.

The accessibility service, which has been available for decades on VHS, DVD and on some television networks, is an embedded voice track that briefly explains visual imagery and action. It also reads out text or subtitles during dialogue breaks. But it has only been since 2017 that all US movie theaters became legally required to offer audio description to guests who are blind or have low vision.

Many cinemas now provide this feature via a pair of headphones and a small transmitter box that receives the descriptive narration that’s in sync with the film.

Related: How balloons gave a blind South Korean artist his life back

For people like Nefertiti Matos, who’s in her 20s and has been blind since childhood, the availability of this service means they no longer need to rely on others to explain what’s happening on screen.

“It used to be that I would have my parents describe to me what’s going on, or the friends I was with,” says Matos. “That’s a thing of the past now.”

While the greater availability of audio description at movie theaters is a step toward improved inclusion, it’s so far only a monolingual enhancement and leaves out many non-English speakers from experiencing this kind of independence.

Matos, who is an assistive technology trainer at the New York Public Library and grew up in a Spanish-speaking household, says accessible media in other languages is “up-and-coming” but is still “not even close” to what English-speakers have access to.

And she’d like to see more attention given to making audio description available in the US’ second-most widely spoken language — Spanish.

“Spanish-speaking folks are already marginalized and then you add the visual impairment to it,” Matos says, adding that for those who have progressively lost their sight, the inability to consume media like they used to often makes them feel like “their world is closing in around them.” 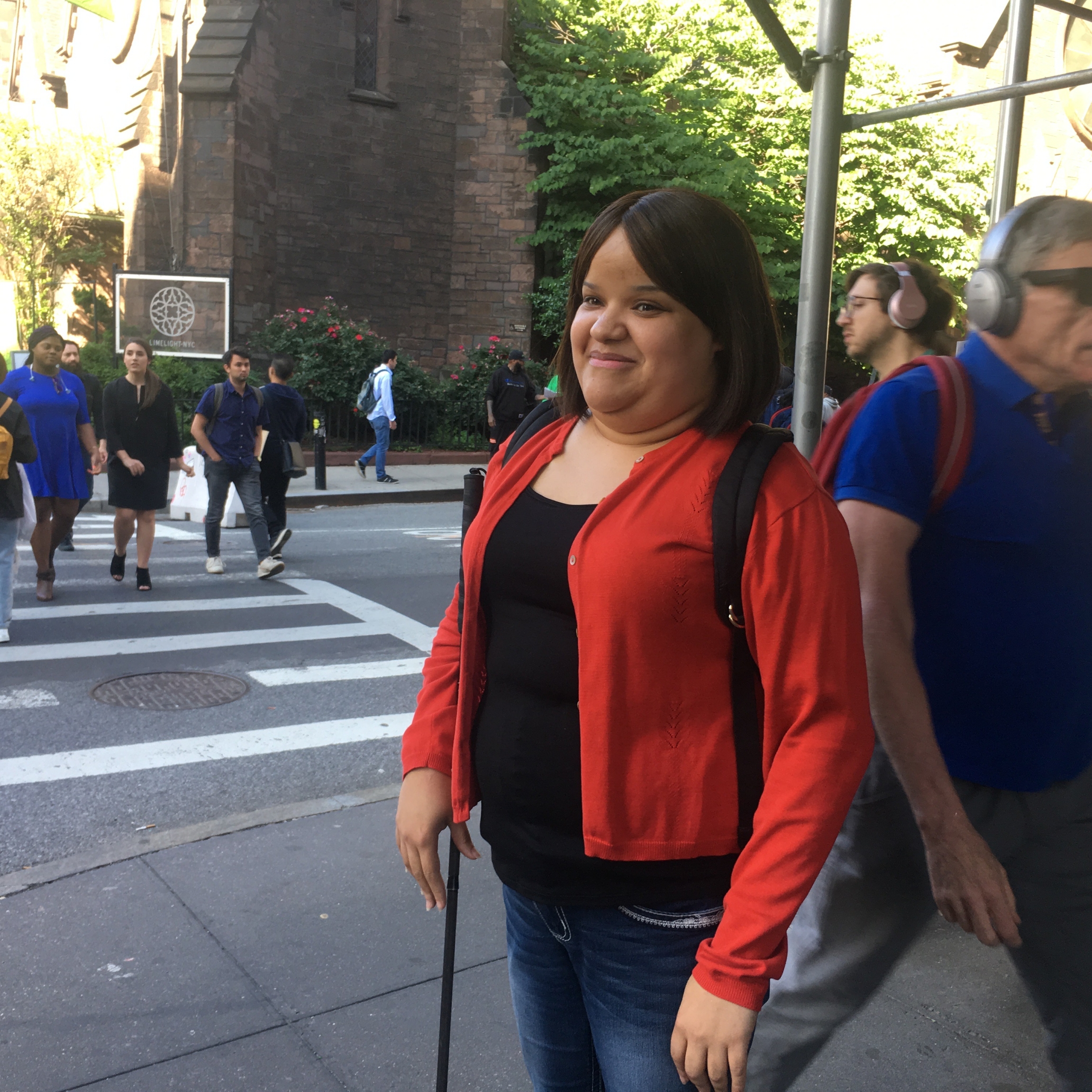 In a 2010 report, the National Eye Institute found US Latinos have a higher rate of losing vision than non-Hispanic whites. Other studies indicate that this demographic is at increased risk of developing glaucoma, which can cause blindness.

Latinos are the country’s fastest-growing demographic group and, coupled with these visual-health concerns, there is an increased demand for assistive media, including audio description, in Spanish.

An attempt to bring down this accessibility language barrier is already underway.

Students at New Jersey’s Montclair State University learned in a new course this year how to write and produce audio description in Spanish.

The program was developed by María José García Vizcaino, who learned about audio description through her legally blind sister in Spain and recognized its potential to be taught as a type of interpretation.

“It’s a translation not from one language into another, but from one medium to another.”

“It’s a translation not from one language into another, but from one medium to another,” explains García Vizcaino. “You are going to translate from the visual medium into the aural.”

A class project during the spring semester involved creating the descriptive track for a short film by Spanish director Javier Fesser.

García Vizcaino says one challenge for her students was writing audio description that could quickly be spoken in between the movie’s dialogue, because Spanish is “not as concise and more abstract” than English.

And because many of her students are heritage speakers of several Spanish variants, making the correct “lexical choice” presented more teachable moments.

“There was one scene that the main character threw something into the garbage, so one of them said one word that in the Dominican Republic, they say garbage that way, and then another — no, no, in Colombia we say that way,” she recalls. “I said you know what, none of them work because in Spain no one knows those words.”

García Vizcaino’s class also partnered with New York’s Repertorio Español to introduce Spanish-language audio description to live theater during a performance of “El Coronel No Tiene Quien Le Escriba” (“No One Writes to the Colonel”), a play adapted from a novel by Colombian writer Gabriel García Márquez. 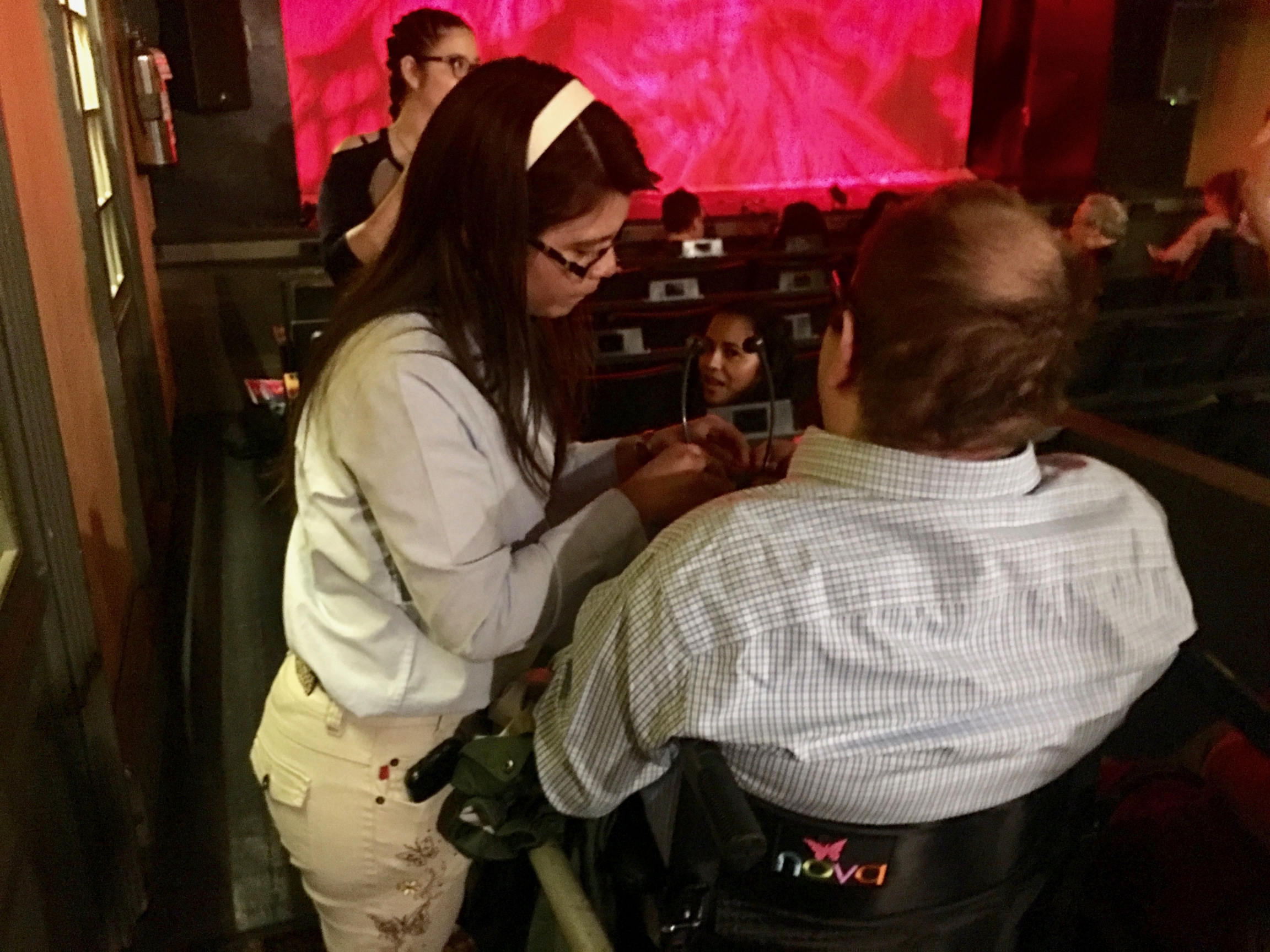 Unlike movie theaters, not all playhouses are obligated to offer this service.

Organizers of the Spanish-language trial run say it was a first for any theater on or off Broadway.

Watching the show on a black-and-white monitor from inside the theater’s costume room, graduate student Vanessa Carrillo described the action on stage for the dozen visually impaired audience members wearing headsets.

Related: How do you make walking easier for people who are blind? Put submarine tech in a cane.

“That was my first time in a theater,” 58-year-old Saeed Golnabi said after the show, adding that because of his blindness he’s only been to a movie theater a couple of times in his life.

But Golnabi says that could change now that audio description is more available.

The New York Public Library’s Nefertiti Matos was also in the audience for what she hopes is not a one-time-only event.

“For Spanish speakers, we love entertainment,” she says. “ If you offer it, we will come.”

Matos adds that her Spanish-speaking mother, who also attended the performance, normally would play the role of visual translator. But this time, they both could appreciate all aspects of the show and in the same language.

“She was witnessing me experiencing it fully on my own,” Matos says. “I think she enjoyed my enjoyment.”