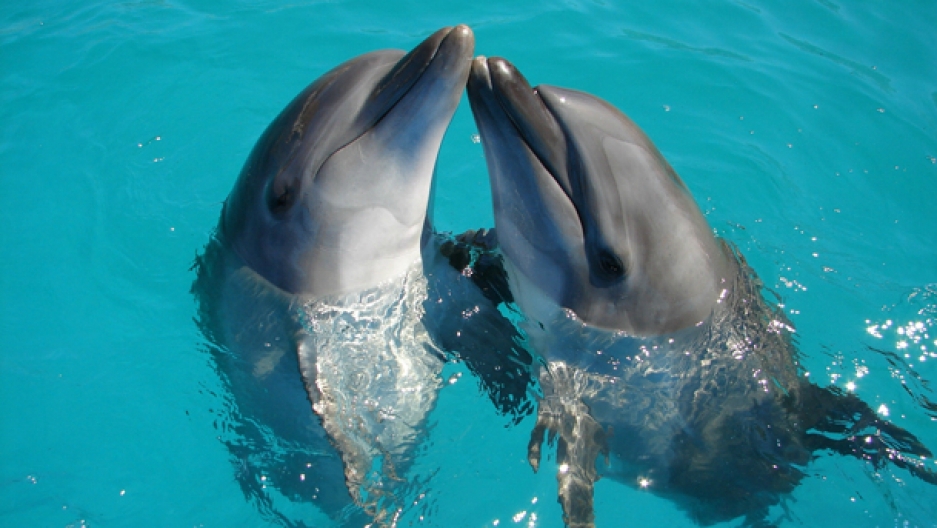 Bottlenose dolphins learn language the same way humans do: they begin by babbling. Gradually, they learn the rules of their language and by 20 months, their communication patterns conform to the same language laws as adult human speech.

In 1945, George Zipf, a linguist, discovered that every human language he studied had at least one feature in common, a phenomenon he named Zipf’s law.

That got Laurance Doyle, an astronomer for the SETI Institute (Search for Extraterrestrial Intelligence) and president of PlanetQuest, wondering if Zipf’s law could be applied to non-human languages. But for this research, Doyle began looking much closer to home, at the animals on our own planet.

"We decided to start with bottlenose dolphins and humpback whales because they're intelligent, they're socially complex and they both use tools."

"We decided to start with bottlenose dolphins and humpback whales because they're intelligent, they're socially complex and they both use tools,” Doyle explains. “But, also, they put most of their communication in audio. Unlike [studying] chimpanzees, we wouldn't have to try and interpret gestures or facial expressions.”

So far, Doyle has found that Zipf's law does apply to humpback whales, at least in part. “We are still investigating humpback whale song, but as far as we know, their social calls obey Zipf's law and their feeding calls don’t,” he says.

Humpback whales use three kinds of vocalizations, Doyle explains. One is the singing they do in the waters near Hawaii. The other two are social calls — when they’re “talking instead of singing,” Doyle says — and feeding calls. He compares whales’ feeding calls to a cowboy who is herding his cows. While he’s talking to his friend, he’s also shouting “Hya, hya, hya!” “You would say ‘hya’ is a sound he's making along with the others, but it's a herding call. It's not a social vocalization,” he explains.

Doyle found that when noise is introduced, it slows down the whales' social talk, but speeds up their herding communication. Again, he imagines a cowboy trying to speak to his friend. His friend would shout “What did you say?" over the noise and the first cowboy would have to repeat what he just said. But they would still shout “Hya, hya hya” and do so more often.

“That's what we found with humpback whales,” he says. “What we think is a herding call speeds up in the presence of boat noise and what we think are social calls slow down.”

Even more interesting, Doyle and his colleagues found that in the presence of noise, the whales can communicate effectively using 60% fewer vocalizations. This was a puzzle.

“They're herding herring and they're making nets of bubbles and it's important they get the whole message. How can they do this with only 60% of the message?” Doyle’s team wondered.

Finally, they realized that whales, like humans, must have something equivalent to grammar, syntax and spelling rules because the only way they could accomplish this is by filling in the missing pieces.

Finally, they realized that whales, like humans, must have something equivalent to grammar, syntax and spelling rules because the only way they could accomplish this is by filling in the missing pieces. “They're going, 'I get the gist of it,’” Doyle explains. “And the only way they could say that is if there are rules. So, we went looking for rules and structure in humpback whales and we found it.”

It’s the equivalent of a text message or a Twitter post in which people drop unnecessary words, like articles and prepositions, but everyone can still understand what’s being said.

Dolphin communication obeys Zipf’s law, but also in a rather interesting way, Doyle says. Like human babies, dolphin babies babble when they are young, trying out different “phonemes” and trying to learn the language. At this stage, their communication does not follow Zipf’s law. Instead of a 45-degree slope, the word distribution on the graph is much flatter.

Doyle recorded two baby bottlenose dolphins born at Marine World and found they did not obey Zipf's law until they were 20 months old. The distribution of their whistles landed exactly on the same slope as a human baby’s babble, he says.

“You expect a baby babbling not to obey Zipf's law because they're making kind of random sounds. They’re trying out a new language,” Doyle explains. “We were able to mathematically prove that baby dolphins are born babbling and they learn their whistle language the same way humans do.”

"There's a continuity of complexity in the communication systems of all the species on Earth."

Doyle says “there's a continuity of complexity in the communication systems of all the species on Earth," including plants. In fact, he wrote a paper on how a certain cotton plant sends “an air traffic control communication” to a certain wasp to tell it what plant to land on.

“In other words,” he says, “everything around us is communicating like crazy. I’m trying to get us not to stare up at the stars and say, 'Are we alone’ when dolphins are tugging at our pants, saying, 'Habla español,’ you know? ‘Parlez-vous français?' We've really got to quit staring off [into space] for intelligence. We need to recognize it here.”